13/10/2022 - François-Xavier Branthôme - Architecture of Trade - Lire en français
Globally, trade is down, but 5% up on the pre-Covid period
After two exceptional marketing years in more ways than one, 2021/2022 was a year of adjustment; for a variety of reasons, global operations have shown signs of slowing, while maintaining levels well above those of the pre-Covid period. 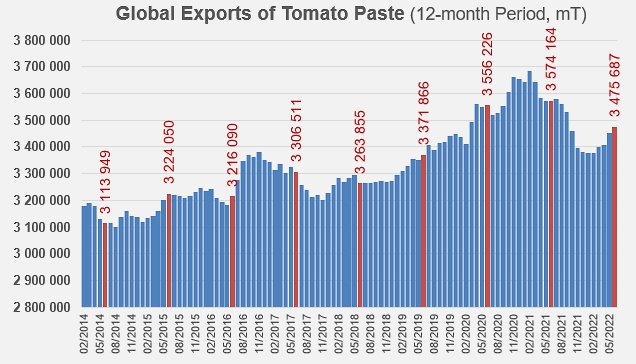 As we have already had occasion to mention (see our related articles below), this latest marketing year has confirmed a number of national trajectories. Chinese results, although the country is leader in the paste category, recorded a further decline, putting them well below the levels of the previous year (-6%) but also of the pre-Covid years (-8%). Over the last five years (i.e. since 2016/2017), Chinese operations have been declining at a CAGR of -0.9% per year. US exports of paste, although they increased slightly during the pandemic, were 13% lower in 2021/2022 than before the health crisis. Over the past five years, US foreign sales have contracted at an average annual rate of -4.6%. The situation is even more worrying for the Iranian industry, whose exports fell in 2021/2022 by 35% compared to their average level of the last three years (2018/2019 – 2020/2021), but especially by 17% compared to their average level before Covid. Iran's commercial trajectory over the last five years has followed a strong downward trend, at an average CAGR of -7% per year.
In the case of Ukraine, the result of the marketing year shows something of the gravity of the impact of last February's Russian invasion. Total estimated activity for the last four months of the marketing year (March-June 2022, approximately 2,600 mT) fell by approximately 85% compared with the corresponding periods of previous years, whereas the first eight months of the marketing year had shown an increase of 3% over the previous year and 72% compared with the pre-Covid period.

But the 2021/2022 marketing year has also confirmed the good performance of exports of several leading industries such as Italy, whose result shows a 5% increase compared to the period before Covid, Portugal (+4% compared to the same period), Spain (+14%), and especially Chile (+23%), Greece (+37%) and Turkey (+89%). 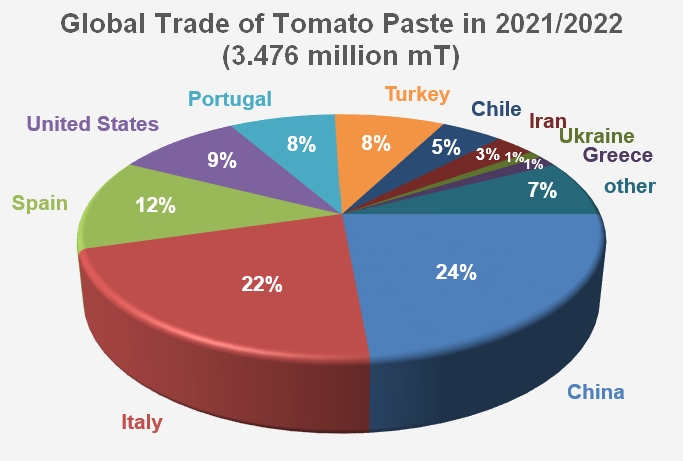 The main players of this marketing year were Chinese and Italian products, which together accounted for a little more than 45% (1.58 million mT) of total operations. But Spanish, Californian, Portuguese and Turkish pastes also played a role, with a total (about 1.29 million mT) accounting for a little more than 37% of the exports recorded over the year, supplemented by quantities mobilized by Iran, Ukraine and Greece (188,000 mT in total, i.e. about 5% of worldwide trade in 2021/2022). The operations of "other countries" involved approximately 261,000 mT of pastes, i.e. 7.5% of the quantities shipped during the year.

However, it is clear that the influence of the leading industries is slowly but steadily being eroded. While exports from all TOP10 countries fell by the same amount as overall operations over the 2020/201 marketing year (-2.8%), the increase compared to the pre-Covid period has been less spectacular (+3.7% instead of 5%). At the same time, export operations from "other countries" declined by only 2.5% compared to the previous year, but increased by almost 22% compared to the period before Covid. In short, over the last five years, the annual level of activity of the TOP10 has grown more slowly (0.8% per year) than overall activity (1% per year) and especially less quickly than the activity of the industries that are not part of the TOP10 list (+4%).

These different dynamics, aggravated by weather issues, have resulted in a weakening of the position of the TOP10 industries, which in 2021/2022 accounted for "only" 92% of overall export activity, whereas they held nearly 96% in 2007/2008. 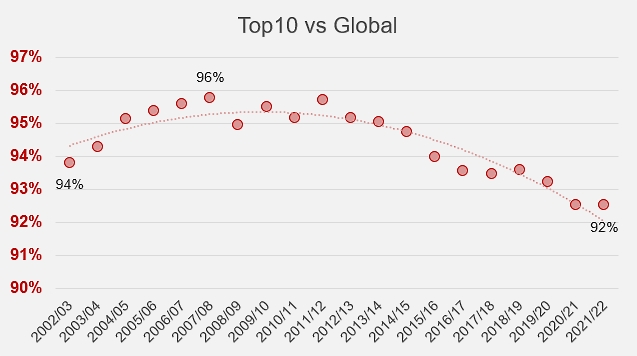 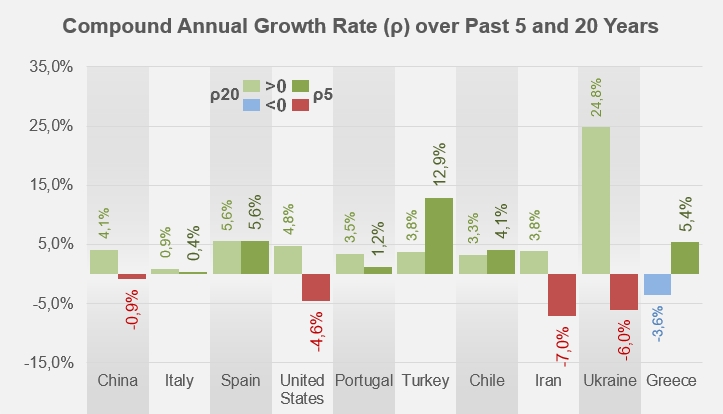 Distribution of monthly exports of pastes over the last ten years.

The value of the TOP20 import markets