The US East Coast port congestion that’s tying up ships coming from Asia via the Panama Canal is simultaneously soaking up capacity arriving from Europe. Trans-Atlantic vessel capacity is much more limited than in the Trans-Pacific, with the balance remaining in favor of shipping lines — even more so due to congestion. Consequently, trans-Atlantic spot rates remain historically strong, bucking the global trend. 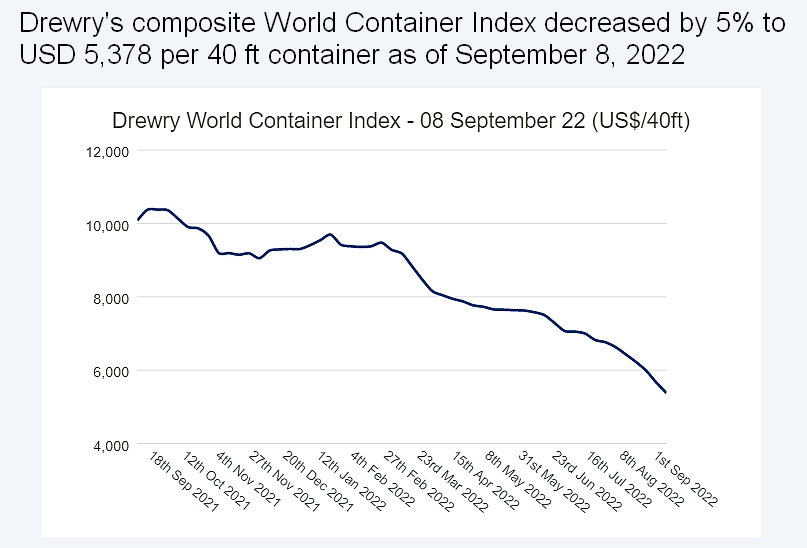 Trans-Pacific prices continue to slide
Some spot indexes showed Trans-Pacific spot rates temporarily plateauing earlier this month, but Trans-Pacific rates have since resumed their gradual slide. There’s no evidence of a floor yet. According to Drewry, an independent provider of research and consulting services to the maritime and shipping industry, weekly assessment for Shanghai-Los Angeles as of August 21 was down 41% year-on-year. Given East Coast congestion, Drewry’s Shanghai-New York assessment fared better, down 28% from the same date last year.
On the same date, the FBX China-West Coast assessment fell to USD 5,533 per forty-foot equivalent unit (FEU), its lowest level in 15 months and down 70% year-on-year. The FBX China-East Coast assessment was at USD 9,150 per FEU, down 54% from the same date last year.

Trans-Atlantic rates stay high after rise
According to the indexes, it was more expensive in late August to move spot cargo westbound across the Atlantic from Europe to the East Coast than it was to move cargo eastbound across the Pacific from Asia to the West Coast — even though the sailing distance across the Pacific is almost twice as long. Drewry’s weekly assessment as of August 21 for the Rotterdam-New York route was USD 6,936 per FEU, up 8% year-on-year. The FBX Europe-East Coast index was at USD 8,522 per FEU, up 44% year-on-year.

Rates still almost five times pre-COVID levels
Even with spot rates falling on most global routes save the Trans-Atlantic, freight pricing remains exceptionally profitable for ocean carriers. Furthermore, shipping lines have at least half of their volume on contracts. According to multiple carriers, annual contract rates are in the vicinity of current spot rates.

Highlighting just how profitable this remains for carriers, rates are far above where they were pre-COVID. Trans-Pacific and Trans-Atlantic spot rates have gone in opposite directions over recent months, yet when compared to pre-pandemic levels, they’ve taken different paths to the same result.

Some complementary data
For further information and details about freight, click here.

2022 Season: about the situation of the agro-industry