16/03/2021 - Sophie Colvine , François-Xavier Branthôme - 2020 Season - Lire en français
Two-thirds of the quantities of tomatoes processed globally in 2020 were handled by the world's TOP50 companies in the sector: nearly 25.3 million metric tonnes (mT) of fresh tomatoes out of a total of 38.6 million mT (65%) were received by the largest 50 companies or groups of companies in 124 processing plants.

The TOP10 companies or group represent on their own 35% of the global volume processed. The biggest of these is The Morning Star Company based in California, which, with 4 million mT in 2020, handled in only three factories more than twice the volume processed by N°2 TunHe in 12 factories in China, and N°3 Sugal in five factories on two continents. 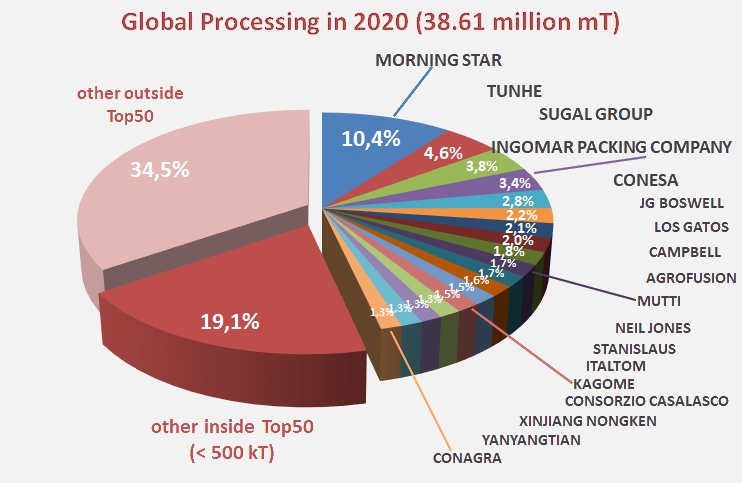 US companies are extremely present in the 2020 TOP50 ranking, with 11 companies and 18 factories that last year processed more than 10 million mT, which means that almost all US operators and tomato businesses are positioned in the very top ranks of the global industry.

The Chinese sector recorded seven groups or companies in this TOP50 of 2020, as well as 26 factories, with 3.25 million mT processed, or just over half of its processing activity last year. The biggest Chinese group in 2020 remained TunHe.

Twenty-five Italian plants, belonging to eight companies or industrial groups, ranked among the 50 biggest in 2020, but any comparison with Chinese operations stops there, since the quantities processed by Italian companies in the TOP50 totaled “only” 3 million mT. Mutti was the biggest Italian processor in 2020.

As for Spain, it positioned seven groups or companies in the TOP50 for the 2020 season, with total processed volumes just exceeding 2.3 million tonnes, a figure that includes some operations that are located outside of Spain’s borders, notably in Portugal, China and the USA. 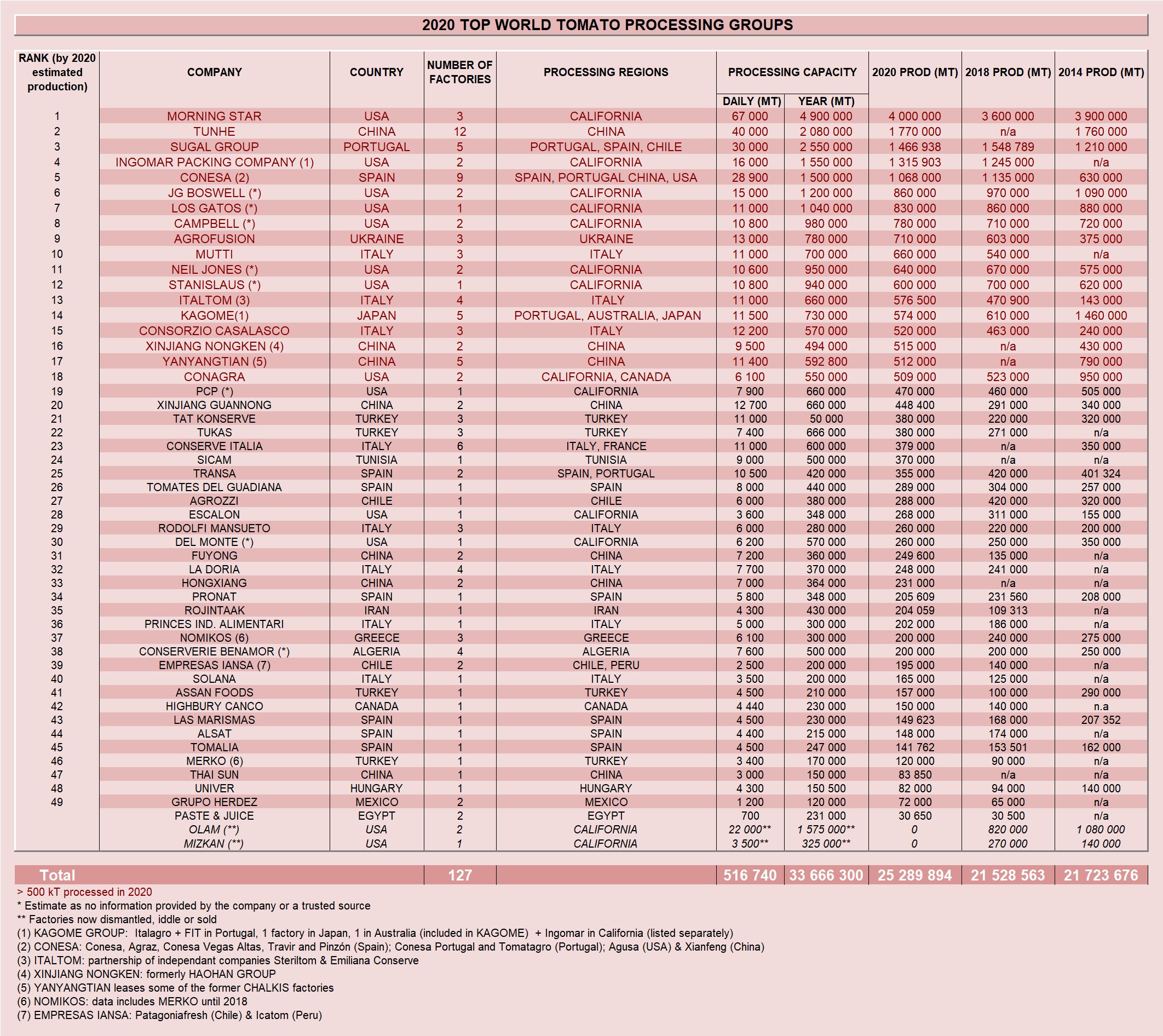 Intercontinental operators remain the exception
This geographical diversification is only true for a small number of processing groups, including Sugal (Portugal), Conesa (Spain), Kagome (Japan), Conagra (USA), Conserve Italia (Italy), Transa (Spain) and Iansa (Chile). Of these, only the first three have an intercontinental reach.

Combined capacity of first 50 companies largely oversized The combined capacity of these first 50 companies or groups (33.66 million mT) appears to be very largely oversized compared to the quantities actually processed: in 2020, the companies of the TOP50 have treated only about 25 million tonnes, leaving practically a quarter of the total industrial capacity unused; seen from another angle, the available capacity of the TOP50 plants alone would have allowed in 2020 to process 87% of the quantities actually processed last year (38.6 million mT).

The Tomato News team contacted all the companies it believes should be listed in the table, but not all replied so we had to use some estimates. If your company is missing from the list or if the information published is incorrect or incomplete, please contact us so we can release an updated table in a few weeks.

Erratum: The number of SUGAL's factories was corrected from three to five on 18/03/2021
Related companies