11/11/2022 - François-Xavier Branthôme - Architecture of Trade
Despite a slight annual decline, the quantities traded are significantly higher than pre-Covid activity levels.

World trade for the sauces category: the boom in second-stage remanufacturing processing
Over the period under consideration (May 2021-April 2022), the sauces and ketchup sector was more buoyant than the canned tomatoes sector, even more so for the leading countries (TOP14) in the industry than for world trade as a whole, and also more so compared to the pre-Covid period than compared to the previous year.
According to official statistics, trade in sauces and ketchup mobilized 1.57 million mT (finished products) in 2021/2022 on a global scale, compared to just under 1.5 million mT during the previous period. Furthermore, with another historical record result, the TOP14 countries alone supplied more than 83% of global shipments, a level far higher than the 80% recorded on average over the previous ten years.

With the notable exception of North America and a few regions with very low consumption figures (South and East Africa, China, the Indian Peninsula), all regions were particularly buoyant in terms of imports over the period under consideration, with an overall annual result of nearly 200,000 mT (+18%) more than during the period preceding the pandemic. Imports from all EU countries increased by nearly 100,000 mT, those from non-EU Europe and Central America by more than 37,000 mT each, those from Eurasia by nearly 23,000 mT, those from Mediterranean Africa by nearly 10,000 mT, etc. A notable exception to this list of countries whose results increased, Canada's supplies pursued their decline begun in 2015/2016, particularly from the United States, which conversely now appear to be an important outlet for Canadian sauces and ketchup production (see also our related articles below).

This year, the position of the world's leading exporter of sauces has been taken by Dutch operators from the USA, which had largely held it for many years: both countries virtually equaled each other over the period running May 2021 to April 2022, with some 304,000 mT of finished products exported by the Netherlands against a little over 302,000 mT shipped abroad by the USA. The volumes involved in this trade flow (a little over 19% of the world market for each of the two leading countries) reflect a spectacular increase of over 58,000 mT (+24%) compared to the previous year for Dutch products, while US foreign sales increased by nearly 8,400 mT and 3% compared to 2020/2021. Dutch growth was built on all its usual outlets (+32,000 mT for EU countries (Germany, France, Belgium, Spain), 13,000 mT for the British market, 16,000 mT for the Turkish market), with however two slight decreases: the Saudi and Australian markets. Thanks to this strong acceleration achieved partly at the expense of the USA, Dutch results recorded an increase of approximately 30% compared to the pre-Covid period (230,000 mT) (see our additional information at the end of this article). Despite a good performance on the Mexican market, US foreign trade in the sauces sector recorded a significant decline, with volumes in 2021/2022 dropping 14% compared to before the pandemic (350,000 mT).
As for Italy, the world's third largest exporter (12%) of sauces and ketchup, the increase in exports reached just over 11,000 mT (6%) and was the result of an accumulation of measured increases on the British, Polish, Israeli and Russian markets, to name only the main ones. Sales on the French market fell back slightly, after two years of strong increases during the pandemic. The 185,000 mT exported by the Italian sector account for an increase of 45% compared to the average results of the three years of the pre-Covid period (2016/2017 to 2018/2019).

After two years of significant increases, Spanish exports of sauces clearly slowed last year: the progressions recorded for supplies to the Moroccan and British markets did not compensate for the declines recorded to destinations such as Cuba, Australia, Italy, the Netherlands and Germany, the latter two being particularly detrimental to Spanish foreign trade. While the latest annual result of nearly 92,000 mT is down by close on 4,600 mT (-5%) compared to the previous period, Spanish operations over the 2021/2022 period are nevertheless 25% higher than before Covid (around 73,000 mT).
Polish operators exported more than 68,000 mT of sauces and ketchup between May 2021 and April 2022, ranking Poland fifth in the world for this category. Polish trade is mainly carried out within the European Community, where the most significant variations were observed in 2021/2022: increases of several hundred tonnes (Czech Republic, Hungary, Slovakia and Romania) have brought to nearly 2,000 mT the gain recorded in the Eastern EU, along with a marked increase in Saudi Arabia. But more pronounced declines in sales to the Emirates and especially to Germany (-6,000 mT) have resulted in a downward trend (-4%) affecting the dynamics that otherwise featured significant group in recent years. However, the Polish result remains better (+7%) than that of the period preceding the pandemic (approximately 64,000 mT).
By improving its previous performance by more than 20,000 mT, Portugal recorded one of the sharpest increases of the year. Essentially based on sales to the two most buoyant markets of the year (western EU and non-EU Europe), the increase in Portuguese foreign sales (+49%) mainly involved exports to the United Kingdom (+13,000 mT), the Netherlands (+5,000 mT) and France (+2,000 mT). There was no significant decrease in Portuguese activity during the period and the annual result (61,000 mT) was 66% higher than the average activity of the period before the pandemic (approximately 37,000 mT).
According to official customs data, Chinese products saw their exports increase by nearly 22% in 2021/2022, due in particular to significant growth on West African markets (Ghana, Côte d'Ivoire, Benin, etc.) and Hong Kong. The annual result reached nearly 41,000 mT, a level 24% higher than that of the pre-Covid period (approximately 33,000 mT).
Canadian exports are almost exclusively shipped to the large neighboring US market. As mentioned previously, an exceptional increase in the level of operations was recorded over the past year, with sales (36,000 mT) almost doubling between the last two reference periods. For the record, Canadian exports of sauces and ketchup amounted to approximately 8,200 mT before the pandemic. 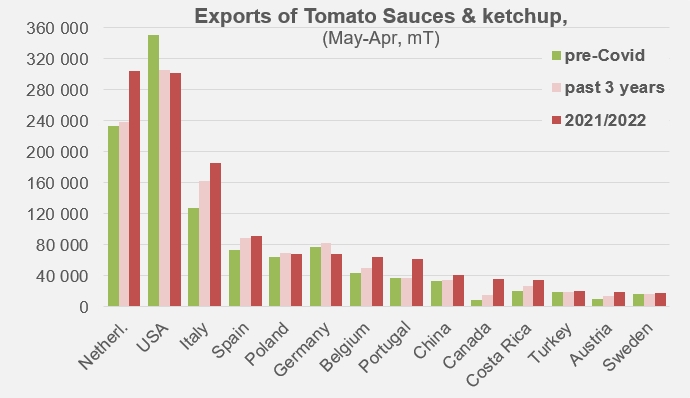 Trade in 2021/2022 is clearly still marked by the dynamics that emerged during the pandemic. More than thirty months after the beginning of the crisis and after two years featuring an exceptional intensification of trade flows that literally dried up stocks, it seems that the consumption behaviors and the geography of demand that appeared during the first months of the health crisis still remain, while their initial causes – repeated confinements and other forms of restriction – have practically disappeared. Results for 2021/2022 are 8% higher than over the three years preceding the pandemic: perhaps the future will tell whether this crisis has indeed defined a new "steady state" for annual global trade.

Some complementary data
Sauces and ketchup (210320...)
Quantities of tomato sauces and ketchup exported between May 2021 and April 2022 by the fourteen main exporting countries operating in the category, to the sixteen importing regions. 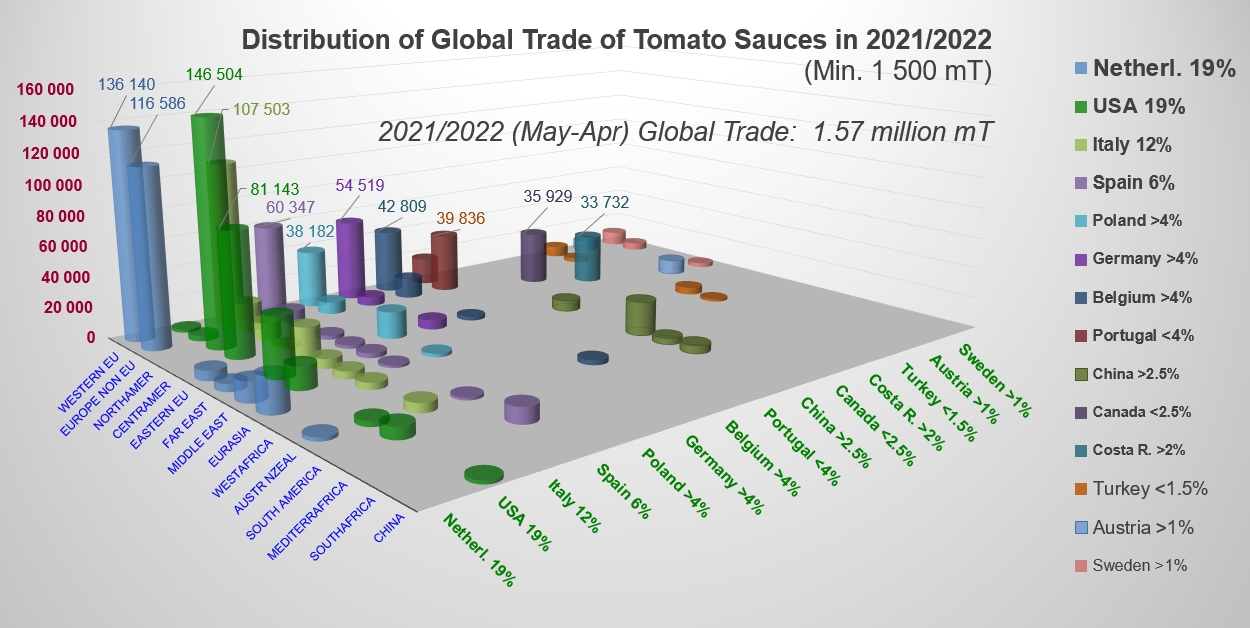 Recent evolution of the market shares of the fourteen main countries operating in the tomato sauce and ketchup category. 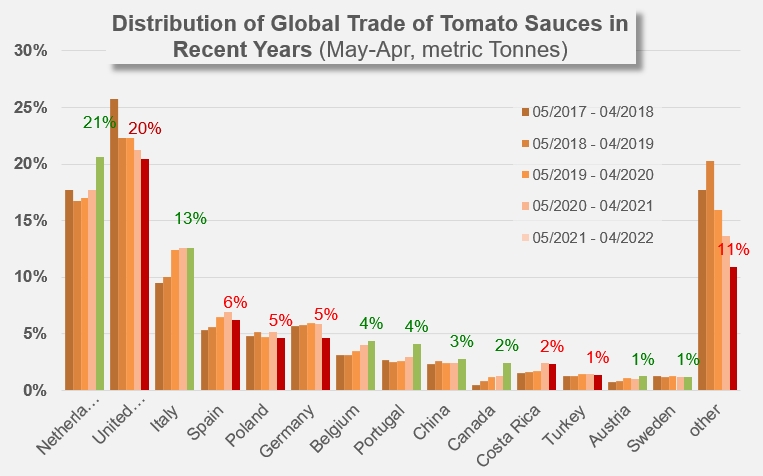 Schematic representation of Tomato Sauces (codes 210320) exports over the period May 2021 - April 2022, from the 10 main exporting countries to the 16 recipient regions. 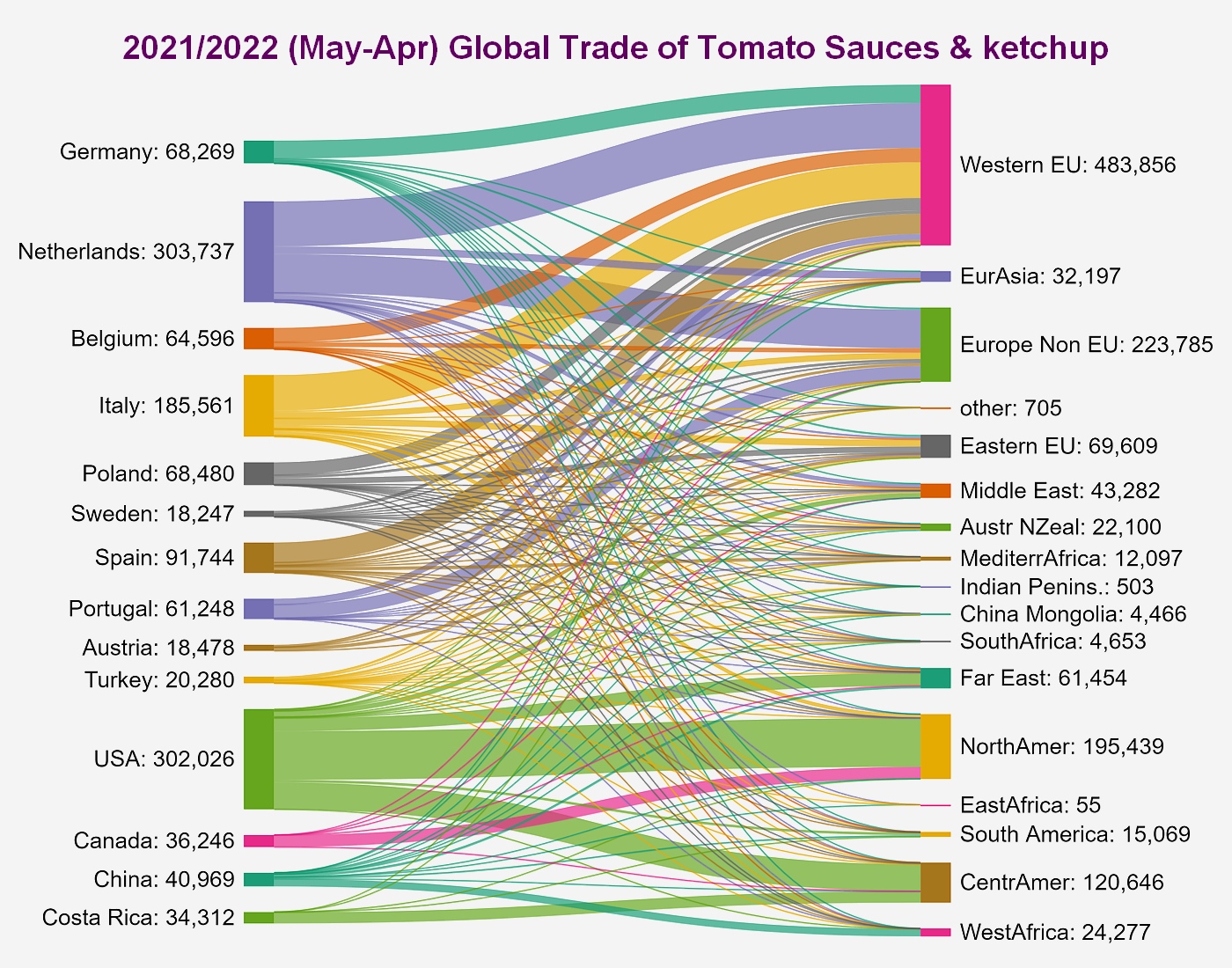 The monthly trade results (exports, imports, pastes, canned tomatoes, quantities, prices) are published on the TomatoNews website for each of the most important countries in each category. Consult them regularly and be among the first to know!