Tomato sauces and ketchup: the recovery is mainly driven by the "smaller" players
Contrary to what has been observed in other sectors (pastes and canned tomatoes), the dynamics driving global trade in the tomato sauces and ketchup sector in 2020/2021 revived a sector that had been "dormant" for five or six years. After an already significant increase in world trade in 2019/2020 (+7%), the "boost" effect of the pandemic on consumption was reflected in 2020/2021, not by a readjustment similar to those recorded for pastes or canned tomatoes, but by a second consecutive year of solid growth in trade (+3%). While the average annual growth rate (CAGR) of exports from the TOP14 countries remained below 0.1% between 2014/2015 and 2018/2019, the increase over the last two years was measured in tens of thousands of tonnes (close to 46,000 mT) and the 2020/2021 export balance was nearly 90,000 mT (+8%) higher than the average for the period running (2017/2018-2019/2020).

But once again, not all industry leaders contributed equally to this new momentum. This is evidenced by the clear contrasts between the performances of the three countries that supplied practically half of the worldwide market for several years: in 2020/2021, on a global market that nonetheless recorded heavy demand, US foreign sales (299,000 mT) fell slightly (-1%) under the influence of the continuous erosion that has been affecting exports of sauces to Canada since the trade peaks reached in 2015/2016. US foreign performances also slackened with regard to destinations such as the Emirates, Saudi Arabia, the United Kingdom and a few other countries, to the extent that these decreases in the annual results could not be compensated by the significant increases recorded in sales to Mexico, the Dominican Republic, and Guatemala.
The contrast is striking with the performance of the world's #2 operator in the sector – the Netherlands, whose exports of sauces increased by 16,000 mT (+7%) compared to the previous year, for a result of 256,000 mT in 2020/2021. The Dutch progression is more than consistent with the increase in global movements (+4%) compared to the 2019/2020 marketing year. It relied on the good results obtained on the markets of Turkey, Russia, Saudi Arabia, and above all France, Spain and Denmark, to name only the main ones.
The Italian performance over the past marketing year (180,000 mT) remained surprisingly close to the previous one (178,000 mT), with a very slight increase mainly driven by the French and Polish markets. The end result is a composite of recorded progressions (Greece, Denmark, Netherlands, Portugal, etc.) and slowdowns (Israel, Sweden, Australia, Ireland, Austria, etc.), most of which did not exceed a few hundred tonnes except in the case of Belgium (-1,000 mT) and Germany (-3,100 mT).
This observation of stability also applies to Spain, whose exports (95,000 mT) practically mirrored those of the previous year, in a group marked only by a few changes, the most important of which was recorded for sales in Italy (-1,600 mT), Portugal (-1,100 mT) and the United Kingdom (-1,000 mT) as well as the Netherlands (+900 mT) and Morocco (+2,600 mT).

The originality of the past marketing year for the sauces and ketchup category stems from the notable development of supply flows provided by the countries that are considered as "secondary" players in the sector. In this regard, special mention should be made of Poland, Belgium, Portugal, China, Egypt, Costa Rica, and Russia. Increases in foreign sales of all these countries only gave way to the Netherlands, with increases in tonnages that ranged from 2,000 mT (China) to more than 8,000 mT (Costa Rica) and growth ratios almost all above 10%.

During the marketing year 2020/2021, most regional markets recorded increases in their supplies. Three regions were exceptions to the general dynamic, among which mention should be made of North American markets (the decline of which affected US and Mexican exports), as well as those of the Australia-New Zealand region and Southern Africa. All other importing regions saw an increase in demand to varying degrees. The most important ones were recorded in countries of Central America (Guatemala, Mexico, Belize) (+18,000 mT), which benefited US and Costa Rican products. The increase in British purchases (non-EC Europe, +8,600 mT), although it did little to help Italian or Dutch foreign trade, largely contributed to improving the Belgian and Portuguese performances. The Western EU market, by far the largest in the world in terms of imports (454,000 mT), also recorded significant growth, the effects of which were mainly beneficial to Dutch foreign sales (French, Danish and Spanish markets) as well as Polish and Belgian ones. On this same market, however, Spanish products have lost ground (Italian, Portuguese and German markets), as have Portuguese products (German, Belgian and Italian markets) (see tables and histograms in the additional information at the end of this article).

The positioning in terms of market shares of the various countries involved in the global supply of sauces and ketchup reflects the progress or decline recorded in 2020/2021. Unsurprisingly, the rather disappointing performance of US exports led to a decline in the influence of the world's n°1 operator, currently only holding around 20% of the volumes traded during the past marketing year. Closer to US results, the Netherlands last year maintained their share of global activity with around 17% of the worldwide market and a return to the average position of the three previous years. A little further on, Italian products almost confirmed the substantial gain in ranking achieved over the previous marketing year, with around 12% of total global volumes. Beyond this first half of the worldwide supplies provided by the three leading countries, competition opposes in a relatively narrow range Spain (around 6% of the total but slightly down last year), Germany (5% of the total, and also slightly down) and Poland (also 5%, but up over the 2020/2021 marketing year). Next come Belgian (4%) and Portuguese (3%) products, which increased last year, followed by products from China, Egypt, Costa Rica, Russia, etc. The sauces market is sufficiently open for the remaining 80 countries (more than ten of which exported between 10,000 mT and 20,000 mT in 2020/2021) to still hold 18% of the worldwide market. 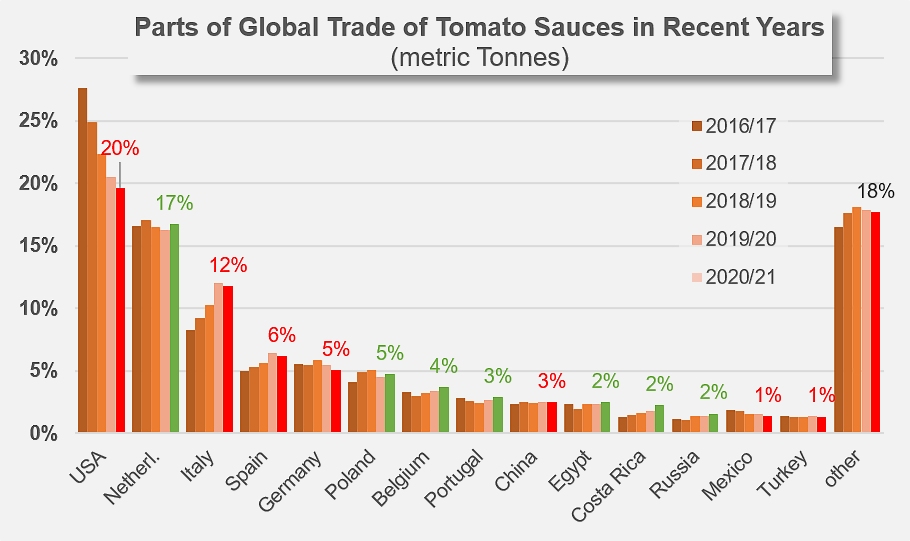 2020/2021 exports: Spain has consolidated its third place in the world
In conclusion, an approximate assessment of the quantities of raw material absorbed by exports of the main primary processing countries as well as by countries that export for remanufacturing underlines the importance of European operators in the global tomato industry. Six of them (Italy, Spain, Portugal, Greece, Poland and France) appear in the TOP20 list of countries which, in one or other of the sectors considered (pastes, canned tomatoes, sauces), are heavily involved in worldwide supply flows. The 2020/2021 marketing year did not bring any noticeable change in the global ranking of these countries, which is largely dominated by Italy and China.
It should be noted, however, that Spanish foreign trade has confirmed its rank in third place worldwide, gradually gaining this position at the expense of the US over the last four years. The decrease in US foreign trade and the concomitant rise in Spanish exports over the period running 2017/2018-2019/2020 led to a reversal of positions, with Spain confirming its rank in 2020/2021 with the estimated equivalent of 3.1 million mT of raw tomato exported in the form of industrially processed products, while the quantities mobilized by US players amounted to around 2.95 million mT. For information, the estimated volumes of raw tomato absorbed by exports from these two countries in 2017/2018 amounted to around 2.75 million mT for Spain and around 3.32 million mT for the United States.

Finally, the 2020/2021 marketing year confirmed the rise of European exports of tomato products, driven by the decisive developments in foreign operations over the last five or six years, in particular in Italy, Spain and Portugal, while the quantities mobilized over the same period by the other "TOP20" processing countries have rather suffered a gradual erosion. 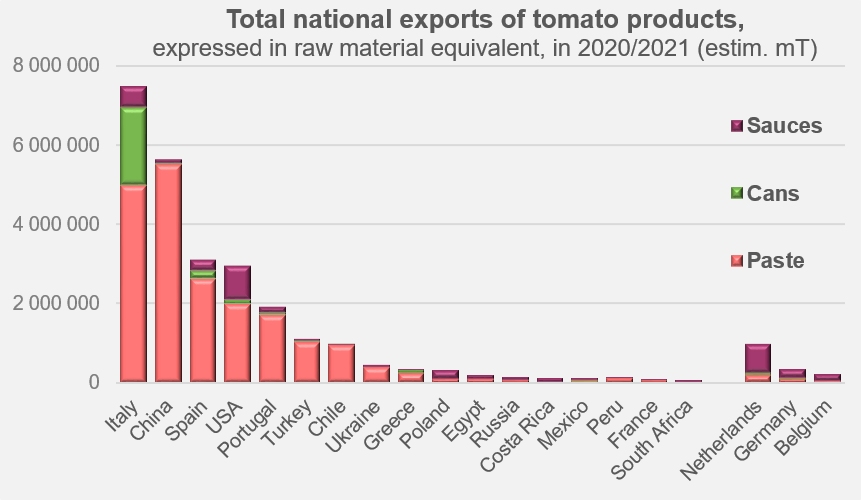 Some additional information
2020/2021 export results of the fourteen main processing countries exporting tomato sauces and ketchup over the marketing year 2020/2021, for the 16 destination regions.

Distribution of global trade in tomato sauces and ketchup in 2020/2021.

A detailed breakdown of the 2020/2021 performances for each of the countries mentioned is available on request from the TomatoNews team.

Find all the topics published under the tag "Trade, statistics, Consumption" by entering the keyword "trade" in our quick and/or advanced article search module.