07/11/2022 - François-Xavier Branthôme - Architecture of Trade
Despite a slight annual decline, the quantities traded are significantly higher than pre-Covid activity levels.

The 2021-2022 world trade in tomato products (studied over the period May 2021-April 2022 for reasons of data availability) confirmed the expectations of international market experts. Despite the slight increase in processed quantities (+2%) recorded between 2000 and 2021, available volumes have not fueled an increase in supply flows : after two years marked by an exceptional acceleration of global exchanges, in a context of extreme tension in the area of inventories (the two phenomena being closely linked and consecutive to the Covid pandemic), trade seems to have begun a gradual return to "normal levels", while remaining at a level clearly higher than those of the "pre-Covid" years. 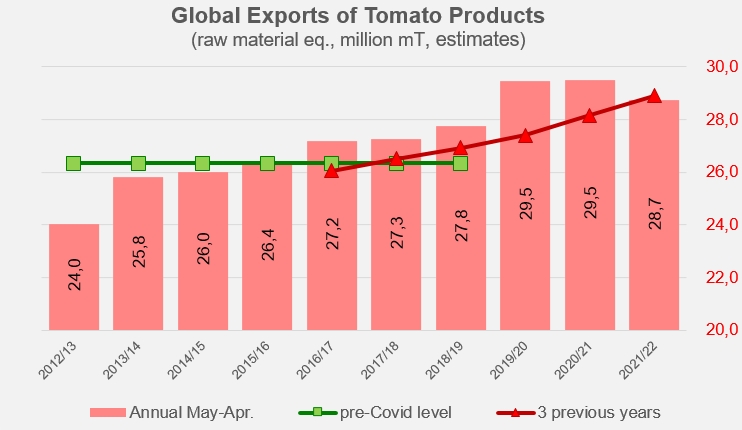 A quick estimate of total exports (expressed in fresh tomato equivalent, all product categories combined) shows that overall activity over the May 2021-April 2022 period decreased by nearly 780,000 mT (-2.6%) from the previous period and by more than 180,000 mT (-0.6%) from the average of the previous three equivalent periods. However, the same results show that, conversely, world trade increased by 1.3 million mT (+4.8%) compared to the average level of the pre-pandemic period (May 2016-April 2017 to May 2018-April 2019).

This persistent high level of trade on a global scale masks major differences both in terms of product categories and in terms of the market shares of the major countries involved in the industry.
Over the period under review, the progress of the various categories has confirmed the results observed, in particular for the 2020/2021 marketing year, and which were commented in our last consumption study (see related articles below). The quantities mobilized for global exports of pastes (customs codes 200290) during the twelve months between May 2021 and April 2022 recorded a notable decline (-1.1 million mT or -5%) compared to the corresponding period of the previous year. But it would be premature to conclude that this indicates a decline in global needs or demand insofar as this 2021/2022 result shows at the same time an increase of 0.57 million mT (+2.7%) compared to the average pre-Covid level. In addition, other significant increases have been recorded in the other categories – canned tomatoes (customs codes 200210) and sauces and ketchup (customs codes 210320) – not only in relation to average pre-Covid levels but also in relation to the same period (May-April) of the previous year. These increases, which reached 4.6% for canned tomatoes and 5.6% for sauces respectively each year (and up to 9% and 13% compared to the three-year period prior to the pandemic) seem to confirm for the second year in a row the continued strong demand for at least two of the three tomato product categories considered. 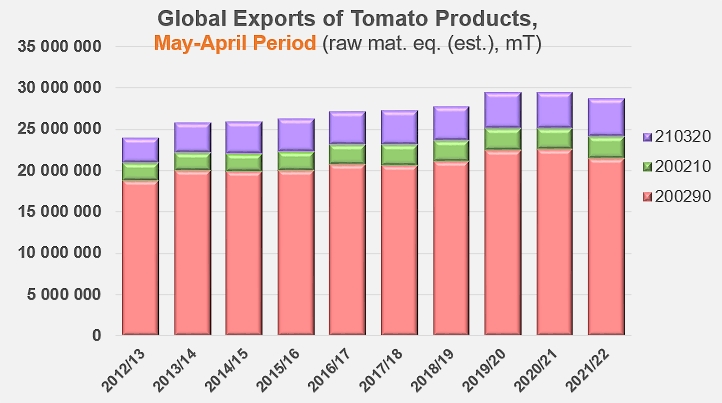 (See additional information at the end of this article)
In the difficult agro-industrial context that the tomato processing sector has also experienced in recent years, particularly in terms of quantities harvested and processed, the dynamics at play seem to indicate that the slowdown in trade is more the consequence of difficulties encountered upstream in the sector, in terms of the availability of raw materials and products, than the manifestation of a change downstream in the sector, likely to be expressed by a decrease in consumer demand.

TOP12 paste trade flows: adjustments are ongoing
After two very intense years in terms of product movements, the slowdown in export activity of the TOP12 countries has been particularly felt in the Western EU (-10%), Western Africa (-10%), Mediterranean Africa (-23%), East Africa (-49%) and Southern Africa (-11%). South America (-24%), Eurasia (-7%) and a few others complete this group of regions whose total impact has resulted in a decline of some 220,000 mT. Conversely, some increases in foreign supplies can also be noticed over the same period, notably in the Middle East (+7%), North America (+23%) and the Far East (+5%). Overall, the quantities imported from the TOP12 countries amounted in 2020/2021 (May-April) to 3.19 million mT against 3.34 million mT over the same period of the previous year, i.e. a negative annual variation of around 4.6%.

The dominance of the TOP12 in the world paste trade has been slightly eroded over the past decade, with the proportion of the leading countries representing just over 93% of total trade in 2021/2022, compared to over 96% in 2012/2013.
In this context of trade contraction, the results of the main countries involved in the sector have been very mixed. Two significantly active countries have weathered the crisis particularly well and made remarkable inroads into the world market : with nearly 273,000 tonnes of pastes (finished products) exported between May 2021 and April 2022, Turkish operators improved their result by more than 83%, compared to just under 149,000 mT in the corresponding period of the previous year, thereby reaching a historically high level of activity. Most of this progress was built on sales to Iraq (at the expense of Iranian products in particular), but also on exports to Italy, Oman and Syria. This latest Turkish result is also 78% higher than during the pre-Covid period (about 153,000 mT on average annually between 2016/2017 and 2018/2019 (May-April)).
As for Greek paste exports, they recorded an increase of about 33%, to nearly 50,000 mT over the period under review. This result, mainly recorded thanks to the British and Polish markets, brings Greek operations back to the levels recorded between 2012 and 2015 and to a level about a third higher than that of the three years prior to the Covid pandemic (38,000 mT).
Chilean paste sales also benefited over the period, improving their performance by almost 9,000 mT (+5.8%) compared to the same period of the previous year. A significant increase in exports to the EU (Germany, Sweden, Italy, Poland, etc.) compensated for a drop in trade flows to Argentina. The Chilean result shows an increase of 29% compared to the pre-Covid period (approximately 122,000 mT) (see our additional information at the end of this article).

The other major tomato paste exporting countries have all recorded declines in activity to varying degrees.
The most important one in terms of quantity is Iran, whose official export data shows a drop of more than 50% in annual variation, from 230,000 mT in May 2020-April 2021 to around 110,000 mT in May 2021-April 2022. The main components of this decline are the spectacular drops in sales to Iraq, the Emirates, Afghanistan, Russia and Romania. The Iranian result is 13% below its average pre-Covid level (127,000 mT).
With exports falling from nearly 900,000 mT to less than 800,000 mT, the Chinese sector recorded a counter-performance that brought its annual operations down to a level it had not seen since 2005/2006. The markets most affected by the slowdown have been European (Italy, Portugal, Poland), African (Nigeria, Togo, Congo (Dem. Rep.), Guinea, Angola, Sudan) and Middle Eastern (Yemen, Saudi Arabia, Israel), to name only the most notable. Despite a sharp increase in exports to Russia, the year's decrease amounted to some 86,000 mT, which is approximately 10% of China's result over the previous period. Quantities exported during the reference period were 11% lower than during the pre-Covid period (890,000 mT).

Italian results have not been particularly satisfactory either, with a negative annual variation of nearly 7% between 2020/2021 and 2021/2022 (May-April), essentially linked to the decline in exports to the western EU (Germany, France, the Netherlands, Austria) and Mediterranean Africa (Libya), which were not offset by the increases recorded, in particular to Poland. So total exports have fallen from nearly 790,000 mT to less than 740,000 mT, a level of operations that remains slightly higher than before Covid (approximately 723,000 mT).
The end of the pandemic period was less abrupt for Spanish exports, with official figures showing an annual decline of just over 2.5%, mainly recorded on the markets of the western EU (Italy, Germany, Portugal, Sweden, etc.), East Africa (Sudan), the Middle East (Saudi Arabia, Kuwait) and Libya. Conversely, there were notable increases in the quantities of pastes delivered to the United Kingdom and Croatia. Ultimately, the 410,000 mT exported by Spain between May 2021 and April 2022 places the latest result at 13% above pre-Covid activity levels (approximately 364,000 mT).
The decline recorded by Portuguese exports is almost equivalent in quantity to the one observed in Spain, but slightly more marked in proportion (-3.5%). The main markets affected were British, Omani, Kuwaiti and Russian. Increases were recorded in sales of products to Japan, South Africa and the Netherlands, so that with just over 268,000 mT exported, the Portuguese industry has nevertheless recorded a result 3% higher than that of the pre-Covid period (260,000 mT).
The quantities of pastes exported by the United States show only a minimal annual variation, going from just under 315,000 mT in 2020/2021 to close on 314,000 mT in 2021/2022. However, this apparent stability masks a drastic drop in sales to Italy, which has been offset by a few increases in foreign sales, notably to Canada, South Korea and Taiwan, as well as to South America (Mexico, Costa Rica, Guatemala and Colombia). As in the case of China and Iran, the US result also remains well below its pre-Covid level (around 368,000 mT). 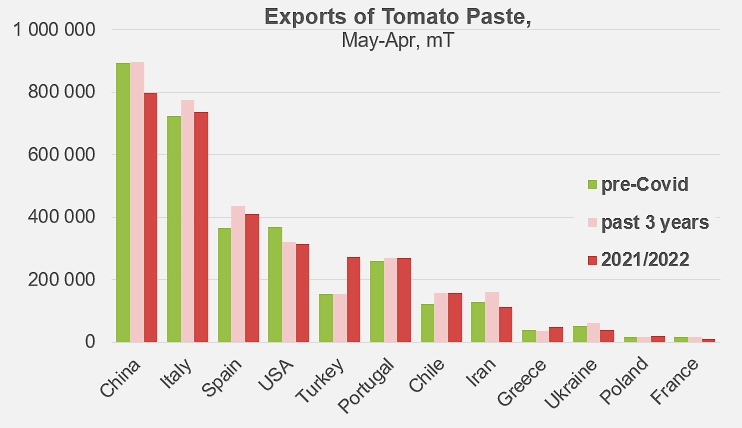 Comparison of results for the baseline period (May 2021-April 2022) with the corresponding periods of the previous three years (2018/2019 through 2020/2021) and the three pre-Covid years (2016/2017 through 2018/2019).
Several EU countries (Italy, Spain, Portugal, Greece, and Poland) as well as Turkey and Chile show improved performances compared to the pre-Covid period, while Chinese, US, Iranian, and French results remain below this threshold.
Due to the situation in Ukraine since the end of February 2022 and the probable criminal appropriation of some Ukrainian products by Russian forces, the data presented can only be partially representative of the export dynamics of the Ukrainian industry during the reference period. For the period ending in February 2022, annual foreign sales (March 2021-February 2022) were 20% lower than during the corresponding period of the previous year and 9% lower than the average activity during the three years preceding the Covid pandemic (see our related articles below and the monthly trade reports published on our website www.tomatonews.com).

Some complementary data
World exports of tomato products over the period May 2021 - April 2022. 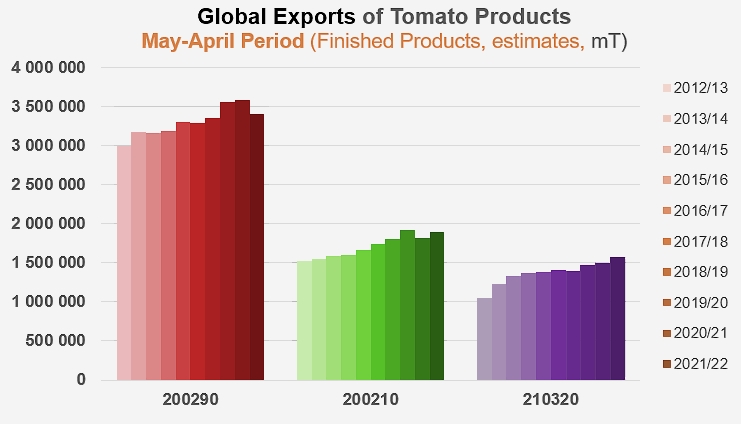 Pastes (200290...)
Quantities of tomato paste exported between May 2021 and April 2022 by the twelve main exporting countries operating in the category, to the sixteen importing regions (defined in 2011, revised in 2018). 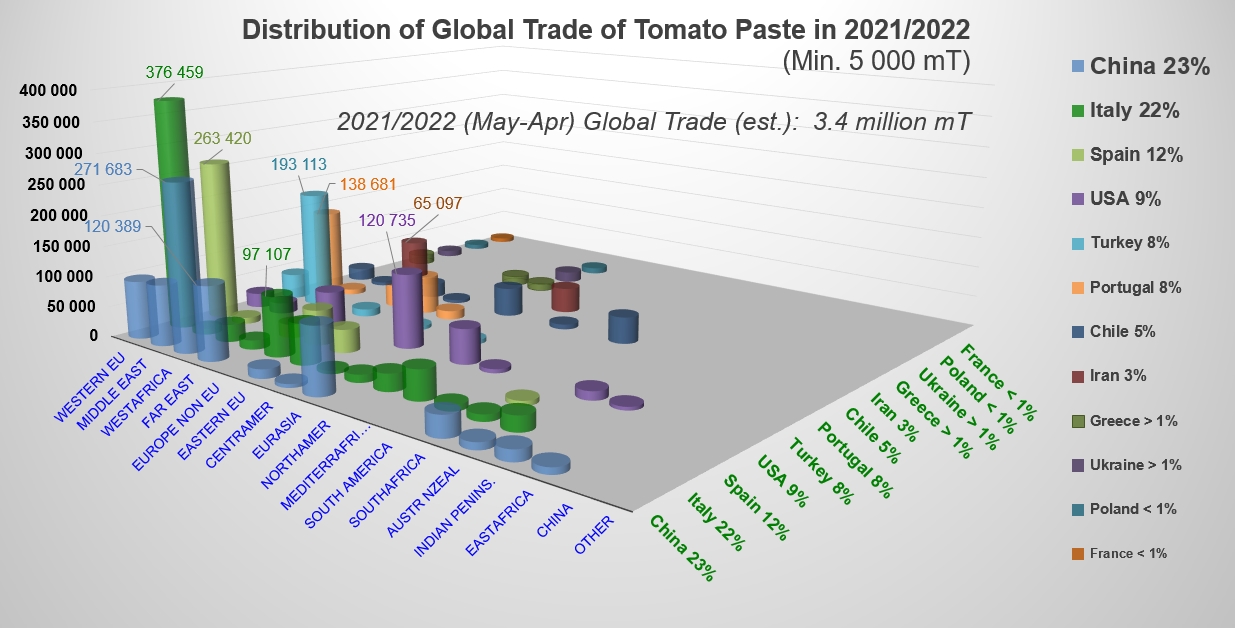 Recent evolution of the market shares of the twelve main countries involved in the tomato paste category.

Schematic representation of Tomato Paste (codes 200290..) exports over the period May 2021 - April 2022, from the 12 main exporting countries to the 16 recipient regions. 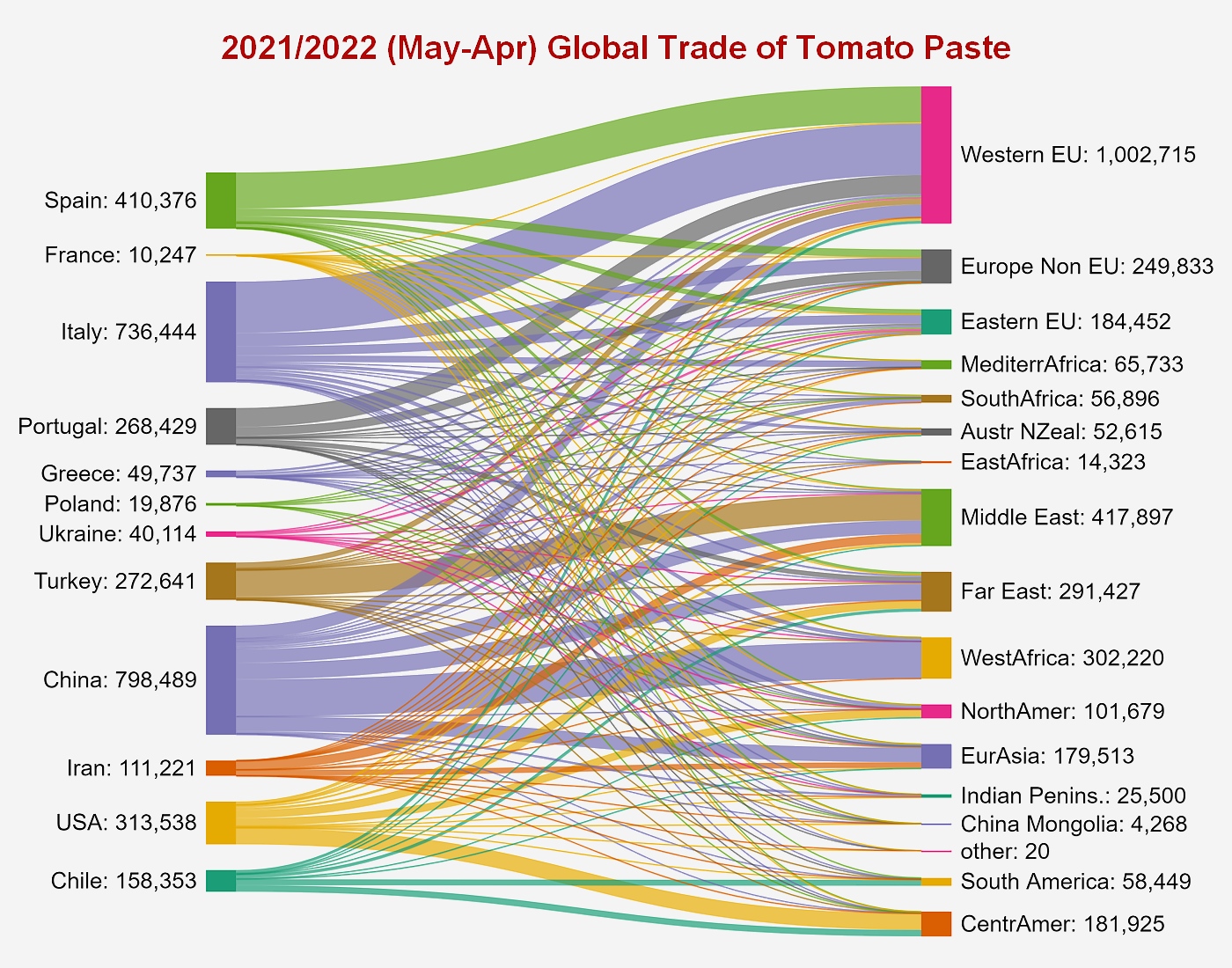 The monthly trade results (exports, imports, pastes, canned tomatoes, quantities, prices) are published on the TomatoNews website for each of the most important countries in each category.
Consult them regularly and be among the first to know!