Ukraine: the EU absorbs three-quarters of the country's paste exports

The emergence of Ukrainian products on the worldwide tomato paste market dates back just over ten years, when the country's exports suddenly rose to about 6,000 mT in 2009/2010, after being virtually non-existent until 2008/2009. They then rapidly grew over the following years, recording several tens of thousands of tonnes annually, to the point of exceeding the threshold of 60,000 mT last year. This sharp increase in exports has been driven by a rapid development of processing capacity and strong growth in the production of processing tomato crops. The volumes processed have practically doubled in ten years, increasing from approximately 400,000 mT in 2011 and 2012 to 850,000 mT in 2021 (WPTC forecast as of 20 August 2021). 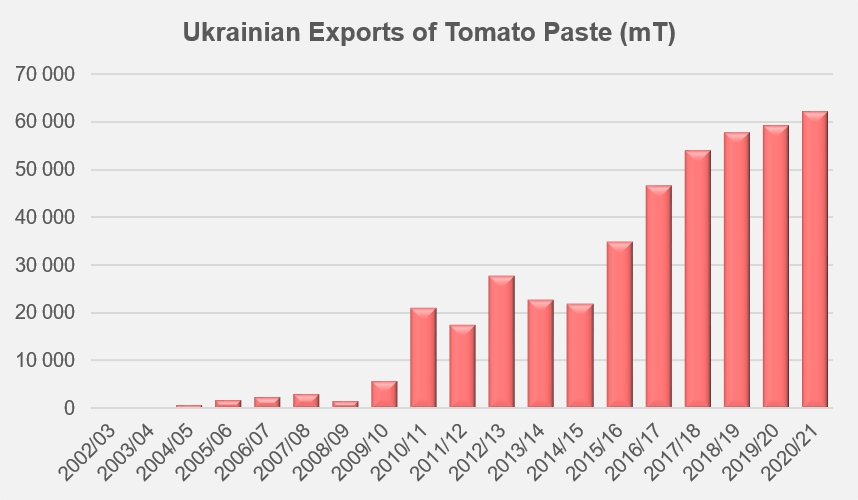 Over this latest marketing year, like the three previous years, the main buyers of Ukrainian products have been Poland (41% of annual volumes on average), Germany (13%), Austria, Czech Republic and Japan (between 5% and 6% each).
So the geographic profile of Ukrainian foreign trade is strongly focused on countries of the EU. In addition to the countries already mentioned, other European countries also buy Ukrainian products, including Latvia, Romania, Greece and the Netherlands. In total, the EU imported close on 48,000 mT of paste from Ukraine in 2020/2021, which in a 16% increase in volume compared to the 41,000 mT purchased in 2019/2020 and a 21% increase compared to the average annual supply volumes (39,500 mT) for the period running 2017/2018 to 2019/2020. So the UE absorbed close on 77% of Ukraine's foreign trade in 2020/2021, against slightly more than 69% over the three previous marketing years. 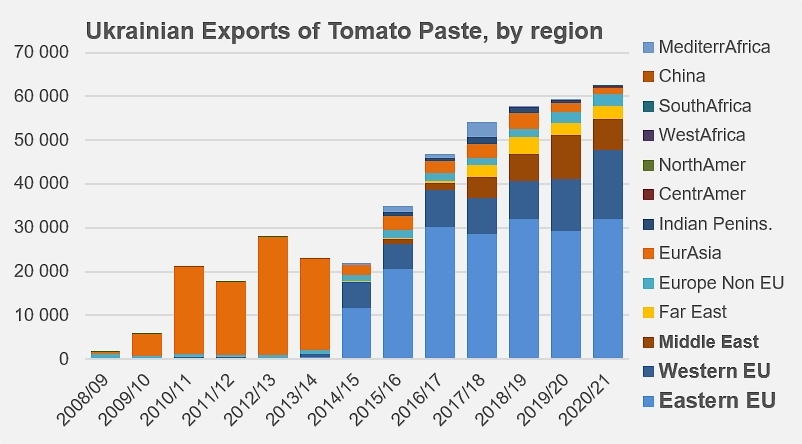 The quantities shipped to the Emirates, Israel and Jordan make the Middle East the second biggest buyer-region for Ukrainian tomato paste, with a volume of almost 7,000 mT over the past marketing year, a figure that more or less matches the average of the three previous years.
The volumes sold to countries of the Far-East, non-EC Europe and Eurasia account for a minimal proportion of Ukrainian foreign trade, close on 13% of the total. Other regions, notably the Americas and Africa, record virtually no imports of Ukrainian tomato products.

The country's industry exports almost no canned tomatoes (less than 1,100 mT over the past marketing year and less than 900 mT on average annually over the three previous years).
However, it has shown itself to be relatively active in the sector of sauces and ketchup, of which it exported close on 19,000 mT in 2020/2021, with a notable increase (6%) compared to the 17,800 mT exported on average over the three previous years. Most of the exported products are shipped to a few countries geographically close to Ukraine (Belorussia, Russia, Georgia, Lithuania, and Moldavia, to only mention the main ones). 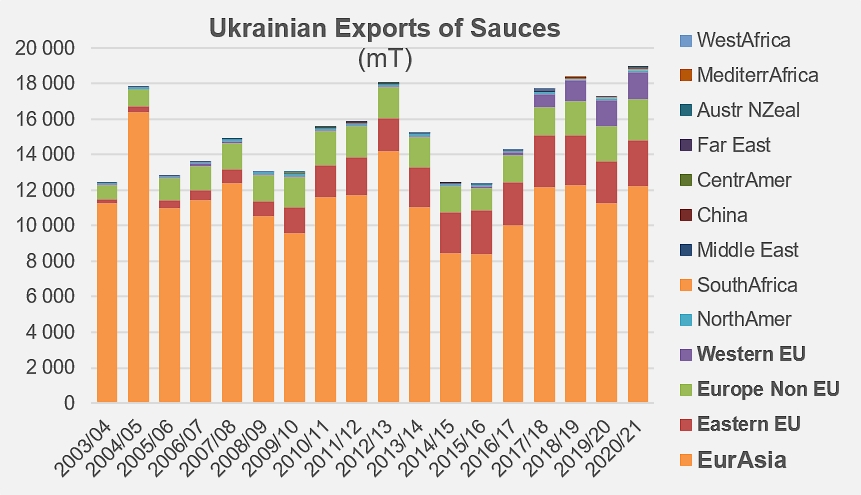 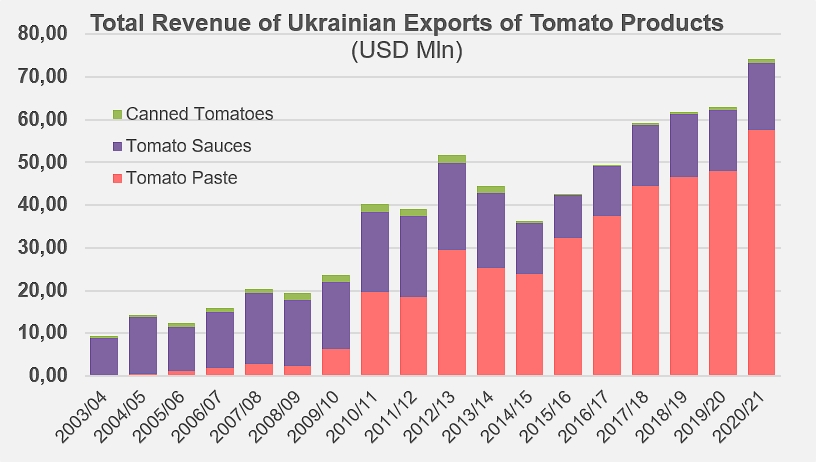 Some additional information:
The almost linear progression of processed quantities has taken the Ukrainian industry from a few thousand tonnes at the beginning of the 2000s to some 850,000 tonnes expected for the ongoing 2021 season (estimation as of 20 August). Local processors have declared their intention to rapidly develop operations further in the coming years. 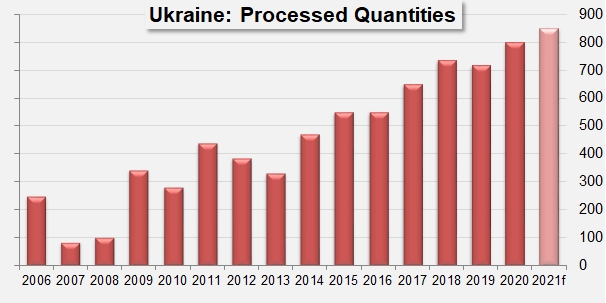 Progression and distribution of Ukrainian exports of paste, by category (HS codes).