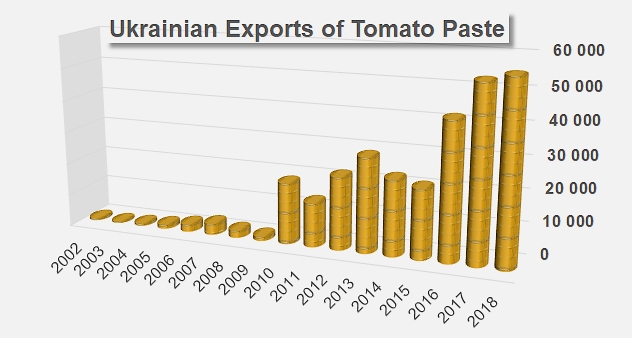 Ukrainian exports suddenly took off after 2010 and then found a second wind when the EU opened up a 13 000 tonne quota in 2014. The products exported are mostly paste intended for industrial use, with Brix values of 12-30 and above 30 (customs codes 20029031 and 20029091).
Almost three quarters of the volumes exported by the Ukrainian industry are intended for the European Community market, with the remainder being delivered to countries of the Middle East, Eurasia, the Far East and, to a lesser extent, to European countries outside of the EU (Switzerland) and countries of the Indian subcontinent (Pakistan).
After the implementation of the Russian embargo on Ukrainian products and the granting by the EU of a 13 000 tonne quota in 2014, the main European outlets for Ukrainian tomato pastes were Germany and Austria, before the sudden and spectacular development of the Polish market since 2016. Over the past three years, less than 8 000 mT of Ukrainian pastes have been exported on average each year towards the western countries of the European Union (EU15), whereas the eastern part of the EU has absorbed annually close on 29 500 mT of Ukrainian tomato paste over the same period of time.
The development of secondary markets has been equally spectacular, despite involving far smaller quantities, usually a few thousand tonnes. Between 2015 and 2018, Ukrainian exports of pastes leapt from 600 mT to 4 400 mT to the Middle East (Israel, Emirates, etc.), from 300 mT to 3 100 mT to the Far-East (Indonesia, Japan, etc.), and recorded notable growth on the markets of Belarus, Switzerland, Egypt, etc.

The Ukrainian industry also developed a solid pattern of foreign sales in the tomato sauces & ketchup category: the volumes involved grew from approximately 9 300 mT in 2002 to close on 18 500 mT in 2018. For the time being, the commercial context mainly involves the countries that are located geographically close to Ukraine, the main ones being Belarus, Georgia, Russia, Lithuania, etc. The Ukrainian tomato industry recorded a turnover of USD 14.5 million (EUR 12.3 million) in 2018. 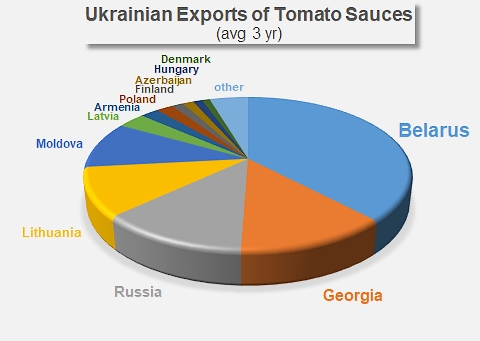 Some complementary data
Evolution of the volumes of tomatoes processed by Ukraine since 2006.