Among the emerging countries that have been noted in recent years or months for their impact on the worldwide markets for tomato products, particularly for paste, Ukraine has climbed into the top ranks, mainly due to the explosive development of its export shipments.
Fifteen years ago, the country was virtually absent from the worldwide market, but exports of Ukrainian products started increasing during the 2010/2011 marketing year, based on demand from Russia, before being forced by the Russian embargo to extend their reach to a wider geographical zone after 2014/2015. Despite this slight slowdown, Ukraine's foreign sales have been growing at the exceptional annual rate of 14% over the past seven marketing years (close on 35% per year over the past fifteen years). 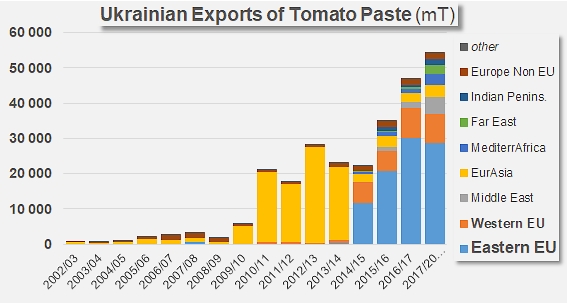 The reorientation of Ukraine's foreign activities has been focused on Western Europe, particularly the European Union (which also contributed financially to the development of the local processing industry). But it has also been focused on an increasing number of countries of Eastern Europe, the Middle East, EurAsia, North Africa, etc., and in 2017/2018, more than thirty countries bought Ukrainian tomato products, which is four times more than in 2010/2011. Today, the main clients of the Ukrainian industry are in Poland (23 700 mT over the past marketing year, or 44% of Ukraine's paste exports), Germany (4 800 mT), Egypt (3 300 mT), Austria, the Czech Republic, Belorussia (2 700 mT), the UAE, Indonesia, Israel, etc.

Paste sales account for the largest part of the Ukrainian industry's foreign revenue, but not for all of it. The turnover generated on foreign markets has been progressing regularly at an annual rate of almost 12%, reaching close on USD 59 million in 2017/2018, of which over USD 44 million come from the paste sector, while about 14 million come from foreign sales of paste. The commercial activity of this sector remains focused on countries that are located in close geographic proximity. Of a total of 17 700 mT last year, the main outlets were Belorussia (7 100 mT), Georgia (2 200 mT), Russia (2 100 mT), Lithuania (1 700 mT) and Moldavia (1 500 mT). 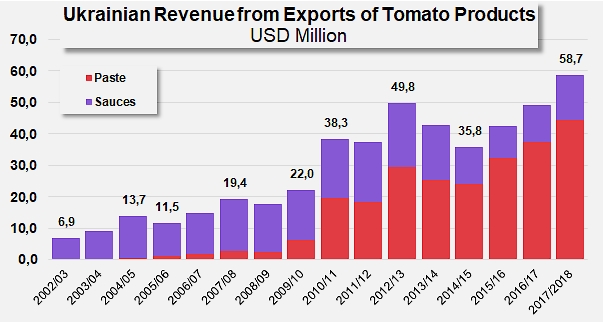 The Ukrainian industry owes the exceptional development of its exports in recent years to an aggressive commercial policy, similar to the one that was once implemented by a number of operators in China, Portugal or Spain. Ukraine's positioning, which was quite variable between 2002/2003 and 2009/2010, has radically shifted over the past eight or nine marketing years and is now firmly settled in the lowest ranges of the worldwide price bracket for tomato products. This approach, along with the fast growth of processed volumes and the proximity of outlet markets, probably explains this rapid success and the positioning in 10th place worldwide of Ukrainian exports in 2017/2018.
Given the considerable impetus provided by Iran's major counter-performance recorded this year on neighboring markets and by the difficulties encountered by the Turkish and Chinese industries, it is not unthinkable that Ukrainian exports will continue to grow in 2018/2019, climbing even higher next year in the worldwide ranking of paste exporting countries. 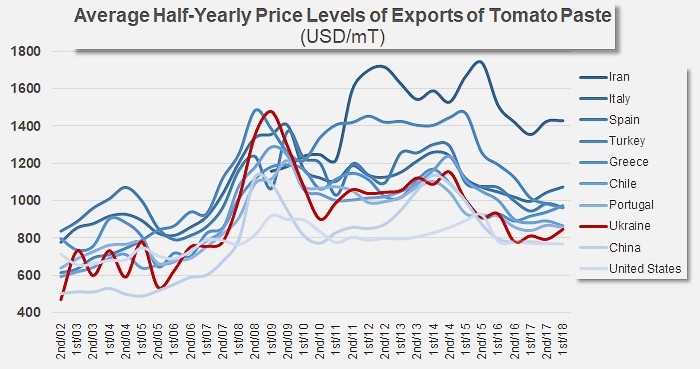 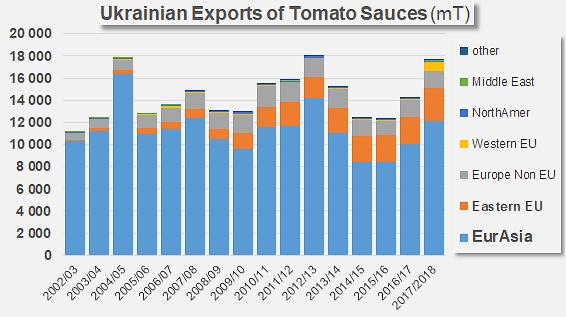