26/03/2021 - François-Xavier Branthôme - Lire en français
In the category of concentrated purées, annual growth has continued unabated at approximately 8% over the past ten years 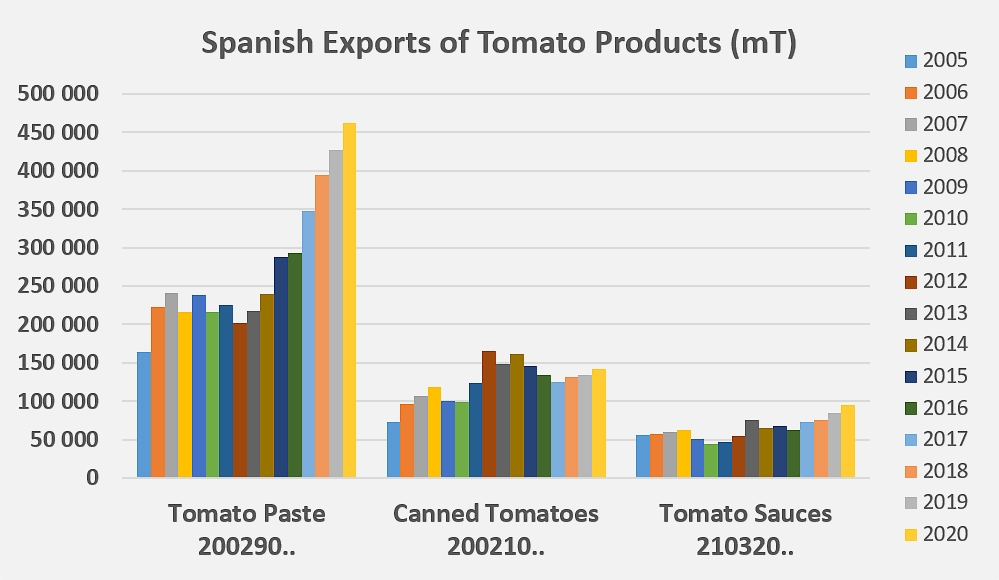 In the concentrated purées category, which is a health indicator and universal benchmark for comparing the performances of the tomato industry, most of the countries mentioned have reported more impressive growth ratios than Spain. However, this should not hide the fact that despite an already very high level of activity, Spain (the third-largest operator in the sector) has been able to maintain and improve its level of performance to the point of recording the highest volume increase after Italy in 2020, and in this respect is well ahead of its competitors in the Mediterranean region.

However, it is difficult to clearly identify the drivers of this growth, which may have prolonged the development dynamic recorded since 2012/2013 and/or be the result of the circumstantial increases caused by the acceleration in demand at the start of the CoVid pandemic in the spring of 2020. In either case, it is clear that the growth rate of Spanish exports in the concentrated purées category (in the broadest sense of the term, recorded under customs codes 200290...) cannot be denied. The same can also be said of other product categories in 2020. In the final count, foreign sales of Spanish concentrated purées have exactly doubled in less than ten years, increasing from a level that fluctuated between 200,000 and 240,000 mT over the period running 2005-2012 to nearly 430,000 mT in 2019 and more than 460,000 mT last year.

In recent times, nearly 85% of Spanish exports of concentrated purées (all categories, qualities and formats included) went to European Community markets. It is these outlets that recorded most of the growth over the past eight years, bringing the quantities involved from just over 190,000 mT before 2012 to over 365,000 mT last year. 2020 results indicated particularly marked accelerations – both in terms of quantities and percentage shares – on the German, Dutch, Portuguese and Polish markets, while the volumes delivered in Italy, the United Kingdom and a number of Scandinavian markets slowed markedly.
In recent years, other regions have also become the commercial targets of Spanish operators, where smaller but nonetheless significant tonnages have been multiplied by 6 (Far East), by 7 (Middle East) and by more than 8 (Mediterranean Africa).

Concentrated purée exports have accounted for nearly three quarters of the value generated by foreign sales of tomato products over the past three years. The sector's turnover amounted to EUR 383 million in 2020, up 20% compared to the average of the three previous years (2017-2019, EUR 318 million). 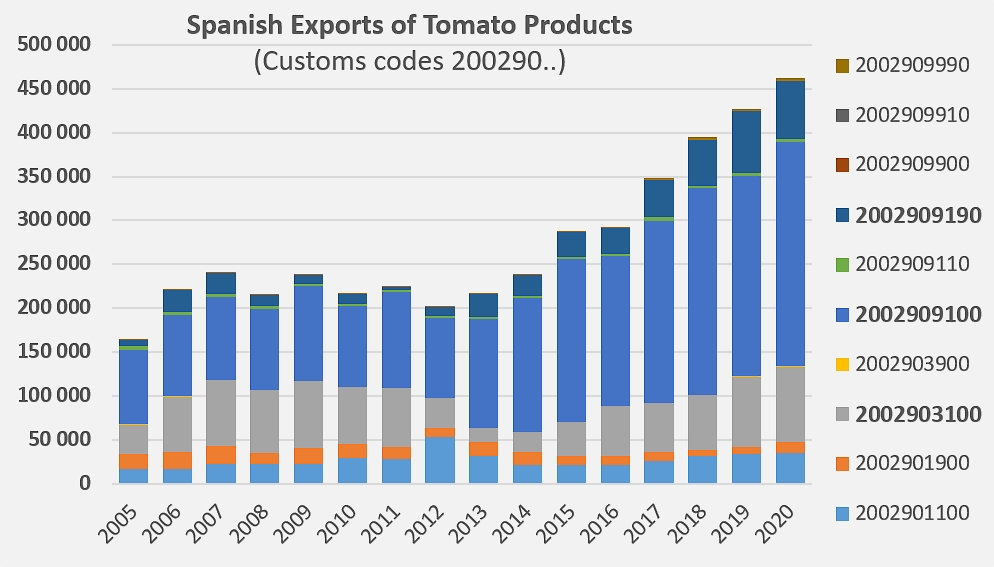 2020 results for the canned tomatoes category (customs codes 200210) were in the exact continuation of the levels recorded over the last ten years. This confirms the sustainable consolidation of the Spanish industry in a commercial niche mainly occupied by Italian products, but also underlines the difficulty of acquiring market shares in the face of competition from the world leader for this category.
In a market that does not yet seem to be saturated, the 141,000 mT of canned tomatoes exported last year by Spain represent an increase of just under 12,000 mT compared to the period running 2017-2019, and of just under 8,000 mT compared to 2019 results, i.e. increases of around 9% and 6%. By way of comparison, Italian foreign sales in the same category increased last year by almost 50,000 mT compared to 2019 and by more than 100,000 mT compared to 2017-2019.
Most of the growth recorded in 2020 resulted from significant increases in supplies to the historical buyers of Spanish canned tomatoes. The eleven main countries to purchase Spain’s products in this category all belong to the EU, and they absorbed 92% of its canned tomato exports. Among these top importing countries figure France, the United Kingdom (pre-Brexit), the Netherlands, Germany, Belgium and Poland. Only Portuguese purchases recorded a significant drop last year, with a decrease of more than 2,000 mT (-12%) compared to 2017-2019.

With exports valued at a total of EUR 66 million in 2020, up approximately EUR 9 million (+15%) compared to the three previous years, the canned tomatoes category has shown itself to be the “less” dynamic of the three export categories of the Spanish industry in 2020. It accounts for around 13% of the total value generated by Spanish foreign sales of tomato products. 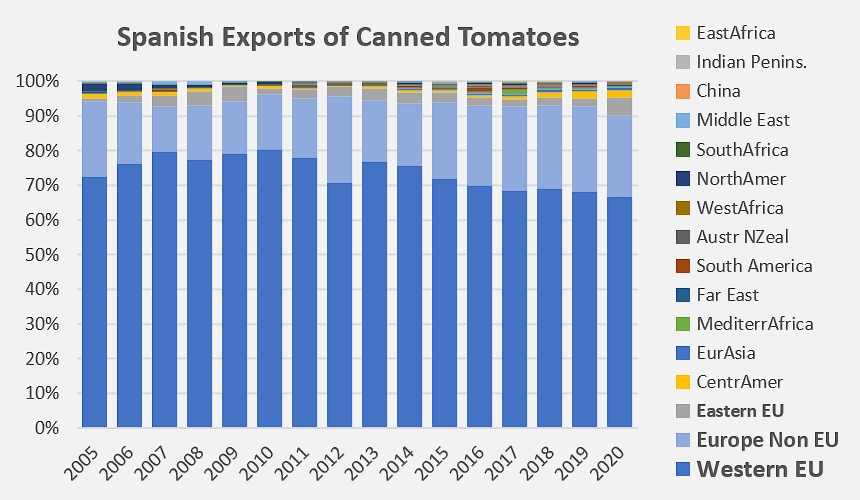 The past decade has seen a consolidation of Spanish foreign operations in the sauces sector (customs codes 210320) which had recorded a spectacular decline between 2008 and 2010. Since that time, exports of Spanish sauces have experienced a sometimes irregular but remarkable development, with an average annual growth (CAGR) close to 8%, bringing the quantities involved from 45,000 mT in 2010 to nearly 95,000 mT in 2020.
Most of the quantities exported are shipped to EC destinations, which have continued to absorb 80% of the volumes over the past three years. However, exports to third-party regions have been increasing rapidly, proof of a well-thought-out approach to the geographical diversification of the industry, with the share of destinations outside the EU climbing from 5,500 mT in 2013 (7% of the annual total) to nearly 23,000 mT last year (24%).
So the main contributors to the increase recorded by Spanish sauces in 2020 compared to 2017-2019 were actually markets of the western EU (Netherlands, Italy, Belgium), though notable increases were also recorded for the Moroccan, Australian and Cuban markets.
The sauces sector accounts for around 16% of the total value generated by Spanish foreign sales of tomato products. Last year, the value of foreign sales of sauces amounted to EUR 89 million, up approximately EUR 20 million (+28%) compared to the three previous years, making it the most dynamic sector of the three export sectors of the Spanish industry in 2020. 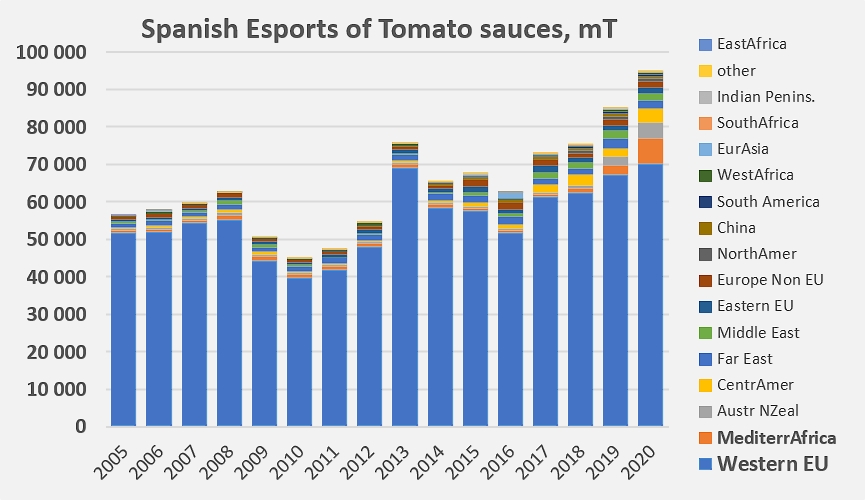 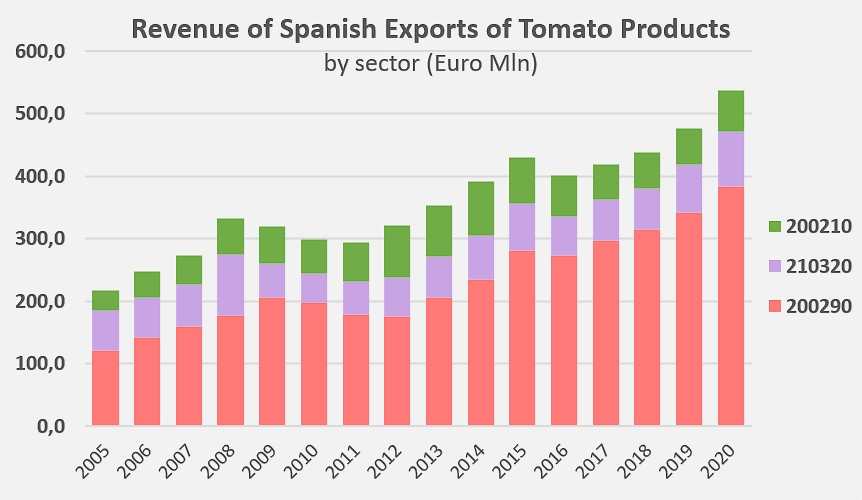 Regional components of the value of Spanish tomato product exports. 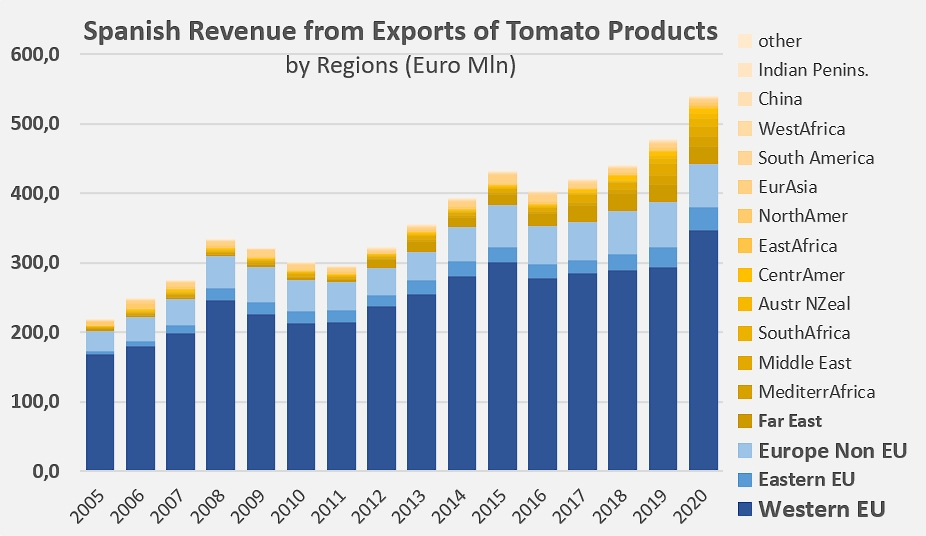 Spain: a hiatus in the increase of export shipments