Ketchup and tomato sauces: operators reshuffle their positions
In the sauces sector, the participation of operators in countries that are not first-stage processors makes this category a "field" that is more open to competition and much more balanced in terms of the forces involved. Against a backdrop of increased demand, linked at least in part to the CoVid pandemic, the growing exposure to competition of leading operators and the relative strength of the US currency are among the reasons that may explain the rapid decline of US foreign operations as well as the gradual decline in Dutch export sales, whose dominant positions are being strongly challenged by the expansion of emerging Italian and Spanish operators, as they seek increased value.
With just under 300,000 mT of finished products exported in 2019/2020, the USA, which is the world's leading player in the category, posted a performance of around 9,000 mT (-3%) against its previous result, confirming the declines recorded in recent marketing years. The importance and strategic nature of the regions or countries affected by the decline are more worrying than the downturn itself, given that they are preferred markets, - or even practically captive markets - of the US industry, and ones that have also recorded significant increases in demand. Without going into detail, the US foreign performance recorded a sharp downturn in orders from buyers in North America (Canada -5,000 mT), Central America (Mexico -1,700 mT), Europe (United Kingdom -1,100 mT), South Korea, Lebanon, Israel, etc., for which the  increases were too rare and too limited to compensate (Dominican Republic +1,800 mT, Saudi Arabia +1,000 mT, Nigeria +600 mT, to only mention the main ones).

Although in significant progression, the performance for the 2019/2020 marketing year of the Netherlands tomato sauce production remains below the level generally expected of an industry that ranks second worldwide for this category, in a global context that has seen an acceleration of demand. The worldwide market shares held by products from remanufacturing operators in the Netherlands have been eroding for several years and, just on the market of the Western EU, the preferred outlet for this category, the growth of Dutch exports of sauces and ketchup does not compare particularly favourably with the growth of more assertive competitors. Between July 2019 and June 2020, while the demand for sauces and ketchup in the EU increased by more than 33,000 mT, exports from the Netherlands increased by only around 4,100 mT, while shipments of Italian and Spanish products to the same region increased by 23,000 mT and 8,300 mT respectively, to which were also added the increases achieved by operators in Belgium (+3,600 mT), Portugal (+3,900 mT), Egypt, etc. 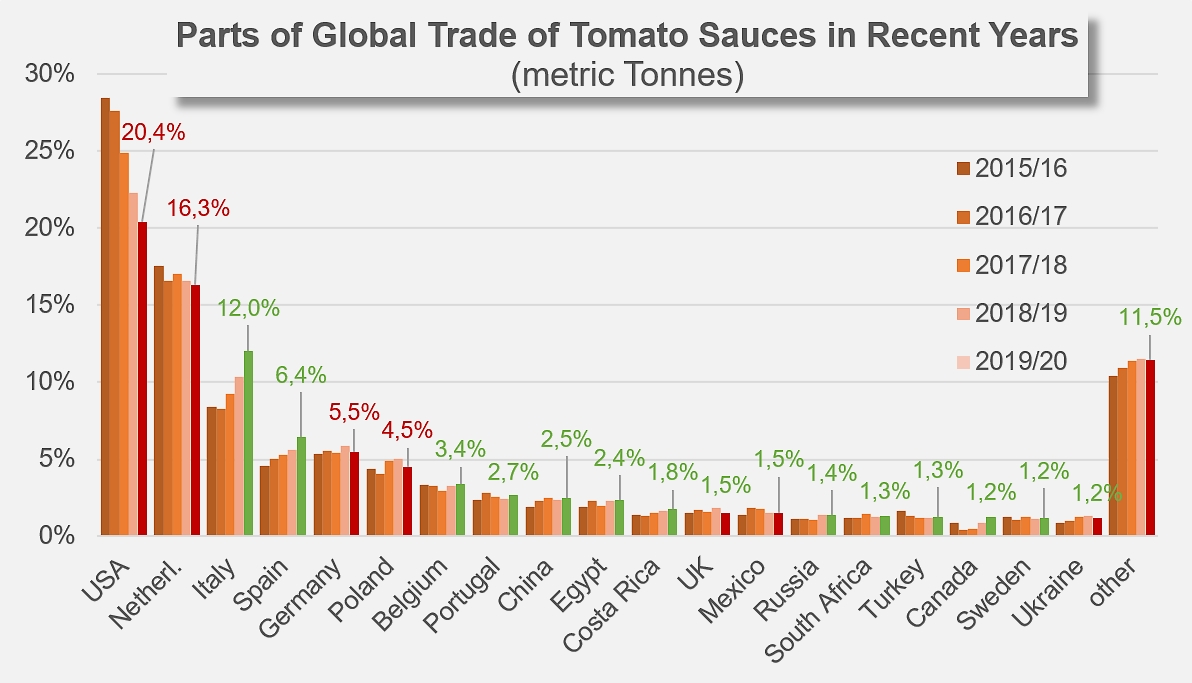 However, and recording only a few occasional decreases (1,300 mT in total, mainly to Polish and Hungarian outlets), the Netherlands also improved their performance on the markets of Saudi Arabia, Ukraine, Russia and Congo (Dem. Rep.), with total foreign activity amounting to more than 240,000 mT, which is an increase of almost 5% compared to the previous year, and almost 7,400 mT (+3%) compared to the average of the three previous years.

The developments already reported regarding the supplies of sauces and ketchup to the Western EU, North America, the Far East, non-EU Europe, Australia-New Zealand and Mediterranean Africa have served as drivers for the growth of Italian and Spanish foreign operations. A closer look at the European context, which has already been commented, underlines the importance of noting the increases recorded by Italian sales to Germany (+11,600 mT), France (+10,000 mT), Belgium, Spain, Ireland, etc. As for Spanish products, they have made good progress on the markets of Italy (+3,000 mT), the Netherlands (+2,000 mT), France (+1,100 mT), Portugal, Germany, etc.
The Italian performance has also been consolidated thanks to buyers in Canada, Japan, Switzerland and as far away as Australia, where sales of sauces have continued to progress for the past four or five years. Australia also imported a larger quantity of sauces from Spain, which made one of its best progressions of the past year, with a gain of almost 2,600 mT. The same is true in Morocco, where imports of Spanish products have increased by nearly 3,400 mT.
Overall, the total quantities of sauces and ketchup exported by Italy mobilized more than 177,000 mT of finished products, a remarkable performance that indicates an increase of 34,000 mT (+24%) compared to the previous year and of nearly 48,000 mT (+37%!) compared to the average level of operations for the three previous years. The strengthening of the Spanish position in the sauces category is quite comparable to that of Italy, as total foreign sales (nearly 95,000 mT) of tomato frito and other Spanish products in 2019/2020 jumped by more than 16,000 mT compared to 2018/2019 and were nearly 21,000 mT higher than the average annual exports of the three previous years.

However, the activities of the four main industries in the sector only satisfy a little more than half of global demand. As impressive as they are, the quantities delivered by these leading countries leave a large place for other players such as Germany, Belgium, the United Kingdom, to name just a few that appear among the world's TOP15 sauce manufacturing countries by only using products that have already been industrially processed, as is also the case of countries like Poland, Portugal, China, Egypt, etc.
German operations (81,000 mT) were extremely stable last year, almost identically renewing regional and total results for the 2018/2019 marketing year (-575 mT).
With exports of around 66,000 mT, Poland posted a disappointing performance, falling by more than 3,700 mT against the previous year, but above all caused by a series of decreases on the markets of Britain (-3,400 mT), France (-1,100 mT), Spain, Italy, the Netherlands, etc., whereas European demand has clearly increased.

It is precisely this improvement that benefited Belgian (50,000 mT) and Portuguese (39,000 mT) exports, whose increases over the 2018/2019 marketing year have been comparable in terms of quantities (5,200 mT for both countries) and relatively close in terms of growth (nearly 12% for Belgian products, more than 15% for Portuguese sauces). For both of these countries, the most significant increases were achieved on the markets of the United Kingdom, Belgium, Germany and the Netherlands.

According to official Chinese statistics, the quantities of sauces exported during the last marketing year by China were comparable to those of Portugal, amounting to approximately 36,000 mT. This result corresponds to a significant increase (+10%) in operations compared to the 2018/2019 marketing year, mainly achieved thanks to Chilean purchases (+5,200 mT), and despite a notable drop (-3,000 mT) in product sales in West Africa (Ghana, Benin, Nigeria and Togo).

Finally, it is worth mentioning the presence in the TOP15 list of sauce operators of countries such as Egypt, whose foreign deliveries last year amounted to nearly 35,000 mT of finished products, mostly shipped to geographically close trading partners, mostly in the Middle East (Saudi Arabia, Emirates, Jordan), South Africa (Kenya) and the Mediterranean (Morocco). Egypt is one of the countries for which the 2019/2020 marketing year will have generally been synonymous with development, with an increase of 2,700 mT (almost 9%) against the previous year, based on increased sales to Italy, Morocco and Rwanda, and despite significant downturns in sales to the Lebanese, Saudi and Emirati markets.

Other countries also participated in this category's trade in 2018/2019 (Costa Rica, United Kingdom, Mexico, Russia, South Africa, Turkey, Canada, Sweden, Ukraine, etc.), either as processors or simply as re-exporters on the worldwide markets for ketchup and tomato sauces. The quantities mobilized by these countries ranged between 26,000 mT and 17,000 mT, for market shares between 1.8% and 1.2% (see the tables of annual variations and, in the appendices, the summary tables of trade at the end of this file).

Some complementary data
* : All estimates of equivalence with raw materials are based on recently revised official coefficients provided as appropriate by national industries or by TomatoEurope.

Full detail tables of exports for each of the sectors mentioned in this report are available on request from the editorial staff of Tomato News: fxb@tomatonews.com

Find all the topics published under the tag "Trade, statistics, Consumption" by entering the keyword "trade" in our fast and/or advanced search module for articles.