15/04/2020 - François-Xavier Branthôme - Consumption - Lire en français
This dossier is one of the articles which were originally to be published in the "Processed Tomatoes 2020 Yearbook", which all attendees in the World Congress of Industrial Tomatoes would have received free of charge upon their arrival in San Juan, Argentina.

Individual consumption and demographic shifts: the drivers of consumption
The slight upturn recorded worldwide has been expressed by a moderate rise in the level of overall individual consumption. During the last marketing year, the average consumer absorbed the equivalent of 5 kg of fresh tomato in processed form, 2% more than on average during the previous three marketing years (4.9 kg/year/pers.), a level that is simply an extension of overall individual consumption over the previous seven years (see appendix). It is therefore necessary to consider the increase in 2018/2019 with a measure of caution, and it should also be noted that this global indication hides significant disparities between the different regions and in terms of progression.
Without going into details that have already been extensively commented on in previous editions, the 2018/2019 study confirms the very high consumption levels recorded once again in the Western European Union (just under 23.0 kg/year/pers.), in Australia-New Zealand (22.0 kg/year/pers.) and in North America (20.0 kg/year/pers.). Consumption in the regions included in the zones described as the "historic base" of the industry remains much higher than in the group made up of central European regions (eastern EU (14.0 kg/year/pers.) and non-Community Europe (12.0 kg/year/pers.)) and the “Mediterranean” (Middle East (13.5 kg/year/pers.), and Mediterranean Africa (11 kg/year/pers.)). As for the other regions, their consumption of tomato products in 2018/2019 did not exceed 8.0 kg/year/pers. (South America) and dwindled to the very low values recorded in the Indian Peninsula (0.2 kg/year/person).

This description of the global situation must be accompanied by contrasting observations in terms of annual development and regional growth drivers. For many of the regions already mentioned among those that drove the rapid growth of the early 2000s, the growth rates determined according to the WPTC study model are actually higher than those of the "historical" group that includes North America and Europe (CAGR 1.36% over the period running 2011/2012 to 2018/2019).
For these emerging regions, the development of consumption has more often been driven by population growth than by an increase in individual consumption, as is indeed the case on a global scale. The strong growth dynamics of the Far East (2.3%), the Eastern EU (3.6%), Australia-New Zealand (2.4%), non-European Europe (2.6 %), the Indian Peninsula (4.2%) and East Africa (5.4%), to name only the most significant, have thus supported an overall development in recent years and even seem to have offset the recorded setbacks in Eurasia and a number of other regions. On this last point, it is important to note that the limits of the study, partly based on trade flows and on declarations of operations, make for difficult interpretation since it is not easy to distinguish on a local scale between a real drop in consumption and a simple slowdown in supply flows.
Ultimately, most of the developments observed can be attributed to population growth, but in certain regions – and not the least important ones, since this seems to be the case in the European Union and the Far East – it is indeed individual consumption and therefore consumer interest in tomato products that supports overall growth. 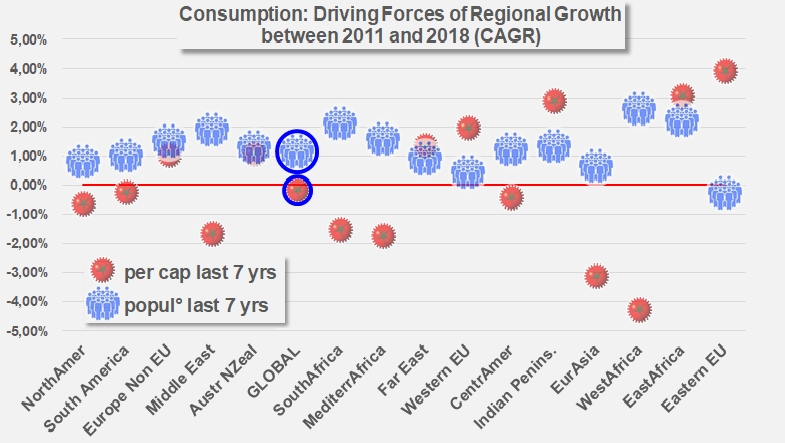 In short, this is encouraging, and perfectly consistent with the major trends in consumer concerns identified by many experts. Recent studies conducted by Tastewise have shown that "health" aspects now overshadow the environmental concerns of consumers who care about the issue of sustainability.

Tastewise is a food information start-up powered by artificial intelligence. It works by analyzing more than two billion interactions across social media platforms along with more than three million online recipes and a menu database of 274 000 restaurants. It uses this information to identify emerging consumer trends. A lot of the data is from the US exclusively, but is still used by Tastewise to form opinions of global trends.
Its latest report discovered that compared to a year ago, 23% more consumers in the US are prioritizing vegan and sustainable diets. And health, not environment or animal welfare, is the biggest driver. While 39% of consumers' conversations regarding sustainability focus on health benefits, only 1% discuss animal rights.

Tastewise CEO Alon Chen, a former Google executive, told FoodNavigator that the "extremely strong correlation with health preferences" identified in the report meant the food industry risks facing a consumer backlash if it doesn't make products that tick both boxes of sustainability and health.
“The conclusion is that we, the food industry, really need to understand that we need to find sustainable solutions, but also make sure they are addressing the health preferences of people.”

In this area, the global tomato processing industry has clear arguments at its disposal, based on historical experience and scientific evidence. It could not be better positioned to communicate on its environmental assets and its health benefits, and to capitalize on its image to consolidate and expand its performance in terms of consumption.

Some complementary data
The global trade in tomato products in 2018/2019 indicated a measured increase in quantities. 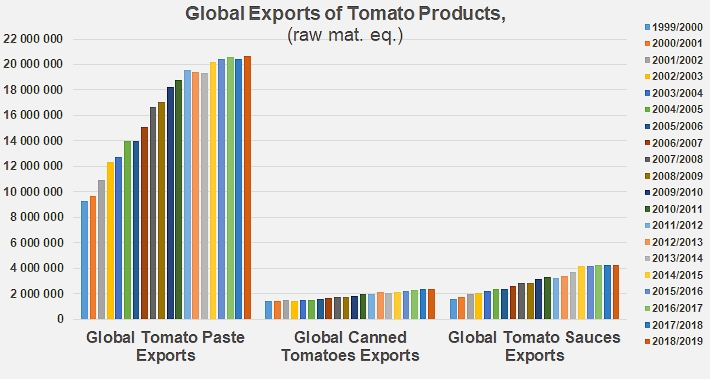 The 2018/2019 marketing year saw a slight recovery of consumption. Annual values and their variations are probably less contrasted than suggested by the model used in the WPTC study, but on the whole, they seem to be representative of the trends observed by experts in the sector. 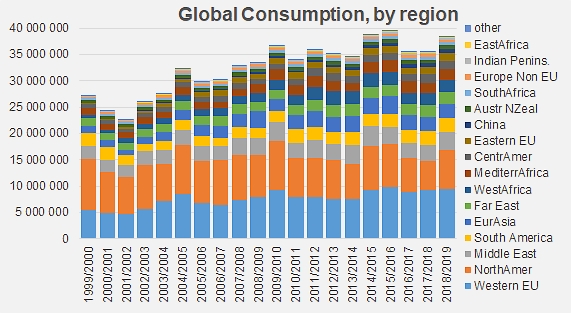 Parallel between consumption trends in the "historic base" regions and in emerging regions: slightly in the minority twenty years ago, the latter now account for a very large half of overall consumption of tomato products. 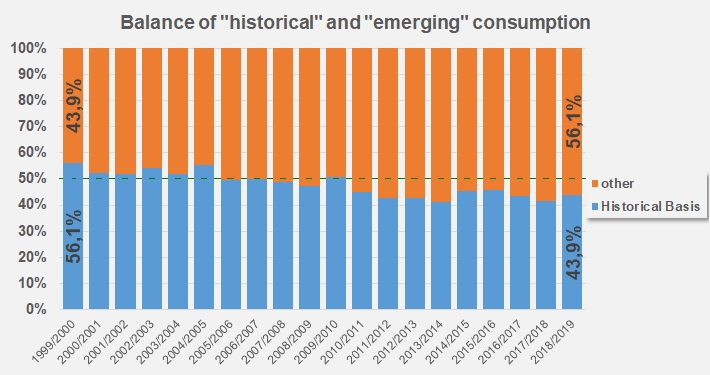 After a decade of rapid growth, overall individual consumption is now evolving irregularly, in a succession of increases and decreases that modify the overall level around an average close to 5 kg/year/person (raw tomato equivalent). 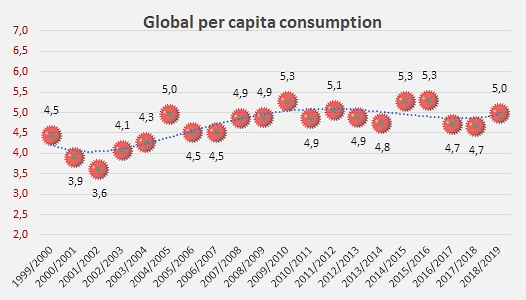 Strong contrasts mark the different regional levels of individual consumption of tomato products, from 20 to 25 kg for the highest values in developed regions down to a value of virtually nil in the Indian Peninsula. 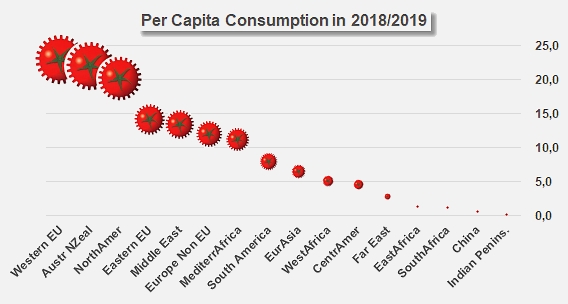 For most of the regions defined in the study, the growth in individual consumption was stronger before 2011/2012 than after. This almost generalized decline has contributed to slowing regional and global dynamics of consumption growth. 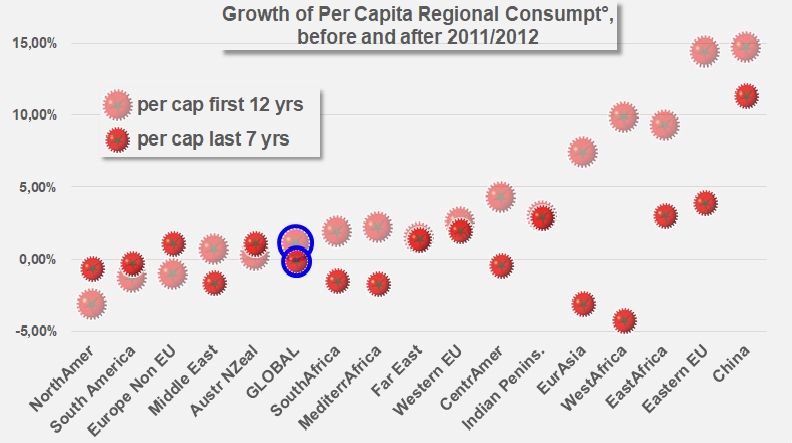 The 16 regions studied in the WPTC survey, and their levels of consumption.

For further details regarding the potato processing market:
https://www.globenewswire.com/news-release/2019/10/01/1923183/0/en/Potato-Processing-Market-To-Reach-USD-37-41-Billion-By-2026-Reports-And-Data.html