17/05/2019 - François-Xavier Branthôme - Architecture of Trade
The sauces & ketchup trade in 2017/2018
Contrary to the extreme polarization that characterizes the world's canned tomato category, the global market for tomato sauces & ketchup remains a competitive sector where many supplier countries take part – including several that only operate as remanufacturers – and where the scale ratios between exporting countries are much narrower than for the paste or canned tomato categories.
In 2017/2018, the fifteen main exporting countries only accounted for 86% of the total offer. Slightly more than 1.378 million mT of finished products were shipped last year, of which 1.186 million mT were sold by one of the leading countries of the category. This atomization of origins does not however prevent a few countries from emerging as dominant players: with more than 347 700 mT exported, the United States alone accounted for one quarter of total foreign sales last year. The USA are followed by the Netherlands in terms of foreign trade, with Dutch exports nonetheless accounting for close on 241 000 mT and 17.5% of total shipments for the year. With the addition of the volumes exported by the Italian industry (129 000 mT of finished products), more than 52% of the world's exports of sauces & ketchup were recorded by just three countries.
Several industries of intermediate importance also played notable roles at a worldwide level: Spain, Germany and Poland (the new arrival in this top group for the category) practically ranked equal during the last commercial season, with all three exporting similar volumes of between 68 000 mT and 78 000 mT, thereby each accounting for approximately 5% to 6% of the worldwide market.
Belgian, Portuguese and Chinese exports each absorbed approximately 35 000 mT to 40 000 mT of products and accounted for an overall total of about 8% of the volumes exported around the world.
These nine countries are mainly known for the scale of their processing industries, but nonetheless only accounted, over the past marketing year, for slightly more than three quarters of total supplies, with total volumes of just over 1 million tonnes. Six other national industries (Egypt, Mexico, the United Kingdom, Costa Rica, South Africa and the Czech Republic) also played a role in this segment, with volumes between 18 000 mT and 28 000 mT (between 1% and 2% of the total for the 2017/2018 marketing year). About fifty other countries shared the remaining 192 000 mT.

The western part of the European Union and the North American continent are among the very big destination markets: together, these two outlets absorbed more than 802 000 mT of finished products in 2017/2018, approximately 68% of all worldwide exports, most of which were shipped to the United Kingdom, Germany, France, Belgium, Canada and the United States. A few countries of Central America (Mexico, Guatemala, Dominican Republic, Venezuela, etc.), the Far East and the eastern part of the European Union also featured among the noteworthy importers for this category.

Although the relative dispersion of supply and consumption areas generally reduces the effect of ordinary annual variations, a few notable increases and decreases influenced the trade flow during the 2017/2018 marketing year.
Among these significant shifts, one particularly noteworthy increase was recorded for volumes imported by nations of the western part of the European Union (+22 700 mT), particularly by Germany, France, the Netherlands and the United Kingdom, as these countries proceeded to reorient their supply sources to the advantage of the Netherlands, Italy, Spain and Poland, and at the expense of foreign sales from Belgium and Portugal. This increase is the only one to have benefited European exporting countries, given that the other significant positive development over the year was recorded for Central American purchases, which were logically supplied by operators in the US and Costa Rica.
The increase in Central American purchases was not however sufficient to compensate for the effect on US sauces & ketchup of the drastic drop in Canadian purchases. Compared to the average of the three previous marketing years, US sales of sauces to Canada in 2017/2018 (203 000 mT) fell back by about 43 000 mT of finished products, which is more than 17%.

In total, worldwide exports of tomato sauces & ketchup increased by less than 1% in 2017/2018, but the TOP15 group of supplier countries only partly benefited from this growth. Operators in Italy, the Netherlands, Poland, South Africa, Spain and Costa Rica improved their performances, as did China whose sales recorded a slight recovery in Ghana and Côte d'Ivoire. Conversely, products from the US, Belgium, Portugal and Egypt lost a few market shares over the past year, with final results for the TOP15 recording a slight contraction of approximately 3 500 mT compared to the 2016/2017 marketing year. 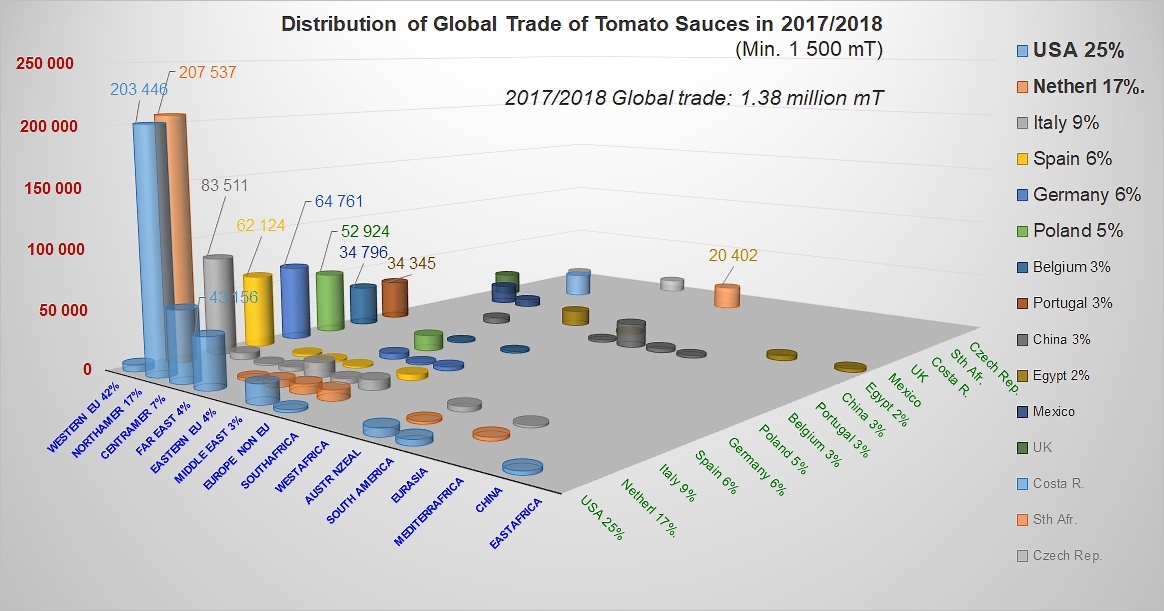 Over the latest marketing year of 2017/2018, the US industry is the only one with a global reach that recorded a net decrease in its worldwide market share, while processors in the Netherlands, Italy, Spain, Germany, Poland and Portugal managed to extend their outlets. 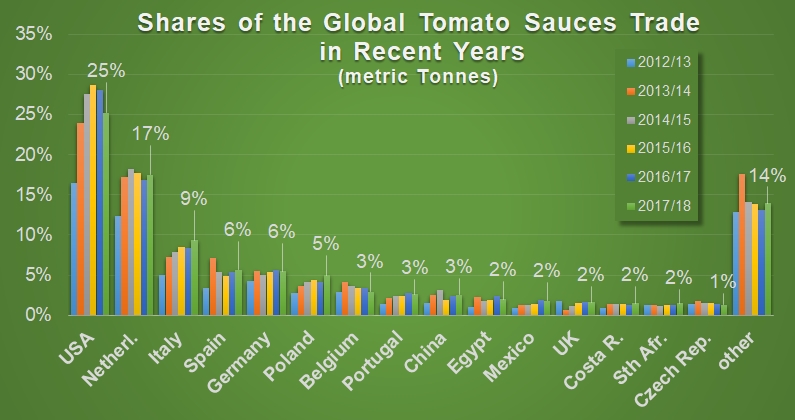 Tonnage figures indicated for suppliers and for destinations are total volumes – the diagram presents all of the sauces & ketchup exchanges for the marketing year. 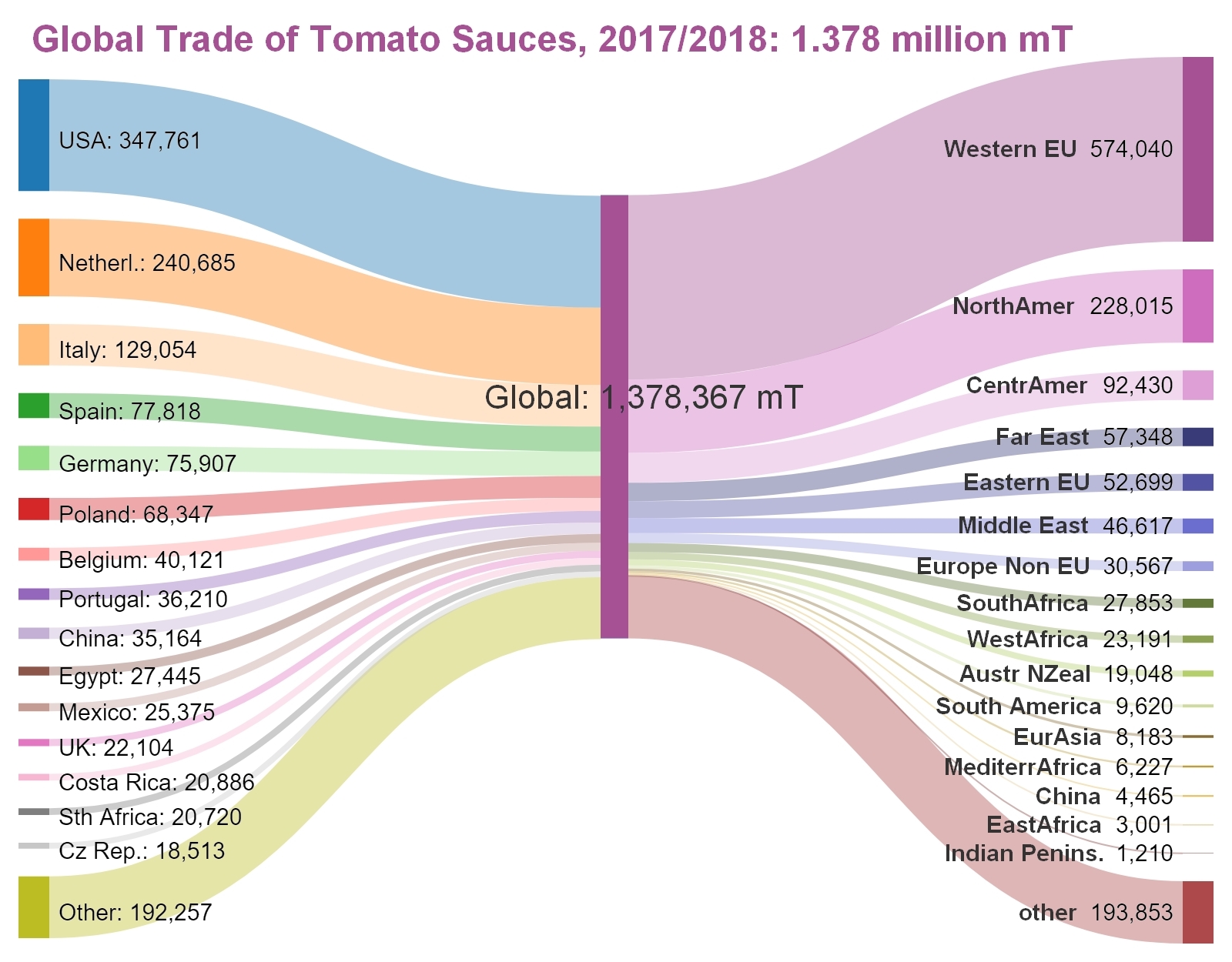 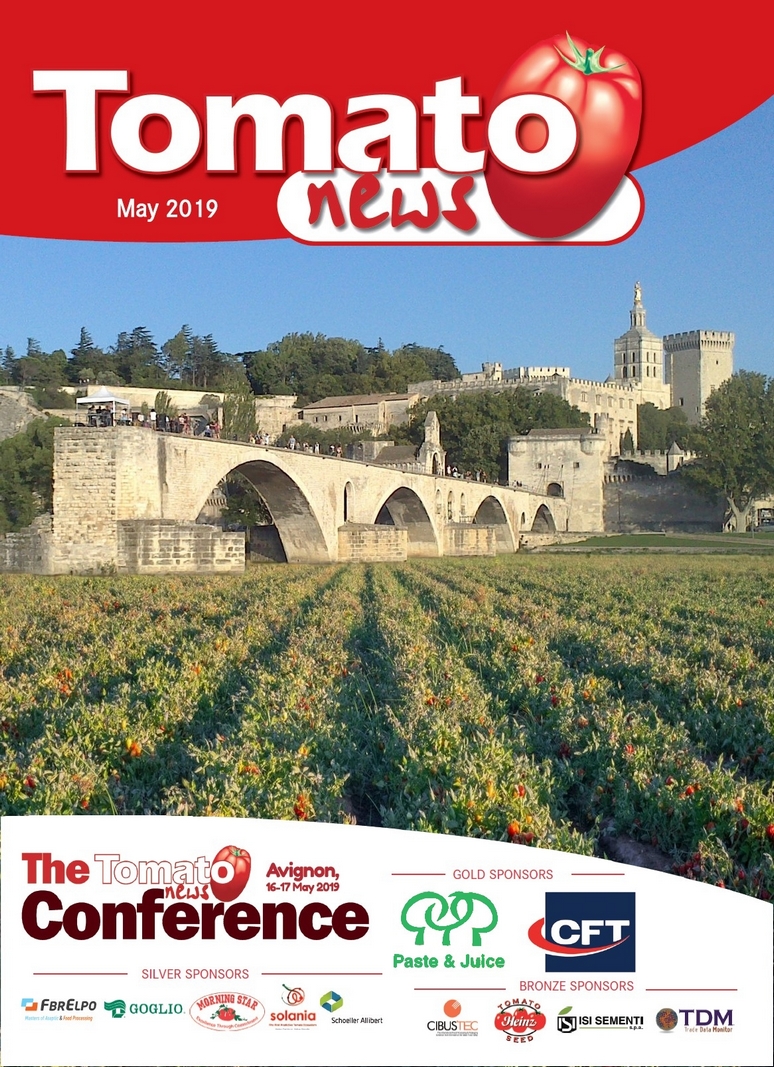 This article is an extract from the 2019 Processed Tomato Yearbook which was distributed to attendees at the Tomato News Conference and which can be purchased from this website (GET LISTED) or by sending the order form.
Related articles