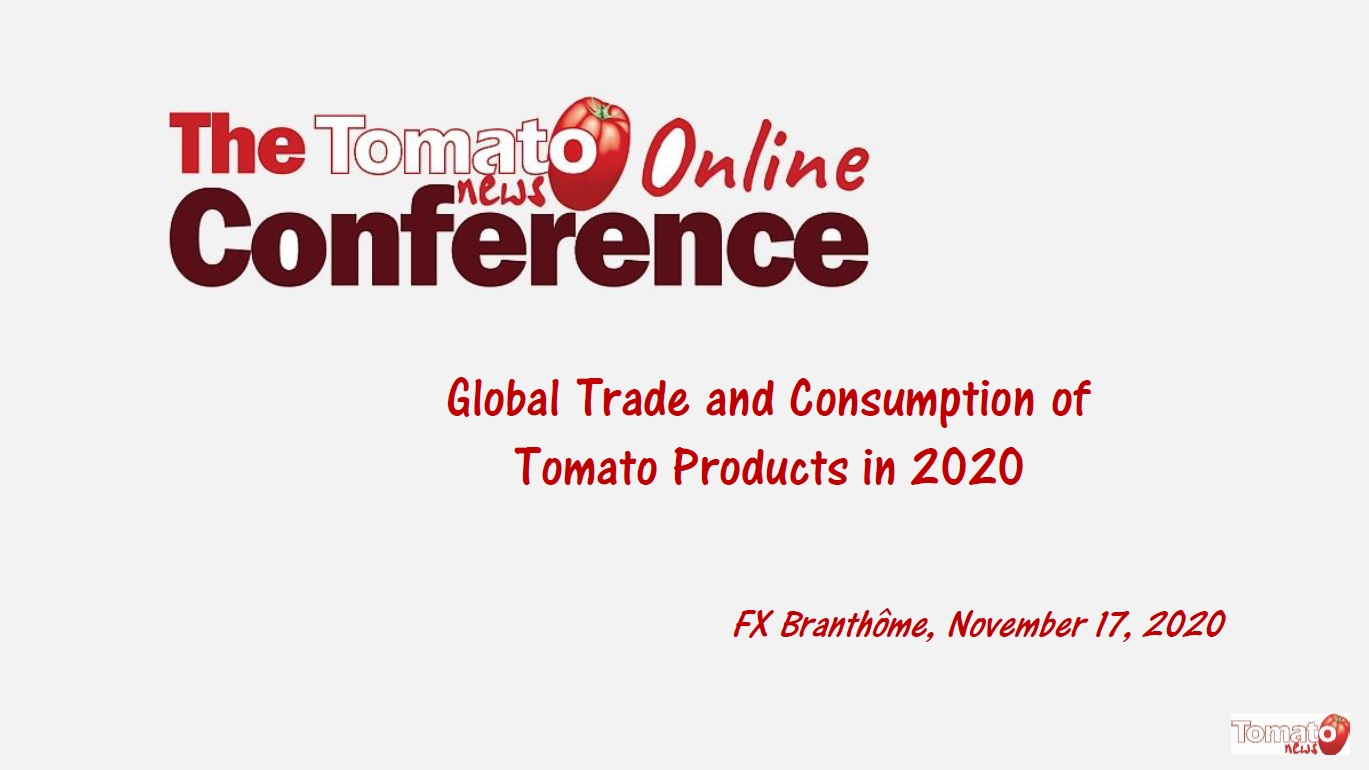 “At first, I would like to thank the WPTC for helping me issue these thirteenth study and giving me the opportunity to present the latest estimates for global consumption of tomato products. 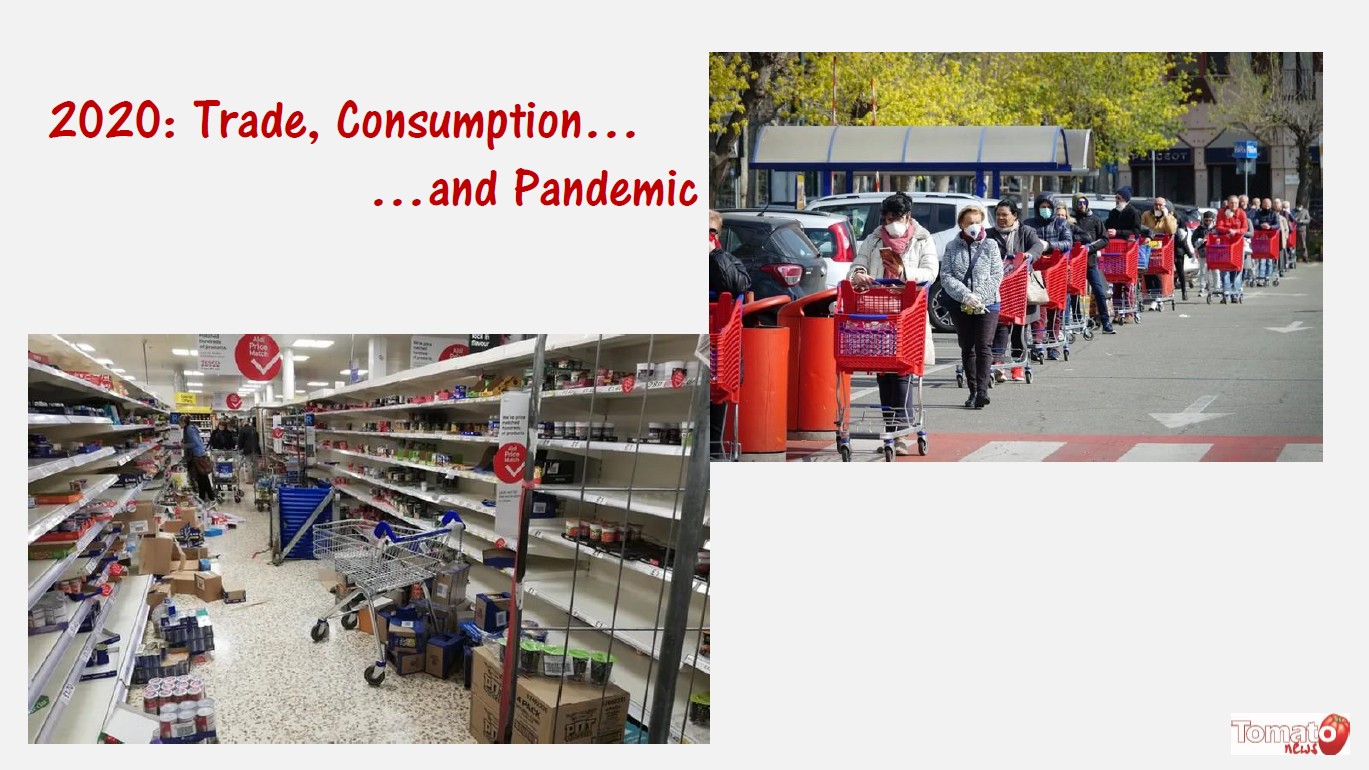 Ladies and gentlemen, what will remain of 2020 for many of us, further to the shortened and often half-hearted tomato season, is this: endless queues in front of supermarkets, unavailable products and disoriented consumers, empty or spectacularly disorganized shelves, posters announcing rationing and rising prices...
These images testify to a shift in habits of purchasing and consumption, and we don't know whether it will be temporary or not. All over the world, industry operators working with the catering, restaurant and retail sectors have had to manage the effects of this reorientation. Many of them have spoken of a surge in demand and a truly frantic pace of deliveries for products intended for family consumption. This was to the point that factory warehouses were fast reduced to storing only products intended for catering and restaurant outlets, as these sectors were hit the hardest by distancing and containment measures and, in the best of cases, moved at idle speed. 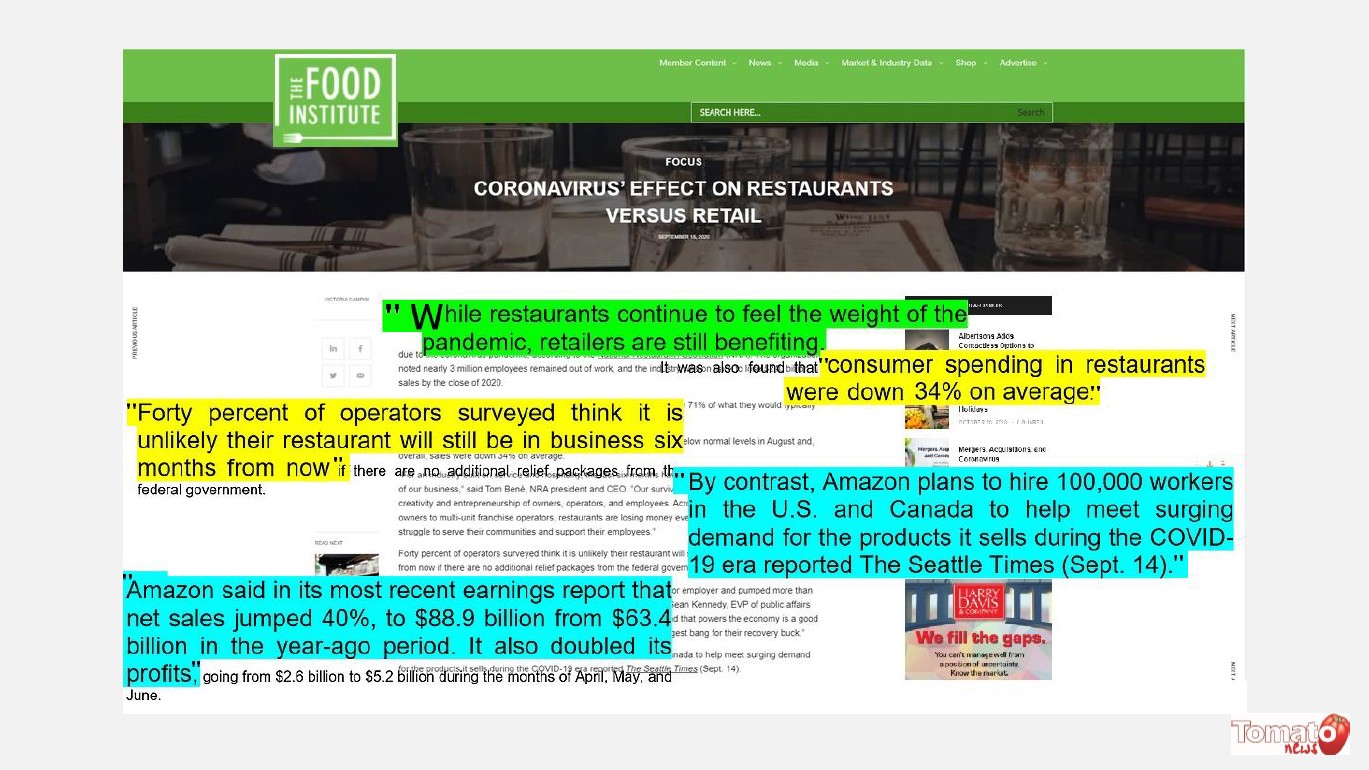 This is what the NRA (the National Restaurant Association – the American body that represents nearly 310,000 restaurants in the US) described in a statement published by the Food Institute in September – I quote:
”While restaurants continue to feel the weight of the pandemic, retailers are still benefiting.”
“…Consumer spending in restaurants remained well below normal levels in August and, overall, sales were down thirty four 34% on average.”
“By contrast, Amazon plans to hire 100,000 workers in the U.S. and Canada to help meet surging demand for the products it sells during the COVID era.”
“Amazon said in its most recent earnings report that net sales jumped 40%, to 89 billion dollars, from 63 billion dollars in the year-ago period. It also doubled its profits…”
More recently, US papers revealed that “U.S. online sales for the months of November and December were expected to reach 189 billion US Dollars, representing a thirty three 33% year-over-year increase and setting a new record. If […] stores are again shut down, figures could go even higher and consumers would then be expected to spend an additional eleven 11 billion US Dollars online, bringing total sales to more than 200 billion US Dollars, or a 47% year-over-year increase”.
I would like to point out that the reorientation of purchasing methods towards online distribution channels is synonymous with consumption "at home", and these behaviors have turned out to be rather favorable to our sector. 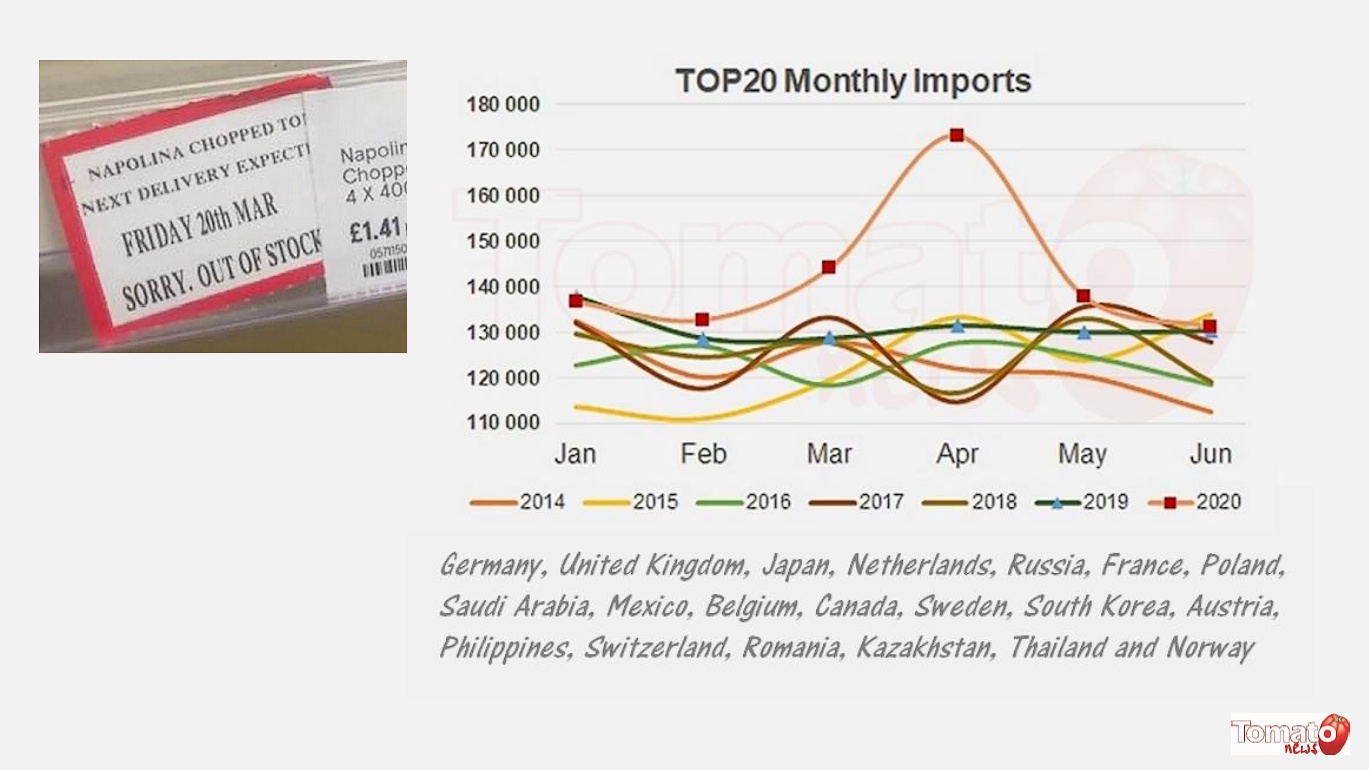 From the point of view of our processing companies, this sudden inflation in demand resulted in a rapid increase in the quantities delivered, especially in March and April 2020. Purchases of paste in particular increased by 57,000 tonnes (or 22%) compared to the same period of the previous year and by more than 66,000 tonnes (26%) compared to the average of the three previous years. Similar but less pronounced dynamics were recorded for the worldwide trade in canned tomatoes and sauces.

It might be thought that the upturn in global activity observed last year was based solely on the major event of the year, namely the crisis caused by the CoVid pandemic. This seems to be only partially true, as already shown by the observations we would have commented last March in Argentina in San Juan if we had been able to meet there.  These encouraging figures for 2018/2019 were also presented on the Tomato News website in our reports last April. 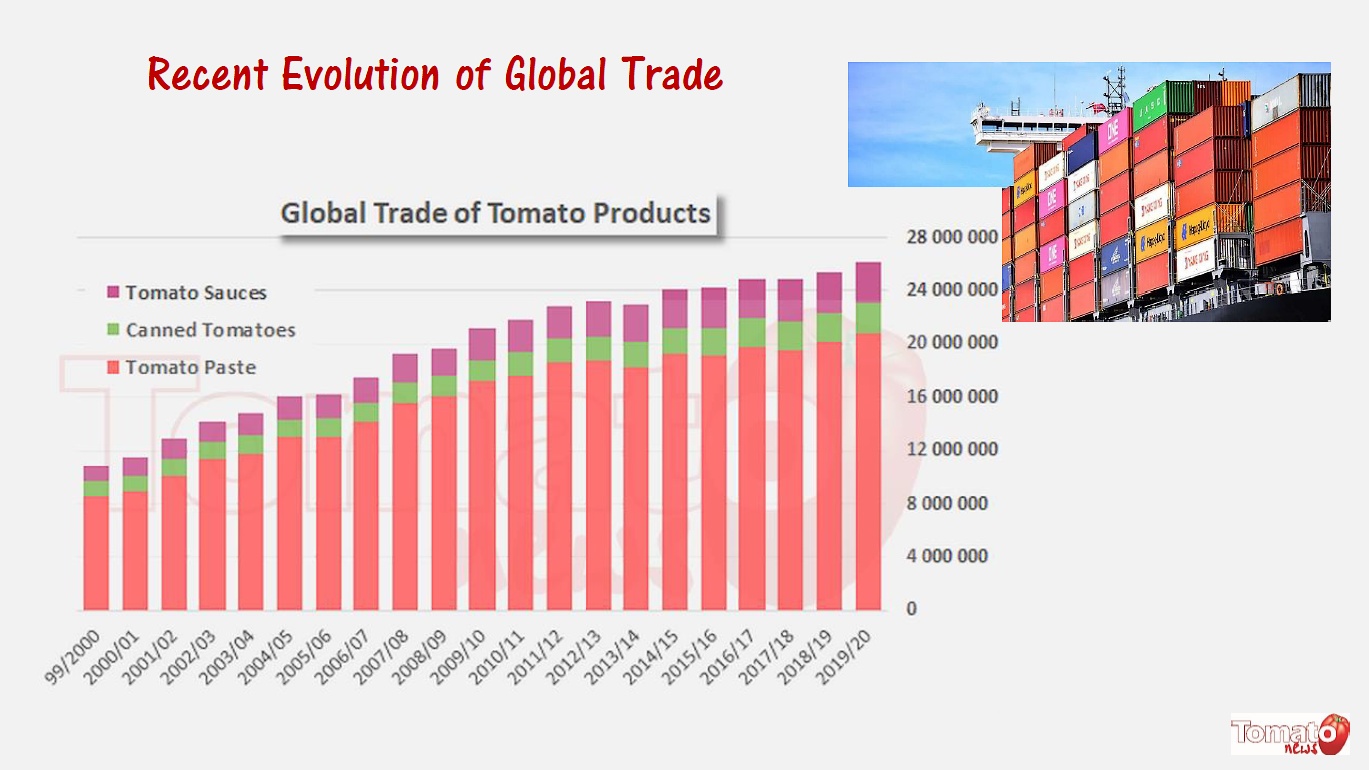 Indeed, the marketing year ending in last June confirmed a degree of recovery in the growth rate of world exports. Progression has been roughly 4 to 5 times slower over the last ten years (between 2010 and 2020) than it was during the previous decade (from 2000 to 2010); but the export dynamics of our sector have recorded a fairly clear recovery over the past three years. In a detailed breakdown, it is the sauces sector that has seen the fastest growth of the quantities exported (with a compound annual growth rate close to 3.5% per year), while the development of exports from the concentrated purees sector remained rather slower (about 2% per year). Between these two categories, exports of canned tomatoes continue to grow at a rate that has been virtually unchanged for twenty years, of around 3% per year. 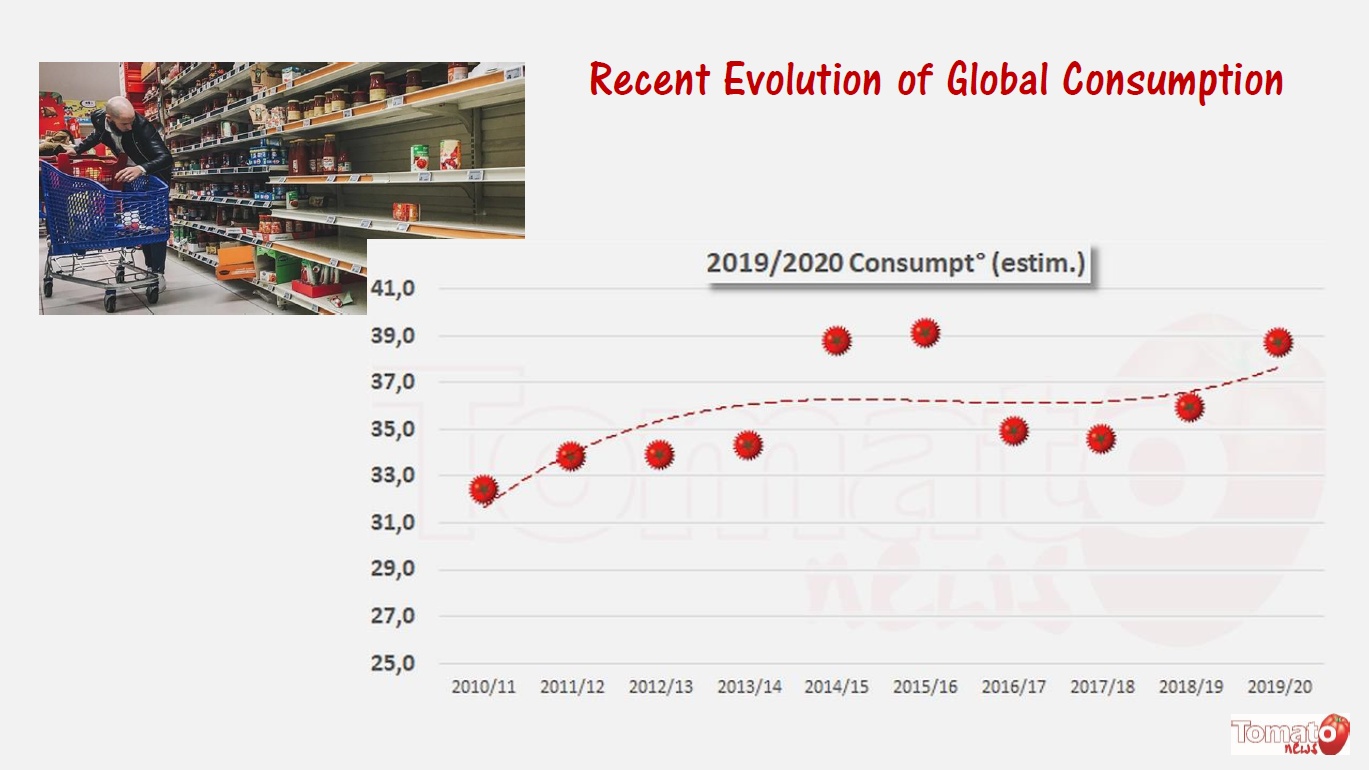 In fact, taking into account known production and inventory data, we can state that the overall consumption of tomato products has, on the whole, increased significantly during the past marketing year, even if actual variations from one year to the next are very probably less pronounced than shown by the results of the latest study carried out for the WPTC.
In the end, the quantities consumed probably came close to 39 million tonnes in “fresh tomato equivalent” last year, which is a 10% increase in total. The figure is impressive, but only part of this increase is a result of the boom caused by the CoVid crisis (and therefore potentially only temporary), while the rest seems to be driven by an increase in demand.

The reality of substantial growth is good news; however, we must remain cautious. Given the very exceptional circumstances of the recent marketing year, what we experienced last year may not happen again this year. Even if the current tightening of anti-CoVid measures is likely to encourage “at home” consumption of our products, we cannot now affirm that these dynamics will be maintained for the current marketing year of 2020/2021 or beyond. 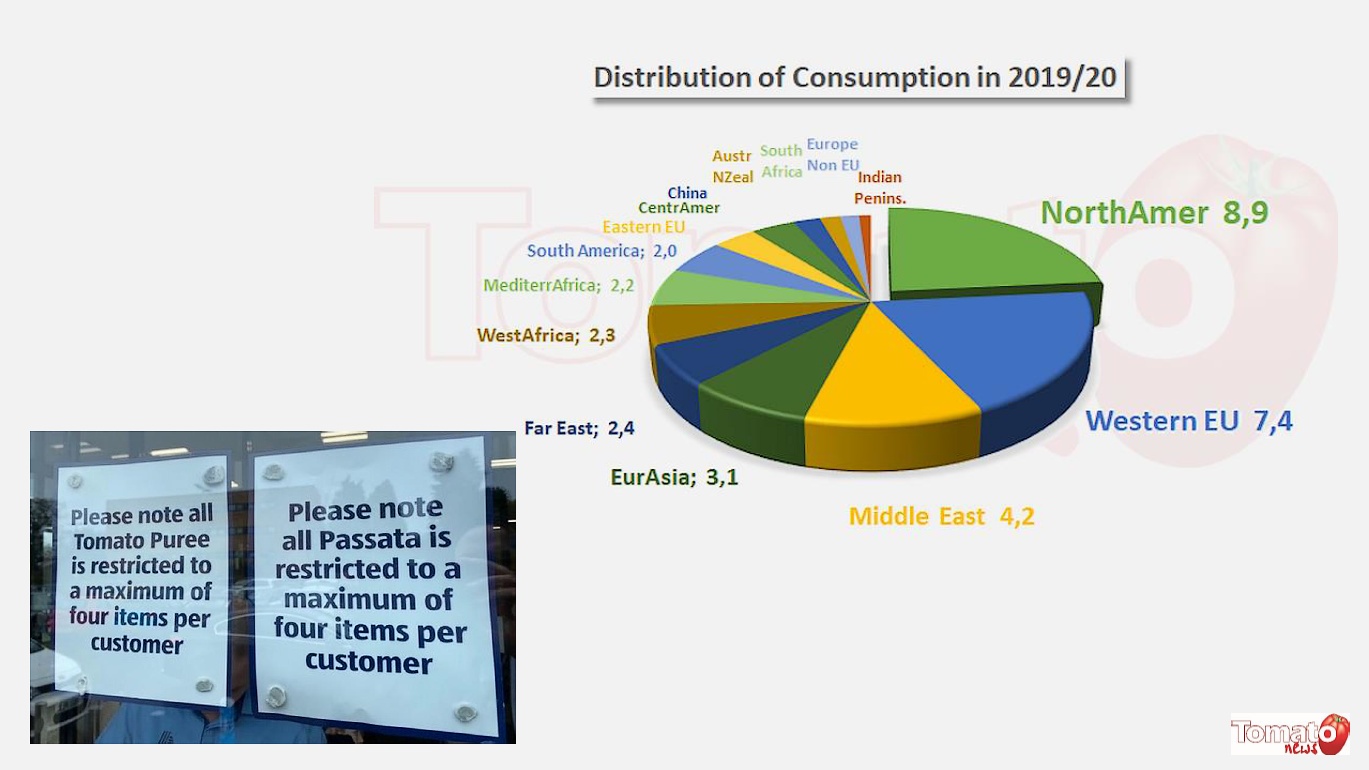 In any case, the last marketing year did not bring about any major alterations in the hierarchy of consumption regions. North America and the Western EU are still positioned as the largest consumption regions for tomato products, while emerging regions like the Middle East and Eurasia are occupying an increasingly large place in the global landscape. In contrast, South and East Africa, the non-EU countries of Europe, and the Indian peninsula, represent only a very small part of overall world consumption (less than 4% in total).

For these young or emerging markets, which record the lowest per-capita consumptions in the world – between a few hundred grams and less than 2 kg per inhabitant per year – it is clear that the potential for growth is greater than it is in mature markets like North America, Australia-New Zealand and a few others, where levels already reach or exceed the equivalent of 20 kg… 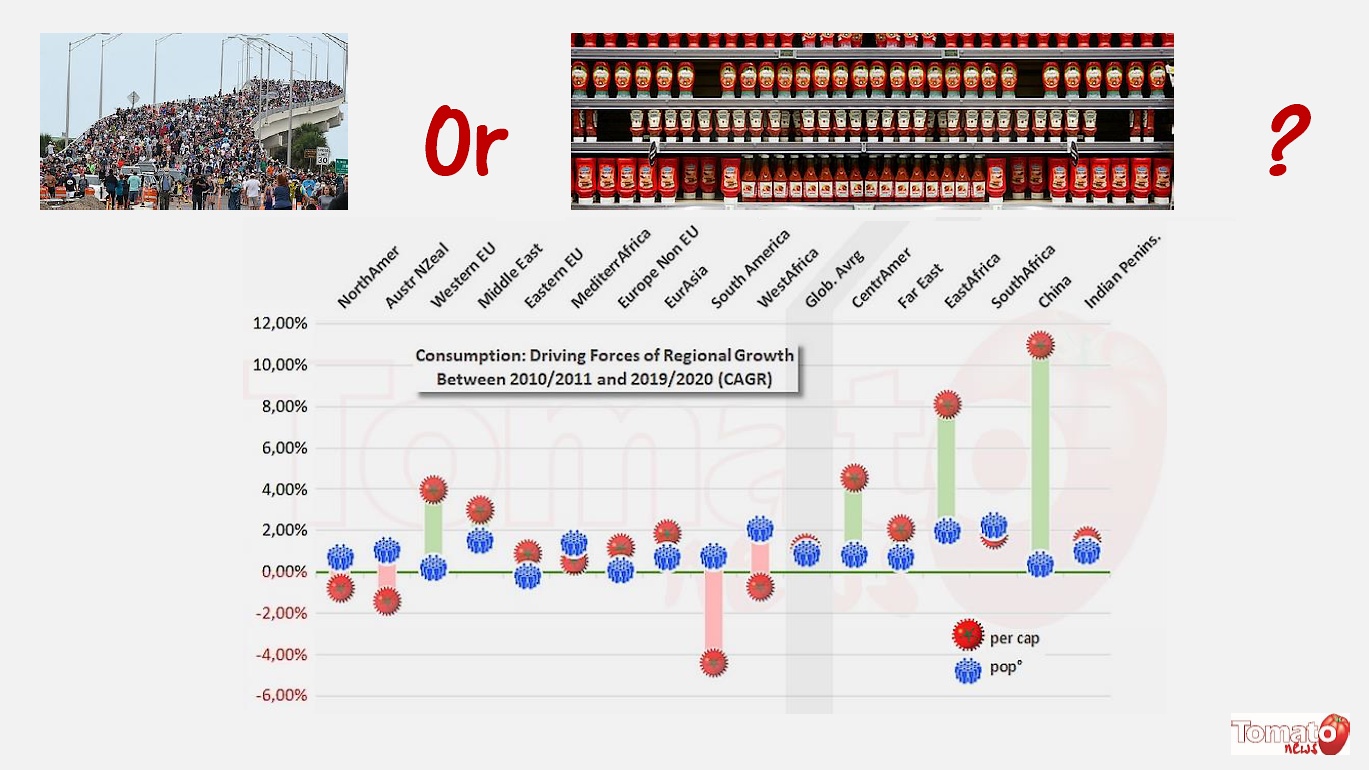 In the regions with sustained growth, like China, East and South Africa, Central America, the Middle East or the Western EU, the increase in consumption is mainly driven by growing individual interest in tomato products. For several other regions (the Far East, Eurasia, the Indian Peninsula, Mediterranean Africa), the increases are due to a combination of less contrasted demographic and individual components.
Overall, global growth in consumption has been achieved over the past ten years at an annual rate very close to 2%, driven by “soft” individual dynamics (slightly above 1%) and a demographic growth of close to 0.9%.

To conclude, and before answering any questions, here is a “photograph” of regional consumption for the 2019/2020 marketing year. 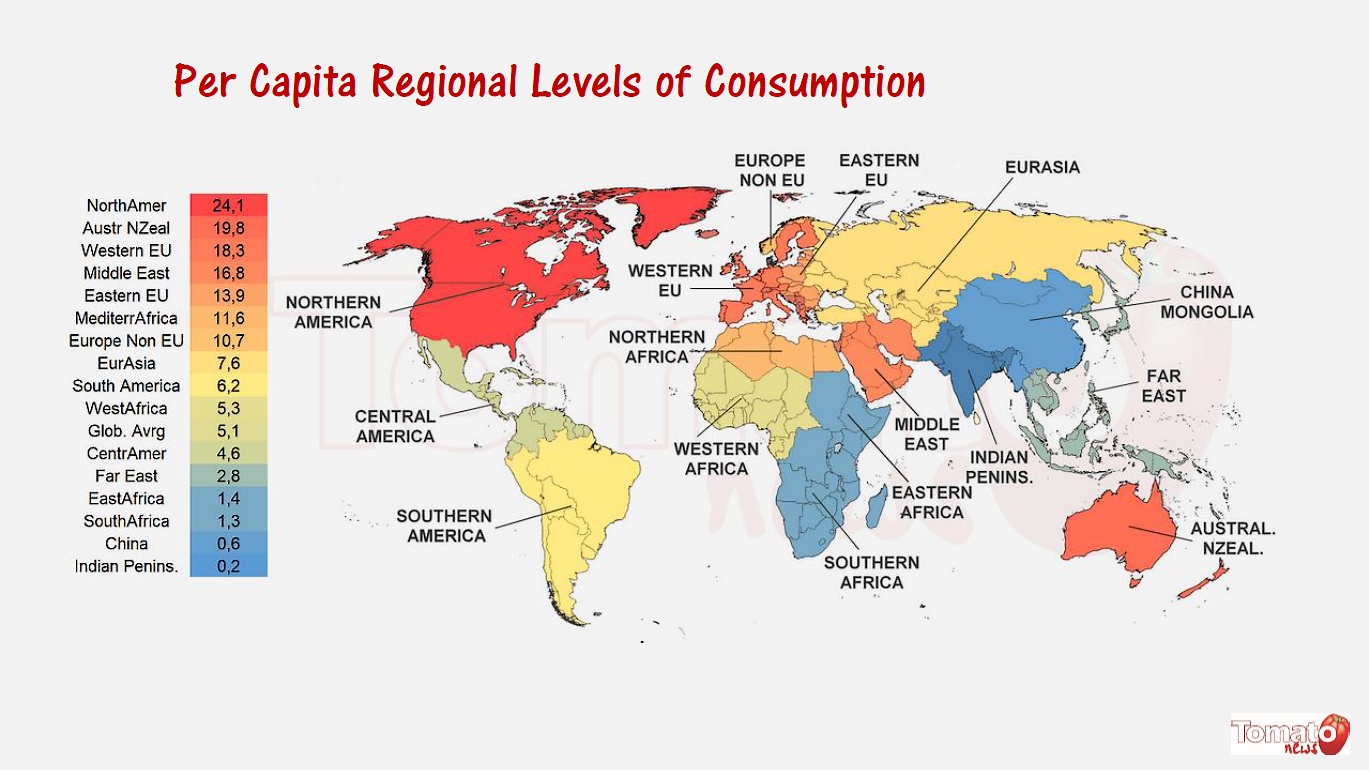 I thank you for your attention”.

The profile of annual stocks’ estimates are not without pointing out the “Cumulative Difference between Production and Consumption” described in the Stilwell’s Cycle. 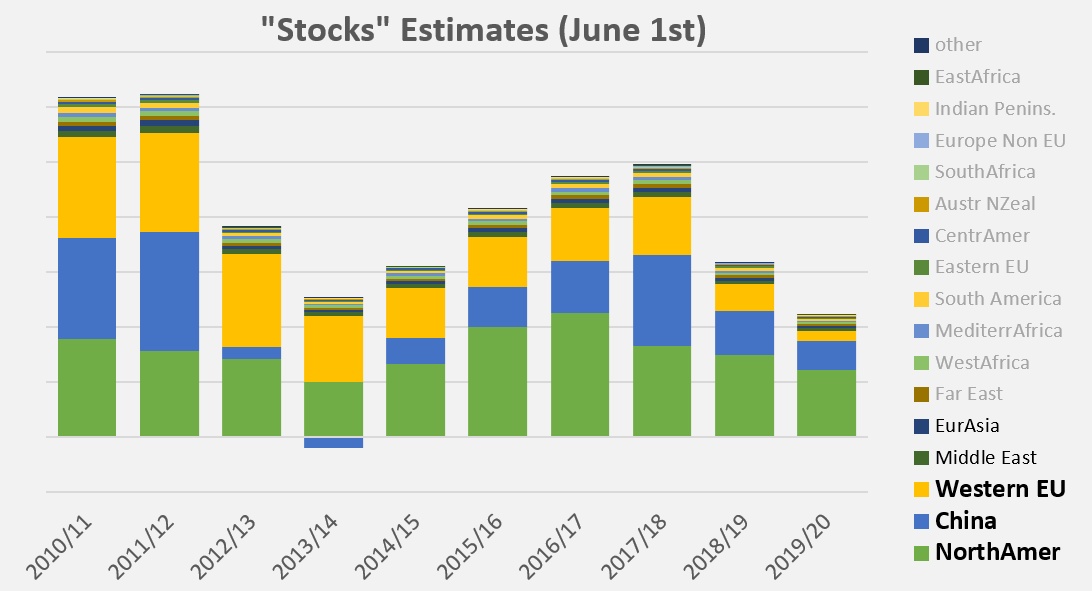 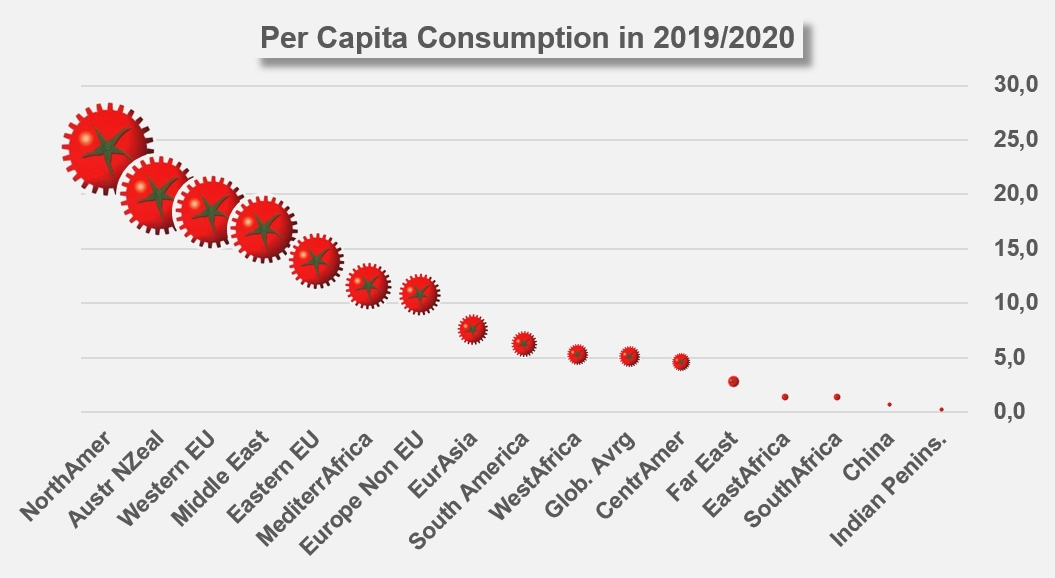 
Most of other presentations from the Tomato News Online Conference will be transcribed during the coming weeks but all slides are already available here.
The videos of all the presentations will also be released in a few weeks (they are for now reserved for the webinar attendees).