03/10/2019 - François-Xavier Branthôme - Read in French
For the first time, paste exports exceed the 400 000 tonne threshold
For the first time in the history of Spanish foreign trade, exports of tomato paste have exceeded the threshold of 400 000 metric tonnes by a generous measure, as the results of the 2018/2019 marketing year indicate total volumes exported of close on 411 000 mT. This recent performance places in Spain in third position worldwide for this sector in 2018/2019, right behind China and Italy, but ahead of the USA. Spain had not climbed to this position since 2006/2007.
Annual growth over the past seven years averages approximately 11%!
In order to reach this level and despite a difficult market situation, the Spanish industry has managed to increase its foreign sales by close on 39 000 mT (more than 10%!) compared to its result in 2017/2018 (372 000 mT). In demonstration that this result stems from a long-lasting impetus, it is the outcome of uninterrupted growth over the past seven years at an average annual rate of about 11%. Export volumes over the past marketing year are actually 25% higher than the average of the three previous years (327 700 mT of finished products between 2015/2016 and 2017/2018). 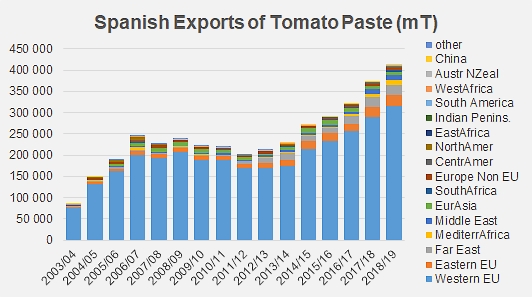 Barely reaching 200 000 mT in 2011/2012, Spanish exports of tomato paste have more than doubled in seven years.
These Spanish foreign sales of pastes and the development observed over recent marketing years can mainly be attributed to the European market (EU 28). Despite the fact that, as outlets, they have been decreasing slowly in size since the beginning of the 2000s, European markets still accounted for 83% of Spain's exports in this category over the past three marketing years.
The strategic importance of the European market as an outlet for the Spanish industry is undeniable: the result of the 2018/2019 marketing year (342 000 mT) was a 9% increase compared to the previous year (314 100 mT) and a 22% increase (+62 000 mT!) against the average of the three previous years. This growth is way ahead of increases recorded in any other region, including the most dynamic – Mediterranean Africa – which only grew by 7 600 mT over the same period (see the general presentation table of paste exports in the appendix).
It comes as no surprise that the biggest trade flows of recent years (by order of importance) have been those with Italy (20% of Spain's "EU" activity), Germany (18%), France (15%), the UK (14%) and the Netherlands (10%). Countries of the eastern part of the European Union have only absorbed a very small proportion of Spain's paste exports: the Polish market, which is the main outlet of that sub-region, only took in about 4% of the volumes shipped to the EU as a whole. 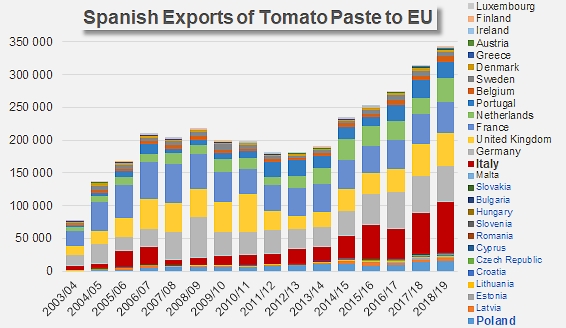 The average annual growth rate of Spanish exports over the past seven years on markets of the EU28 only reached 9.6%.
The Spanish industry has also considerably developed its operations outside of the European market: over the past seven marketing years, the average annual growth rate has exceeded 19%. Although they were almost anecdotal fifteen years ago (6 900 mT in 2003/2004), sales of Spanish paste outside of the EU absorbed close on 69 000 mT of finished products in 2018/2019. Major trade destinations where Japan, Egypt, South Africa, Russia, Saudi Arabia, etc. 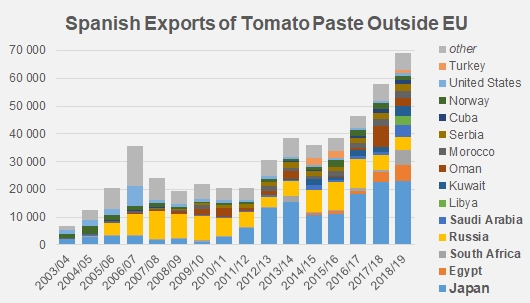 In 2018/2019, the turnover for exports of pastes amounted to EUR 325 million (slightly less than USD 371 million), which is a 12% increase compared to the average performances of the three previous marketing years. This impressive increase in export volumes has compensated the effects of a very aggressive price policy, which has been applied in recent years by a number of Spanish operators.
Canned tomato exports: still searching for the right dynamic
The Spanish performance in terms of canned tomato exports has not recorded the same success as the paste sector. Although the volumes involved (close on 132 000 mT in 2018/2019) position the Spanish industry in second place worldwide, well ahead of the United States, they nonetheless remain limited compared to Italian results, and are unable to stand as any real competition for the worldwide leader of this category.
Indeed, after spectacular growth between 2010 and 2013, Spain's foreign sales of canned tomatoes have slowed in recent years. In 2018/2019, the volumes exported were 4.5% higher than in 2017/2018 (126 000 mT), but barely up to the level of the average performance of the three previous years (131 300 mT), after progressively decreasing at an average rate of -4% over the past six marketing years.
Even more so than the paste sector, Spanish exports of canned tomatoes are almost exclusively shipped to the European markets (EU28), which have absorbed close on 95% of this category in recent years. The main outlets of canned tomatoes from Spain are France, the UK, Portugal, Germany, etc. 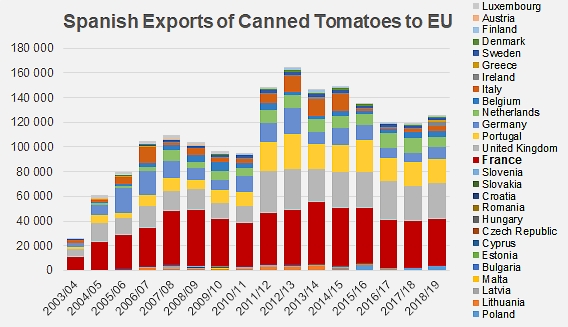 The turnover generated by canned tomato exports has also recorded a clear drop: the value of exports in this category amounted in 2018/2019 to slightly more than EUR 57 million (about USD 65 million), which is 4% more than in 2017/2018, but 8% less than the average of the three previous marketing years (2015/2016, 2016/2017 and 2017/2018).
Exports of sauces
Since the 2010/2011 marketing year, which had signaled the beginning of a recovery for this category, Spain's foreign sales of sauces have grown at an average annual rate in excess of 9%. This development has been mainly supported by European outlets (EU28) and has taken the volumes exported by Spanish operators to 77 900 mT in 2018/2019, a 5% increase against the results of the previous year and a 13% increase compared to the average of the three previous marketing years (approximately 68 600 mT). France alone absorbed almost half of the overall quantities of sauces exported by the Spanish industry during the past three marketing years, with about 37 000 mT of finished products shipped (see appendix). Overall, the other main countries that bought Spanish sauces (Germany, the UK, the Netherlands, Portugal and Italy) did not account for more than a third of Spain's total operations in this category.
With revenue generated by exports of EUR 68.5 million in 2018/2019 (approximately USD 78 million), the sauces sector recorded an increase in its results of more than 4.5% compared to 2017/2018 and of more than 5% compared to the average of the three previous marketing years. 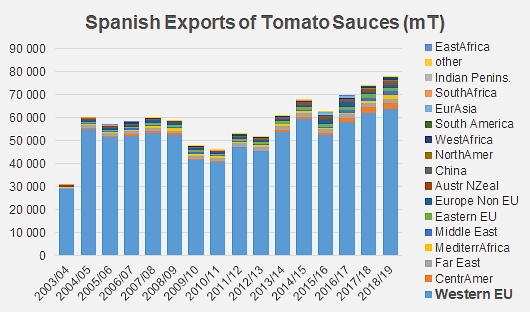 The volumes of Spanish sauces exported to countries of the EU28 amounted to 86% of the total, but the proportion of sales outside of the EU has tended to increase notably in recent years.
In total, Spanish exports of tomato products amounted to a value of close on EUR 451 million (approximately USD 514 million) in 2018/2019. 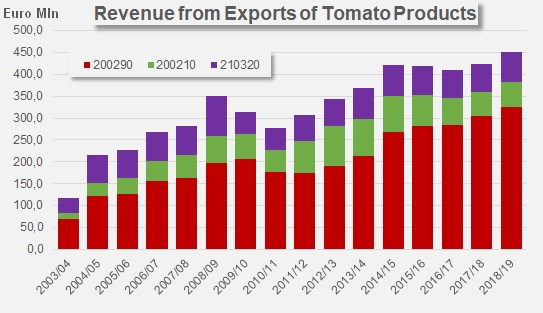 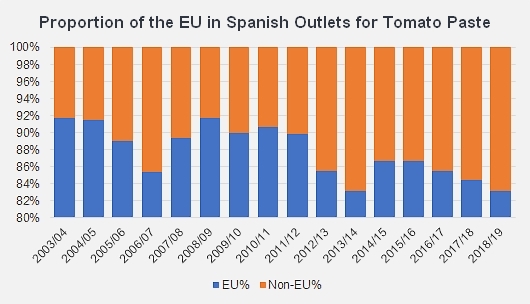 Summary table of Spanish exports of paste to main outlet regions, over the past nine marketing years.

Spanish exports of pastes are mostly dependent on the product categories of more than 30°Brix and, to a lesser extent, on products at lower concentrations, either in industrial packs or food-service conditionings. 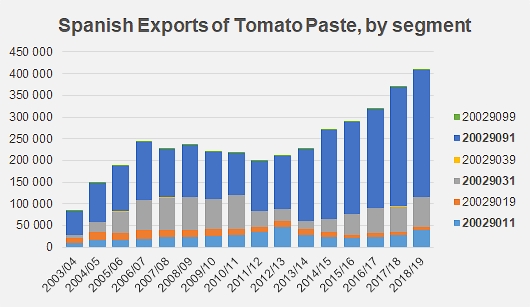 Detailed figures for Spanish exports of sauces to countries of the EU28. 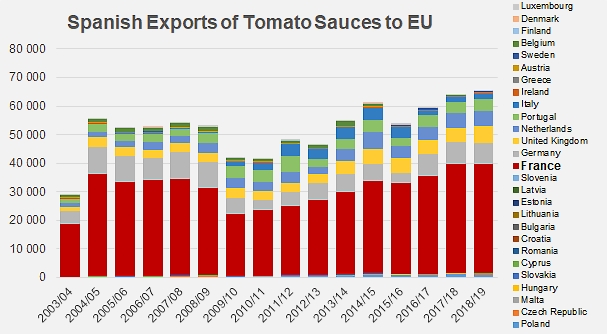 Detailed figures for Spanish exports of sauces outside of the EU. 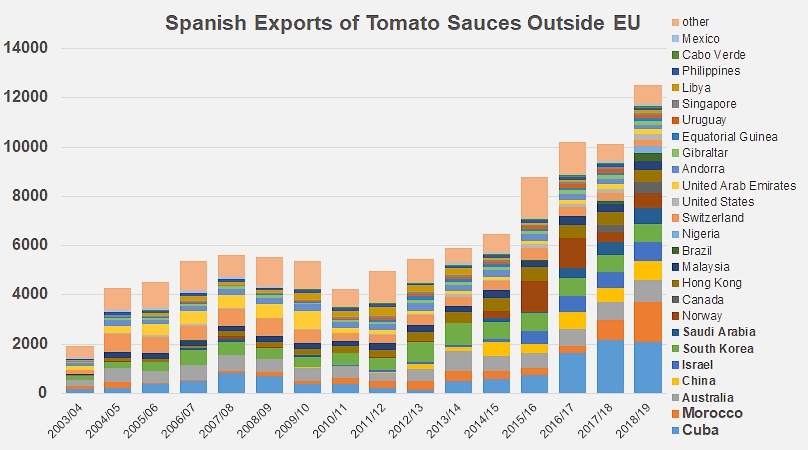