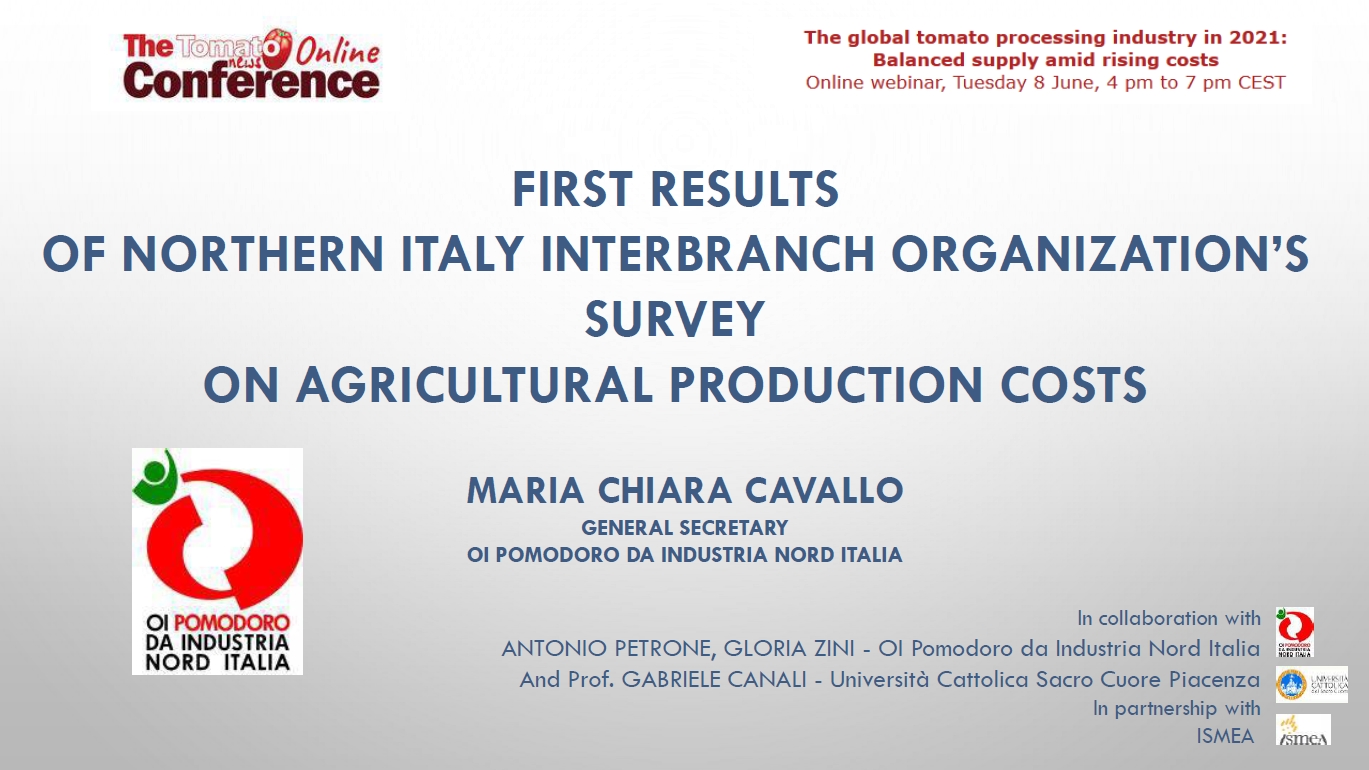 “I would like to share with you the first results of a survey of agricultural production costs, led by the Interbranch Organization staff – Antonio Petrone and Gloria Zini and with the supervision of Gabriele Canali, Professor of the University of Piacenza, who has been the scientific consultant of the Interbranch Organization since its creation. This survey was carried out in partnership with Ismea, a public institute of the Ministry of Agriculture and the operational branch in charge of deciding the price value of agricultural products for drawing up directives regarding unfair trading practices. So the Interbranch Organization aims to collaborate in researching and finding the correct real values for pricing processing tomatoes. 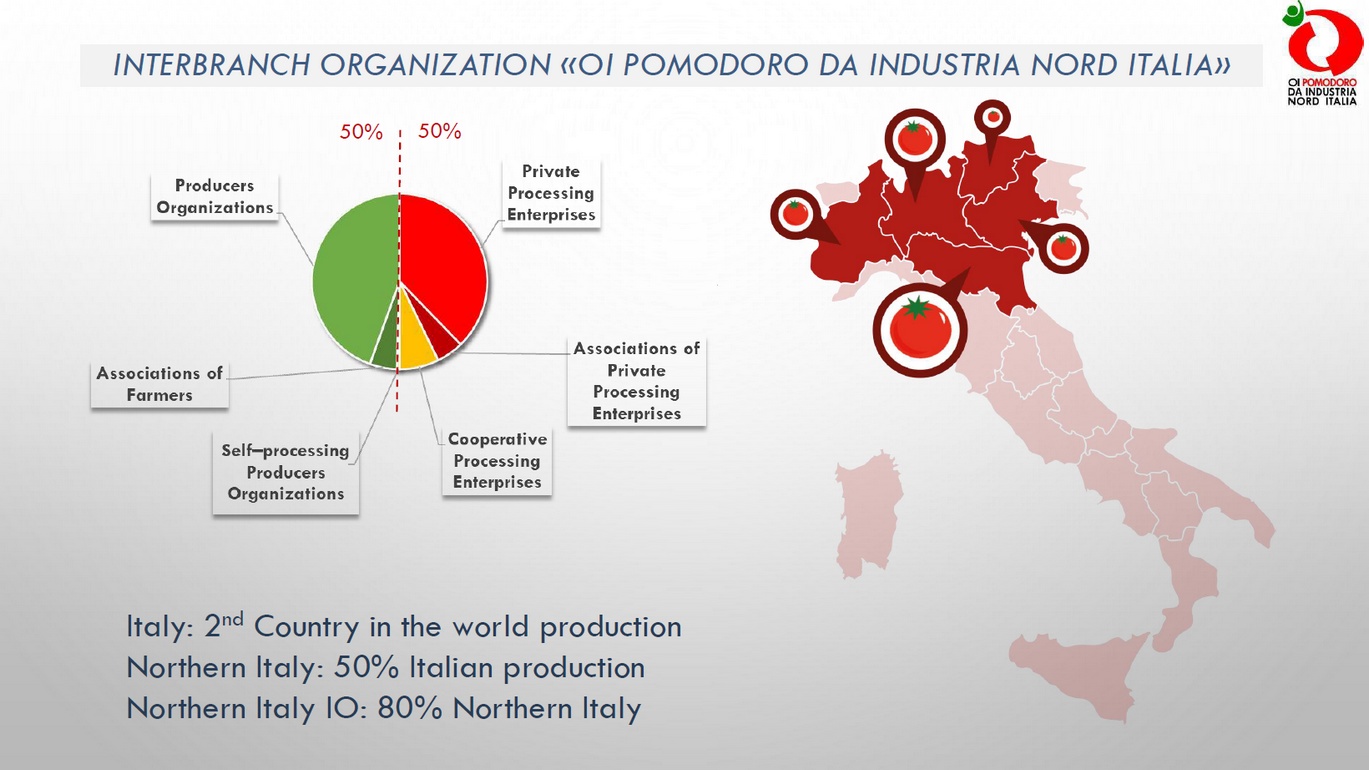 In order to introduce an analysis of tomato production costs, I should specify that the survey is related to processing tomato, not to fresh tomato, and is focused on agricultural production costs, not processing costs. The presentation is about the first results of the survey; we want to go further with this research: these slides are an early preview exclusively for the conference of today. 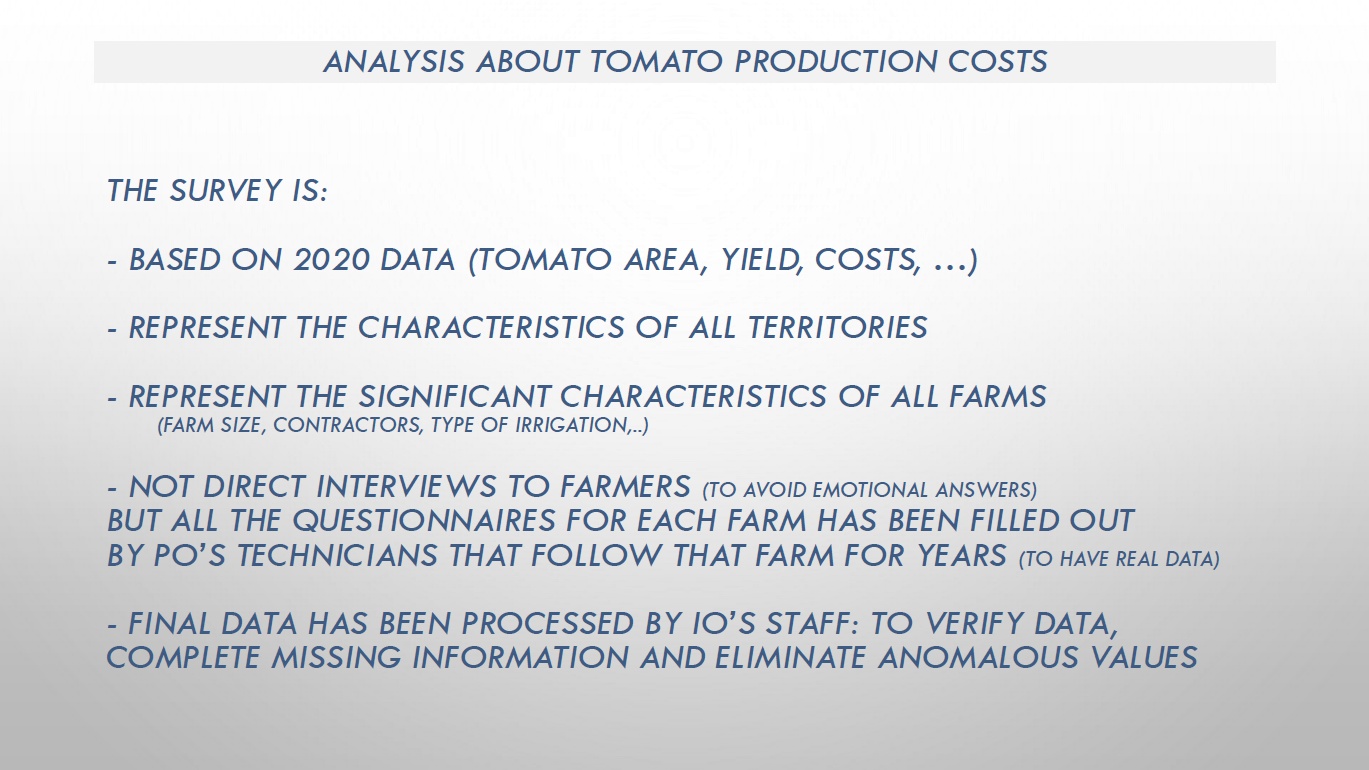 The survey is based on 2020 data (tomato surface area, yields, costs, etc.). It expresses the characteristics of all territories and the significant characteristics of all farms (farm size, use of contractors, computer systems, type of irrigation, etc.). The survey was carried out without directly interviewing farmers (to avoid emotional answers) but all the questionnaires for each farm were filled out by PO technicians who follow individual farms for years on a daily basis, providing real data.
And lastly, final data has been processed by the Interbranch Organization’s staff to verify data, complete missing information and eliminate anomalous values. 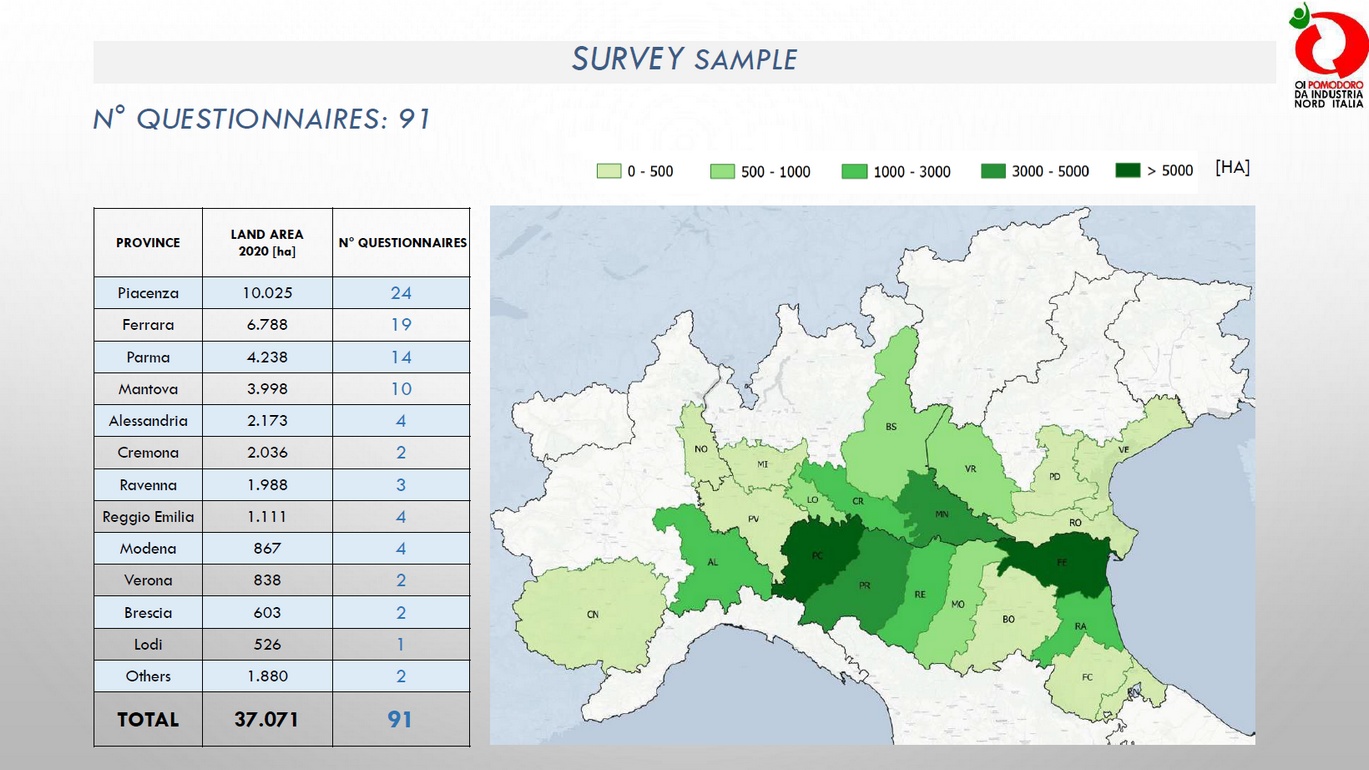 This slide presents a survey sample. We collected 91 questionnaires, distributed for relevance according to the tomato hectares in each territory. The slide shows areas with dark tones of green, which represent territories with more tomato surfaces. The table shows the number of questionnaires collected from each territory proportionally to the tomato hectares cultivated in each of them. 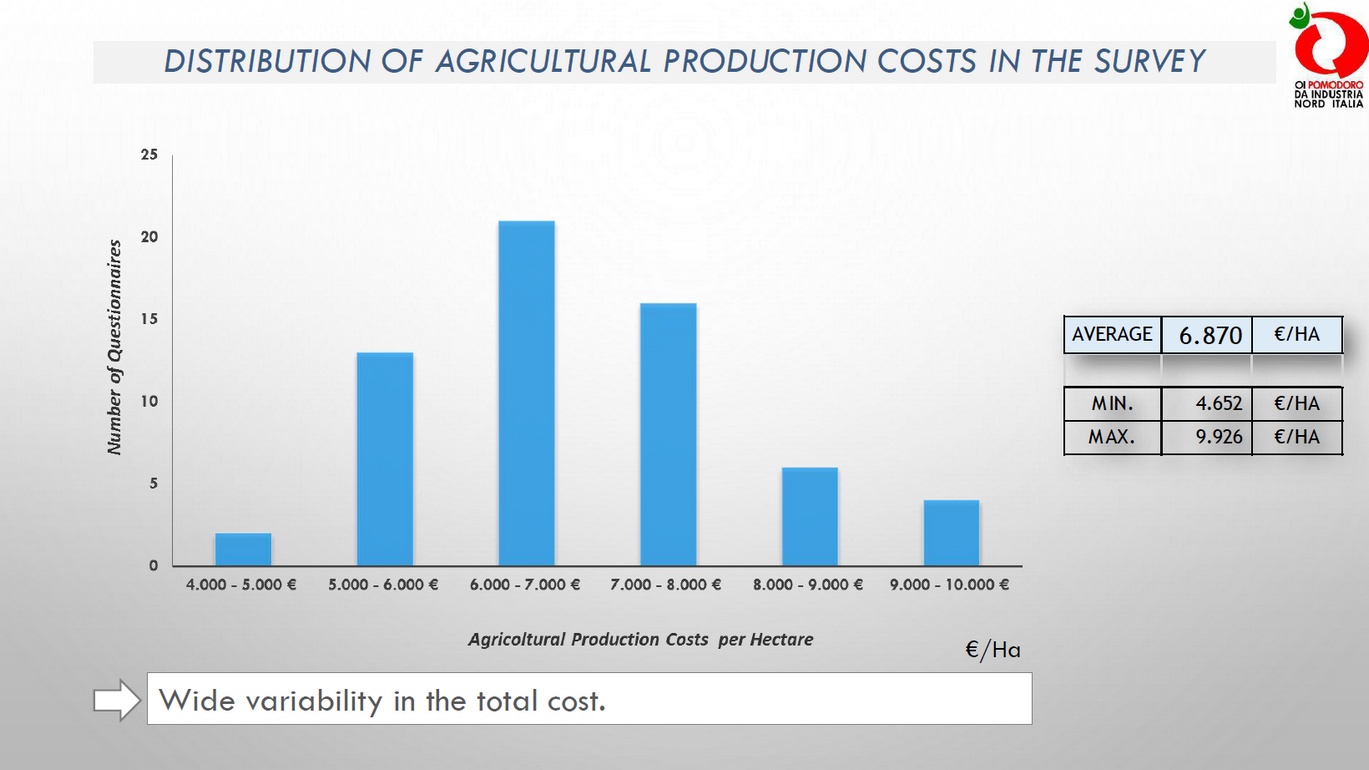 This graph shows the distribution of the questionnaires based on cost. We divided cost into clusters, within a range of 1,000 Euros per hectare, starting from 4,000 Euros/ha and going to 10,000 Euros/ha. The graph follows a normal distribution, and the cluster with the highest number of questionnaires is the 6,000 to 7,000 Euros/ha cluster. The average value is 6,870 Euros/ha, with a minimum of 4,652 Euros/ha and a maximum of 9,926 Euros/ha. This is an indication is the wide variability in total costs.

Total cost is composed of 82% variable costs and 18% fixed cost. It is important to remember that these are average values. For each type of cost, values are shown in the table. In the pie chart, that percentage is shown in yellow for fixed costs and in blue for variable costs.
[…]
This underlines that each farm is organized differently, and that total cost varies according to all these factors. 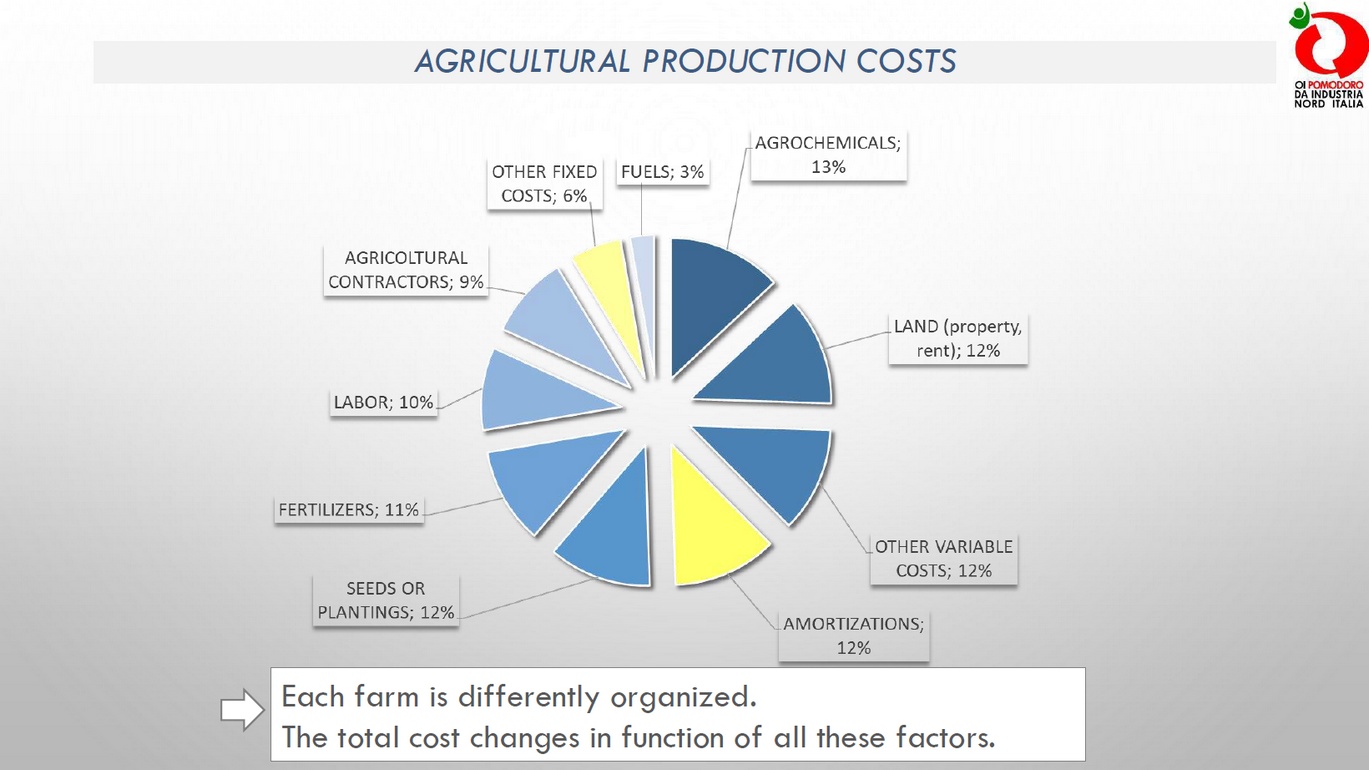 This graph indicates the value cost in Euro per hectare.  The black bars (vertical, Ed.) represent the standard deviation for each value. This indicates that there is a wide variability in each type of cost. 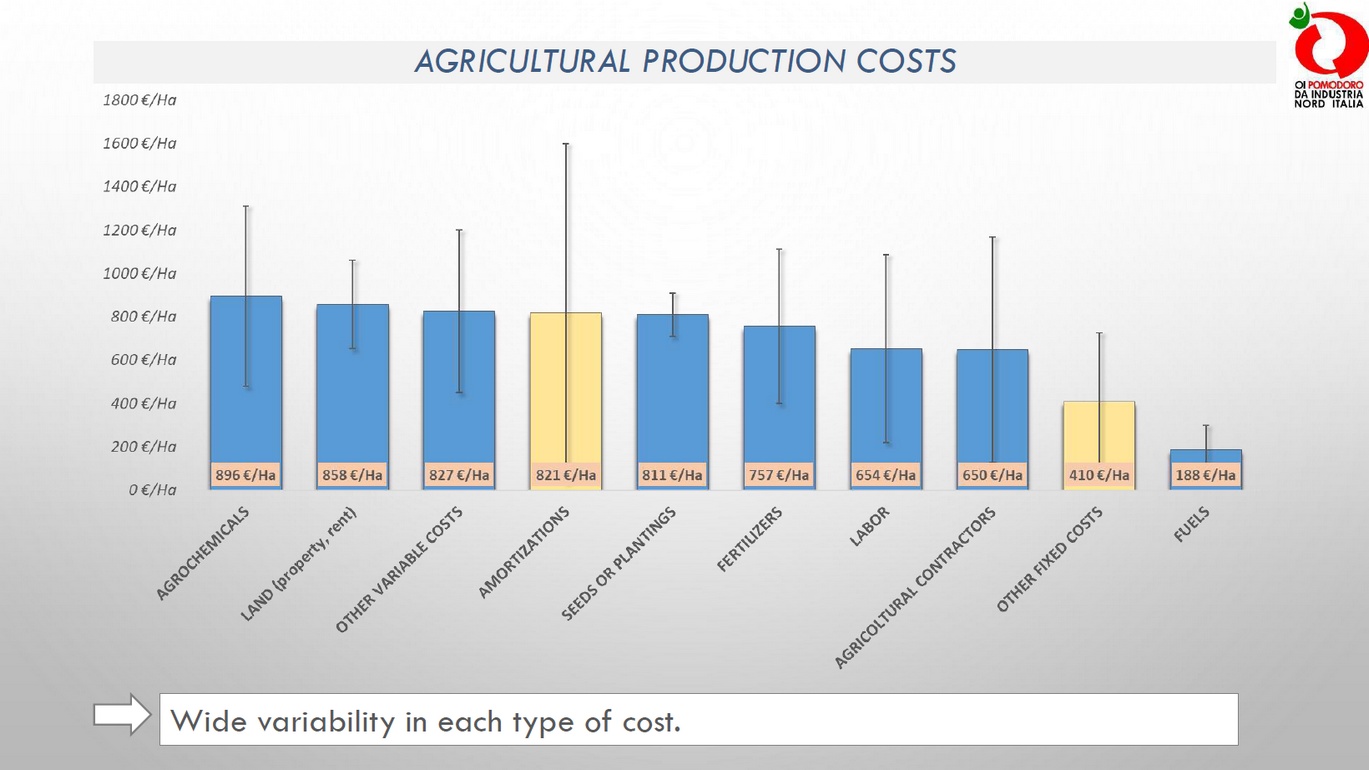 As for the relation between total cost per hectare and yield, based on the questionnaires regarding yield, it is clear that there is a normal distribution with a higher value between 70 and 90 metric tonnes per hectare. This confirms the validity of the survey, because Northern Italy’s historical average yield is 71.3 tonnes per hectare, and in 2020 it was 74.2 tonnes per hectare – slightly higher than average. The survey shows the same final results, which therefore correspond to reality. The relation between total cost and yield is directly proportional, as the black line indicates. The blue line shows that as the yield increases, total cost goes up. The challenge for farmers is to find the balance between cost and revenue. 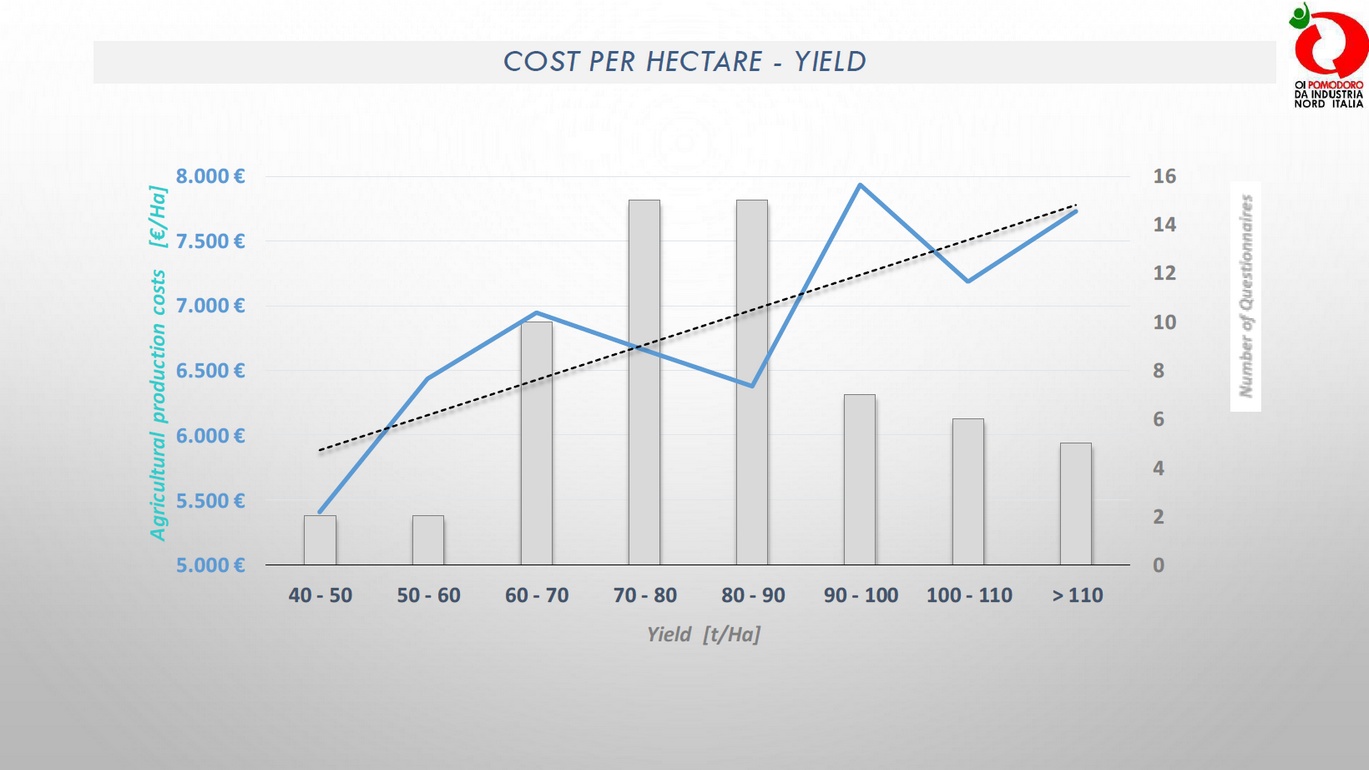 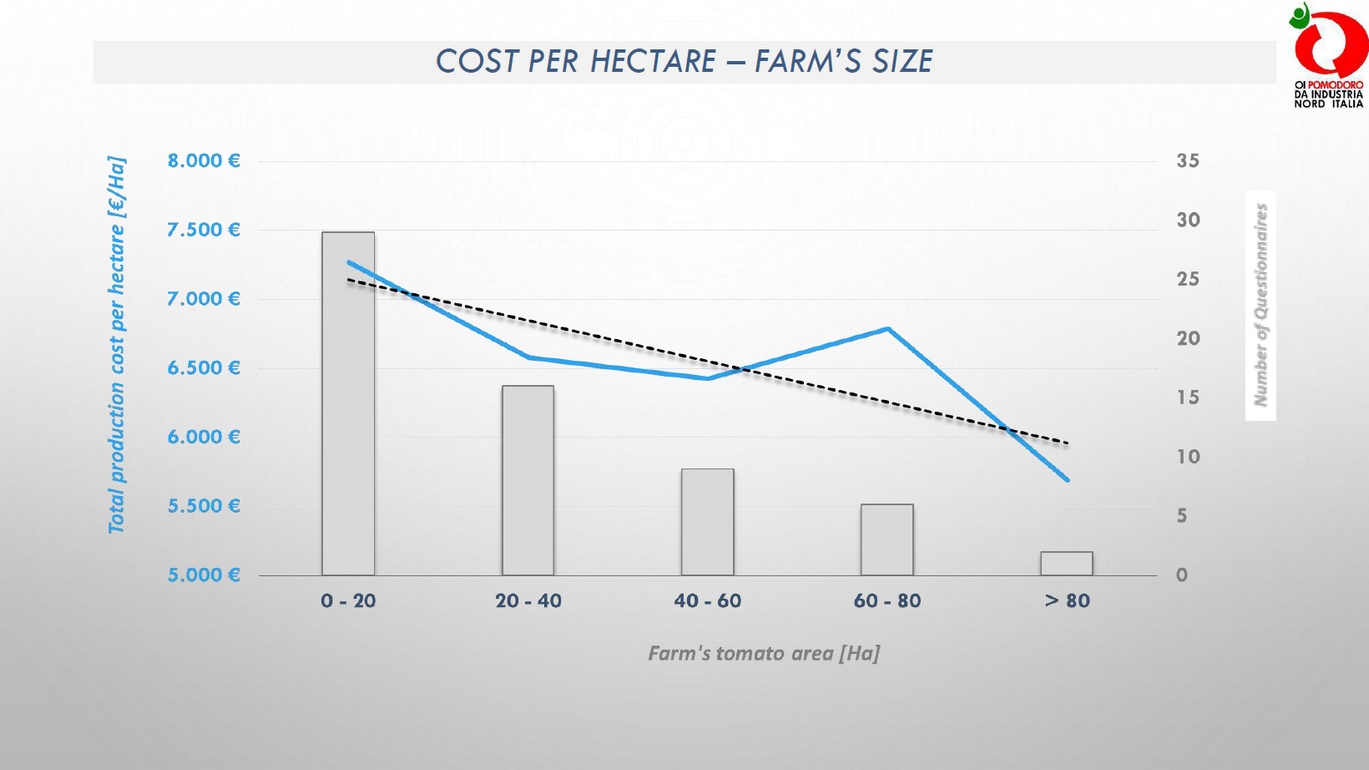 All presentations and videos will be made available here from 1st August 2021.