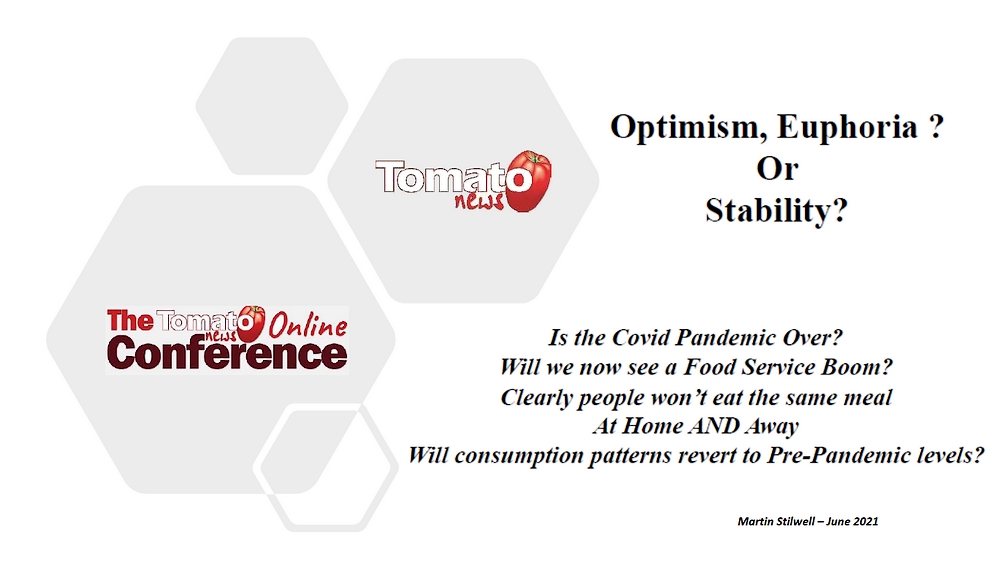 “After having heard others talk about optimism and euphoria, I wanted to talk about stability, or what we’ve seen happen in this extraordinary last year.
The questions I’ll be talking about are:

Is the CoVid pandemic over?
I believe the answer to that is “I think we are seeing the beginning of the end” but by no means the end.

Will we now see a food service boom?
We are starting to see signs of that in North America and in some areas of Europe. But whereas we benefited as an industry from what they call the “eating at home” phenomenon, which was basically being locked up and having to stay at home, as we moved forward, clearly people will not be able – or will not want – to eat at home and away. So some of the benefits that we’ve seen by people consuming our products because they are convenient at home will disappear. 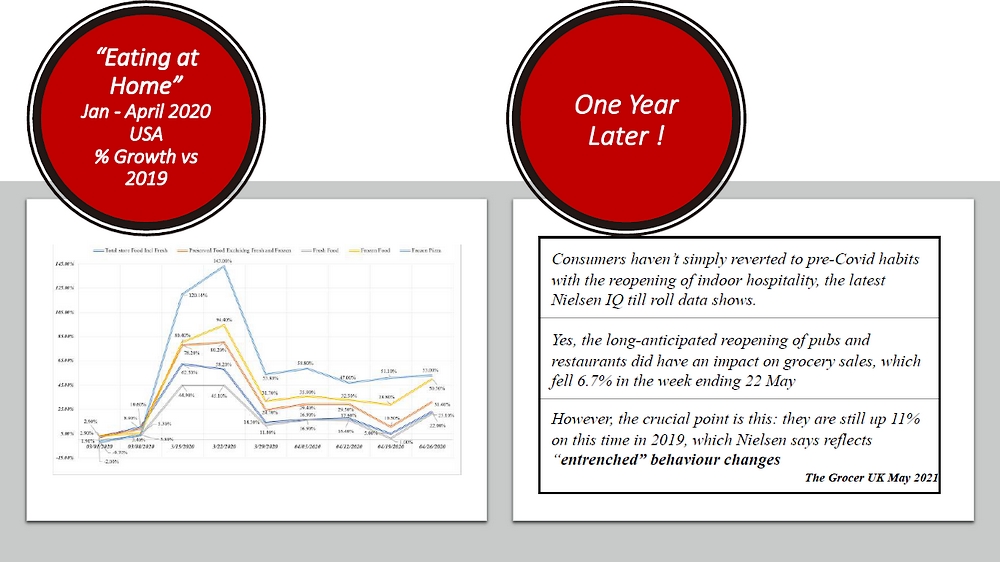 And the final question is:

Will we revert to pre-pandemic consumption levels?
If we think about this time last year – a little earlier maybe – we were looking at an explosion of consumption, as people went into lockdown all over the world. At the time, there was an extraordinary peak for frozen pizzas for instance, with a 140% growth in volume. But we are now one year on. Here are some quotes from “The Grocer”, a distribution magazine from the UK, where they state that consumers haven’t simply reverted to pre-CoVid habits. They emphasize that people are starting to go to pubs and to restaurants, but grocery sales, although they have fallen, are still 11% up from 2019. Nielsen, which most of you will know, says this reflects ‘entrenched’ behavioral changes. Time will tell! 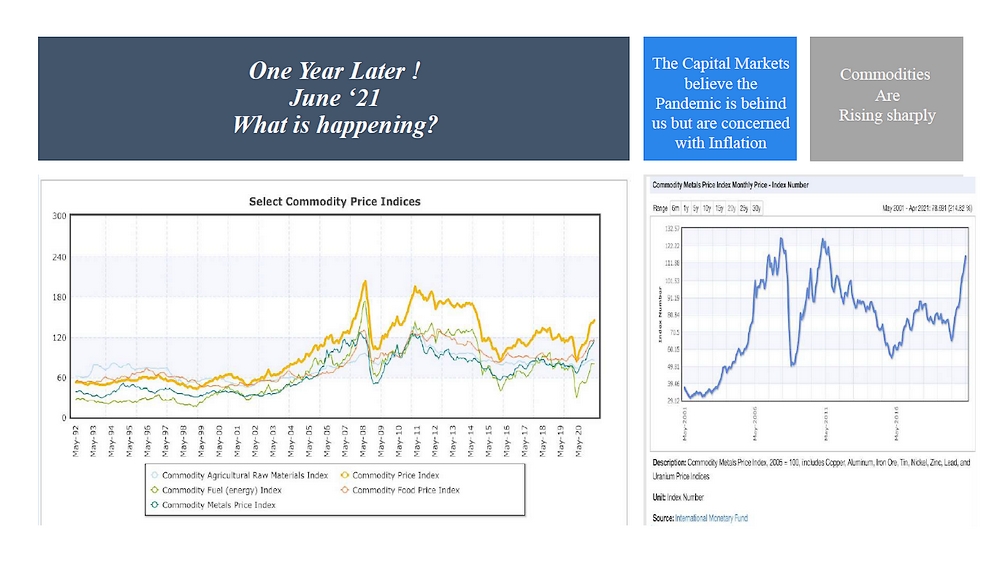 What else is happening? Clearly the capital markets and the commodity markets believe that the pandemic is behind us, or on the way to being behind us, and inflation is starting to be one of the issues which is much discussed. As a result, commodities are rising very sharply. The fundamental point I would make is that we should remember this pattern when we look a little further on at what is happening with tomatoes.
As for the price of steel – Mr. Manuel Vazquez mentioned this, those of us who buy drums to pack our products are all facing enormous increases in the prices of drums because of the increase in the price of steel. 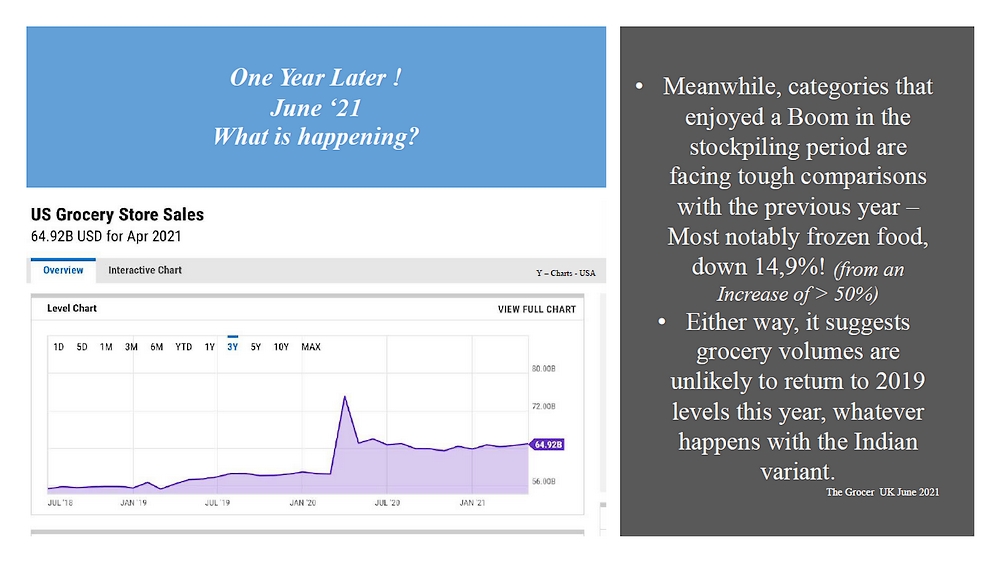 So, though commodities are increasing, we do see some fallback in consumption. You’ve heard me talk about frozen pizza. Well, interestingly, frozen food sales in the UK were down by nearly 15%, but this is largely because last year set such a high bar. And so we’re down 15% from an increase of over 50% or maybe over 40%, which is in any case a large increase!
Either way, it does suggest that grocery volumes are unlikely to return immediately to 2019 levels. I picked out a graph from the grocery sales in the US, which interestingly showed a peak last year, along with relative stability until April this year. This is data which we should all be watching closely because it will help us understand what is in front of us. We are extremely good at analyzing numbers looking backwards, but it’s much more difficult to try to forecast what’s going to happen in the future. 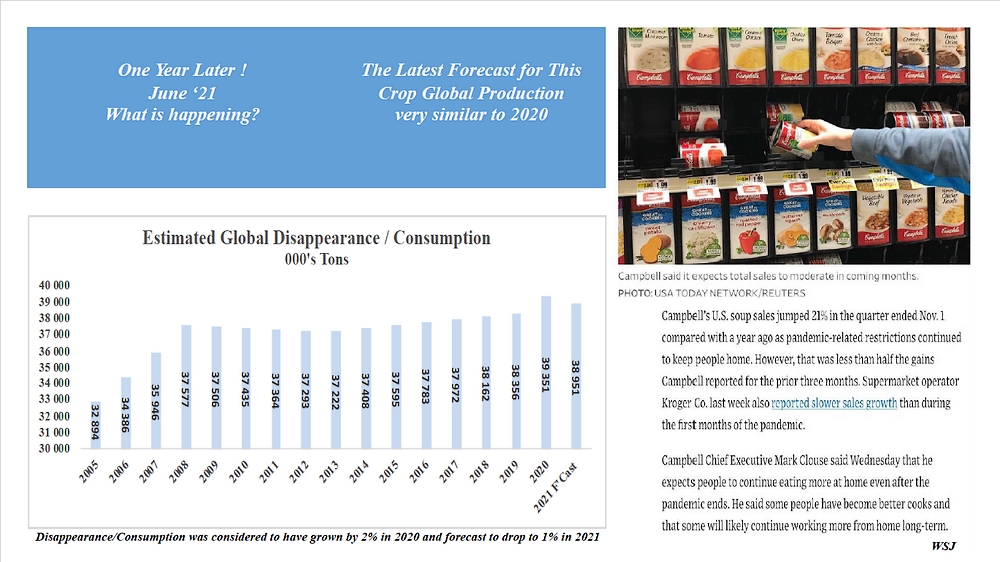 Now I’m going to try to do that, and I want to pass on here some comments from the Wall Street Journal on Campbell Soup. Campbell Soup was interesting because as you probably know, it struggled in recent years until the pandemic hit. Then sales took off and consumption increased very dramatically. I’m guessing what is being consumed globally in 2020, so I took a number (and I can be criticized for this) and assumed that consumption would increase by something like 800,000 tonnes. That represents a 2% increase in global consumption. And then, looking at next year, which is of course the key question, I have considered that consumption will in fact fall back. But I consider that it won’t fall back to the level it was at, but it will fall back to just halfway. It’s a compromise. It allows us to see what sort of balance we have in the marketplace.
Just to give you an idea in terms of global imports, if we look at the year running to the end of March, between 2019 and 2020, the market increased by 4.5%, or global imports did. This March, imports increased by 1.1% over the previous year. So, it might be a little slower, it’s just one month, but we should look carefully every month as it comes out, and François Branthôme publishes these numbers in Tomato News regularly every month. So it’s important we follow them because these are the only indicators we have in a situation which is frankly unprecedented. We’ve never lived through something like this before. 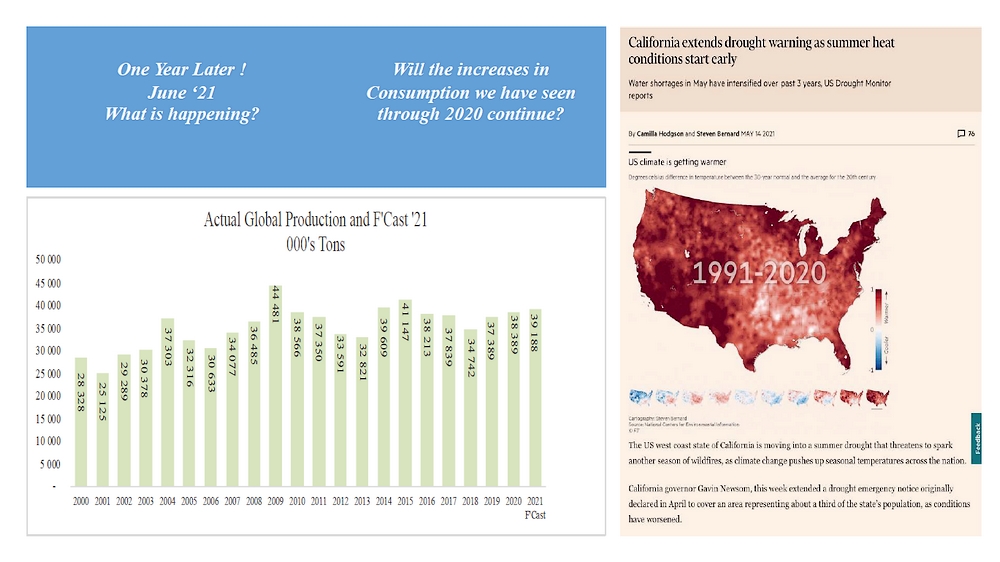 Now looking at production, this is much easier. We have a forecast. My own forecast in slightly larger than that of the WPTC for the 2021 crop – a difference of maybe 200 000 tonnes, not a very major difference. But the key issue that I think we are facing is that essentially what has limited the increase in volumes this year has been the inability of Californian processors to contract the volumes that they would have liked to contract. That has led to a drop in forecasts for the harvest of the 2021 crop between January and May. This is essentially due to the drought. The drought in California is severe. The weather is extremely hot, and farmers have hesitated about running the risk of growing tomatoes and some of them decided they didn’t want to.
And that is why, as Mark de La Mater explained to us, volumes this year are slightly down from January. When we look at the May forecast, it’s quite interesting to see that the forecast of the planted surfaces, which was down on January, is down also on the quantity actually harvested last year. Yet the forecast is slightly higher than last year, which suggests that the May forecast is probably optimistic. And I agree with Mark – in fact, I agree very strongly with Mark: the situation in North America is quite alarming… We may be looking at a situation which, in my opinion, may mean that in June-July 2022, there could physically not be any tomato paste available… 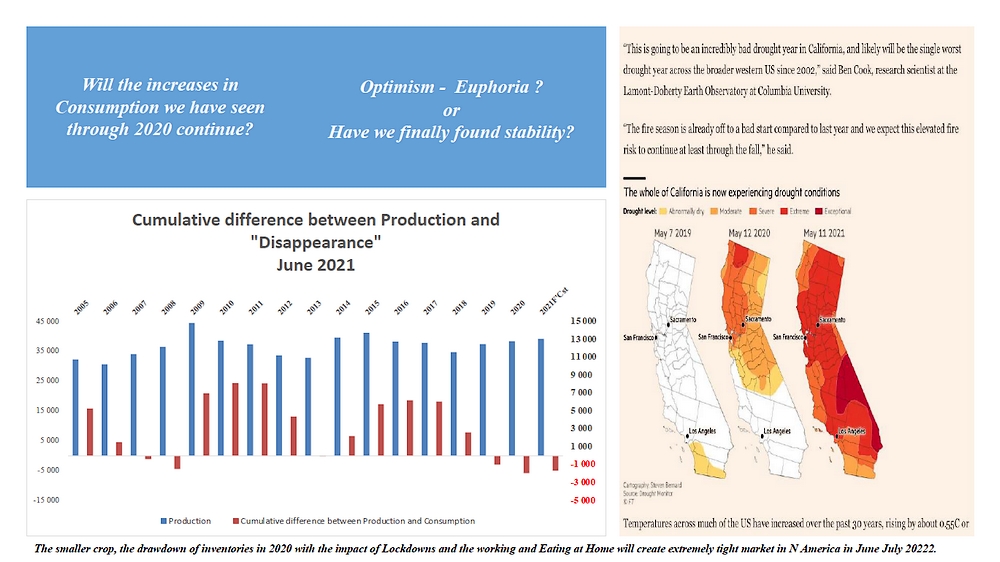 So what is the balance between consumption, production, and inventory? As many of you know from this graph, it’s a very simple mathematical sum. I added the difference between production and my estimate of consumption or disappearance, and it generates inventory which is either positive or negative. Negative doesn’t actually mean that you run out, although in California, that could well happen going into the 2022 crop. It basically means that inventory is pulled down further. What I am seeing at the moment is that the situation from a global perspective, if everyone produces what they are saying they will produce, will be slightly better than it is at the moment.
In other words, the market will remain tight, possibly even very tight, if California numbers drop further, or if there is a significant problem in any of the major growing countries.
So, have we found stability? I think that, as an industry, we are actually in quite a dangerous situation in that the tightness of the market could lead to products no longer being on the shelves. That frankly is a bad situation. It clearly will promote very high prices. It will promote speculation, but it will also promote euphoria from a price perspective and that is not good for us. So, if we meet in the Fall, in October-November, we should look at this very carefully in planning our season next year. Because although we want to keep the market in balance, we want to keep the market supplied. Our consumers must be able to buy our products”.
Source: TomatoNews Online Conference (June 8, 2021)
For further details about the Conference: http://www.tomatonews.com/en/the-tomato-news-2021-online-conference_10_115.html
(All presentations and videos will be made available from 1st August 2021) Presentation:
PDF of Martin Stilwell's presentation
Related events

Editorial: What troubled times we live in!