Italy: operators' update on the 2021 season

The 2021 production season for processing tomatoes is now properly underway in Italy, and the OI Pomodoro da Industria interbranch organization for northern Italy recently provided an update on this year's progress.
Surface areas planted with processing tomatoes in northern Italy amounted to 38,621 hectares as of 30 June, including 4,022 hectares of organic crops and 34,599 hectares of low environmental impact production plantations. The "organic" sector has confirmed its growing trend in response to market demand, as it has now reached 10.40% of total surfaces. 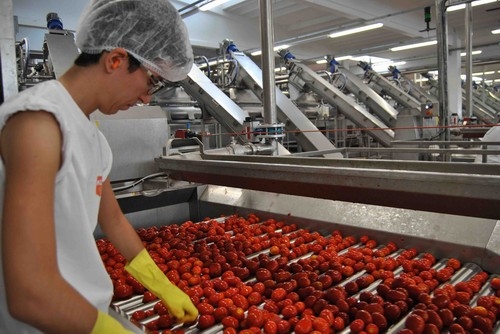 At the launch of the season, hailstorm damage and good Brix degree
The launch of the 2021 season was somewhat complicated from a climatic point of view.
As of 1 August (latest official data), 7.33% of the tomato volumes had been harvested, which is a figure slightly down on the quantities delivered at the same date during previous harvest seasons. The raw materials that have been delivered nonetheless recorded a Brix degree of 5.17, which is clearly higher than the usual average for the time of year, and they also present excellent color characteristics.

During its update meeting, the Pomodoro Nord IO provided the results of an inquiry into the planted surfaces that were hit by hail, following storms that occurred particularly on 26 July, in the western and central regions of northern Italy. According to these results, the affected areas have been estimated at 2,200 to 2,500 hectares, which is more than 6% of the fields planted with processing tomatoes. These areas suffered different degrees of damage to the crops, but overall loss of production has been estimated to date at between 80,000 and 100,000 tonnes.

The meeting also provided the opportunity for electing the new coordinating committee, which is made up of equal representation between the agricultural and industrial branches. Bruna Saviotti, who represents processing companies and Paolo Gazza, representing the POs, were elected vice presidents of the interbranch organization.

Southern Italy: a number of critical issues at stake
Agricultural and industrial partners provided an update on the situation in Campania at the end of August. After an exceptional harvest in 2020, the 2021 processing tomato season in Campania has encountered a number of difficulties: growers have faced climatic hazards, with delays to the start of harvest operations and subsequent consequential overlapping production issues, while processors have needed to adapt to quantities that have been above the processing capacity of factories.

In a recent analysis of the damage suffered by processing tomatoes in Campania, Giovanni De Angelis, the Anicav General Director, explained that "the harvest in the province of Caserta (an early production region) started with the delay of 7 to 10 days due to unfavorable weather conditions in springtime. As a result, the launch of processing operations also had to be delayed. At the same time, high temperatures recorded after mid-June caused early ripening of the crop in other regions (Apulia and Lazio), resulting in increased need for means of transport between the fields and the factories.
"It is true that the industry had asked for a 10% increase in the planted surfaces in the south-central region, compared to 2020, in order to help replenish stocks that were depleted during the confinement. The increase in services has actually exceeded 14%," explained De Angelis, "and at times has exceeded 20%, like in the province of Caserta. It should be added that the yields per hectare are considerably above historical averages this year, having increased from 80-90 tonnes per hectare to over 120 tonnes per hectare. All of these factors have caused difficulty for the industry."
In the end, "the harvest season that we are facing in the south-central basin," continued the director of the Anicav, "has been characterized by a series of critical issues. These include a crisis in raw materials and an increase in recorded costs, difficulties recruiting labor, a shortage of transport drivers to take loads to the factories and, most importantly, grouped ripening of the fruit leading to a de facto excess of the offer. All of this makes our work even more complex and difficult." 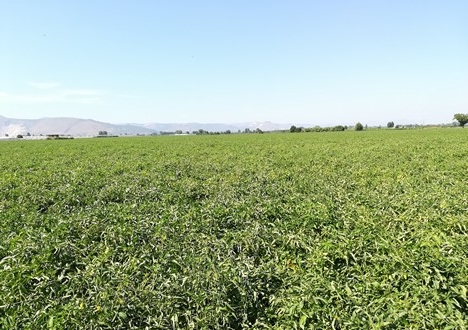 In order to find realistic solutions, Italy's national fruit and vegetable union, the Unione Nazionale Italia Ortofrutta, and the Campania regional authorities have brought together a crisis committee, and addressed a letter to the minister Stefano Patuanelli to inform him of the urgency of this grave situation affecting the central and southern regions of the country. In this letter, mention is made of the risk of "lost revenue that could also lead to problems of public order" and a request has been formulated for a specific government intervention based on the payment of compensation for lack of harvest of the tomatoes under contract, similar to what was done during the previous production season by the Ministry at the request of the Emilia Romagna region, framed by ministerial circular 9060200 of 20 August 2020. This crisis, according to the terms of the letter from the chairman of Italia Ortofrutta, "affects more than 3,000 hectares, including 1,000 in Campania alone," and would justify calling on "extraordinary economic resources, outside of the usual operational programs of producers organizations."

In this difficult context, Luciano Simonetti (PO Apopa di Caivano (Naples)) has recommended creating insurance schemes in order to face this kind of extreme crises. In his opinion, "due to these unforeseen circumstances, there will be hundreds and thousands of hectares that will not be harvested, because the tomatoes are no longer suitable for processing as a result of plant health issues and bad quality products. As a result, at the end of the season, there will be a shortfall in production, and we will realize that we have not harvested as much as we intended." 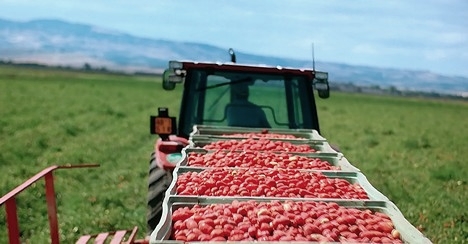 The latest WPTC observations show that in the north of Italy, as of last 8 August, 589,000 tonnes (19.2% of the volumes under contract) had been processed, with an average Brix degree of 5.07 and a rejection rate of 4%. Local sources estimated at approximately 400,000 tonnes the volumes due to be harvested the following week, taking the total processing quantity at mid August to about 1 million tonnes, which is one third of the total volume expected. Harvest forecasts have been maintained at 2.8 million tonnes, with the losses caused by hail-storms due to be compensated by an increase in planted surfaces. Local operators estimated that processing operations were likely to continue at full capacity for a further three weeks. 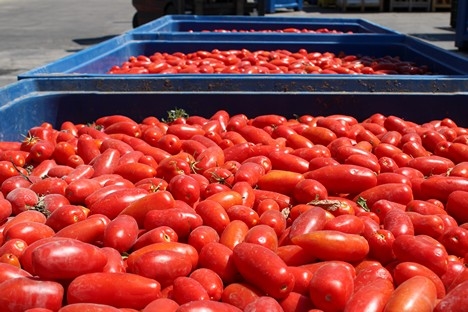 At the same date (18 August), all the factories of southern Italy were operating at full capacity and expected to be able to absorb the overlap between early and late harvests. Although the harvest started 5 to 7 days late, the delay compared to 2020 is expected to be caught up by the end of August. Fruit quality is good, but industrial yields have been affected by unduly soft fruit. Despite alarmist messages from agricultural organizations relayed in the local Italian press, total expected volumes in southern Italy remain at 2.7 million tonnes despite some problems of availability of both labor and transport means. Finally, the recent heat-wave in Apulia could reduce yields in September.