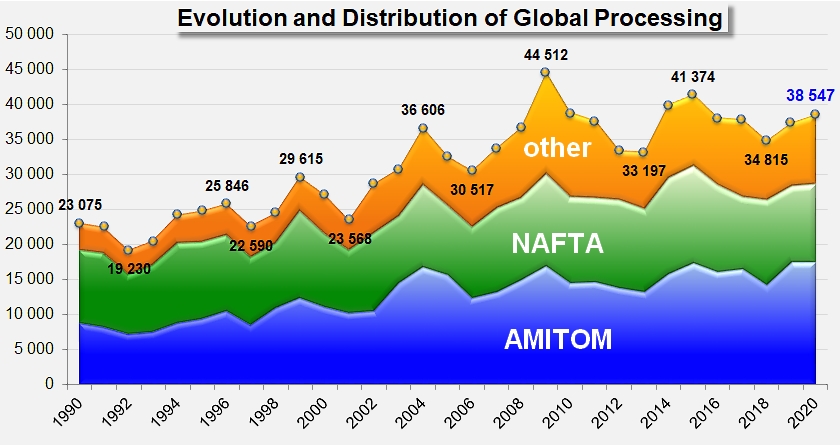 In Egypt, the summer crop is now finishing. The winter crop started a week ago but will pick up in 10-15 days to supply the few factories which will remain open. Quality and brix are good and colour especially good. There is no change in the total forecast.

In France, the harvest will finish at the end of the week in the south west. The season was disappointing with an accumulation of rain which led to the loss of 265 hectares out of the 2220 hectares planted (12%) and at least 13% of the volume as the total volume will be around 135,000 tonnes when the volume contracted was 156,000 tonnes.

In Greece, the final volume is 430,000 tonnes. Overall it was a very good season, the best for many years, apart for the last few days when rain affected the end of the harvest. Farmers are keen to plant for next year so surfaces should increase by at least 10%.

In Hungary, processing was completed on 10 October. The last days were already made hard by rains. The final total amount of processed raw tomato is 82,000 tonnes, much lower than the early target. 2020 will remain memorable for poor yields, meanwhile average brix was 4,85. Under these circumstances the profitability of farmers was critical and requires definite actions for 2021.

In the South of Italy, the final production was lower than expected at 2.42 million tonnes. The reduction was mainly due to lower farm yields in North Puglia, in part because of the lower water availability from the Occhito dam. In other areas, the farm yields were good. Factory yields were poor for diced and wholepeel so production is reduced, quality, thanks a good selection, was anyway good for those and also paste or passata. The production of 3kg cans for HORECA was higher than expected at the start of the season which is surprising as there were already stocks of these products.
In the North of Italy, the final production was 2.74 million tonnes which is 95% of the contracted volume. The average brix was 4.82 and the penalty rate of 5.07%. The farm yield of the late crop was good. The processing yield for diced and crushed was low.
The total for Italy is therefore 5.16 million tonnes.

In Portugal, the initial forecast was 1.4 million tonnes, and it was reduced to 1.3 million tonnes in July. Early yields were very low, but they improved in September to reach an average yield of 89.55 t/ha for the season. As a result, brix was quite high and quality was very good. It was a tough season and very difficult for processors to plan as factories could hardly ever run at full capacity. The official final production figures are 1.262 million tonnes from 14,160 hectares. 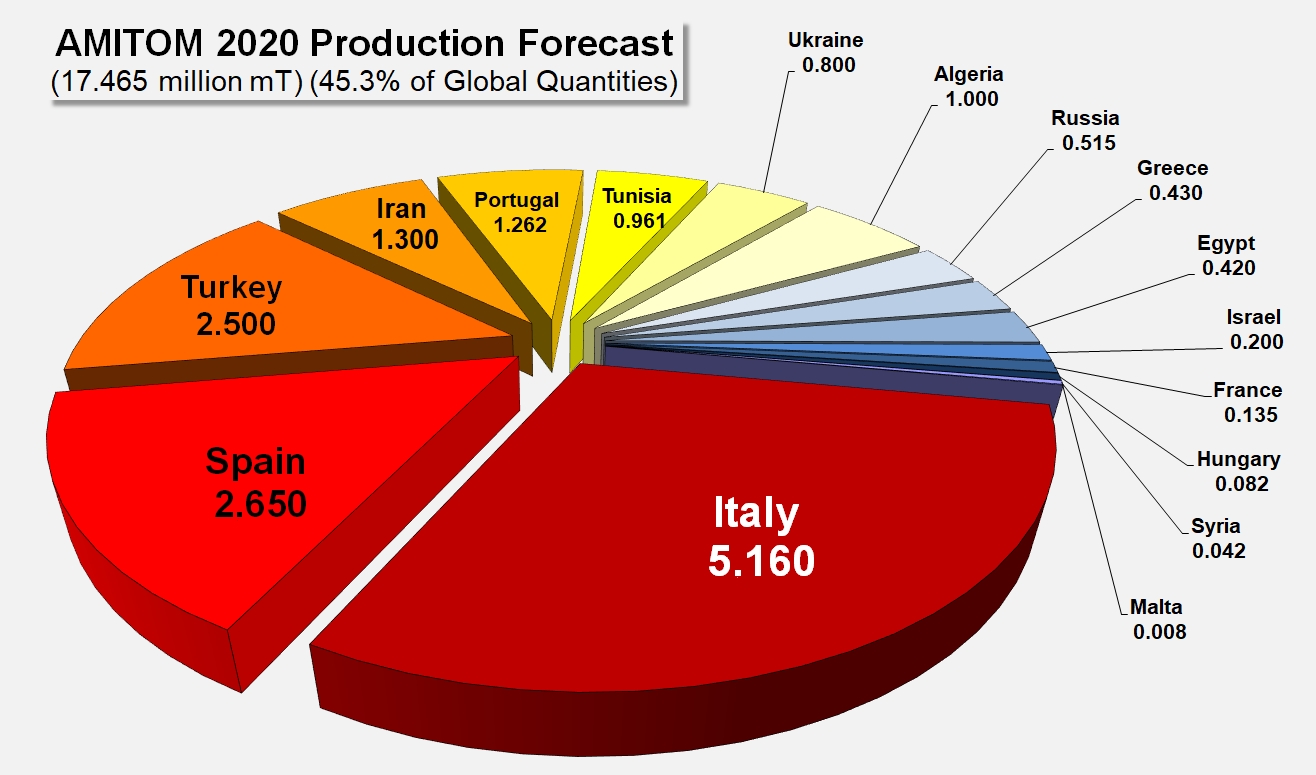 In Russia, the provisional final figure is 515,000 tonnes. It was rather difficult season with unstable weather, two weeks delay in planting, loss of some planted areas (hail), corona-affects – health worry, restrictions, lack of seasonal staff, and unremitting toil for the best results-. In January the estimate was 610,000 tonnes but the new plant project was frozen so in April the estimate was reviewed down to 550,000 tonnes. Moreover, 500 hectares out of the 6.800 ha total surface planted were lost in September, hence the reduction in the final volume. The average yield was 83 t/ha and the average brix 4.6.

In Spain, the last factories are closing this week. The final production is estimated at 2.65 million tonnes. It has been a complicated season throughout. Farm yields were very low (-20% on normal) and and the companies’ programs could not be completed and incurred how production costs as factories never really ran at full capacity. Fruit quality was however generally good.

In Turkey, in the absence of any official date, the industry estimate is that 2.5 million tonnes were processed, a better crop than expected. The weather was good until the end of September which meant that the harvest lasted longer than usual.  Quality was average.

In Ukraine, the harvest should finish at the end of the week with a total volume of around 800,000 tonnes. The season was challenging. Cold weather in June and July delayed the start of the season to the middle of August and the harvest was totally interrupted for five days due to rain.

In California, the last factory should be closing this week and the total volume should be close to 11.3 million short tons (10,255 million metric tonnes), while the early estimate was 12 million short tons (10,886 million metric tonnes). The season was marred with a succession of heat, diseases, smoke from the fires... and all the challenges linked to covid-19. Altogether, yield is about at the average of the last seven years.
In the north production is closer to contracts than in the south. Planting was done on time as they did not have the rains which they had last year and most of the crop was harvested by the end of September. In the South, yields were poor at the start of the season then picked up and were good until the last few weeks before dropping again at the end due to the heat.
Most of the processors closed on 10-12 October. The smoke cover due to the forest fires reduced the temperatures by up to 10°F compared to the forecast and meant that lights at to be on at noon some days for a few weeks.

In China, the total amount of tomatoes processed in China is estimated at 5.8 million tonnes for a total output of tomato paste of 880,000 tonnes. A total of 80 factories were opened during the production season, 12 of which were operated by Cofco Tunhe.
During the 2020 production season, the weather was good and production normal in Xinjiang and 3.47 million tonnes were processed in northern Xinjiang and 1.25 million tonnes in southern Xinjiang,
In Inner Mongolia the season was more difficult with lower average temperatures than usual, especially in early May, leading to late ripening, and above average rains in August and September. 16 factories operated in 2020 and they finished production in mid/late September. Average brix of fresh tomato was lower than normal years but lycopene level higher. Totally around 940,000 tonnes tomatoes were processed in the province, equal to around 140,000 tonnes paste. Demand is strong and products sell quickly.
A further  60,000 tonnes were processed in Gansu.

In Japan, due to long rain, the lack of sunlight in July, and the heat wave in August, production is reduced to 23,000 tonnes.

The current estimate for the US Midwest is 470,000 short tons, with an additional 40,000 short tons in Pennsylvania (a smaller crop than normal). This would bring the total for the US outside California at 510,000 short tons (463,00 metric tonnes). USDA official figures will be released in a few weeks. 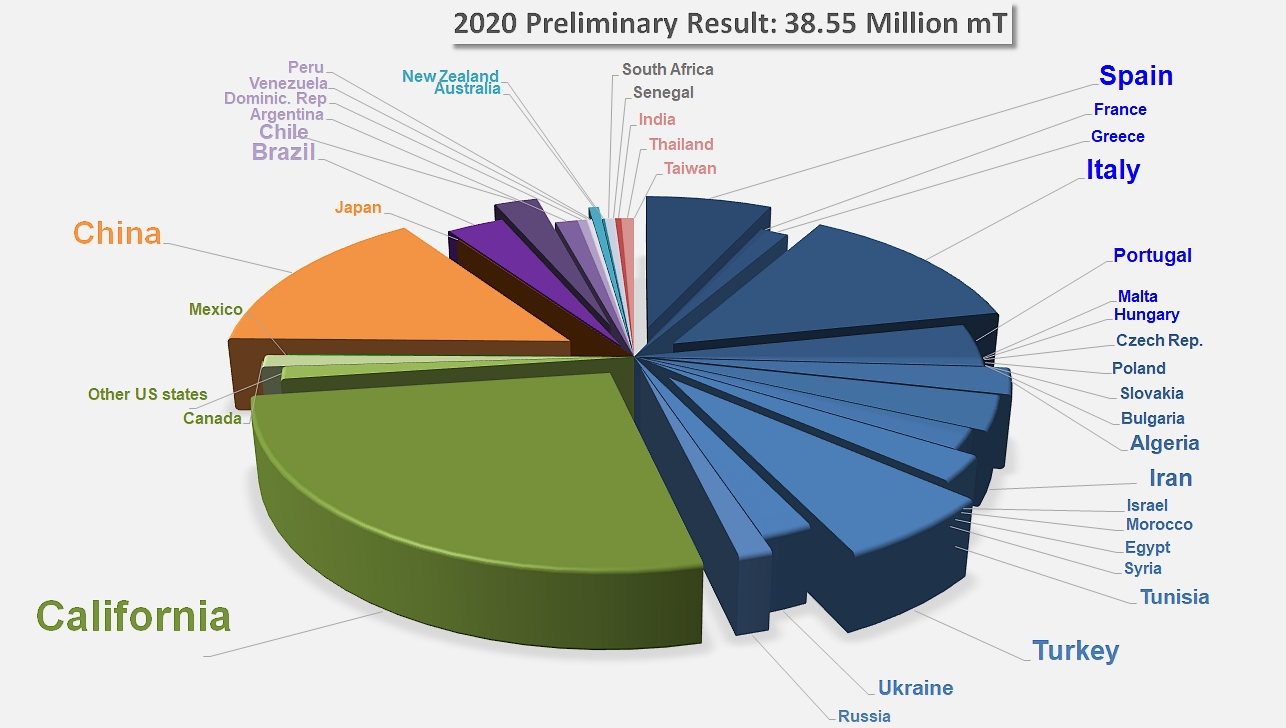 Southern hemisphere countries
In Argentina, the season which ended in May 2020 was good, except for some issues with hail and strong winds during transplanting. Surfaces are increasing and notably in Cuyo were yields are higher than in the other regions. A total of 454,000 tonnes were processed. For the 2021 season, growers are currently planting and the surface should increase by 15% to 7,150 ha and 540 000 tonnes are expected to be processed. Currently, there is a long Niña effect which normally means reduced rains but could cause some storms. The long-range forecast is currently for a dry season.

In Australia, the planting season has been pretty good with some rain which did not affect operations. La Niña is expected to bring a wet winter. So far, expectations are for a total crop of 241,000 tonnes

In Chile, after a big drought which reduced the 2020 crop to 907,000 tonnes, during the last winter there was more snowpack, and thus more water for irrigation is available for the coming season. Growers are more optimistic and the surfaces planted should be around 12,000 hectares, similar to the 2019 season. Transplanting operations are going well so far and should continue until the end of November. As in Argentina, a very dry summer is expected. The forecast is 1,13 to 1,15 million tonnes

The world production estimate is attached. This estimate will be adjusted as final production figures are collected, especially for countries for which no recent data is currently available.

Some complementary data:
In 2020, the Top 10 processing countries consisted of California, China, Italy, Spain, Turkey, Iran, Portugal, Brazil, Algeria (first time) and Tunisia. Chile's underperformance places this country 11th in the world this year, ahead of Ukraine. These ten countries processed more than 83% of the quantities processed worldwide. 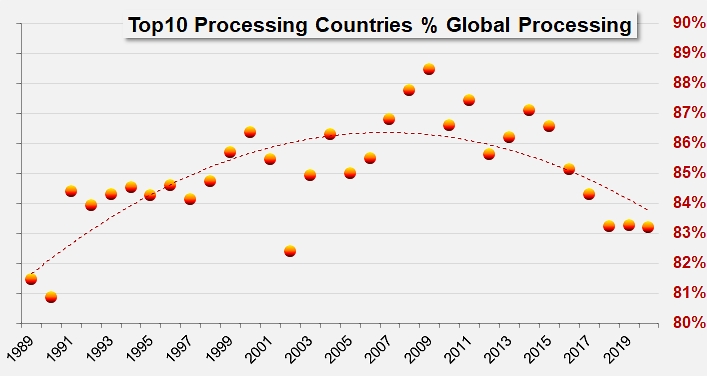