29/01/2020 - Sophie Colvine - 2020 Season
The full WPTC 2020 world production estimate will only be released in a few weeks when information from all countries has been collected. The total currently stands at 39.29 million tonnes with 2019 production used as an estimation for countries where no 2020 estimate is available. This would represent a 5.1% increase on 2019 final production of 37.38 million tonnes.
Southern Hemisphere countries
In Argentina, 35% of the area had been harvested by 22 January with good yields. Weather conditions have been fair with high temperatures and no rain for good mechanical harvesting. The forecast is kept at 460,000 tonnes.

In Australia, the harvest is set to deliver 220,000 tonnes processing tomatoes this season. After a cool November, which has delayed maturity by 10 days, January has been kind with warm fine weather, resulting in crops strengthening and should deliver budget yields or better.

In Chile, the harvest started earlier than usual in mid-January. The forecast remains 855,000 tonnes.

In Egypt, the total forecast for 2020 is expected to be above 400,000 tonnes, at around 420,000 tonnes. Winter crop harvesting was delayed to the middle of January due to a cold spell at the beginning of January.

In France, it is too early to have a precise estimate but the volume contracted should be in the order of 160,000 to 170,000 tonnes with an increase in the organic volume.

In Greece, production this year is expected to increase by 40,000 tonnes to 440,000 tonnes. Growers are pleased with the good yields obtained in 2019 and willing to plant more.

In Portugal, it is too early to have a good estimate but the crop could be similar to 2019 at 1.4 million tonnes.

In Spain, it is also too early especially as there is a serious concern regarding availability of water in Andalusia which could lead to a reduction in the surfaces planted. Yields in 2019 were also exceptional so a reduction in total volume is likely with a rough estimate of 3 million tonnes for the time being.

In Tunisia the volume processed should increase to about 1 million tonnes, and a similar volume should be processed in Algeria.

In Turkey, the current forecast is about 2.2 million tonnes. Farmers are keen to plant but processors do not want to increase production as stocks are depleting slower than preferred.

The current forecast for the AMITOM countries stands at 18.08 million tonnes with 2019 production used as an estimate for countries where no 2020 estimate is available. This would represent a 4% increase on 2019 final production of 17.45 million tonnes. 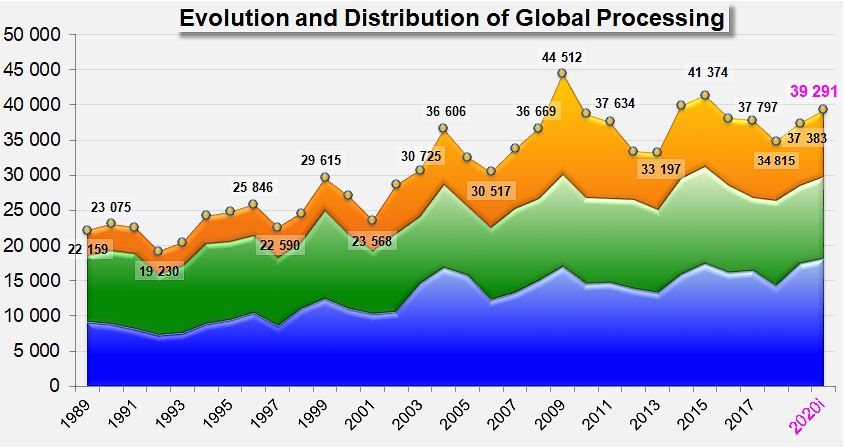 In California, tomato processors reported to USDA-NASS that they have, or will have, contracts for 12.0 million short tons (10.89 million metric tonnes) in 2020, which is an increase of 4.3% compared to what was reported under contract in the August 2019 California Processing Tomato Report but 7% above 2019 final production of 10.14 million metric tonnes. The contracted production for 2020 should come from 235,000 acres (95,100 hectares), generating an average yield of 51.1 shorts tons per acre (114.5 t/ha).

In China, demand in 2020 is expected to increase by about 100,000 acres and about 0.7 million metric tons of raw materials, which would lead to a total volume of circa 5.3 million tonnes. Actual planting will take some time.