AMITOM members in the EU
In France, there is no real change since the last meeting. The volume processed at the end of last week (week 38, ending September 21) was 120.000 metric tonnes (mT), with good quality and an average Brix of 4.8-4.9. The forecast is good for the next ten days and the 30.000 mT remaining in the fields should be processed to reach the 150.000 mT forecast by 10 October.

In Greece, most factories have now stopped processing and the last ones should close in about a week. Some recent rains have caused some stoppages for a day or two, but quality and Brix remain good. It is estimated that 375,000 mT, 93% of the total forecast of 400,000 mT has been processed to date.

In Hungary, we are at the end of the season but rain stopped production. 5-5.5 % of the raw tomato are still in the fields. Refraction average is around 5. Total volume is a bit higher than expected at around 100.000 mT.

In the South of Italy, record quantities were delivered during the week of 8 to 15 September and as of 15 September, 1.97 million mT had been processed. After bad yield and quality in July and August (a lot of greens), all the month of September was very good with very little rain, and yield and quality were good, although processing yields remain low. The harvest should continue into the first week in October and should exceed the 2.3 million mT forecast.
In the North of Italy, on the contrary two weeks of rains in September have greatly disrupted the harvest which is now reaching the end and will close with a total volume lower than 2.4 million mT. Quality is not bad, with an average Brix of 4.79.
With the increase in the south and decrease in the north, the expected final volume in Italy remains 4.7 million mT.

In Portugal, the crop has been developing quite well. Quality still very good even although there is only one or two weeks left to harvest. Last weekend, we had rain, which was significant in some areas but only lasted one day. Therefore, harvesting did slow down but didn’t stop. Yields have been good even if area planted had been reduced this year. The weather is still good but with cold nights and during the day temperatures of 23-26° C. This week some factories will start to close. The estimated volume remains the same.

In Spain, factories are starting to close in Extremadura with the last one or two expected to finish next week. Some rains last weekend have interrupted harvest for a day. In the north, the rains were light and did not affect processing which should continue until at least mid-October and probably until 20-22 October. Total production will probably be slightly higher than 3.1 million mT.

Other AMITOM members
In Egypt, the last loop of summer season is delayed by around one week, and consequently harvesting is slow. Nothing new from the last situation, all processors are waiting and are expected to start processing within a week maximum.

In Tunisia, the tomato processing season is almost completed. The quantities processed until 23 September reached 782,000 mT of which 767,000 mT for the production of tomato paste and 15,000 mT for the production of canned tomatoes. Final volume is estimated at 790,000 mT. The last three factories in activity source late-season tomatoes from the Kef, Kasserine and Bizerte regions.

In Turkey, the crop volume is slightly higher than the forecast and coming to a close.

In Ukraine, the weather is good. Nights are getting colder (down to +6°C) and days are warm. All tomatoes are ready for harvest. Average country Brix stays low at c. 4.5 and most likely it will stay the same till the end of the crop. By now about 80% of 730,000 mT have been processed and the season should last until 10 October.


Other WPTC members
In California, the estimate is to process 916,425 short tons (831,367 metric tonnes) for this week. At the end of this week (28 September) the industry will have processed 10,034,723 short tons (9,102,692 metric tonnes). Harvest will continue to slow down next week as some processors will be close to finishing. Tonnage continues to come in overall below contract, and the estimate remains unchanged from last report at 11.0 million tons (9.98 million metric tonnes).

In Ontario, the tomato harvest is progressing well with approximately 65% of total contract volume delivered to date. Overall crop quality is reported as very good with budget yields anticipated. Processors are expecting to achieve contract tonnage or slightly above, finishing the pack in early October.

In China, the production season has come to an end and most factories have closed. Current output is about the same as expected (4.3 million mT). More detailed information will be available after the complete end of the season.

Other countries
The USA Midwest has had a very nice weather pattern for harvest. It has been warm and dry with essentially no interruptions or problems. Harvest should finish at least by 15 October. 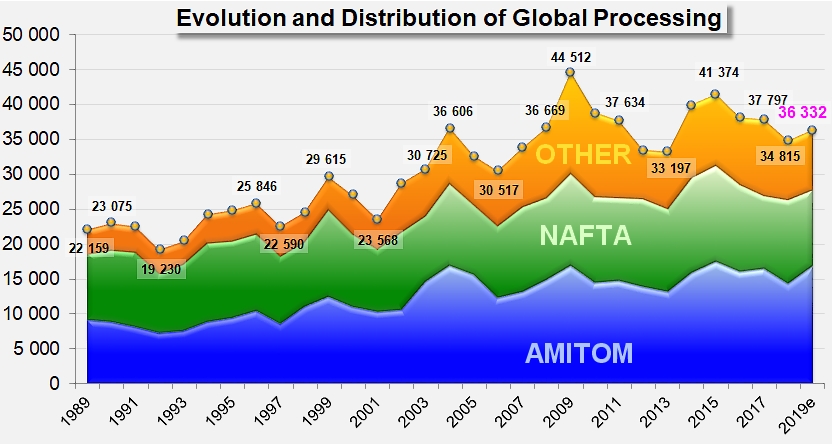 Comments on the North Italian crop as of 25 September