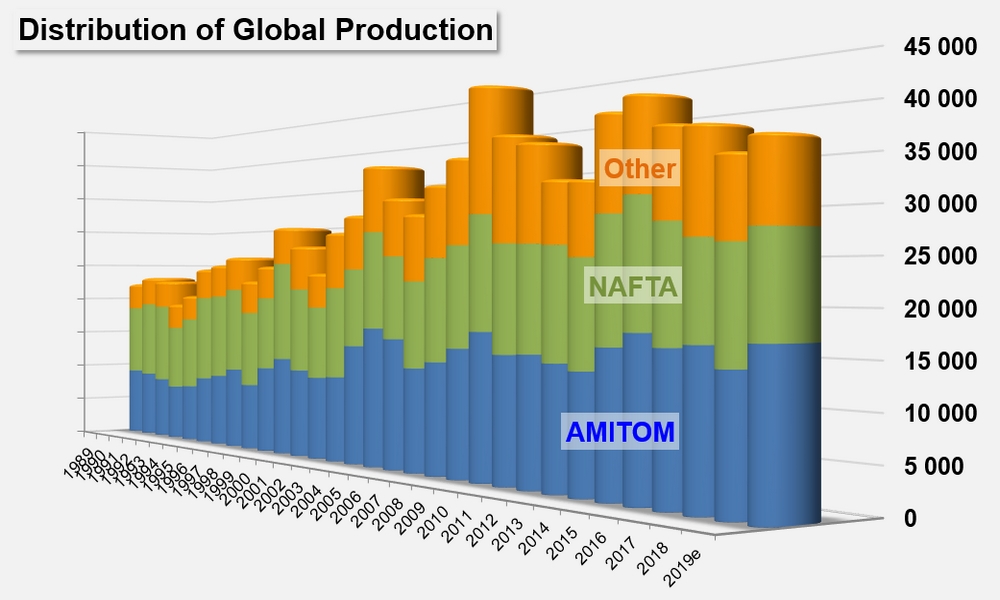 AMITOM members in the EU
In France, at the end of last week (36) 85,000 tonnes had been delivered. The weather has remained good despite some small rains yesterday and temperatures of over 30°C are expected during the next week (38). If the weather stays favourable, the harvest should continue until 5 to 10 October but the total production forecast is now reduced to 150,000 tonnes.
In Greece, the weather has remained good over the last two weeks. At the end of last week (8 September) 80% of the expected volume had been processed and quality and brix remained good. The forecast of 400,000 tonnes should be reached.
In Hungary, 2/3 of the crop was harvested at the beginning of this week (37). We had some rains and had to stop the factory for a few days. Usually the peak of our season is in between 20 and 30 August but this year it is a good 2 weeks later. Refraction before the rainy days was good.
The global forecast for Italy remains 4.7 million tonnes:
• In the North, the official OI data showed that as of 3 September 1.52 million tonnes had been delivered with an average brix of 4.81 and a penalty rate of 4.5%. It is estimated that about 1.8 million tonnes had been processed at the end of last week (36). Rain at the weekend has however since stopped the factories for one or two days and they are restarting today. It seems now difficult to reach 2.4 million tonnes but the exact surfaces remaining to be harvested will be communicated tomorrow by growers and a new forecast released in a few days.
• In the Centre & South, a satellite survey showed that 9,900 hectares remained to be harvested on 5 September. At the usual yield of 80 t/ha it means 750,000 tonnes at tomatoes to be added to the 1,550,000 tonnes already processed at that date. The forecast therefore remains 2.3 million tonnes. There were some rains over the last two weeks, but they did not affect the harvest and the forecast for the coming days is good with temperature rising again so the harvest should proceed as expected.
In Portugal, no changes to report. We are at 70% with good quality and a normal development.
In Spain, in Andalucía, the campaign is almost finished, the last factory closing in the next few days. It has been an average campaign with good quality and average yields. Meanwhile in Extremadura, factories are still working at good pace and most of them will work until the last week of September. About 75-80% of the forecast has been processed to date. The last ten days of August and beginning of September have been very hot. This has helped the development of attacks by Tuta absoluta. The yields of the early and medium tomato have been pretty high, and the campaign has run with no problems so far. We estimate now that 3.1 million tonnes will be reached. 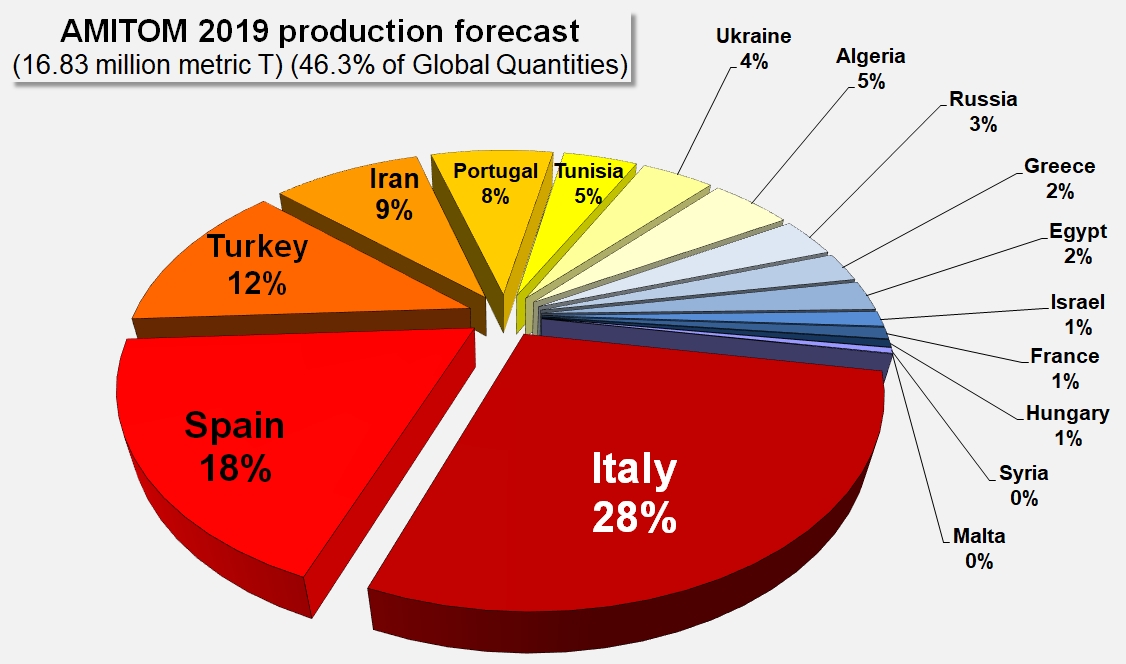 Other AMITOM members
In Egypt, we are now in the last loop of the summer season. Harvesting has started but the full capacity should only be reached within the next 7-10 days. Now only 3 plants -including P&J company- out of 15 plants are processing. Field yields are very good, also quality is good with no pest. The winter crop also looks very promising. It is a good season overall and the total volume remains at 400,000 tonnes.
In Iran, the main production season has had a delay and it started only a couple of weeks ago.  At the start of September, only about 15% of the forecast had been achieved. Since the major part of Iran’s crops will be harvested in the coming month, the final volume can only be confirmed at the end of September.
In Russia, the forecast remains the same (550,000 tonnes).
In Tunisia, tomato processing forecasts are maintained at 760,000 tonnes with 118,000 tonnes of paste and 15,000 of canned. Processing is continuing in only three factories sourcing from the regions of Jendouba and Kef (North West). Until September 10, 755,000 tonnes had been processed.
In Turkey, the harvest is continuing with good weather and a good forecast for the next ten days. Factories started to slow down at the end of August with some closing and the harvest should go on until 25 to 30 September. General quality and brix are now dropping, and factories are not at full capacity anymore, but the total target remains 2.1 million tonnes.
In Ukraine, the forecast remains 730,000 tonnes. The weather is ok.

Other WPTC members
In California, the estimate is to process 989,926 short tons (898,045 metric tonnes) for this week (37). At the end of this week (14 September) the industry will have processed 8,128,977 short tons (7,373,597 metric tonnes), this will put us approximately 1.65 million short tons (1.49 million metric tonnes) behind last year’s pace. To date solids and quality are performing close to historical averages for this time of year. Tonnage continues to come in overall below contract, it now appears that we will be below the 11.5 million short ton (10.4 million metric tonnes) estimate and the number will end up being closer to 11.0 million short tons (10 million metric tonnes). As always, a lot will depend on the weather between now and the end of harvest.
In China, 80% of the total forecast has now been processed. There was heavy rain in north Xinjiang on Tuesday this week (37), with the minimum temperature dropping to 9?. Then, starting from next week (38), production from Inner Mongolia to Xinjiang will be finished successively. The total forecast is unchanged at present.
In South Africa, the total production remains estimated at 130,000 tonnes. The harvest in the summer region should be finished in the next fortnight with an estimated volume of 90,000 tonnes, to be added to the 40,000 tonnes processed in the winter region.
Other countries
The USA Midwest has been cool but fortunately dry and sunny allowing for good crop progress and uninterrupted harvest. Yield estimates are unchanged, and quality has been excellent.
In Bulgaria, the forecast is 40,000 tonnes.
Some complementary data 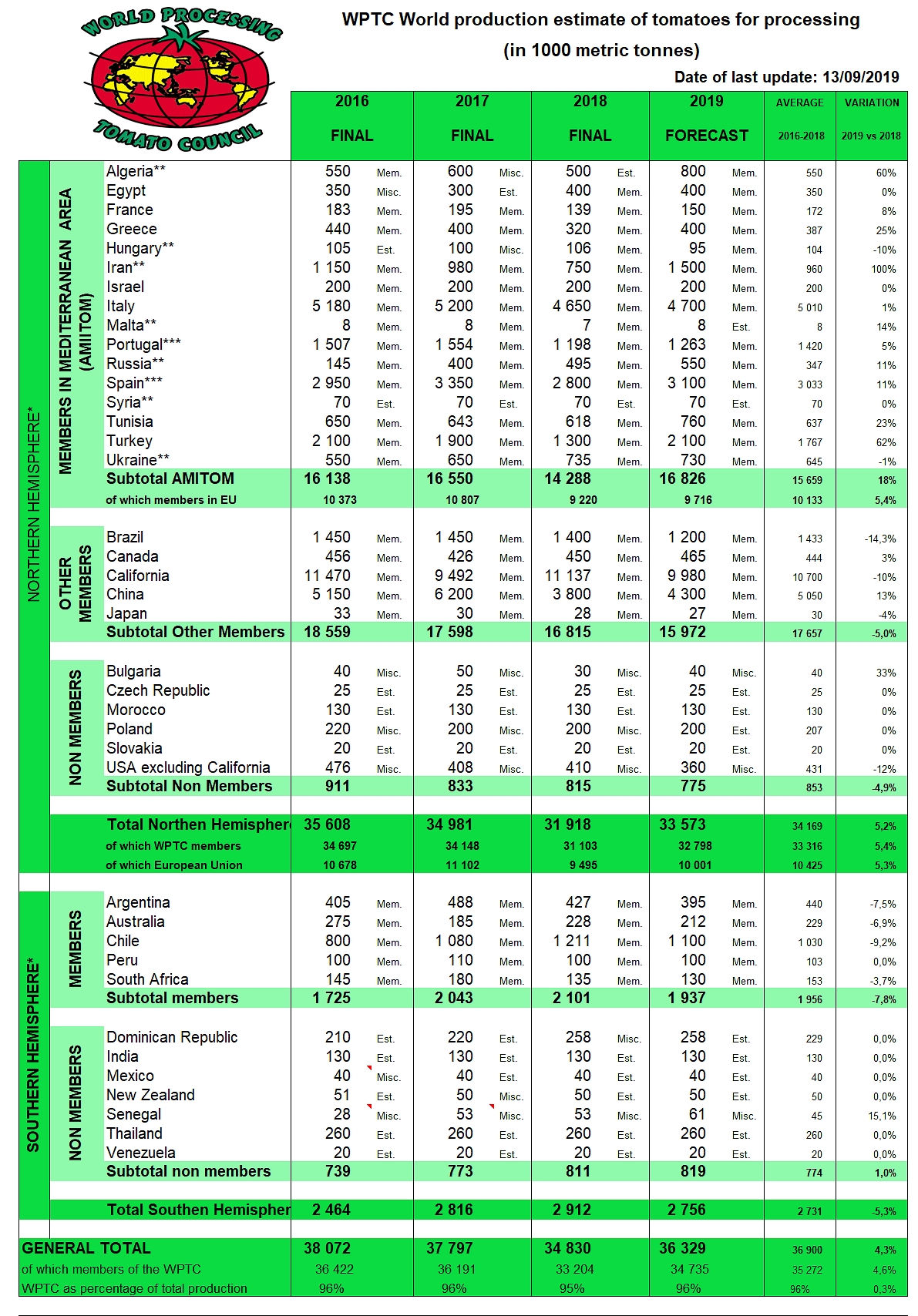