AMITOM members in the EU
In France, about 50,000 tonnes had been processed at the end of last week (week 34), which is 30% of the total forecast. Quality is good with an average brix of 5. Not all factories were at full capacity around 15 August because of slow maturation, and some even had to close a few days while it is usually the peak of production. Yields are now reasonably good. The forecast is maintained at 150,000 to 155,000 tonnes as the crop in September looks promising.

In Greece, hot weather this week (week 35) causing some problem in the south, with lower yields. All factories are now at full capacity and brix is good at about 5. At the end of last week (week 34), 230,000 tonnes had been processed, 58% of the total forecast which remains 400,000 tonnes.

In Hungary, production started late on 15 August instead of around 5 August. Full capacity slowly builds up due to the late planting issues and little cooler summer (nights) weather. Quality is good as usual. To date, only about 20% of the crop has been harvested, when it is normally 30 to 50%.

The global forecast for Italy is revised down to 4.7 million tonnes:
- In the North, the last official figures reported a very low volume of about 800,000 tonnes processed as of 18 August with an average brix of 4.83 and penalties of 4.4%. Weather conditions during the last two weeks (34 and 35) have been good and it is estimated that about 1.2 million tonnes had been processed by 27 August. This is 50% of the lowered forecast of 2.4 million tonnes.
- In the Centre & South, the situation is similar with a reduction of supply to the factories due to reduced yield leading to a reduction of the forecast to 2.3 million tonnes.

In Portugal, the production is now in its fourth week, with another four weeks expected, and about 50% of the total forecast has now been processed. All factories are now at full capacity and quality is very good, with good colour and high brix, in line with the country’s reputation, but field yields are average. The weather is now stable and warmer.

In Spain, the harvest is now reaching the end in Andalucía with one factory already closed and the others due to close during the first week in September. It has generally been a good season. In Extremadura, the high pressure on the factories is now easing after more than ten days and there is no special problem and high yields and good quality. Some rains hit the region early this week, but with no hail, and they only slowed down the harvest for a day or so. In Navarra, there have also been storms over the last two weeks, but no damage was reported. Factories should reach full capacity this week although so far yields are lower than expected. Altogether, it is estimated than 55 to 55% of the total forecast (3 million tonnes) has been processed to date in Spain. 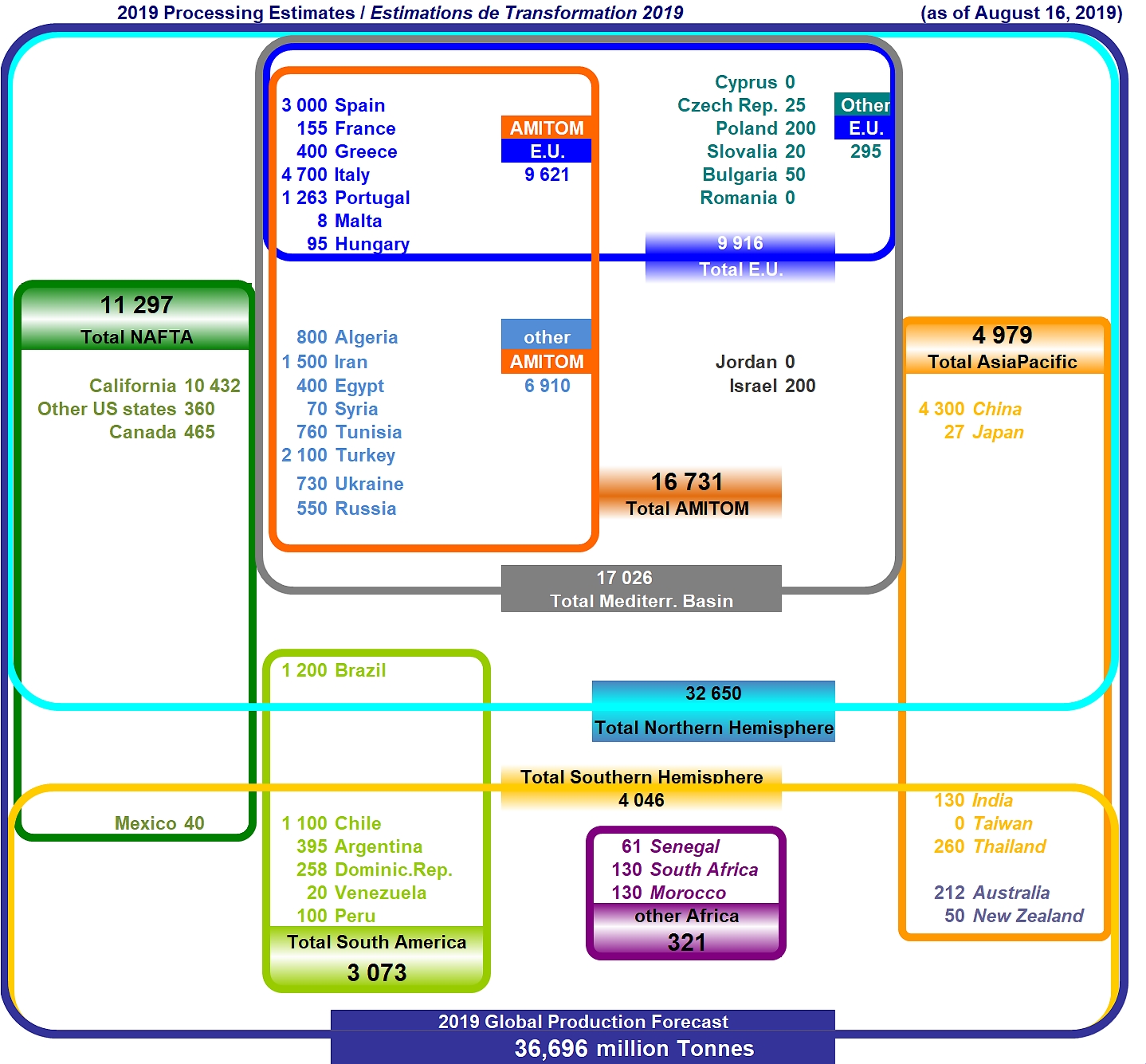 Other AMITOM members
In Egypt, the harvest is now in the middle of the summer season but only 5 (including P&J company) out of 15 plants are processing as last loop of summer season shall start within a week. Field yields are good and there are no pest and quality is good. The winter crop also looks promising so this is a good season overall and the total volume processed should be about 400,000 tonnes.

In Russia, all the main factories are now running at full capacity. At the end of last week (week 34), only about 30% of the total estimate of 550.000 tonnes had been processed. The weather condition in September and first part of October will be crucial.

In Tunisia, the forecast is revised to 760,000 tonnes against 800,000 tonnes presented at the last meeting. The production forecast for double concentrate is 115,000 tonnes and that for cans is 20,000 tonnes. The processing season is almost complete, only 8 out of a total of 26 plants continue processing with a daily intake of about 4,000 tonnes of tomato from the Jendouba region (North West). As of 27 August, 720,000 tonnes had been processed.

In Turkey, there is no change in the forecast. The harvest is almost finished in the south. It is still at its peak in the north but should start to slow down from next week and carry on until late September.

In Ukraine, hot and dry weather in the second half of August promises good yield and quality of tomatoes in September. During the whole August tomatoes suffered delayed ripening and lower than expected field yield. Processing goes with interruptions and below the capacity. Average yield is in the range of 75 – 80 mT/ha. Average Ukrainian brix is 4.5. Factories are having lower yield as a result. The main reason of this is unfavourable weather in June and July and wet beginning of the harvest. The forecast is revised down to 730,000 tonnes. 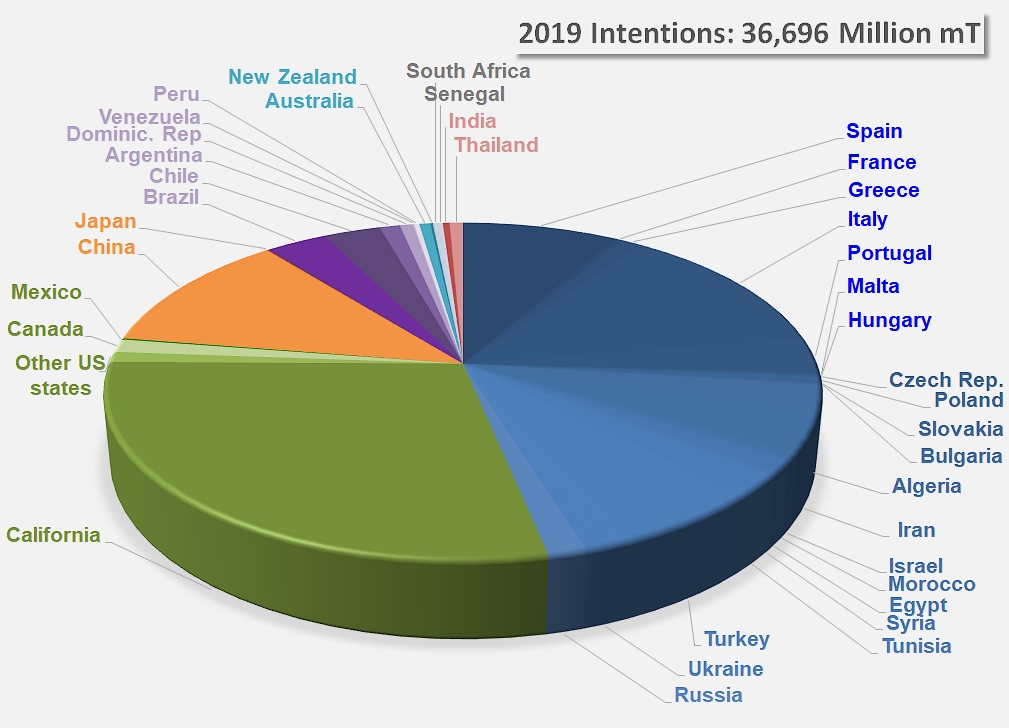 Other WPTC members
In California, the estimate is to process 1,085,212 short tons (984,295 metric tonnes) for this week. At the end of this week (31 August), the industry will have processed 6,144,337 short tons (5,573,743 metric tonnes), this will put California approximately 1.4 million short tons (1.27 million metric tonnes) behind last year’s pace. Not much else has changed from last report. To date solids and quality are performing close to historical averages for this time of year. USDA/NASS released its latest crop estimate on Wednesday 28 August (attached) and it reflected the same reduction we have been reporting and that is a crop of 11,500,000 million short tons (10.43 million mT). WPTC will continue to monitor deliveries and make a tonnage adjustment in the next report if conditions dictate it.

In Ontario, there is nothing new to add since the last update as harvest has only just begun last week (week 34). More information should be available for the next update.

In China, the weather is getting hotter this week, it is good for tomatoes ripeness. At present, the quality is good and the production is normal. To date, the processed quantity is about 50% of the predicted total harvest.

In Japan, the total volume seems to decrease due to the lack of sunlight and low temperature between June and July and is now estimated at 27,000 tonnes.

Other countries
The USA Midwest has started harvest and yields are coming in slightly better than earlier predictions. The weather has cooled down and is forecasted to remain cool for an extended period and will slow ripening for the next ten days. Quality has been good. 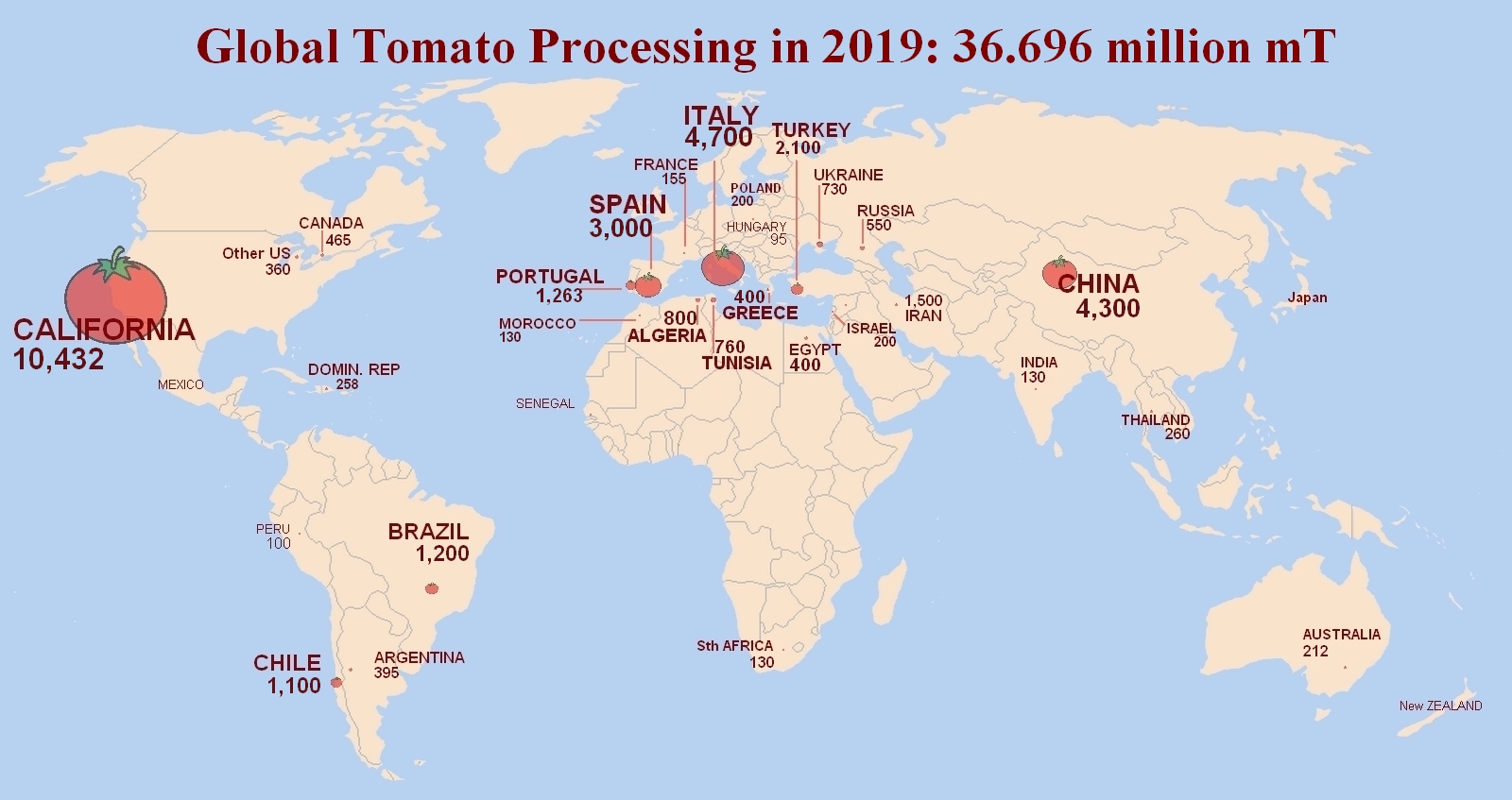