02/03/2018 - François-Xavier Branthôme - Lire en français
In 2013, Québec set up a cap-and-trade system for greenhouse gas (GHG) emissions rights. This measure was aimed at introducing a "carbon cost" into the economy, which the Québec government stated was essential in order to rise to the challenge of climate change.
One year later, Québec linked its system to California's system in the context of the Western Climate Initiative, effectively setting up the largest carbon market in North America. This market was again extended when an agreement was signed with Ontario in September 2017, formally linking up of the markets of Québec, California and Ontario on 1 January 2018.
The carbon market is primarily aimed at companies from the industrial sector that emit into the atmosphere at least 25 000 metric tonnes of CO2 equivalent per year. The way this market functions is similar to that of the European ETS system.
• The government sets overall annual caps on GHG emissions units (maximum emissions limit). These caps decrease progressively over the years.
• The companies to which this system is applied must purchase emissions rights for every tonne of GHG discharged into the atmosphere.
• Enterprises working in industrial sectors that are particularly exposed to national and international competition are entitled to receive free GHG emissions units according to their production levels. 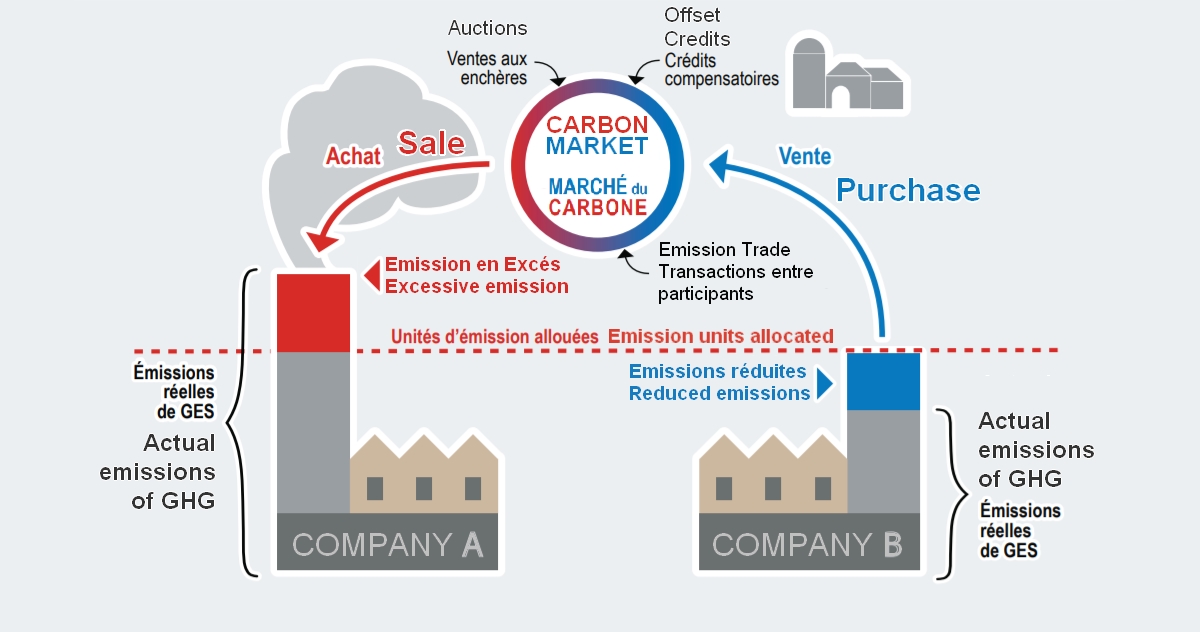 • Operators who are able to reduce their GHG emissions below the number of units allocated (for example, by developing green technologies or using processes that pollute less) can sell their spare units on the carbon market to other companies whose GHG emissions exceed their allocation.
• The number of units allocated on a cost-free basis to the relevant companies is progressively reduced in order to incite operators to invest further efforts into reducing their GHG emissions.
Québec is aiming at reducing its GHG emissions by 20% compared to the 1990 level before 2020, and by 37.5% by 2030, while committing to a decrease of 80% to 90% by 2050. So the carbon market has become a green tax incentive tool that has led to both a reduction in GHG emissions and to the development of a sector that is strategic to economic growth.
Each year, joint bidding auctions for emissions units are regularly organized in February, May, August and November. On 21 December last year, Isabelle Melançon, Québec's Minister for Sustainable Development, Environment and the Fight against Climate Change published the results of the auction sale of GHG emissions units that was held jointly with California on 14 November 2017.
In the context of the sale, 79 548 286 emissions units were sold at a price of CAD 19.10 (USD 15.06 or EUR 12.80), and 9 723 500 emissions units for 2020 were attributed at a price of CAD 18.72 (USD 14.76 or EUR 12.50). The sale generated gross income of approximately 230 million Canadian dollars for Québec.
"The carbon market is the spearhead of our action in the fight against climate change. [...] To date, the carbon market has generated over 2.04 billion dollars for Québec. The entire amount goes to supporting Québec’s companies, municipalities, institutions and citizens in transitioning to a low-carbon world," declared Ms. Melançon.
Sources: newswire.ca, mddelcc.gouv.qc.ca
Some complementary data
http://www.mddelcc.gouv.qc.ca/changementsclimatiques/marche-carbone.asp
(See also our article: EU: the high stakes of carbon policy and California Cap and Trade)
Back