After reportedly being in trouble in January and February due to import restrictions put in place by various countries in response to the CoVid crisis (see our March 2020 article, in the appendix), Chinese exports of tomato products under tariff codes 200290 do not seem to have suffered as much as expected from the redirection of supply flows that have been mentioned in explaining the slowdown recorded at the start of the year. Although China's foreign sales did indeed fall in 2019/2020 by around 5%, compared to the relatively high result (921 400 metric tonnes) of the 2018/2019 marketing year, the performance of the latest marketing year for the concentrated tomato puree sector (878 600 mT, exported between July 2019 and June 2020) declined by only 1% compared to the average of the results recorded over the three previous marketing years (2016/2017, 2017/2018 and 2018/2019), remaining close to an average annual level of around 890 000 to 900 000 mT, which has been the norm since the 2013/2014 marketing year. 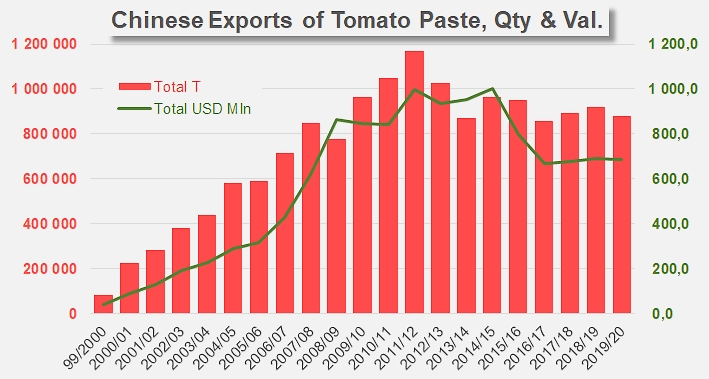 With a few rare exceptions, variations recorded over the past two years in the supply rates of the different customer regions for Chinese products only confirm the dynamics that have already been at work for a number of years. Several of the most important regions for Chinese foreign operations are once again showing significant downscaling of their purchases: West Africa (Nigeria, Benin, Guinea, Senegal, etc.), Mediterranean Africa (Algeria, Egypt) and Eurasia (Russia, Turkey, etc.) fit this pattern, as do Central America (Haiti) and South America (Brazil, Argentina). Conversely, while the United Kingdom, Germany, the Netherlands and Ireland have significantly reduced their purchases of Chinese products, exports to Italy have increased significantly over the past three years (generally assumed to be shipped in by companies in the south of the country, which then sell on repackaged products in smaller conditionings in the context of temporary import schemes). Indian and Pakistani purchases also contributed to maintaining the Chinese performance in 2019/2020, as did Philippine, Indonesian, Thai and Vietnamese purchases. 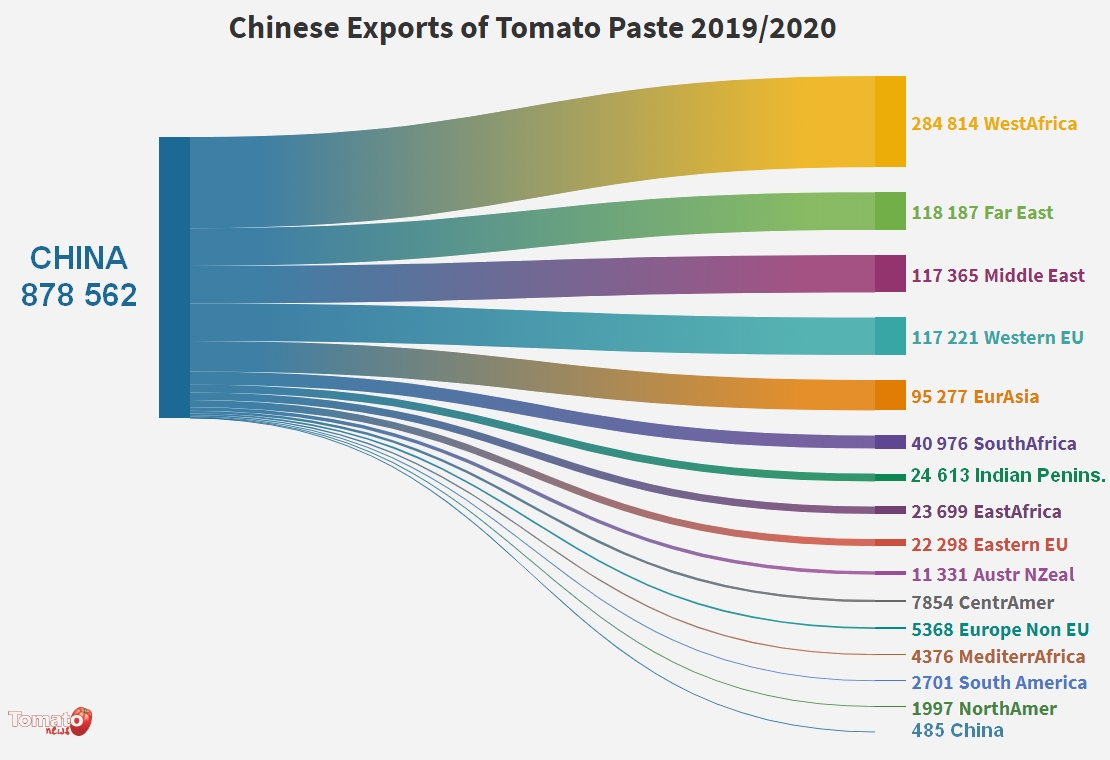 After taking account of the increases and decreases in trade flows to the different regions during the last marketing year, the total value of Chinese exports (tariff codes 200290...) in 2019/2020 still amounted to just over USD 687 million, practically matching the result of the previous year (USD 689 million).

Chinese foreign operations remain mainly based on the segment of products conditioned in packs exceeding 5 kg (drums and bins, tariff codes 2002919) intended for remanufacturing, a sector that is increasing each year, compared to products conditioned in packs of less than 5 kg (tariff codes 20029011), which are usually intended for the retail market. 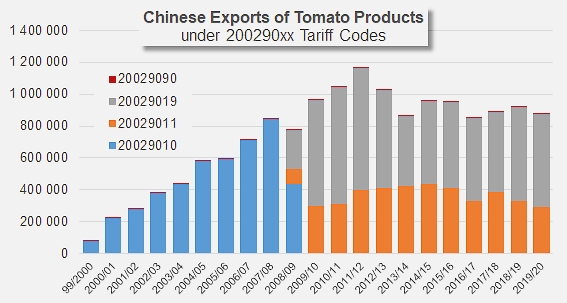 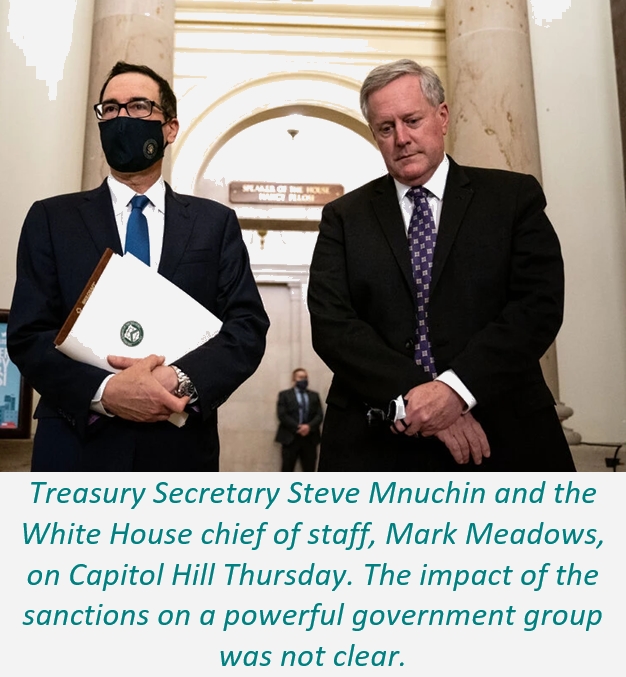 The sanctions, imposed by the Treasury Department’s Office of Foreign Assets Control, named the "Xinjiang Production and Construction Corps", an economic and paramilitary organization and powerful government entity that runs companies and farms in the Xinjiang region where it plays a central role in the development of the region. The sanctions also named two associated officials, Peng Jiarui and Sun Jinlong. The order is designed to prevent them from accessing American property and the US financial system, as well as to ban any economic transactions between them and American companies and citizens.

The sanctions are unlikely to have a great practical impact on officials or on the group's trade and international business dealings, which include overseeing some state-run companies that export products such as tomato paste.
The group’s direct exports to the United States were worth USD 43 million in 2018. Last year, the value of Chinese tomato products imported into the US amounted to just USD 1.02 million. More of its crops and other raw materials – the group is a big cotton grower – may end up being processed by Chinese companies for exports that are not included in the records of the group’s results. 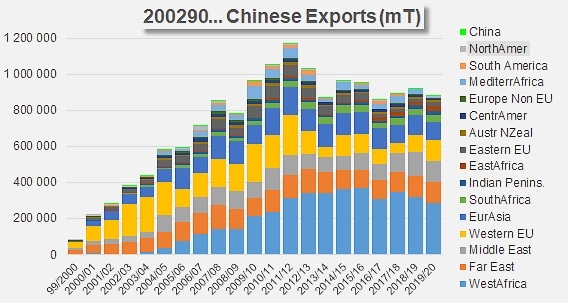 Some complementary data
With the exception of January and February 2020, the statistical data does not show a significant reduction in monthly Chinese exports of tomato paste. 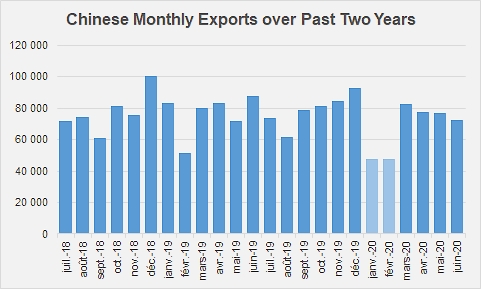 Processed quantities grew very rapidly in China over the period 1990-2010. Since that date, processing volumes have decreased, and for several years now have been averaging some 4.8 million mT per year.

The slowdown in Chinese foreign operations after 2010, expressed in terms of quantities and values, has been somewhat delayed and less marked than the slowdown observed in the quantities actually processed. 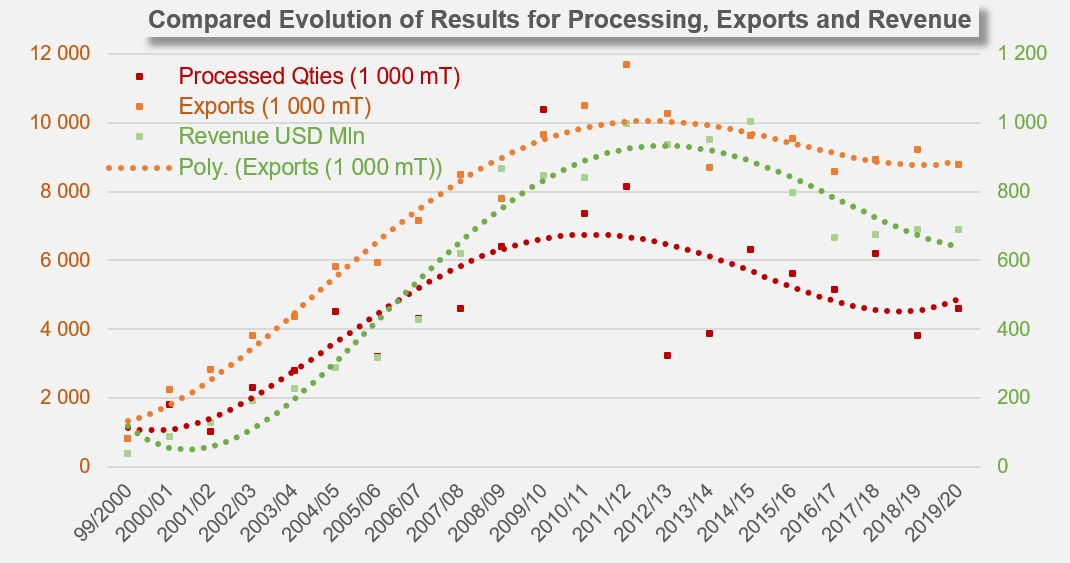