30/03/2020 - François-Xavier Branthôme - CoViD-19 - Lire en français
Chinese export figures for January and February 2020, i.e. for the start of the development period of the coronavirus epidemic, were released at the end of March.
The rapid spread of the coronavirus severely hampered all businesses and supply chains: over the January-February period, exports of all products fell 17.2% compared to the same period last year, and tomato products are following the general trend.
Several operators of the worldwide supply chain have reported requests from buyers wanting to replace, at least temporarily, their sources of supply of Chinese products, while waiting to know whether these products, or their packaging, or their delivery, could constitute carriers of disease transmission. As of 26 March, the WHO website states that "It is not certain how long the virus that causes Covid-19 survives on surfaces, but it seems to behave like other coronaviruses. Studies suggest that coronaviruses (including preliminary information on the Covid-19 virus) may persist on surfaces for a few hours or up to several days. This may vary under different conditions (e.g. type of surface, temperature or humidity of the environment)."
The duration most often mentioned is less than a week. It is therefore unlikely that "long distance" shipping of tomato products, whatever their origin, could have served as a vector for propagating the virus.

In any case, the first available figures seem to indicate a slight slowdown in Chinese activity. To fully understand the information published, it is important to note the accompanying disclaimer on the Trade Data Monitor website: "China January-February data divided equally into two months. China provided one set of trade statistics for January and February 2020 combined, instead of providing statistics for each month. Lacking further detail, [TDM has] divided the January-February figures in half, listing half in January and half in February. We expect March data to be released as one month in late April."

For the first two months of 2020, total Chinese paste exports amounted to 95 956 metric tonnes. The following graph compares the performances of January and February over the past ten years. 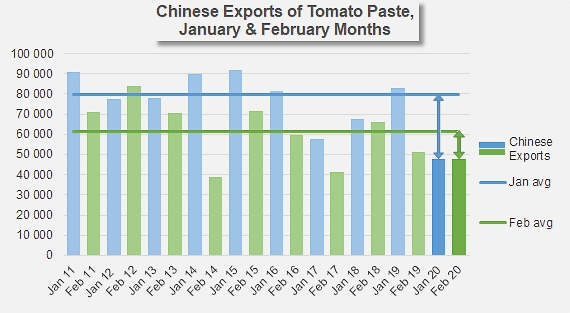 It is difficult to establish the relative role of the difficulties in shipping and the reluctance of buyers in buying Chinese products in the reduction of sales…. The arbitrary smoothing of the quantities over two months, combined with the early date of this first indication, does not allow objective conclusions to be drawn regarding the link between Covid-19 and the apparently low level of Chinese exports over the period January-February 2020.
For the time being, it is at most possible to observe a drop of 20 to 30% between the published results (95 956 mT) and the average performance of the same two-month period (January-February) of recent years (134 400 mT in 2019, 122 500 mT on average over 2017-2018-2019, 141 300 mT over the period running 2011-2019). However, it should be remembered that Chinese performances already dropped in February 2017 and February 2014 to even lower levels, of barely 40 000 mT. Only separate monthly figures for March, April and the following months might allow the contradiction or confirmation of the negative impact of a possible disaffection of the usual buyers of pastes of Chinese origin.

Regarding the distribution according to outlet destinations, a number of changes in dynamics appear to be notable in terms of quantities and significant in terms of variations, compared to usual trade flows. A comparison of the performances of January-February 2020 with those of the corresponding two-month period of previous years shows clear slowdowns in Chinese sales to Nigeria, Ghana, Togo, Benin and the Ivory Coast, but also to Russia, the Emirates, Oman, South Africa, as well as to the United Kingdom, Germany, the Czech Republic, Japan and Italy.
The statistics for the coming months will have to be carefully examined before concluding that Chinese sales have actually slowed and that there could be a consequential positive effect on export shipments from other countries. 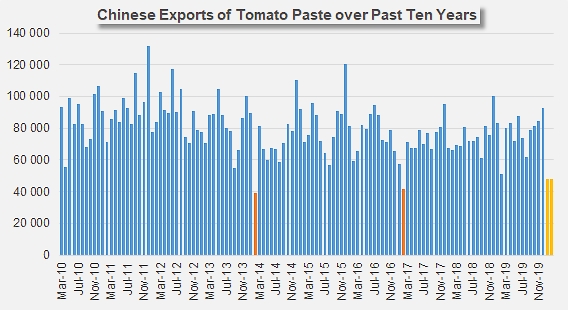