Chinese exports of products in the paste category (customs codes 200290) recorded a slight increase (3.3%) in 2018/2019, from around 30 000 metric tonnes to 921 410 mT compared to the previous year's result (891 728 mT in 2017/2018). This increase also boosted China's foreign activity by 2.4% compared to the average level of the three previous marketing years (899 961 mT between 2015/2016 and 2017/2018). This latter result confirms what appears to be the "normal" level of Chinese exports in the sector over the past six years, which has recorded very little variation, just above approximately 900 000 mT of products on average, in the context of a notable reduction in the number of processing plants and the volumes processed annually.

Surprisingly, this improvement in foreign sales was achieved despite a poor performance in the preferred market of the Chinese industry: trade-flows to West African countries recorded a significant decline in 2018/2019, confirming a pattern observed in this region over the past three or four years, which was an indirect consequence of the Nigerian government's implementation of an embargo on imports of pastes of foreign origin. This decision coincided momentarily with the development of trade-flows to neighboring countries (Cameroon, Benin, Ghana, Togo, Côte d'Ivoire, Guinea, Sierra Leone, etc.) and most likely more informal exchanges with Nigeria, but it was finally shown to be ineffective. For the past three years, reported exports of Chinese products to Nigeria have once again experienced impressive growth (from less than 54 000 mT in 2015/2016 to more than 107 000 mT in 2018/2019), which has naturally been accompanied by a sharp slowdown in sales to other countries in the region. Overall, West Africa, which absorbs a large third of China's foreign sales, saw its purchases decrease in 2018/2019 by more than 7% compared to the three previous years. The quantities shipped to this main outlet of the Chinese industry have thus dropped from more than 341 000 mT annually (between 2015/2016 and 2017/2018) to less than 318 000 mT.

West Africa is the only one of the five strategically important regions for Chinese foreign business (nearly 85% of total outflows) to have recorded a decline in the past marketing year.
With nearly 136 000 mT, the quantities exported to the Middle East (Emirates, Saudi Arabia, Yemen, Oman), which accounts for about 15% of Chinese foreign sales, have increased dramatically in the past marketing year, rising by one third compared to 2017/2018 and by 40% compared to the average levels of the previous three years.
This exceptional increase positions the Middle East in second place among the markets served by the Chinese industry, instead of the Far East. The tonnages absorbed by this latter group of countries (Philippines, Japan, South Korea, Thailand, Malaysia, etc.), which represents 12 to 13% of the outlets of Chinese operators, nonetheless recorded an increase of more than 11% in 2018/2019 compared to the average of the previous three years, to more than 115 000 mT. 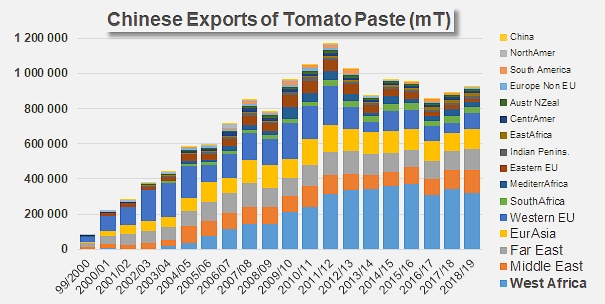 The position of Eurasia with regard to Chinese export operations is similar, since this region absorbs about 12% of Chinese sales of pastes. With just under 113 000 mT last year, Chinese exports grew by 13% compared with the previous year, but only about 1% compared to the average for the period running 2015/2016–2017/2018.
There are two antagonistic reasons for this situation. There has been a gradual decline in Russian purchases of pastes, on the one hand, which is part of that country's drive for self-sufficiency in the tomato products sector, leading to a significant decrease of the trade-flow (from more than 95 000 mT in 2015/2016 to less than 74 000 mT in 2018/2019). On the other hand, the temporary opening by Turkey of an exceptional import quota has caused a sudden increase in Chinese foreign sales to this destination (see our article in the appendix), which have therefore grown from less than 1 000 mT in 2017/2018 to more than 16 000 mT in the past marketing year. A significant rise in exports to Kazakhstan also helped offset some of the decline caused by the contraction in Russian volumes.
Only one market within the Western European group of countries plays a decisive role for Chinese foreign exports: out of a total of 95 000 mT in 2018/2019 for the Western European Union region, Italy alone accounted for almost 79 000 mT of products (which are generally known to be intended for the remanufacturing industry in the South of the country), a volume that is 45% higher than the average of the three previous years. Other major markets in the region (UK, Germany, the Netherlands, France, etc.) have instead reduced their purchases of Chinese products. For the western European region as a whole, quantities exported by the Chinese sector increased last year by 16% compared to the previous three years. 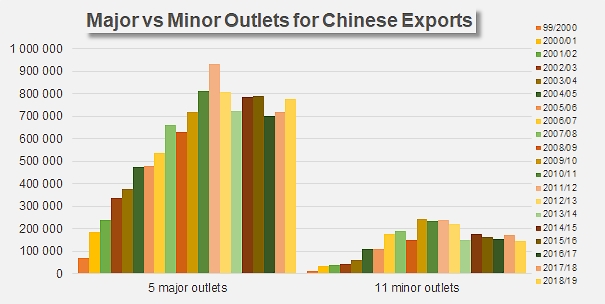 Conversely, the quantities exported to the ten other regions that make up the commercial landscape of the Chinese industry (and share a little less than 16% of the outflows) decreased in 2018/2019 by more than 27 000 mT (-11%) compared to the result of the 2017/2018 marketing year and by more than 18 000 mT compared to the average quantities shipped over the three previous marketing years.
In the Southern Africa region, particularly South Africa, Angola, Kenya and Mozambique, which account for around 3.5% of China's foreign sales, the level of operations dropped by 11% last year (4 100 mT) compared to the previous three years and 15% (5 500 mT) compared to 2017/2018 results. Other notable decreases contributed, by impacting other destinations, to the decline of Chinese exports, in Algeria, Poland and the Czech Republic, Haiti, etc. They were not compensated by the mostly modest increases recorded in India and Pakistan, Sudan, Australia, etc.

In a context of intense global competition, marked by a very aggressive price policy, it is not surprising that the decline of Chinese export activities has resulted in a significant weakening of related revenue. Within four years, the total declared value of Chinese exports in the sector has dropped from over USD 1 billion to less than USD 690 million, reducing the investment capacity of the companies involved.
The five main export destination regions (West Africa, Middle East, Far East, Eurasia and Western EU) accounted in 2018/2019 for about 83% of the total amount of goods exported. The eleven secondary destination regions (Southern Africa, Mediterranean Africa, Eastern European Union, Indian Peninsula, East Africa, Central America, Australia-New Zealand, Non-EC countries of Europe, South America, North America and China-Mongolia) only accounted for about 17% of the total revenue from China's foreign activity.

Refocusing on historical outlets
In the industrial and trade context defined by the two major groups of this commercial sphere, the year 2009/2010, marked by an exceptional level of processing activity both in China and worldwide (all operators remember it), was a turning point for China's external dynamics, after which the economic relevance of the tomato processing industry in China as a profit-making center was challenged.
Whether in terms of revenue or of quantities exported, it is clear that the competitiveness of Chinese products is expressed at its best level in the various national markets that are found in the five major regions. Conversely, it is also clear that the economic capacities of the recipient countries, transport costs, qualitative considerations, strong local competition and other factors may have been a hindrance to the development of Chinese exports in the eleven regions identified as secondary. Over the past ten years, the quantities exported and the revenue generated have followed more or less similar trajectories, in a markedly increasing pattern for the major strategic regions, with an equally pronounced propensity for decline in the "minor" regions.
To take the example of the quantities exported, the relative importance of the five major markets for China's overall operations has increased considerably over the past ten years, whereas the previous decade was clearly one of market growth for secondary markets and of the "relative shrinkage" of major markets: from 1999/2000 to 2009/2010, the share of the latter group gradually decreased from 85% to less than 75% of total Chinese activity. From 2010/2011 to the latest marketing year, the rise of secondary outlets, which had accounted for up to a quarter of Chinese exports of pastes, led to renewed activity on historically strategic markets, which in 2018/2019 provided more than 84% of the activity in terms of tonnage and more than 83% in terms of value. 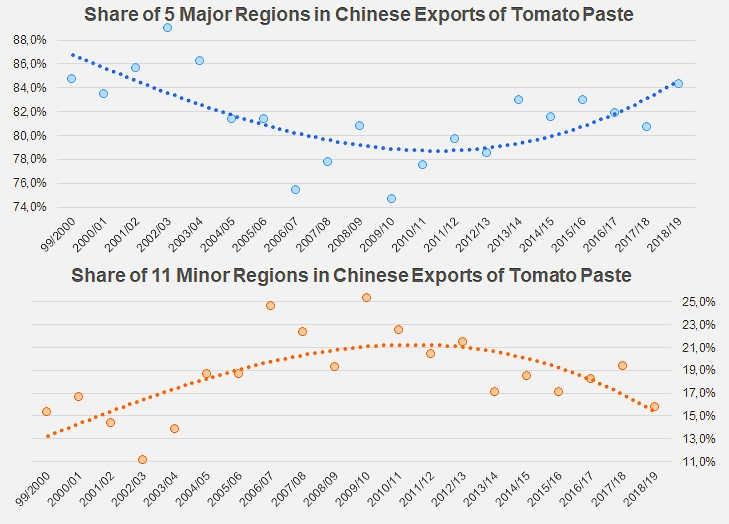 More than three-quarters of China's processing industry is set up in the Xinjiang region, and most of the exported tomato products are shipped through the "land port" of Alashankou, the largest railway hub in northwestern China, on the border with Kazakhstan.
In recent years, China-Europe cargo trains have become a frequent choice for tomato processors in the region. According to the local customs authorities, it takes just a fortnight to deliver Xinjiang products to most European countries, much less than the usual two months required by the traditional shipping route. The future will tell if the development of this export channel is likely to change the geography of Chinese paste exports.

Some additional data
Segmentation of Chinese exports under customs codes 200290 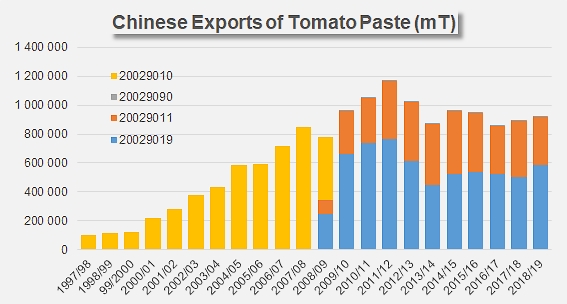 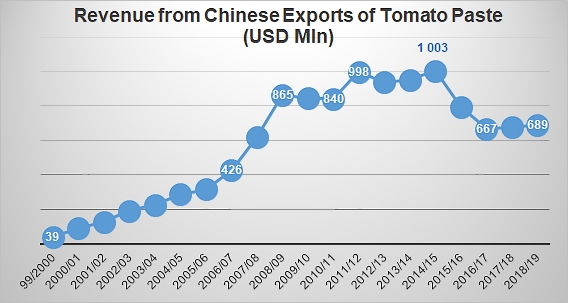 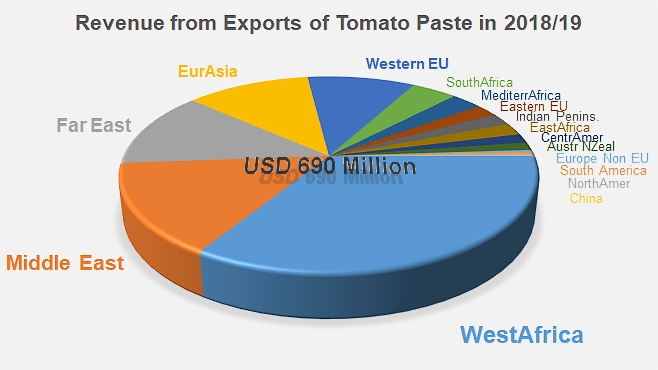 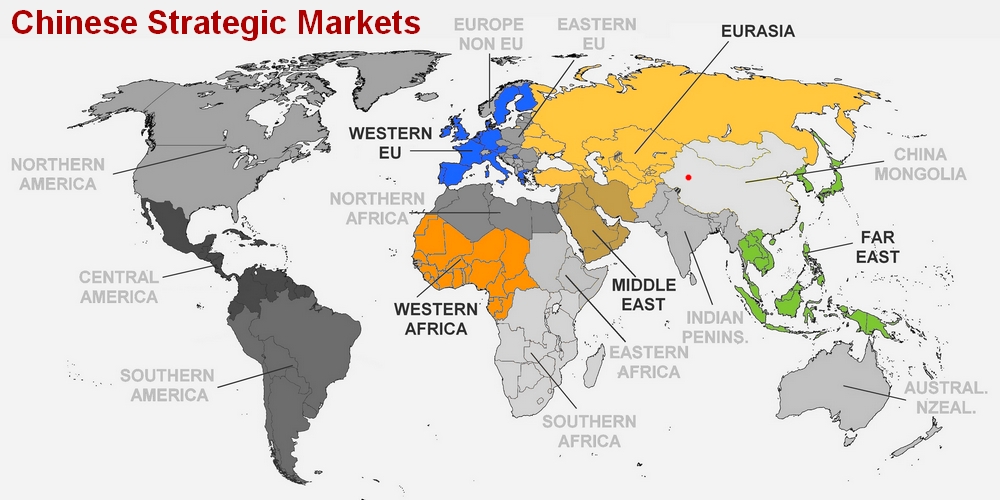