01/11/2019 - Ag Alert , François-Xavier Branthôme - 2019 Season
California's processing tomato harvest is all but done, and this time Mother Nature helped herself to a sizable piece of it.

The president and CEO of the California Tomato Growers Association, Mike Montna, said he thinks the final 2019 harvest will total about 11.1 million tons - or 1 million tons short of the originally intended amount. Late-season rain and hail ate into the crop, Montna said. "It kind of played out just how we expected," he said. "It's two out of three years now. (2017) was a rough crop, '18 was a good crop and '19 another rough crop."
As for inventory, the shorter harvest will "get us down to right around real tight inventories - close to maybe 4.2 or 4.1 million tons (at the) end of June," Montna said.

Many tomato farmers up and down the state had to postpone planting due to rains that lasted almost until Memorial Day. "We were planting well toward the end of May and into June," they said, noting that they intended to wrap up their 2019 harvest at the end of the week 43. 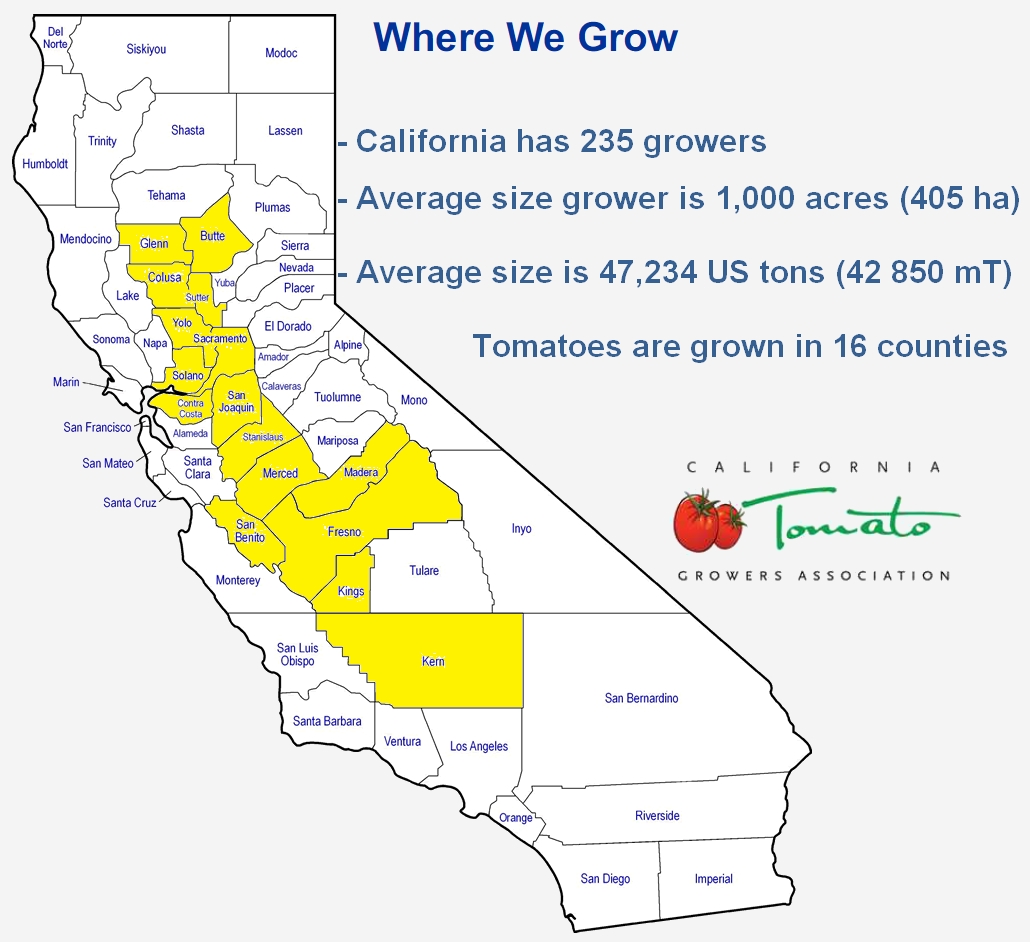 Farm yields: looking for "the next big thing"
They pointed their yields are coming in at about 40 to 41 short tons (sT) per acre (about 91 metric tonnes/hectare), below the statewide average of 47 to 48 sT (about 106 mT/ha) that Montna predicted. Processing tomato yields have averaged from 42 to 49 tons per acre (about 94 to 110 mT/ha) from 2008 to 2017, according to the California Department of Food and Agriculture, with the peak occurring in 2016. Growers explained tomato varieties have the largest effect on yields, but rotation is also a factor.
"In this country, if you run tomatoes after tomatoes, you usually suffer after the second year. […] You start suffering pretty rapid declines in yield," they said, adding that some of the best field this year had been out of tomatoes for six years.

Yields seem to be stable statewide, Montna said. "We're trying new varieties, new genetics, anything we can, but I think it's kind of just keeping us where we are," Montna said, "which is OK." To increase yields, he said, growers need to find "the next big thing," along the lines of drip irrigation, which gave tomato growers a yield boost over sprinklers.

On the financial front, tomato farmers were paid slightly more for their crop this year: USD 75 per short ton (about 74 Euro/mT, value 30 Oct.), up from $73.50 in 2018. "At the same time, minimum wage went up a dollar, which pushes everything higher," a grower said. "I wouldn't call it a wonderful year. I would say we're holding our own, but we're not out of the woods by any means." 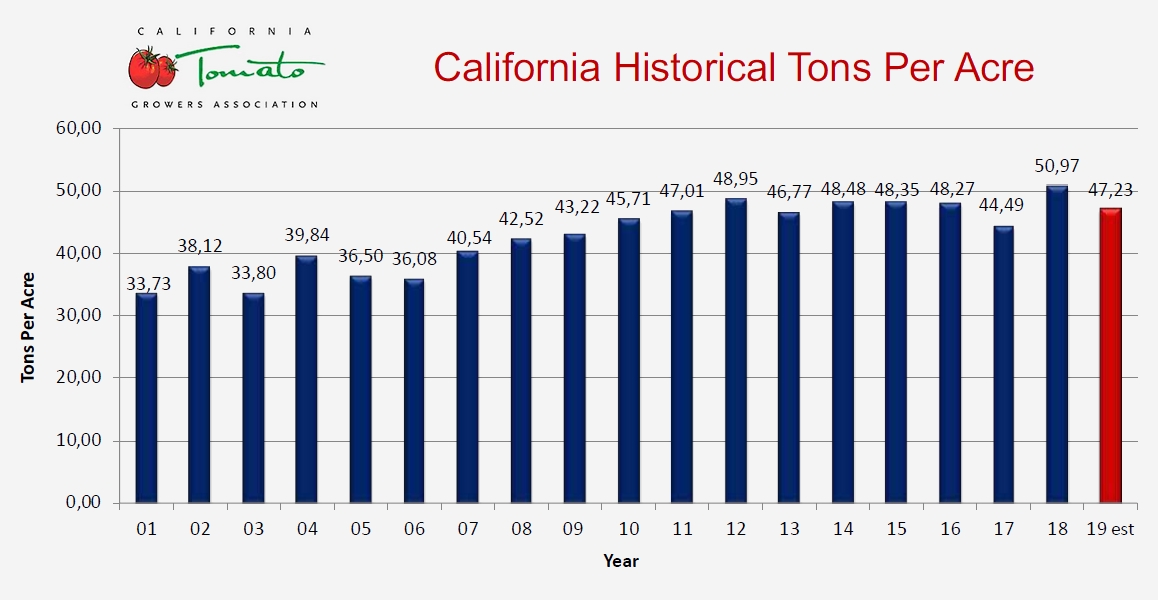 Montna repeated his earlier prognostication that 2020 will see tomato exports limited to the "NAFTA market," with little exporting to the European Union owing to an unfavourable exchange rate. One trade development, however, gave him reason for optimism.
"We're very pleased about the Japan trade deal," Montna said of the recently concluded agreement that, among other things, gradually eliminates Japanese tariffs on U.S. tomato paste. "For our industry, Japan is a top-five destination. There's some good partnerships there. I think it's a win-win for both countries."
For his part, Stuart Woolf, president and CEO of Woolf Enterprises in Fresno, which produces tree nuts and processing tomatoes, said he welcomes any trade agreement "that starts creating greater opportunity" for California agricultural products. For his company though, Woolf said he's looking to diversify more into specialty, value-added products such as paste, powder and oil in the domestic market. "I don't know that we're necessarily going down that path because we're concerned about trade," he said. "But those trade issues certainly support our strategy to do more business domestically."

A larger 2020 crop: “Tomato growers and canners have to be careful not to overdo it”
Montna said he foresees a larger 2020 crop. "I would anticipate processors wanting to do more and their intentions to be doing more, just to kind of get that inventory back up a little bit, because another short crop and we'd be tight," he said. Even so, he added, tomato growers and canners have to be careful not to overdo it. He said even though they "want to replenish our inventory, we don't need to be doing the volumes we did back in '14 or '15," when California produced 14 million and 14.4 million short tons, respectively, according to the U.S. Department of Agriculture.
During the latest Tomato Day Conference held at CibusTec, the president and CEO of the CTGA said that “productions levels for 2020 may grow slightly to fulfill increased demand and make up for some regional shortfalls, but overall major increases of production globally do not appear to be needed to meet customer demands”.

Among farm advisors who specialize in tomatoes, a new disease pressure is causing concern, on top of Fusarium wilt race 3 and tomato spotted wilt virus.
"Now we've got this new Fusarium crown rot, and in some fields it was devastating," said Brenna Aegerter, a University of California Cooperative Extension farm advisor in San Joaquin County. "It basically results in pretty quick decline of the field."
Plants infected with Fusarium crown rot will show yellowing along the margin of the oldest leaves, according to UC, followed by necrosis. Infected plants may be stunted and wilted, and the disease may kill older plants.
"It's not everywhere, but it's in enough fields that it's pretty discouraging for the guys that got hit with it," Aegerter said, adding that research is underway at UC Davis. Aegerter said tomato varieties resistant to Fusarium wilt race 3 are susceptible to Fusarium crown rot, so that's "not going to be the solution, unfortunately." Developing new varieties will likely take years, she added. 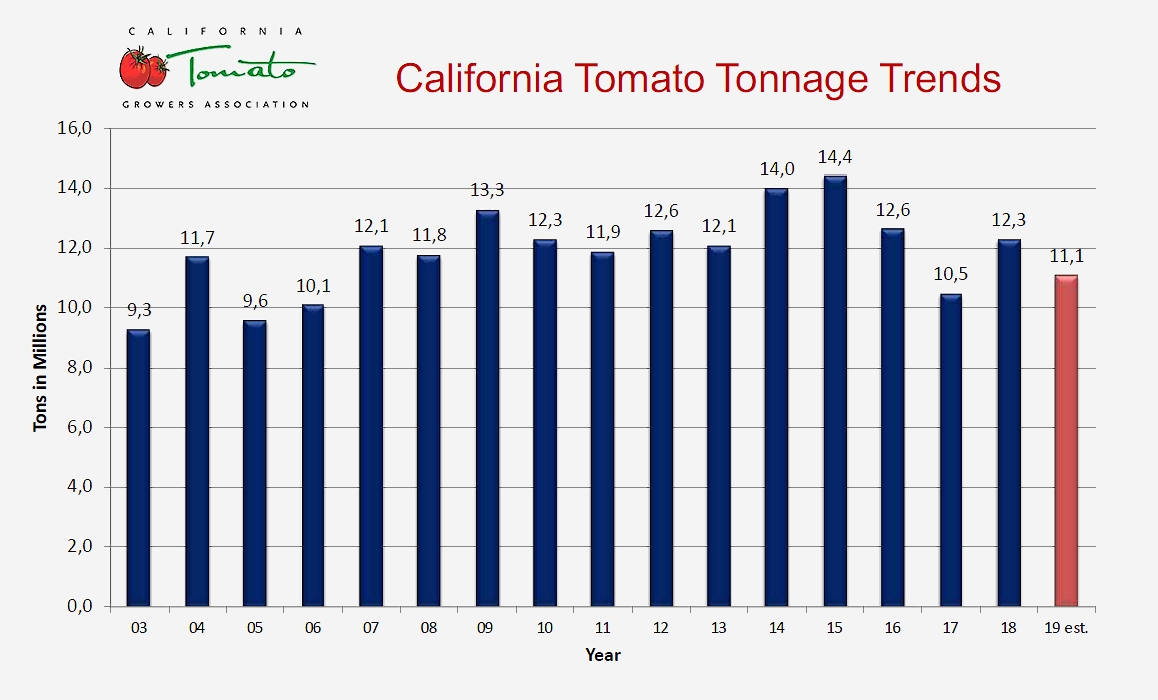