21/08/2019 - François-Xavier Branthôme - Lire en français
Sauces & Ketchup: a tough year for the world's biggest exporter
For the third year running, US foreign sales of tomato sauces recorded a major slowdown in 2018/2019. With "only" 307 200 mT of finished products exported between July 2018 and June 2019, the US industry recorded its worst results since 2013/2014, and gave up almost 18% compared to its average performance over the past three marketing years (approximately 374 000 mT). It is important to note that several other leading countries of the sector, like the Netherlands, Italy, Spain and Poland, conversely seem to have notably improved their results over the same period of time, probably taking advantage of the competitiveness of their products due to the relative weakness of their currency against the US dollar.
At the outcome of the 2018/2019 marketing year, the harshest setback for US exports was due to Canadian purchases, whose shipments of US ketchup and tomato sauce were brutally cut by one third, falling from more than 234 000 mT annually for the period running 2015/2016-2017/2018 to just over 160 000 mT in 2018/2019. Products of US origin usually account for more than 97% of Canadian imports in this category. The difficult commercial relations between the USA and Canada might have affected the intensity of the trade flow between these countries, but it is actually more likely that this spectacular drop is a collateral effect of the progression toward self-sufficiency developed by the Canadian industry in this sector.
The 2018/2019 marketing year was also notable for the lower volumes shipped to other major destinations for US operators, like Australia, South Korea, the Philippines, the UAE, Kuwait, etc. These drops far outweighed the increases recorded in sales to Mexico, Guatemala and Chile. 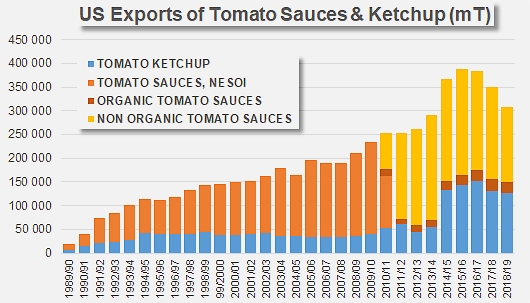 In 2010/2011, a tariff line was created specifically for sauces made from organically grown tomatoes (2103204010 "Organic Tomato Sauce"), as distinct from "conventional" sauces (2103204050 "Non-Organic Tomato Sauce"), helping to determine finer trend patterns in the exports of this category's products. Over recent marketing years, the contraction of exports has more directly impacted conventional tomato sauces, despite a more attractive evolution of per-unit prices, and has generally spared the category of organic ketchup and tomato sauces. In just a few years, foreign sales in this last category have grown in terms of volume, from 15 000 mT in 2010/2011 to more than 23 000 mT in 2918/2019, with the result that they accounted last year for close on 8% of the volumes exported in the sauces category. At the same time, sales of "conventional" sauces recorded a notable fallback (from more than 185 000 mT to less than 157 000 mT), to the point that they only accounted for slightly more than half of total volumes of sauces exported. Finally, over the same period of time, foreign sales in the ketchup category resisted fairly well, given that, despite a contraction in volumes in recent years, the quantities of ketchup exported leapt from 53 000 mT in 2010/2011 to more than 127 000 mT in 2018/2019, with the proportion of ketchup in the overall volume of "sauce" exports growing from 24% to 41% over the past marketing year. 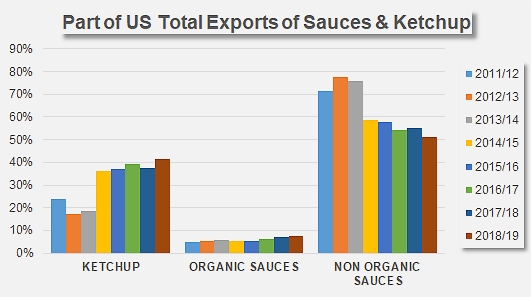 Financial turnover: a seven-year low
In economic terms, these recent changes have led to a further contraction (for the fourth consecutive year) that has dropped 2018/2019 results to their lowest since 2011/2012. With a total turnover from exports of USD 637 million over the past marketing year, foreign operations recorded a fallback of USD 39 million (-6%) against the performance of 2017/2018, and of USD 93 million (-13%) against average results for the past three marketing years (approximately USD 730). The canned tomato category is the only product segment to have recorded a positive progression in terms of quantity and turnover on export markets in recent years, but its relative importance has not been sufficient to counterbalance the negative dynamics driven by the paste and sauces categories.
With a value of slightly less than USD 57 million (less than 9% of the total amount) in 2018/2019, US exports of canned tomatoes have remained well below the performances of the paste sector (USD 269 million) and sauces sector (USD 311 million), but more importantly, they have not been able to compensate for the decreases of 12% and 16% respectively recorded for US foreign sales of pastes and sauces, compared with performances for the period running 2015/2016-2017/2018. 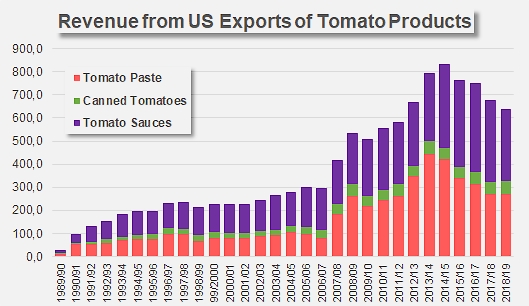 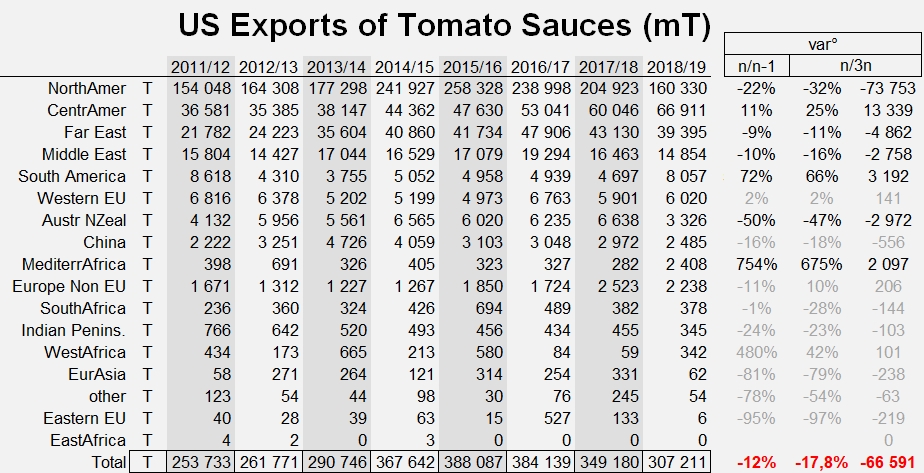