On 1 June 2019, the US industry declared its surplus inventories as covering requirements for less than one month of consumption. In other words, the volumes currently being held in the warehouses of US processors at this point in time should be sufficient to cover apparent disappearance (domestic sales and exports) until approximately the last week of October, a situation that is generally considered satisfactory by the US industry, just a few days off the launch date for the coming harvest.

According to a report published 1 July by the CLFP (California League of Food Producers), total stocks of processed tomato products in the United States as of 1 June 2019 have been recorded at 5.4 million short tonnes (sT) (4.9 million metric tonnes (mT)) in farm weight equivalent. This estimation is based on information collected from companies that represent 90% of operations and 96% of the US paste production. It indicates a drop of approximately 8% in available stocks, compared to 1 June last year (5.87 million sT, 5.32 million mT).

This result is all the more noticeable for the fact that it follows on from a considerable increase of processed volumes in 2018 (+16%, 11.6 million mT) compared to the 2017 season (10 million mT). In order to achieve the drop in inventories that has been recorded for June, there has to have been a significant increase in the annual rate of apparent consumption, which the CLFP estimates at approximately 3.5% compared to last year. Over the past 12 months, apparent consumption of tomato products amounted to 12.02 million mT (13.25 million sT), which is clearly up on the disappearance rate recorded on 1 June 2018 (11.6 million mT, or 12.8 million sT). The symbolic threshold of 1 million metric tonnes of monthly apparent disappearance, which had not been crossed since the 2014/2015 marketing year, has once again been exceeded this year, with a "monthly apparent disappearance" of 1.001 million mT (1.104 million sT). This level of apparent consumption recorded as of 1 June 2019 amounts to the 4th best annual performance over the past 25 marketing years, just below results for the 2013-2015 period.

As far as the available trade data seems to indicate, it does not appear that this jump in consumption is due to an acceleration in the performances of the US foreign trade in tomato products, and certainly not in paste. For the tomato paste category, exports over the twelve months between May 2018 and April 2019 (345 500 mT) were even slightly lower (-1%) than those of the period running May 2017 to April 2018 (350 200 mT) and well below (-13%) the average performance (398 300 mT) of the three previous marketing years in the US (1 May to 30 April). This upward trend for US domestic consumption, which was difficult to spot last season, seems to be rather clearer, with total demand for the 2018/2019 marketing year being estimated at slightly more than 12 million metric tonnes (or 13.25 million short tonnes). The requirements of the internal market have absorbed slightly more than 76% of the volumes recorded, which is a small increase compared to last year, but more importantly, an increase compared to what domestic consumption had absorbed on average over the three previous marketing years (less than 71% of total volumes).
At the outcome of this marketing year, it seems that individual US domestic consumption has climbed back over the threshold of 60 pounds (27 kg) per person, a level that had not been reached since the 2013/2014 marketing year.

This pattern observed in terms of US apparent disappearance dynamics depends on a clear consolidation of sales in "tomato paste for sale" (drums, bins and loose, +3.5% compared to operations recorded for the previous marketing year), whereas sales of pastes intended for remanufacturing have undergone a marked adjustment after a notable increase during the 2017/2018 marketing year. Volumes recorded as "paste for sale" (although some had already been sold) as of 1 June were 287 000 mT lower (farm weight equivalent, -10% approximately) than those recorded as available on 1 June 2018.

As for paste intended for remanufacturing, despite a slight slowdown, sales have been sufficiently dynamic for volumes recorded as of 1 June 2019 to be about 491 000 mT lower (farm weight equivalent, -12% approximately) than those recorded on 1 June last year.

With the first deliveries of regular tomatoes being expected for the end of week 27, the theoretical surplus (less than 900 000 mT in farm weight equivalent, whereas monthly apparent disappearance exceeds 1 million tonnes) does not seem likely to worry the US industry, whose operations for this 2019 season have been planned so as to produce volumes below the overall current absorption capacity. Indeed, the theoretical trajectory of annual apparent consumption has been stated at approximately 13.2 million sT (or 11.97 million mT). Beyond US intentions and processing prospects (11.34 million mT, or 12.5 million sT) US operators are already anticipating a result that is lower than the volumes initially announced, because of adverse weather conditions that affected the crops in springtime. The final result, which will only be known towards the end of October, should leave room for what experts of the industry described during the Avignon conference as a tense situation that is close to shortage. According to our estimations, based on the current rate of apparent disappearance, US stocks could be even lower in June 2020 than they have been in June 2019, and any surplus may have dwindled to almost nothing... 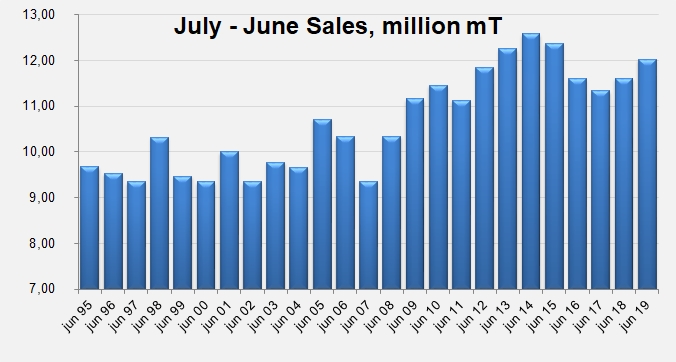 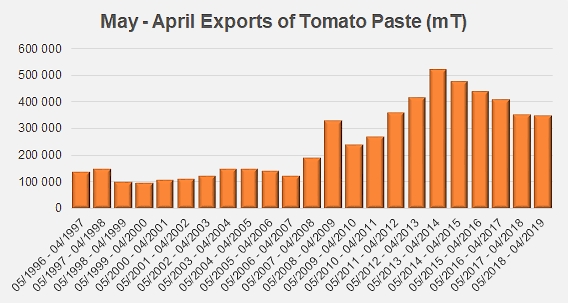 Surplus expressed as days of consumption 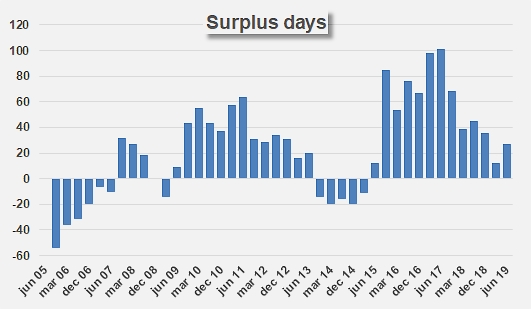