19/08/2019 - François-Xavier Branthôme - Lire en français
The results of US foreign trade in tomato products have once again dipped over the past marketing year. The two main categories (pastes and sauces) recorded considerable decreases both compared to the previous year (2017/2018) and compared to the average of the three previous marketing years, which is an indication of a longer-term pattern.
Last year, US foreign sales of pastes amounted to slightly less than 346 000 metric tonnes of finished products. The slight dip (-1%) compared to the 349 800 mT exported in 2017/2018 actually takes on a new significance compared to the average level of the three previous marketing years (385 000 mT, a -10% drop) as it signifies a shortage for industrial processing and agricultural production of about 227 000 mT of raw materials, according to our estimations.
In the sauces category, which is the other main focus of US foreign operations, 2018/2019 results were also disappointing. Last year, US operators exported slightly more than 307 000 metric tonnes of ketchup and tomato sauces, which is 42 000 mT less than in 2017/2018, but more importantly 66 600 mT (18%) below the average of the three previous marketing years. 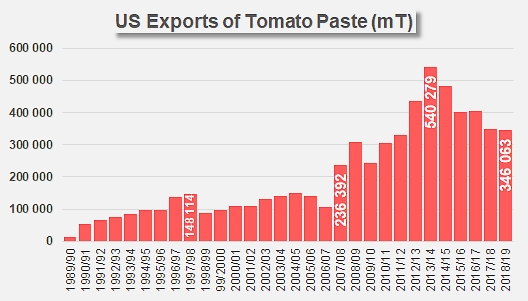 Tomato paste: the price to pay for a strong dollar
In the paste category, the slowdown mostly affected two main regions – Central America and the western European Union – which usually account for a major proportion of US outlets.
In the case of Central America, it is the decrease in the trade flow towards the Mexican market (which is generally considered a captive market) that has most profoundly impacted US foreign operations. With less than 49 000 mT in 2018/2019, shipments from the United States dropped 25% compared to the average level of the trade flow over the three previous marketing years (64 900 mT). This spectacular drop has been paralleled by equally notable decreases in sales of paste to destinations like Columbia, Trinidad and Tobago, the Dominican Republic, Panama, Costa Rica, etc. This drop has not been compensated by the few anecdotal increases recorded for shipments to Guatemala and Salvador. In the final count, US exports to the Central American region did not exceed 91 500 mT in 2018/2019 (against more than 115 000 mT on average between 2015/2016 and 2017/2018).
The drop in European purchases of US tomato paste can mostly be attributed to Italy, the Netherlands and the United Kingdom, which are the three biggest outlets of the region for US products. Compared to the average trade flow of the three previous years, results for the 2018/2019 marketing year dropped by almost 10 500 mT (-18%) of finished products on the Italian market, by more than 9 000 mT on the Dutch market and by 3 000 mT on the British market. Other countries of the region (Portugal, France, Sweden, Belgium) also reduced their purchases of US paste, with the result that the overall drop amounted to more than 22 100 mT of finished products. Spain was actually the only European market in 2018/2019 to increase its imports of US pastes, but it should be pointed out that the trade flow between the two countries had previously been virtually nonexistent for several decades.
West Africa is the third region where US foreign sales recorded a significant decrease in 2018/2019. Mainly due to the protectionist measures instituted by Nigeria and to the drop in imports to Ghana and Ivory Coast, regional purchases fell below 1 500 mT over the past marketing year, whereas they had amounted to close on 11 000 mT on average over the past three marketing years.

However, a small number of countries did intensify their purchases of US pastes. Over the past marketing year, shipments to Japan, South Korea and the Philippines increased in notable proportions compared to the three previous years, taking total import volumes to the Far-East region to approximately 67 000 mT, an increase of more than 12 000 mT (23%) against the average US performance for the period running 2015/2016-2017/2018.
This was also the case for a number of countries of the Middle East (UAE, Israel, Kuwait), whose purchases of US pastes grew by almost 6 700 mT against the previous marketing year, to more than 25 700 mT in 2017/2018. 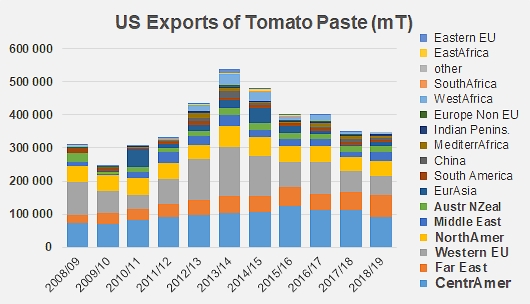 At the worldwide level, the context remains difficult, with US exports being penalized for several years by the strength of the US dollar. So it has made sense to continue with a cautious approach to the planning of production, which this year has seen US processors decrease their targets by 6% compared to results of the 2018 season. And it is indeed not impossible, given the impact of adverse weather conditions on the expected results for the current season, that the drop in volumes might exceed the decrease the US industry had intended in its efforts to adjust offer to demand. 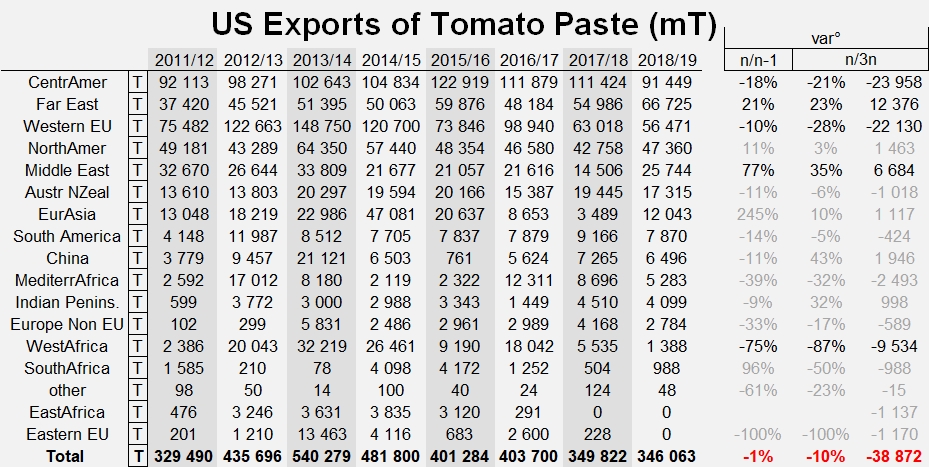 To be released shortly: 2nd part "Sauces & Ketchup: a tough year for the world's biggest exporter"