The most recent processing information collected by the WPTC in late October shows a global preliminary result of 37.266 million metric tonnes (mT), up 2.45 million tonnes from the relatively low output of the 2018 crop year (34.815 million mT). This level of production is also very close (-0.1%) to what was planned (37.32 million mT) when processing intentions were announced in February/March. In the end, it is close to the upper end of the range of current estimates for global consumption.
With 17.465 million mT processed, which represent nearly 47% of the overall activity, the AMITOM remains the world's leading region, ahead of the NAFTA zone (10.935 million mT and 29.3% of the season’s processed quantities worldwide) and all other regions (8.866 million mT and 23.8% of the total). 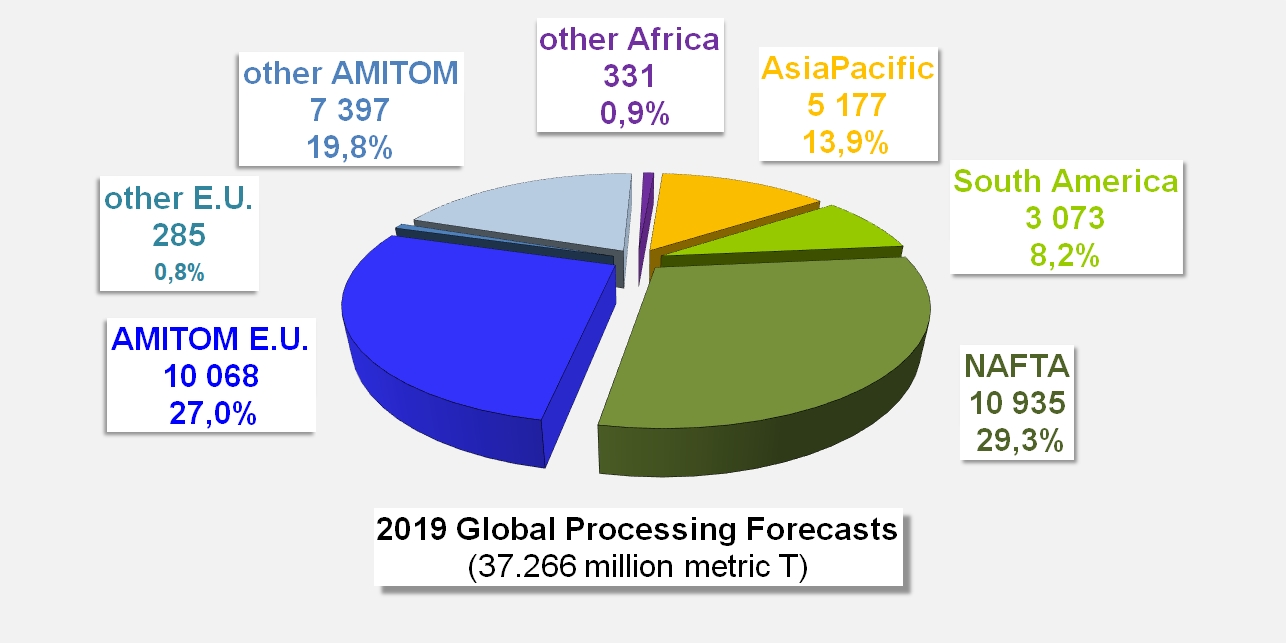 AMITOM members in the EU
In the North of Italy, the last factory was due to close on 24 October. The total volume will be approximately 2,370,000 tonnes from 36,600 hectares, and an average yield of 76 t/ha. This is 18% below the volume contracted and about the same as 2018’s production. The season was not easy with a lot of rain in May, causing delays in production, coupled with several hailstorms and extreme heats in July and August. Quality was average with an overall brix of 4.76.
In the South of Italy, after a bad start of the season, the best September in twenty years enabled to recover volumes to reach a total of 2.4 million tonnes. Farm yields in September was over 100 t/ha, bringing the season’s average to 88 t/ha. While fruit quality was very good, colour was poor and there were lots of green tomatoes harvested which reduced factory yields by 5 or 6% compared to 2018. So, while the volume processed this year was higher than in 2018, the volume of finished products is lower.
The final volume in Italy is increased to 4.8 million tonnes.

In Spain, the 2019 was also very good and final production is higher than forecast at 3.2 million tonnes. Extremadura processed a higher volume than expected due to record average yields of 97 t/ha (the previous record was 90 t/ha). Fruit quality was also good with an average brix of 4.9. A similar volume of 3 to 3.2 million tonnes is expected in 2020 unless there is a risk of drought if it does not rain enough during the coming winter.

In Portugal, the final result 1.41 million tonnes. The 2019 ran smoothly with no special issue. Field yield was very good at 97 mT/ha on average with an average brix of 5.2.

In Greece, the 2019 season was good, with no excessive rain and no serious heatwave. Yields and quality were good with an average brix of 4.9. This enabled to reach the objective of 400,000 tonnes. The volume processed in 2020 is expected to increase but this will depend on cotton prices.

In Hungary, the tomato season started late and was shorter than usual. Farm yields were lower than last year at 80 t/ha which resulted in a reduction of the total volume processed to about 100, 000 tonnes. Brix was good at 4.93 on average. Current expectations for 2020 are around 120,000 tonnes, 2019’s initial target volume.

Other AMITOM members
In Turkey, the final crop is estimated at 2.2 million tonnes following a reasonable season which could continue into early October. Weather throughout the season was not fantastic but there were no serious hails or rain. It is too early to estimate 2020 production.

In Iran, the forecast is now increased to 1.6 to 1.7 million tonnes as good weather conditions are enabling factories to continue processing into late October and early November.

In Ukraine, the final production of 720,000 tonnes is lower than the initial estimate, due largely to unfavourable weather in June and July and a wet beginning of the harvest. Average brix was low at 4.5. Production in 2020 could increase to 800,000 to 850,000 tonnes.

In Russia, the season started at the middle of August, two weeks later than usual but the estimate of 550,000 tonnes could be achieved due to a good October. The last two factories are closing this week (week 43, ending Oct. 26). Average yield was about 80 t/ha and brix 4.7. It is expected that production should increase to 600,000 tonnes in 2020. 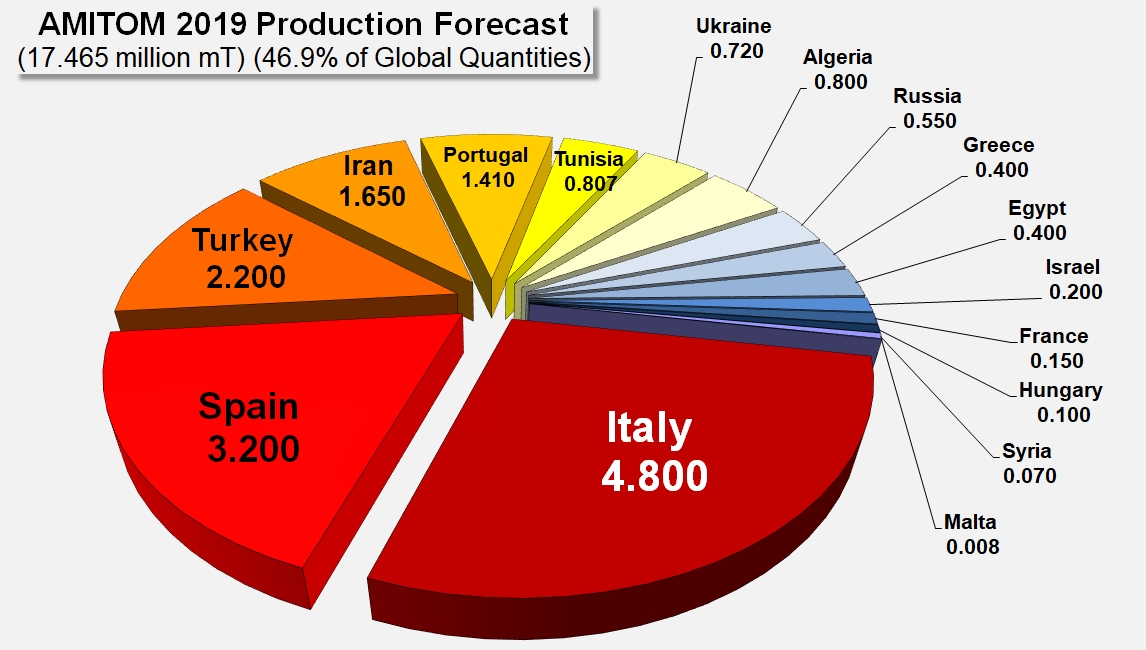 Other WPTC members
In California, the harvest is finishing this week and the final volume should be close to 11.1 million short tons (10.07 million metric tonnes), nearly a million tons less than expected. The final inventory at the end of the marketing year is projected to be low so it is most probable that production will increase in 2020 to maybe 13 million short tons.

In Chile, a total of 1.1 million tonnes were processed in 2019. Following the most serious drought in fifty years, a reduction of 30% of the surfaces planted is expected so production should be around 900,000 tonnes in 2020.

In Argentina, 395,000 tonnes were processed in 2019, slightly lower than expected due to some rains during the season. The harvest could however continue into May as there were no frosts. It is expected that a total of 5,660 ha will be planted for a production expected to be around 420,000 tonnes in 2020. Planting started in September and will continue into November. 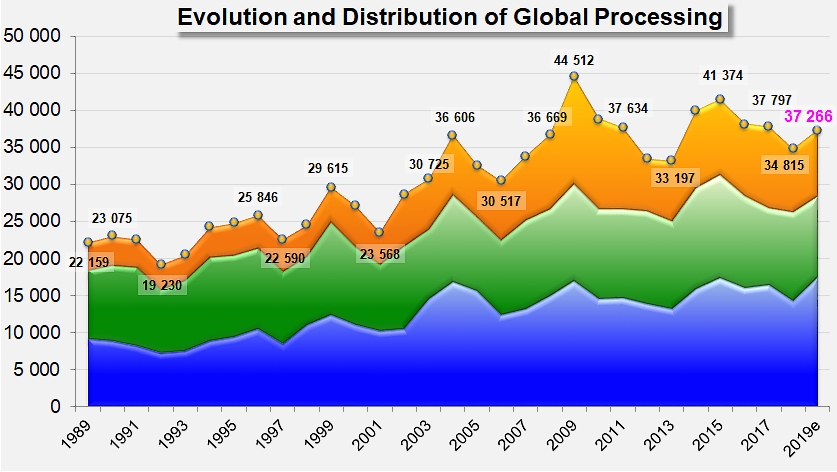 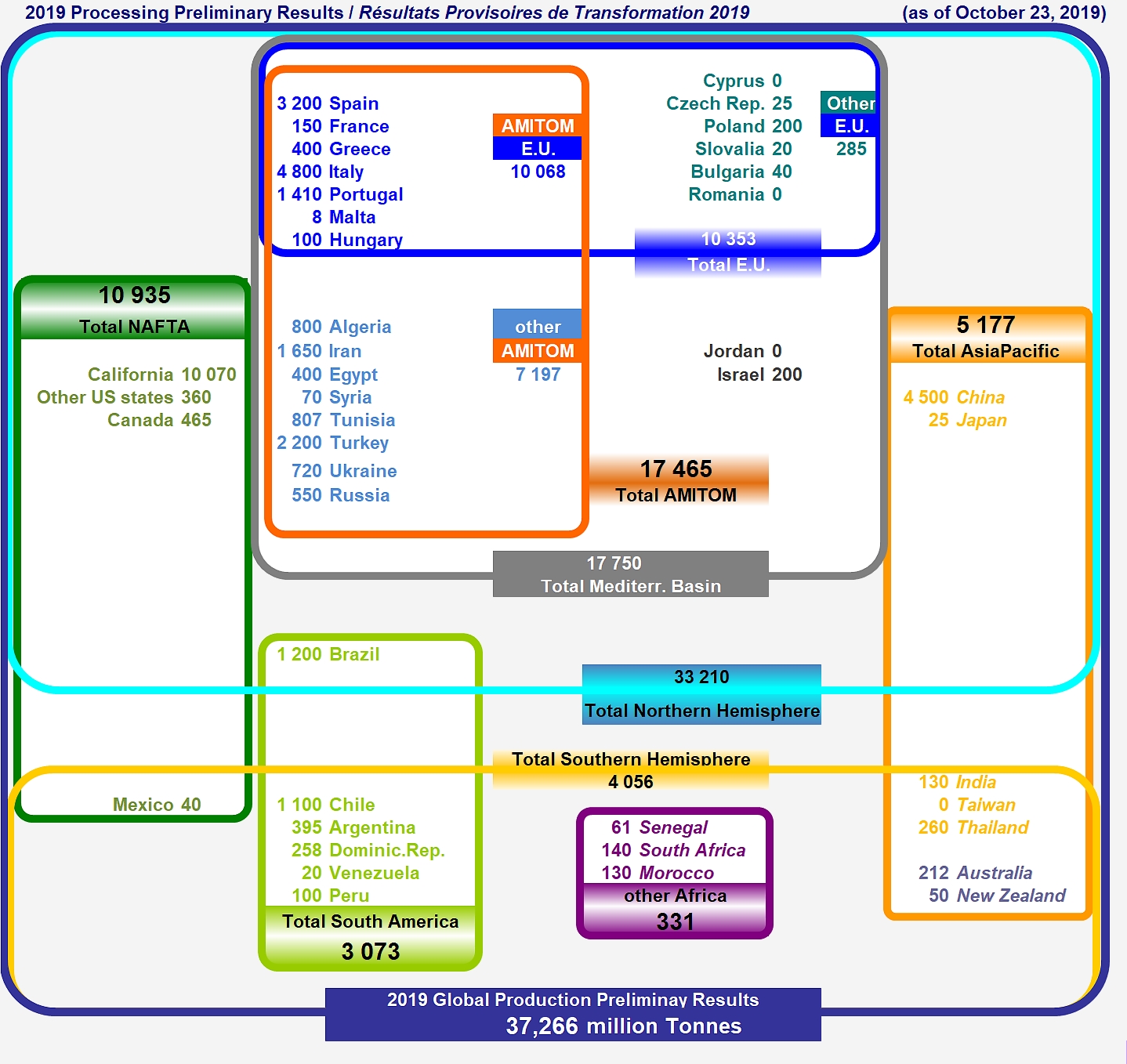 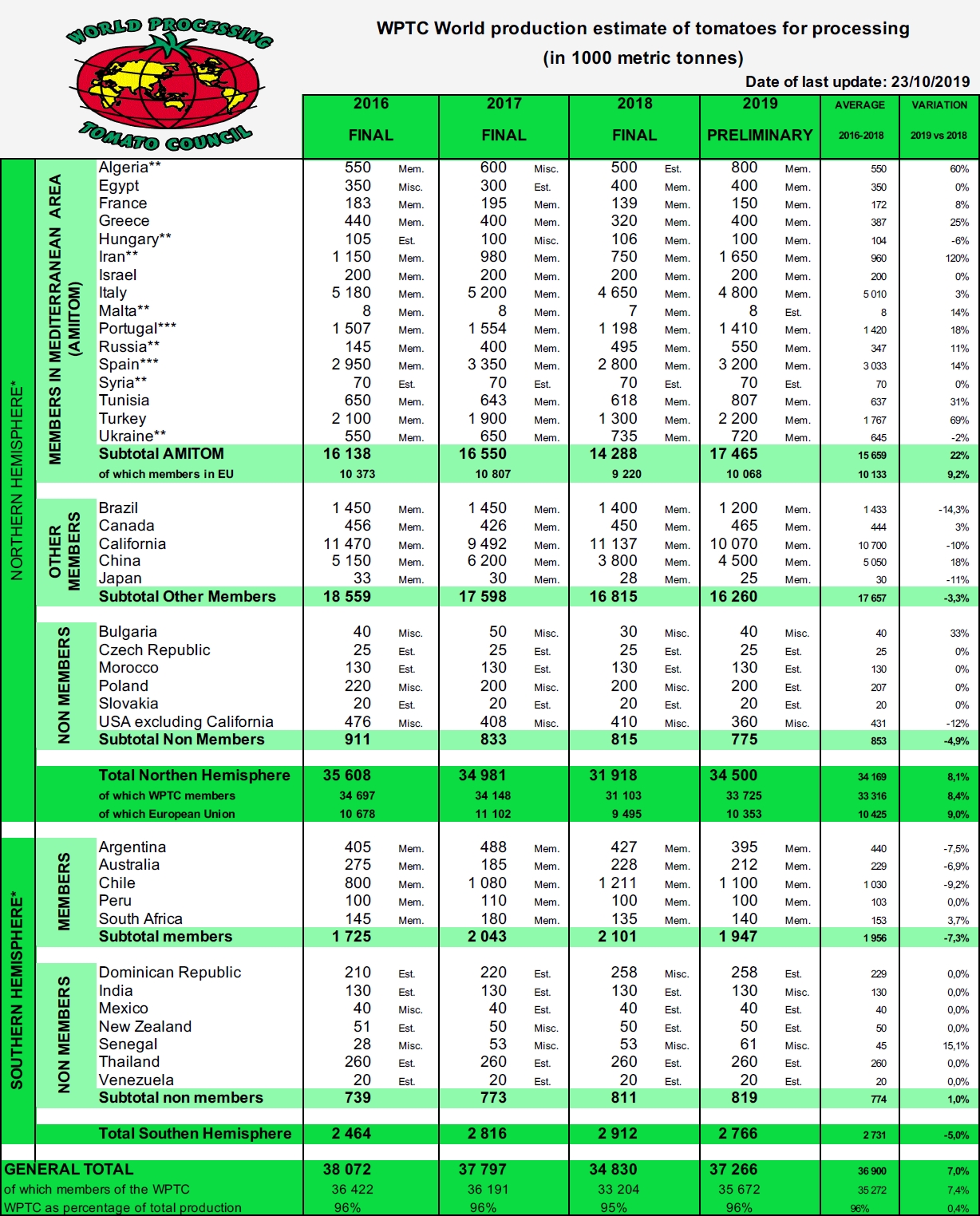 Italy: the processing season comes to an end