05/10/2020 - Sophie Colvine , François-Xavier Branthôme - 2020 Season
The end of the harvest in several countries has made it possible to clarify the provisional results of the 2020 season. As of October 2, the quantities processed on a global scale amount to 38.282 million metric tonnes, down by 1,0 million tonnes compared to initial forecasts. This latest figure however is up 900,000 tonnes compared to the final result for 2019 (37,383 million mT). 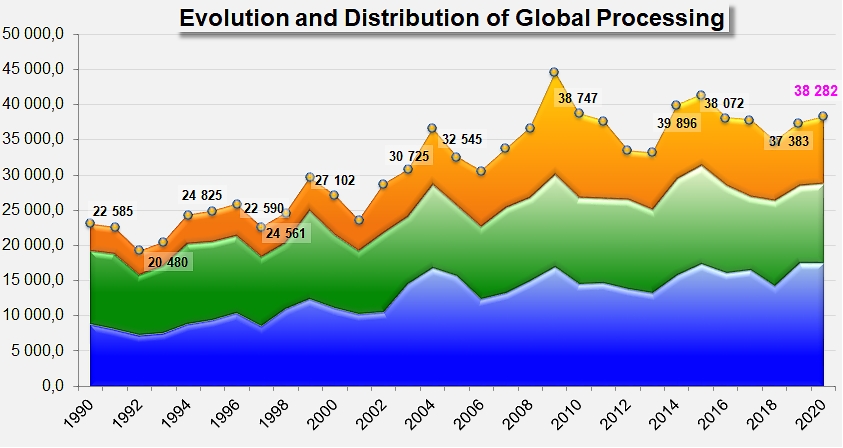 AMITOM countries
In Egypt, the summer crop is coming to an end with factories still at full capacity. The early winter crop will start on 10-15 October with little or no gap between the two seasons. Quality and brix are still good. No change to the forecast.

In France, it rained a lot last week which meant only 3,000 tonnes were processed. While the weather is good this week, more rain is expected at the weekend and next week. This means that some fields may not be harvested. To date, 115,000 tonnes, 75% of the initial forecast of 155,000 tonnes have been processed, with good quality so far and an average brix of 4.83. In the south-west, 20-25,000 tonnes remain in the fields to be harvested until 15 to 25 October depending on weather conditions. In the south-east, only 6-7,000 tonnes remain to be harvested during the next week by the single factory still open. The total volume processed will depend on the volume lost because of the rains but will be between 140,000 and 150,000 tonnes.

In Greece, the season was very good until ten days ago when very heavy rains in the centre of the country caused some damages to cities and factories and the loss of about 10,000 tonnes reducing the forecast to 430,000 tonnes. To date about 98% of the revised estimate has been reached and only small volumes are now processed until all factories close within the next 7 days.

In Hungary, more than 90 % of planted surface has been harvested until now and processing is already stopped. Due to late ripening of certain fields the rest is planned to be processed only next week, if the weather is suitable. Final yearly total quantity will be around 80,000 tonnes in Hungary.

In the North of Italy, the season is nearly over with most factories closed since last weekend and the last three ones processing small volumes this week. As of 20 September, 2.66 million tonnes had been processed with an average brix of 4.82 and 5% price penalties. It rained in the last week so volumes harvested were reduced so the total expectation remain 2.7 million tonnes. Although this is higher than initially forecast, the processing yields are reduced so some of the programs could not be fulfilled (diced, etc.).
In the South of Italy, as of 20 September, 2.31 million tonnes had been processed. Production has continued at reduced volumes since due to rains last weekend and more rain is expected at the weekend and next week. All factories will probably close by next week. The total volume should be about 2.4 million tonnes.
The overall forecast for Italy remains 5.1 million tonnes.

In Portugal, the season is now coming to an end with most factories due to close at the end of this week and only one expected to be operating next week. Yields this season have been variable, averaging about 88-90 t/ha. The total estimate remains close to 1.2 million tonnes but will be confirmed when data has been collected from all companies.

In Spain, all factories are now closed in the Vegas Altas in Extremadura while in Vegas Bajas they are still working but will all close at the end of the weekend. In the North, harvesting will continue until 20 October. The weather is now cool, slowing ripening and there is rain forecast for next week. The season has ben difficult with losses of between 15 and 20% in Extremadura compared to the initial forecast but quality has been good. Estimate remain for a total production of 2.7 million tonnes. In the North, yields are 20% below expectations.

In Russia, to date, 80% of the harvest has been achieved and 440,000 tonnes have been processed with an average brix 4.7. The yields in the first part of September are higher than in August and the average figures now 80 t/ha. We need a few more weeks of summer but the weather, with cold nights and rainy days, doesn’t support us. Factories in Astrakhan and KBR will continue processing till the mid of October with reduced quantities. Altogether, 550,000 tonnes of tomatoes will be processed in Russia during this season.

In Turkey, the crop is pretty much at a close. A few factories are still processing from the Konya Area( Central Region). This area is a spot market growing area with main planting for the fresh market. With the weather holding up this late into the year, which is unusual for Turkey, the quantities processed at the end of our crop have been higher than forecast and consequently the number for Turkey is revised to 2.5 million tonnes.

In Ukraine, the end of September was good with yields around 100 t/ha and an average brix below 5°. Rain started yesterday and will interrupt the harvest for 2-3 days but the weather forecast is good for next week. About 80% of the surface has been harvested to date but it is expected the rain will damage tomatoes remaining in the fields and the forecast is revised from 850,000 tonnes to 800,000 tonnes. 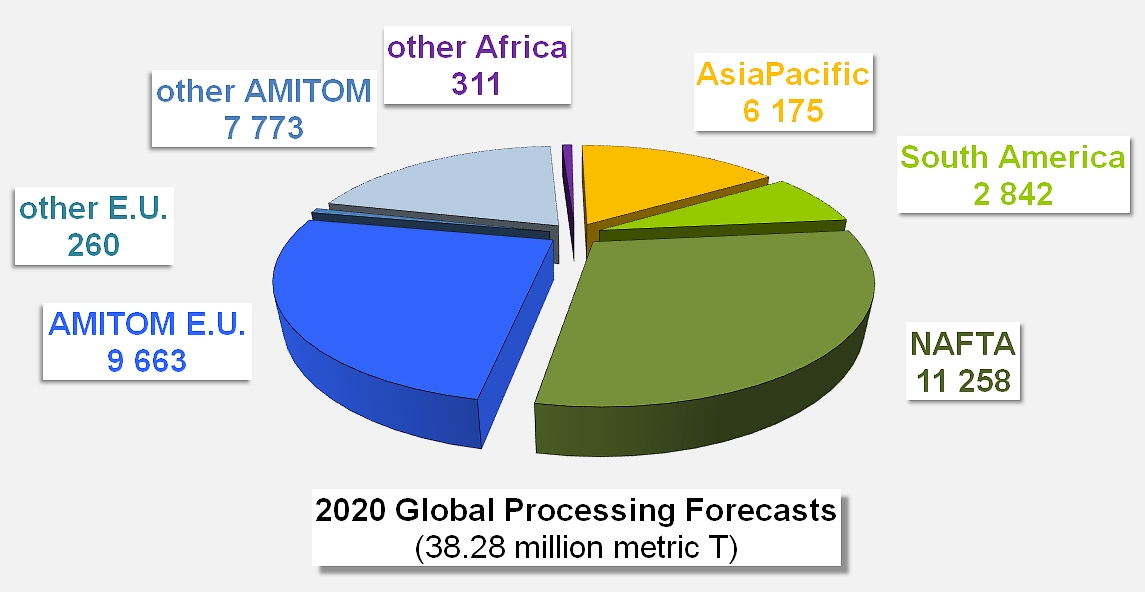 Other northern hemisphere countries
In California, the estimate is to process 676,191 metric tonnes (745,373 short tons) this week. At the end of this week (week ending 3 October) we will have processed 9,674,560 metric tonnes (10,664,378 short tons). The season is nearing completion as some processors have finished and a few more will finish next week. We should see final deliveries at the end of the month. The state should come close to the 10.34 million metric tonnes (11.4 million short tons) estimate.

In Canada, the tomato harvest is approximately 85% complete, with quality remaining good and average yields anticipated. Weather permitting, harvest is set to conclude in early October.

In China, at present, the precipitation is relatively small and the weather is normal. As of September 27, 5.5 million tonnes of processing have been completed, and the production season has entered the final stage.

In the US Midwest, the weather has cooled heading into the fall season. This has slowed ripening as would be expected so the season will be extended somewhat. Dry weather remains in the forecast to help finish out the season at near preseason expectations.

Southern hemisphere countries
In Argentina, it is difficult to import tomato products to fulfil the market demand of about 650,000 tonnes so processors are keen to increase production in 2021. The current plans are to expand the surface planted to around 7,150 ha, bringing the early forecast to 540,000 tonnes (454,000 tonnes were processed in 2020). The tomato price was set in US dollar this year to avoid devaluation risk at abut 75 USD/t field gate with freight paid by processors (average of about 10 USD/t).

In Australia, planting commenced on the 21 September and although conditions have been inclement since planting begun, delays due to wet weather have been minimal. Some frost damage has been reported on young transplants, however casualties appear to be low. At this stage, the long range forecast is for a ‘wetter than average’ spring and summer. The total growing area this season is set at 2,175 ha, with a gross total production volume of 250,000 metric tonnes predicted for the 2020/21 season. Growers are reporting that soil preparation activities have gone well due to a relatively dry finish to winter and first few weeks of spring.

In Chile, transplanting started at the beginning of September but the processors are still working to close contracts with the farmers. At the moment the expected surfaces are in the order of 8,000 ha for Sugal, 4,000 ha for Carozzi and 650 ha for Patagonia/Iansa. Water supply conditions have improved compared to last season, due to better rain conditions in winter. Other conditions seem normal at this time. Chile is totally sold out in tomato paste, with no stock available, and reporting a high demand from export markets. The total forecast for the 2020/21 season currently stands at 1.15 million tonnes (907,000 tonnes were processed in 2020). 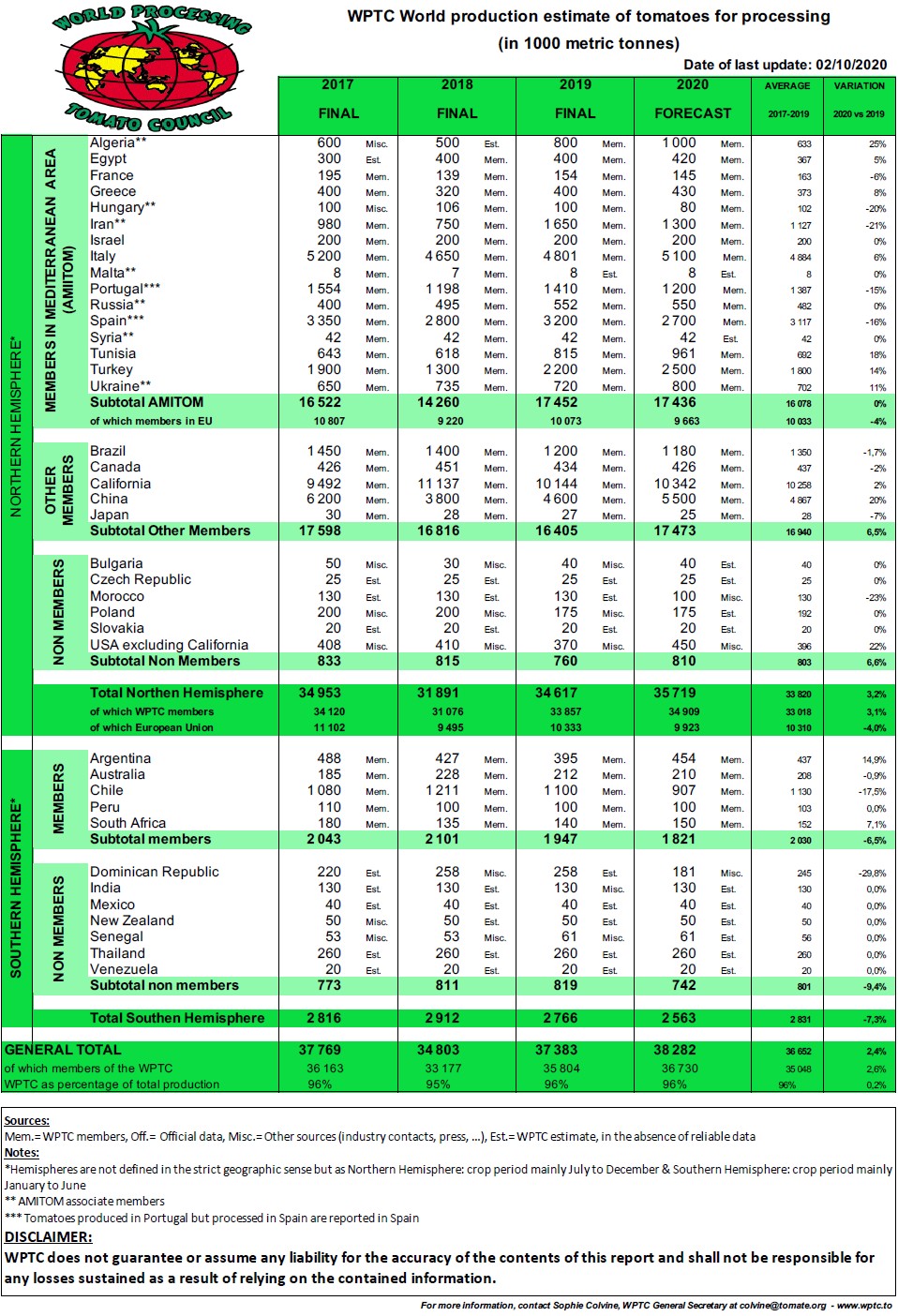