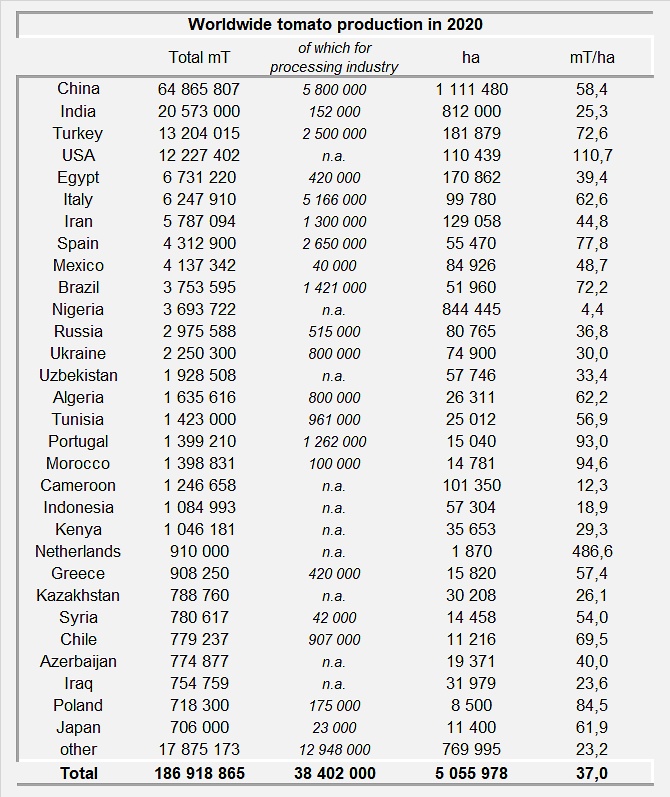 Spain ranks eighth with a total production of 4,312.9 million kilos of tomatoes grown on 55,470 hectares and an average yield of 7.78 kg/m². It should be noted that the Spanish production, number of hectares, and yields, were lower than in the previous year.

EU processing tomato production to remain stable by 2031
According to the latest EU Agricultural Outlook for Markets report, the production of fresh (table) tomatoes is due to decrease by -0.4% per year by 2031. The decline in tomato production is mainly driven by the strong drop in winter production in Spain and a shift to small-sized tomatoes which have a lower volume but higher added value. Spanish producers are also switching to other, more profitable crops in winter due to strong competition from Morocco.
The report covers the EU in its current composition (EU-27) and presents the medium-term outlook for EU agricultural markets, income, and environment to 2031 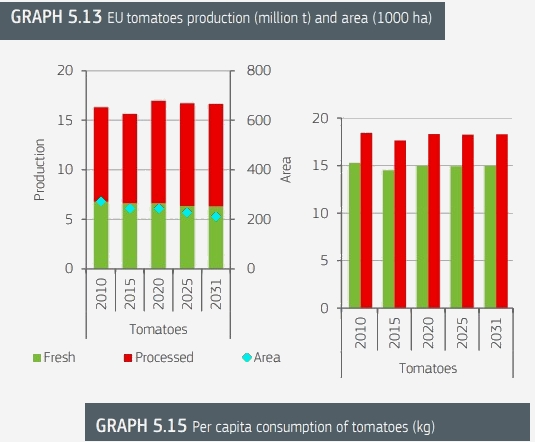 Also, the production of tomatoes for processing is due to remain stable at around 10.4 million tons. The interesting point in the report is that production is shifting from highly concentrated products, such as tomato paste, to less concentrated and higher value-added products such as canned tomatoes, passata, tomato sauces, and organic products (this dynamic has already been the subject of several comments in our previous consumption studies (see related articles below), and we will soon have the opportunity to present the most recent results on this aspect of global activity).

By 2031, the EU consumption of fresh fruit and vegetables is expected to increase, driven by an increasing consumer awareness of the benefits of adopting a diet rich in fruit and vegetables, as well as public initiatives to promote their consumption. However, there are significant differences across sectors and between EU countries.
Despite this favorable environment, the EU per capita consumption of fresh tomatoes is expected to remain stable (15 kg), with an increased consumption of small-sized tomatoes pushing the per capita consumption down while the trend of more ‘snacking’ of tomatoes is due to push demand up.

By 2031, EU exports of fresh tomatoes are expected to stabilize at 390 000 tons respectively (-1.8% per year). Russia, which used to be the largest EU export market and which is still banning the imports of fruit and vegetables from the EU, is increasingly self-sufficient. The export potential into new markets remains limited because of phytosanitary restrictions and increased competition from neighboring countries, in particular for apples.

By 2031, EU imports of fresh tomatoes could continue to increase (+2.7% per year). In the case of fresh tomatoes, the largest volumes currently come from Morocco, but it is expected that the share of imports from Turkey and Tunisia will increase strongly in the outlook period.
Finally, states the EU report, “Despite a strong global demand for processed tomatoes, EU exports expressed in fresh equivalent of raw tomatoes are expected to remain stable. This is the result of growing demand for higher added-value products with a lower concentration. Still, the EU should remain a net importer of concentrate”. We shall also return very soon to this last statement.

Some complementary data:
EU self-sufficiency for fresh and processed tomatoes according to official figures.

Evolution of apparent consumption of processed tomato in the EU according to official figures. 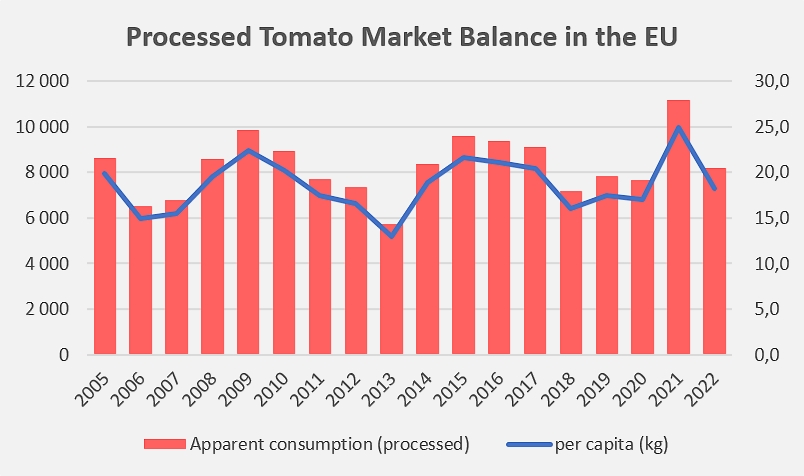