04/10/2022 - Press release , François-Xavier Branthôme
In July Mintec Global Packaging Index declined to the lowest level in 16 months
In July 2022, the Global Packaging Mintec Category Index (MCI) declined to the lowest level in 16 months, down by 7.1% month-on-month (m-o-m) and 12.1% year-on-year (y-o-y) to EUR 1,543/ mT. The index’s movement was primarily driven by the declining price trend in the plastic and metals markets in the EU and US. 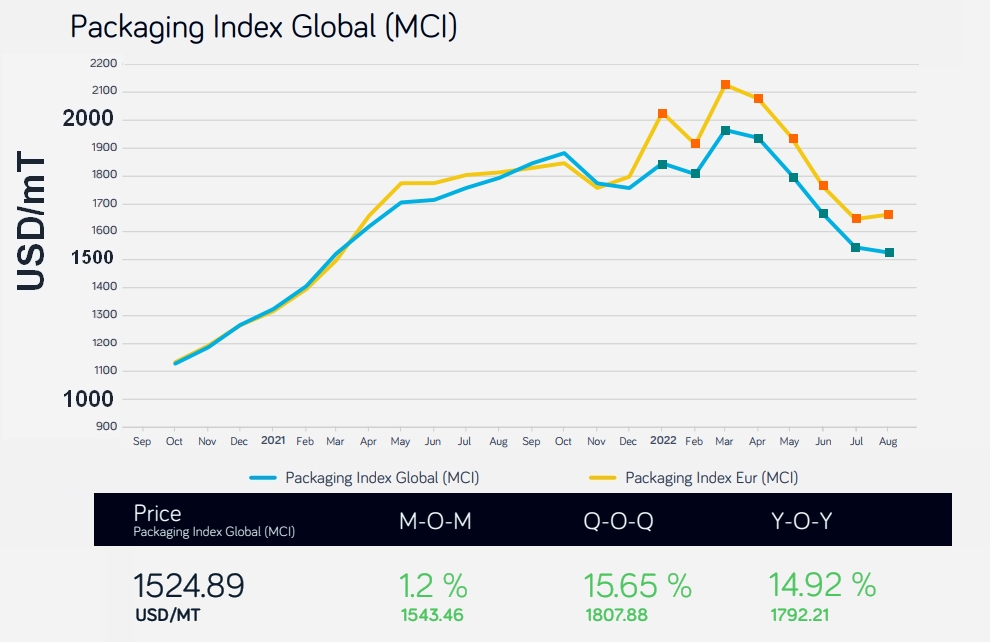 Plastics Market
In the US, prices of all plastic grades fell in July. Similarly, EU plastic prices fell at the end of the month, except for EU PET.
According to market sources, dismal demand and ample supply caused prices in the US plastics market to decline during the month, with producers increasing supply to spur demand. After rising m-o-m in June, US HDPE and LDPE prices fell in July, down by 2.2% m-o-m and 1.9% m-om to USD 2,138/mT and USD 2,579/mT, respectively. Market participants reported a slowdown in purchases after the July 4th holiday and subdued demand in expectations that prices would fall further, supported by recession fears. US PP prices continued a three-month downward trend in July, down by 9.5% m-o-m to USD 2,519/mT, the lowest level since May 2021. The decline was due to sustained weakness in monomer costs. US PET prices declined for the second consecutive month in July, down by 4.7% m-o-m to USD 2,491/mT. This decline was due to weakened demand compared to the previous month. However, prices remained elevated by 44.0% y-o-y on higher demand (compared to the same period in the previous year) and higher feedstock and monomer costs (paraxylene/PTA).
In July, the EU HDPE price declined to a four-month low, down by 5.9% m-o-m to EUR 1,953/mT Similarly, the EU LDPE price fell by 6.3% m-o-m to EUR 2,326/mT in the same period. The decline in prices of both plastics was due to continued improvements in supply and weakened demand. The EU PP price fell for the third consecutive month in July to EUR 1,777/mT (-6.9% m-o-m) on sustained weakened demand from downstream sectors and ample supply. On the other hand, after a modest dip in June, EU PET prices increased in July, supported by a pick-up in demand. The EU PET price was recorded at EUR 1,811/mT, up by 1.8% m-o-m and 49.1% y-o-y.

Paper market
The EU paper packaging market prices stayed flat for most of the paper grades in July 2022 due to lessened demand. According to market participants, some paper manufacturers still had good activity levels but were also seeing a slowdown in order call-offs, for example, from the consumer goods industry. The slowdown was due to the summer holiday season but was also driven by changing consumer spending behaviour in the face of rising inflation.

In July, the French kraftliner 175gr price stayed flat m-o-m at EUR 1,060/mT but still up by 18.1% y-o-y. There was an increase in kraftliner production and more imports from the US. According to market participants, demand has started to ease due to seasonality. Overall, the entire market for corrugated case material is no longer as tight as it was a few months ago.

The July price of French testliner 2 stayed flat m-o-m at EUR 950/mT, up 26.7% y-o-y. The yearly price trend was primarily driven by brisk demand from the e-commerce sector and high production costs.

The July price of GD2 increased by 1.3% m-o-m to EUR 1,845/mT, up by 48.8% y-o-y. Also, the July price of EU GC2 increased by 1.1% m-o-m to EUR 1,845/mT, representing a 25.9% increase y-o-y. Both prices increased due to the rising cost of natural gas and logistical challenges (high cancellation rates and scarce rail capacity). A few GD2 and GC2 manufacturers were also keeping an eye on the EU-wide gas-rationing plan to reduce gas consumption and are anticipating the potential temporary production stoppages as a result.

Energy
Nord Stream 1 pipeline gas cut drives further supply concerns across Europe
Since the Russia-Ukraine conflict started in February this year, natural gas prices soared on the back of high market uncertainty with supply concerns as Russia is the top global exporter.
Supply fears have intensified as Russia completely cut gas flows via the Nord stream 1, the main pipeline taking gas from Russia to Germany. This has massively reduced the amount of gas that can be directed to Europe and caused further market uncertainty. The price of natural gas reached GBP 594.4/100 therm on the 8th of September 2022, up 17.1 % week-on-week and 298.4% y-o-y. Whilst some countries across Europe are not as dependent on Russian gas supply to meet domestic demand, the increasing interconnection of the European gas market means that the majority of the European markets are positively correlated, and therefore prices rose across all markets.
Supplies via the Nord stream 1 pipeline were initially limited to just 20% of full capacity. In response, the EU set out emergency plans on the 20th of July requesting countries to voluntarily cut their gas use by 15% compared to average levels until March 2023. This has helped accelerate buffer stocks, with Europe’s underground storage caverns surpassing 80% at the end of August, above the initial target (according to data from Gas Infrastructure Europe). When winter arrives and heating demand rises, countries will draw from these reserves, helping offset some of the reduced supplies from Russia.
Soaring energy prices have also led to a worsening economic outlook and fears of a recession are now weighing on demand. Across the global market, high fuel prices, inflation, and slowing economic activity could lead to a decline in demand.