According to official statistics released by the Chinese customs services, exports of tomato products under HS codes 2002090 amounted last year (July 2020-June 2021) to just under 873,800 metric tonnes (mT), a performance practically identical (-4,800 mT or -0.5%) to that of the previous year (878,600 mT). Despite a slight slowdown (-23,500 mT or -2.6%) compared to the three previous marketing years, this result nevertheless remains in line with those of the past five years, with a variation of only around -1% over the period as a whole.
It should be noted that, contrary to what has been observed for several other leading countries of the sector, the dynamics of Chinese operations in terms of the monthly rate of shipments have not recorded any notable changes (positive or negative) that could be attributed to the CoVid pandemic (see additional information at the end of this article).
Chinese foreign operations remain mostly focused on an industrial clientele, with a good proportion of products conditioned in packaging of more than 5 kg once again recording steady growth since 2013/2014: in 2020/2021, this sector (20029019) mobilized nearly two-thirds of the quantities, with close on 570,000 mT of finished products shipped. 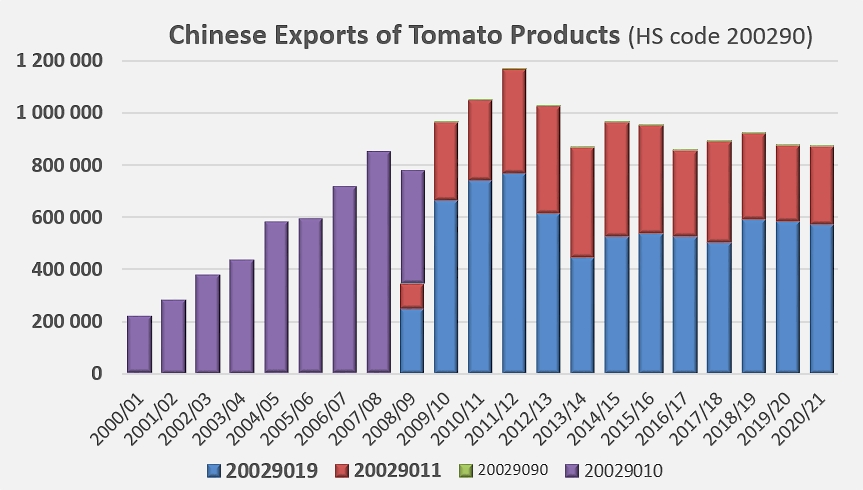 The geographical profile of Chinese foreign trade has changed little in recent years, built around a group of five regions that absorb on annual average more than 80% of the quantities exported under the codes HS200290. West Africa, although remaining the main purchasing region for Chinese exports, has significantly reduced the volume of its imports over the past five or six years: this has been the case in particular for the Nigerian, Ghanaian, Togolese and Beninese markets. Russian purchases (Eurasia), which had amounted to 110,000 mT between 2010 and 2016, have fallen sharply in recent years, increasingly replaced by local crops.
Conversely, over these same periods, Chinese foreign sales increased significantly to the markets of the Philippines, South Korea and Thailand (Far East), as well as to the Yemen and Oman (Middle East), and Italy and Portugal, to name only the main ones. Finally, over the past decade as a whole, sales to the ten other regions (Mediterranean Africa, Eastern and Southern Africa, Eastern EU and other European countries, Indian Peninsula, Asia Pacific, North America, Central and Latin America) suffered a spectacular erosion, which has seen their contribution to total export volumes drop from more than 25% in 2009/2010 to only 10% over the last marketing year (see additional information at the end of this article.) 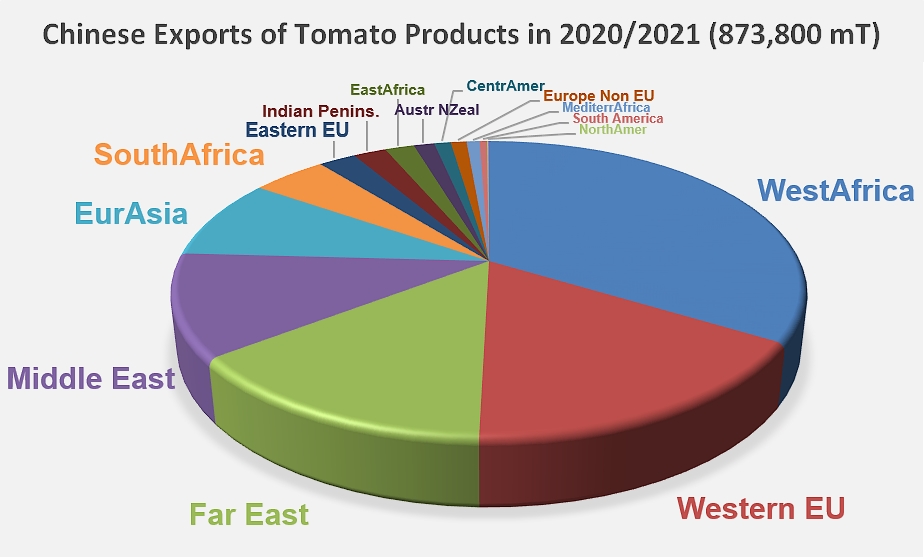 Coldiretti: alarmist statements?
Italy's share of Chinese tomato product exports has recently been the subject of further comment from the Italian Confederation of Farmers. Based on a recent ISTAT report, Coldiretti expressed concern over the threat that Chinese processors pose to Italy's processing tomato production, citing "the 164% (sic) increase in 2021 imports of pastes into Italian territory", which are likely "to represent by the end of the year more than 100,000 tonnes of products, i.e. a volume of around 15% of Italy's production."
In addition to the reminder expressed by Coldiretti (Alessandria) director Roberto Rampazzo concerning the obligation, since February 2018 in Italy, of labeling that states the place of cultivation of the raw material used for products in which tomato is the only or the main ingredient, the president of Coldiretti (Alessandria) Mauro Bianco insisted on "the danger in terms of outlets and image represented by the possible sale on national and foreign markets of products imported under the 'Made in Italy' label," and recalled "the need for careful monitoring of this activity of recovery and repackaging of products, to avoid fraud and deception."

Editor's note: According to official ISTAT statistics compiled by Trade Data Monitor, Italian imports of pastes from China increased from 106,612 tonnes of finished products in 2019/2020 to 122,537 tonnes in 2020/2021. The annual increase amounts to a little less than 15% and only reaches 66% compared to the average quantities mobilized over the three previous marketing years.
At the same time, over the last five years expired (July-June), the Italian sector exported an annual average of more than 726,000 tonnes of tomato paste. The data available at the time of writing (as of 30 May 2021) shows that the 2020/2021 performance could be slightly lower compared to that of the previous year (802,000 tonnes) but should very probably be between 750,000 and 800,000 tonnes. 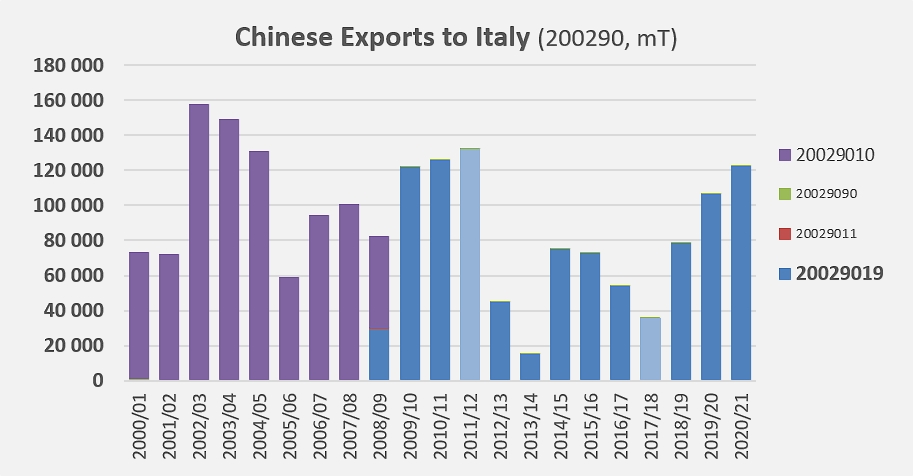 A comparative analysis of the detailed performance of the main exporting countries and the demand of the major importing regions for the full marketing year 2020/2021 will be published in our next Yearbook, available early November 2021.
To consult previous issues, click here
To book your copy of the Yearbook 2021, click here

Some additional information:
After a marked decline in the early 2010s, the proportion of exports intended for industrial uses has increased steadily. 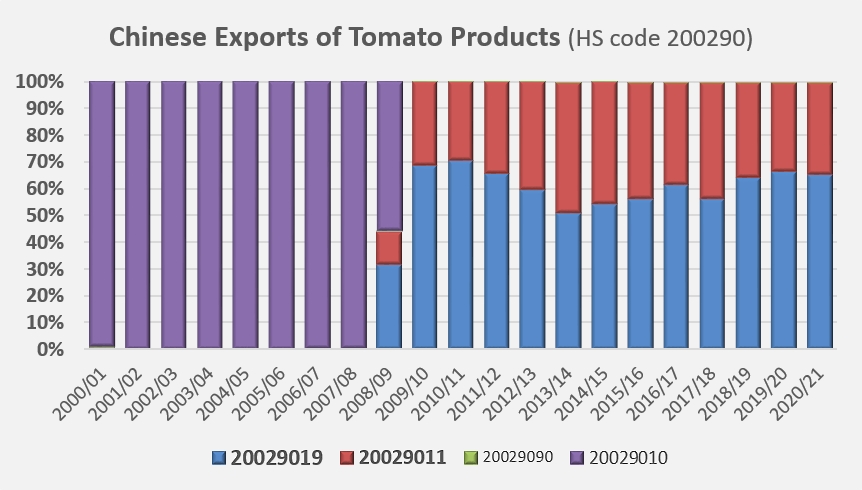 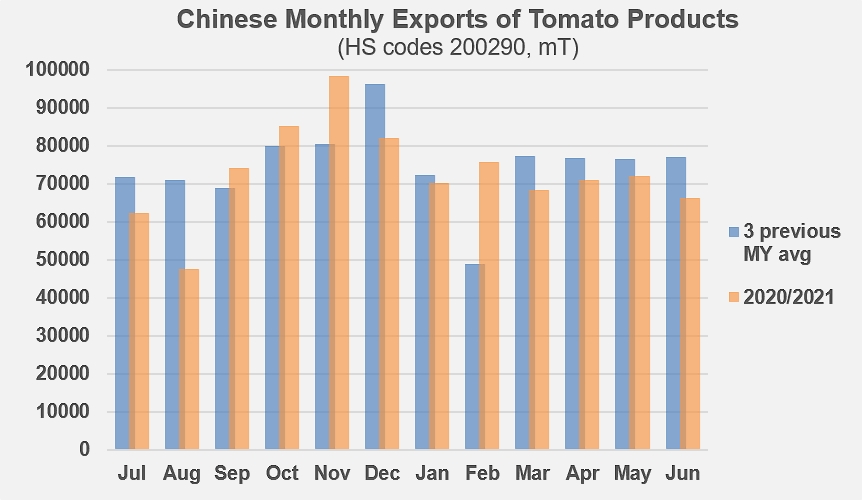 West Africa, the Western European Union, and the Far East are China's main trade partner regions in this sector. 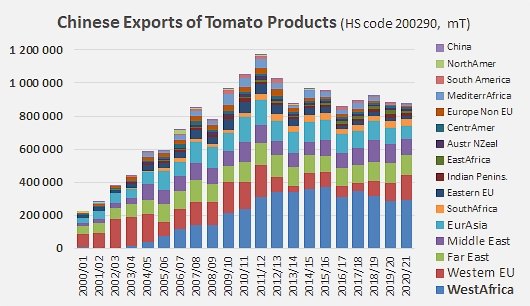 Evolution of Chinese foreign sales (HS codes 200290) by region, over the last 21 years.

China: exports under threat from a possible extension of the boycott