A little over a year ago, our previous analysis of Chilean exports of pastes (see our related articles) was marked by a spectacular increase in foreign trade: from 2018 to 2019, the annual quantities exported under customs codes 20029012 and 20029019 effectively jumped by more than 50% and reached a record level close to 181,000 tonnes (mT).
2020 took more or less the same direction, bringing volumes to around 175,000 mT, which was a slight decrease of 3% compared to 2019. The result for the past year, however, has maintained the level of trade at nearly 36,000 mT above the average export level of the previous three years (just over 139,000 mT over the period running 2017-2019). 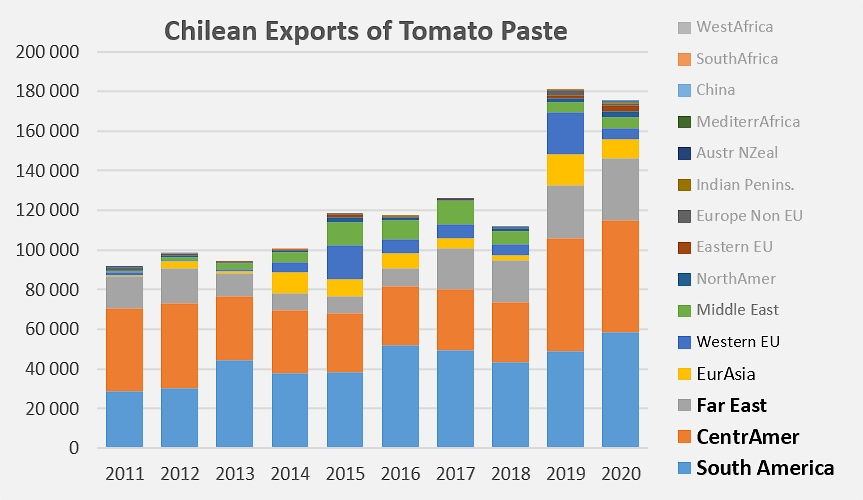 Although the relative proportion of Chilean foreign trade accounted for by the Central and South American regions has tended to decrease in recent years, the future of paste exports from Chile still appears to mainly depend on buyers from these regions (that are geographically close) and, to a lesser extent, on the markets of the Far East. These three major outlets, which together accounted for 94% of Chilean exports in 2010, absorbed "only" 84% of business last year. However, with the strong momentum of recent years, the volumes delivered to these markets have increased from less than 87,000 mT per year ten years ago to more than 146,000 mT in 2020. 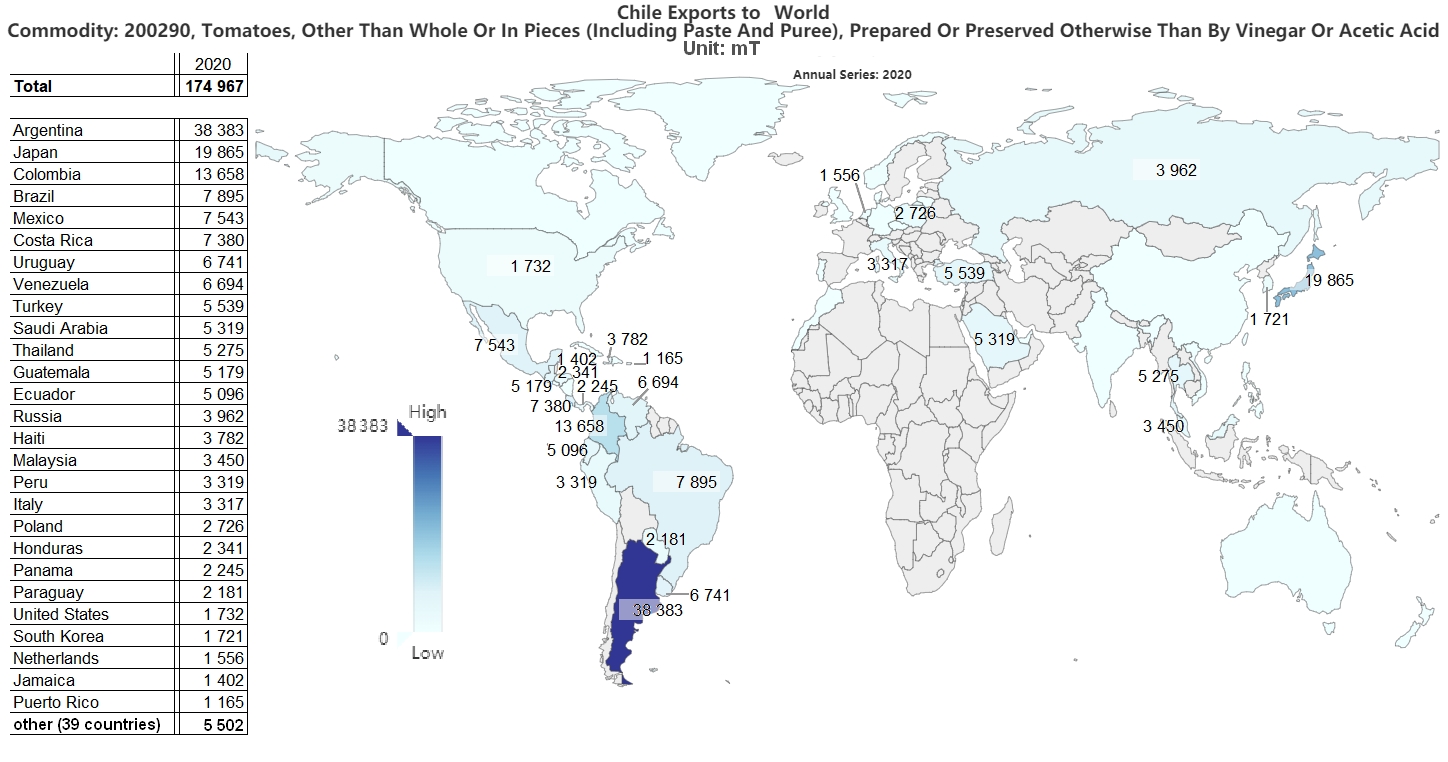 These outlets are also those that have seen the most significant developments: Costa Rican purchases increased last year by more than 5,600 mT compared to the average annual flows for the period running 2017-2019. Colombian purchases increased by 3,600 mT, while Haitian ones increased by more than 3,200 mT. Over the same period, decisive increases were also recorded in the Venezuelan (+2,300 mT), Guatemalan (+2,100 mT), Honduran (+2,000 mT) markets, etc. It is nevertheless important to note the significant drops recorded by Chilean sales in Mexico (-1,600 mT) and Cuba (-1,600 mT). Ultimately, Central American purchases in 2020 remained practically identical to those of the preceding year but were nearly 17,400 mT higher than during the previous three years.

Over the same period and on nearby commercial markets, Chilean exports also recorded good performances on the markets of Argentina (+12,800 mT, due to the poor results of the 2019 campaign in the country) and Uruguay (+1,400 mT), but a notable decline in sales to Brazil (-4,400 mT). Overall, 2020 ended with an increase of 11,300 mT on South American markets.

Finally, mention should be made of the increases in quantities delivered last year to Japan and Malaysia, which respectively increased by 6,400 mT and 3,100 mT compared to the average results for 2017-2019.
Other good results boosted the development of Chilean sales last year, particularly in North America (USA, Puerto Rico) and Poland. However, these increases were offset by significant declines recorded on the Italian, Turkish, Russian German and Saudi markets. 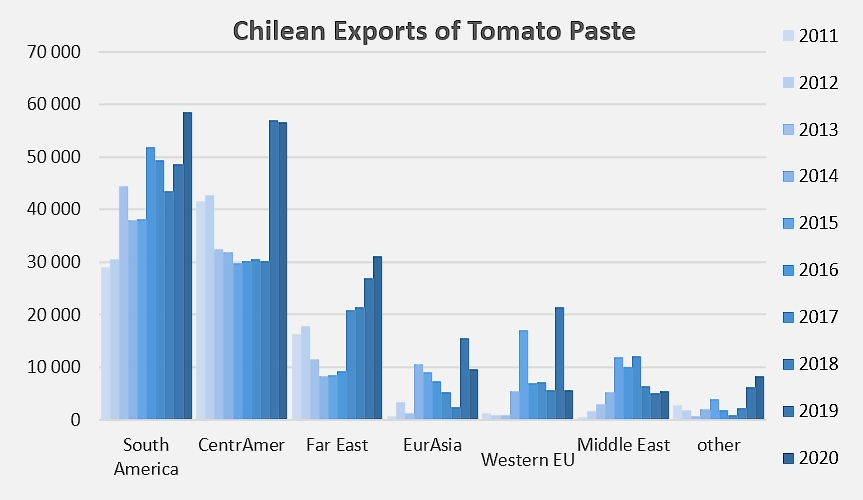 Variations in the exchange rate between the Chilean Peso and the US Dollar during 2020 have been favorable to Chilean products: over the past twelve months, the average rate of the Chilean peso has fallen by 12% against the US currency, thereby improving the competitiveness of Chilean products.
Last year, revenue from Chilean paste exports amounted to more than USD 154 million, up 5% from 2019 but more importantly up 31% from the average for the previous three years (around USD 118 million). The values in Chilean pesos show increases of approximately 19% compared to the 2019 result and 55% compared to the average performance of the three previous years. 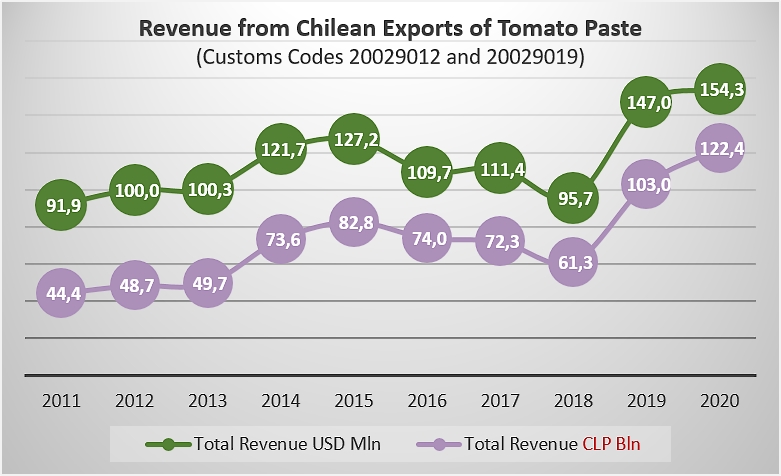