Back from the World Congress...

The 13th World Processing Tomato Congress that ended on 15 June in Athens clearly took note of the cruel paradox that currently best describes our industry: tomato products are officially and demonstrably "super foods", a fact that has been acknowledged by the scientific community if not by lawmakers, but the worldwide processing tomato industry has not communicated sufficiently on that point and the volumes consumed each year around the world are not growing very fast...

(See infographics at the end of this article)

This third consecutive year of decreasing consumption can now clearly be seen as part of a recognized cycle affecting the growth rates of worldwide processing. In his concluding talk at the end of the first session of the 2018 Congress, dedicated to a description of the current and forthcoming circumstances of the worldwide processing industry, Martin Stilwell (Kagome-HIT Portugal) reminded listeners that the structure of this cycle is based on a succession of different phases, including euphoria, denial, consternation, despair and finally, enthusiasm. It is striking to notice to what extent the model described for the period running 2009-2013 (a recurring model over the previous 20 years) once again perfectly fits what has been happening over the past four seasons. However, Martin Stilwell explained that a basic divergence has appeared since the end of 2009 or 2010 between the growth rate of consumption and the growth rate of processing capacity, with spectacular cumulative effects on carryover stocks, including a decisive role played by Chinese production at this stage.
According to this pattern, it is not unthinkable that 2019 could be a potentially "enthusiastic" year and lead to new positive developments. CTGA President Mike Montna seems to at least partly share this opinion, estimating that a season of 35.9 million tonnes around the world would be a big help in bringing back a degree of balance between offer and demand. According to Mike Montna, who also chairs the Information Commission of the World Council, recent weather conditions give reason to believe that in the current circumstances of crops, the final harvest could be slightly below that figure.
When questioned about the long expected recovery of worldwide prices for tomato products, European operators express the fairly widespread opinion that the results of the 2018 season, which are likely to fall short of demand, could contribute to a healthier inventory, but will need to be followed by similar targets and results over the next two or three seasons in order to reasonably escape from the adverse commercial climate that has dominated the worldwide industry for several years.

In general, because Californian operators (both growers and processors) extensively developed their capacity between 2009 and 2014, they feel that a large part of their industry's future depends on the extent to which the drastic reductions in forecasts announced by the Chinese industry are actually followed up by a decrease in production. “The reason we have this excess capacity is because when the dollar was weaker a lot of capacity was put in with the expectation that the situation will continue. And when the dollar started to strengthen, it became more difficult for us to sell, combined with global supply responses in other parts in the world, which made it more difficult to export,” explained Greg Pruett, President of the Ingomar Packaging Company. Pruett feels that US export dynamics depend on how much room for maneuver is left on the worldwide markets by the potential withdrawal of China, and therefore he does not exclude the possibility of future industrial concentration or site closures within the Californian industry. His talk at the Athens Congress also shows that he has taken account of the new and important developments of existing industries, like in Algeria, Brazil, Chile and Argentina. Such progression recorded by several countries can be compared, as indicated by WPTC General Secretary Sophie Colvine, with increasing production observed in Ukraine, Russia, and Hungary (which was newly granted AMITOM associate-membership in June). The professionals that were invited to share their experience of the industry during this recent Congress all agreed on the fact that many of these notable increases in local agricultural and industrial production results are accompanied by protectionist measures that ban the import of pastes and other tomato products, aiming at facilitating national agricultural production and industrial processing operations. 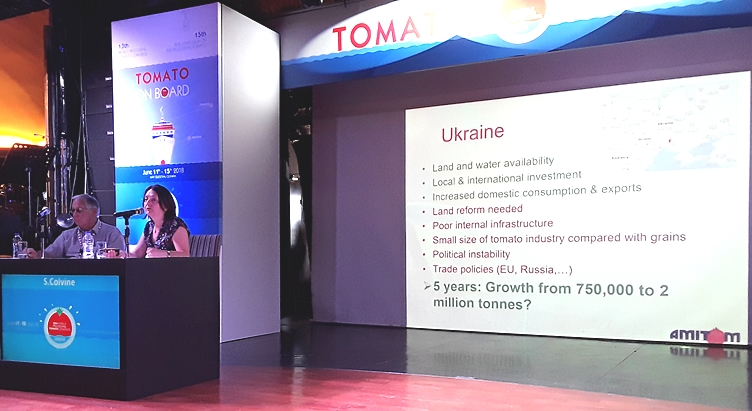 This change of attitude in many importing countries (Russia, Western Europe, Africa) regarding products from abroad, as is now the case with Nigerian, Argentinian or Algerian products, among others, is one of the reasons for the erosion of the dominant position of the Chinese industry on the worldwide paste market. Slower export dynamics, the increasing costs of raw materials along with insufficient agricultural yields, prices that are often incompatible with the generally recognized levels required for minimum profitability, big carryover inventories, and the incapacity to invest in the necessary updating of installations to comply with increasingly stringent environmental regulations – all of these reasons were given by TomatoLand just a few days before the start of the Congress and many were also mentioned by Jiesi Tang, the General director of the China Fuyong Company, in order to explain the interruption of operations for more than half of the production plants of the Chalkis group and the collapse of the industrial and economic model of the Chinese processing sector. 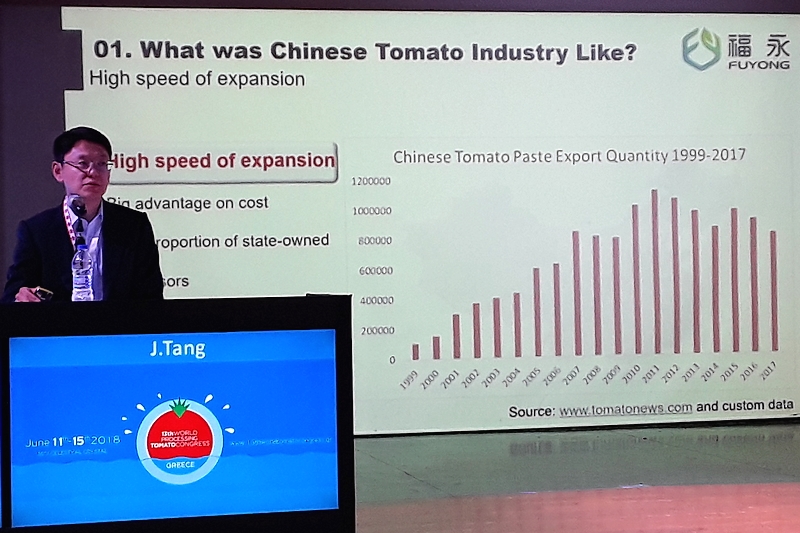 "Now something is happening and it will change our industry: increasing production costs, depressed market for the last four years, and extremely strict regulations of environmental protection" pointed out Jiesi Tang.

The recent deployments described by Marco Baldoli (TomatoEurope, ex-OEIT) in Spain, Portugal, Hungary and Ukraine, by Sophie Colvine in Poland, and by Juan Manuel Mira (Sugal Chile) in Chile are not the least of the paradoxes encountered in our industry. Whereas a number of leading countries are giving up some of their market shares and others are voluntarily reducing their levels of operations in the hope of managing their production to volumes that match as closely as possible the known needs of their markets (while doing their best to increase the value of the services or concepts carried by their products), other countries are extending the surfaces of their crops and intensifying their processing activities in order to maintain an industrial approach that is based uniquely on volume.
Even more noticeable, as pointed out by Greg Pruett, a number of these strategies seem to ignore both the expectations of consumers and the observable changes in the way that products from first-stage processing operations are considered by industrial users and retail distributors. "Tomato paste and sauces are safe, healthy ingredients but most marketers treat them as flavor-neutral additives that need to be value-costed to their minimum levels." Tomato products are undervalued, and also represent an increasingly small proportion of the ingredients in more elaborate products, of which they nonetheless represent the essence, while being frequently replaced by functional substitutes for reasons of cost. So the question must now be asked: "How much tomato can we take out and still call our products "ketchup" or "pasta sauces?"" Whilst underlining the potential impact of this approach on global consumption, Pruett insisted on the ambiguity of the message that is often put out along with the more elaborate products, in complete contradiction with the expressed desires of consumers to be accurately informed and enjoy natural and healthy products. It consists in “taking out one of the most wholesome ingredients when consumers are demanding more transparency and healthy products.” 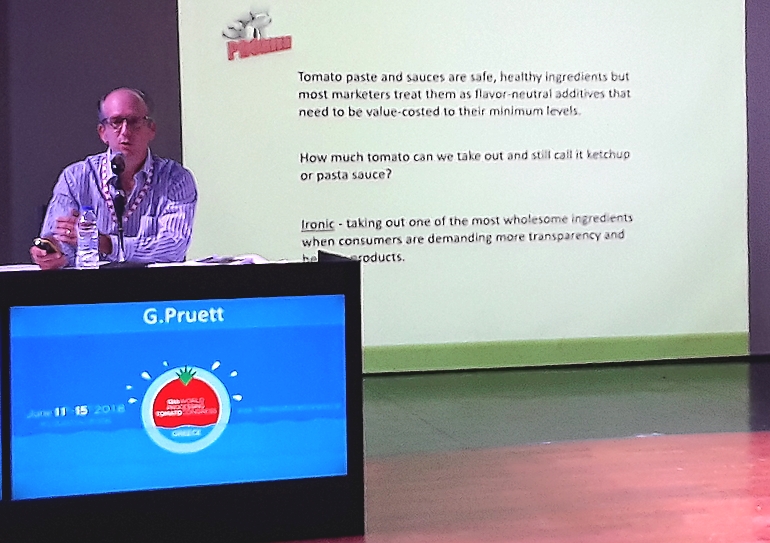 In response to this first session dedicated to an overview of the situation and to future prospects, the Congress successfully endeavored to imagine and define future drivers of development for the worldwide processing tomato industry. Beyond the commercial, economic and political difficulties that were repeatedly mentioned during the presentations, and beyond the uphill struggle of the Tomato Foundation and its president Gwen Young to obtain official recognition of the scientific basis for health claims linked to the advantages of lycopene, Maria Nomikos (head of sales for Nomikos/Copais S.A.) defended a pragmatic approach based on the efforts that need to be made in terms of communication aimed at targets that she identified as the future main outlet groups for consumption over the next 10 years.
“Apparently, our numbers are not that sexy,” explained Maria Nomikos, as she was presenting the compared growth results for the consumption volumes of table-tomatoes (+33%) and processed tomato (+18%) over the past ten years. As head of sales for the Nomikos company, she also reminded listeners of the many advantages of processed tomato, of which the long list officially makes tomato products a "super food" that is perfectly calibrated to answer the original and imaginative expectations of "millennials" (the Generation Y, born between 1980 and 2000), which will account for 60% of the world's population within the next ten years. In her view, the future can be faced without misgivings as long as the industry learns to communicate effectively. 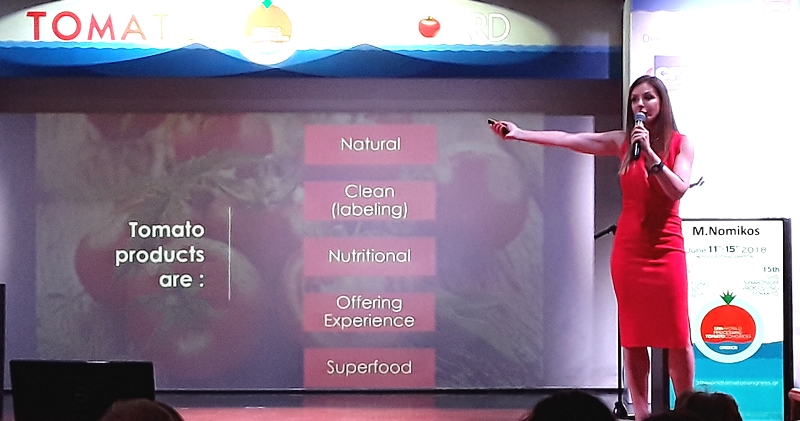 For this Congress, which was held under the banner of "Revival", the conclusion was obvious: “Let’s Create the Tomato Products Success Story”. 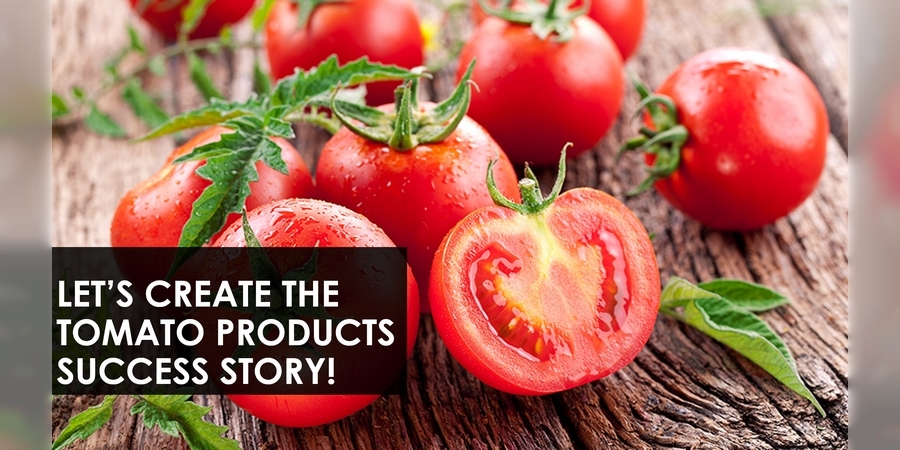 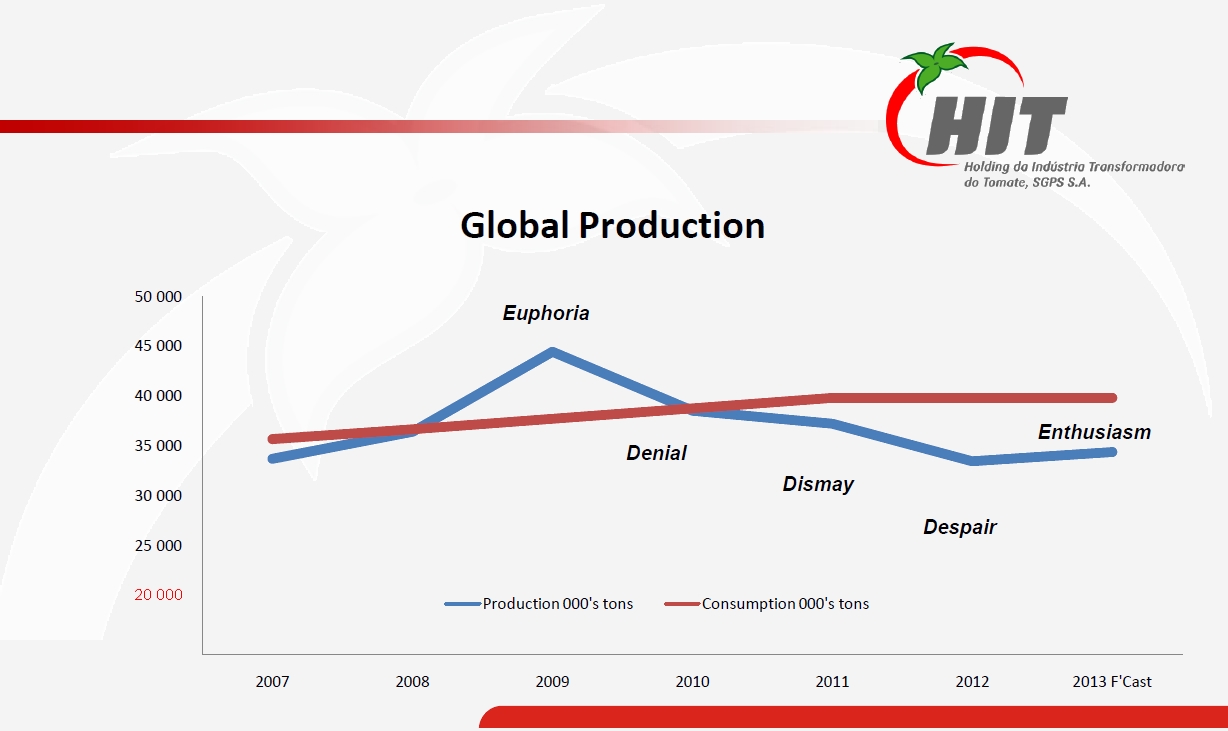 (Taken from the Tomato Forum 2013 presentation by Martin Stilwell)

In the coming weeks, Tomato News will provide further details from several of the presentations given during the 13th World Processing Tomato Congress, including technical topics linked to innovative industrial or agricultural equipment.

11/06/2018 to 15/06/2018 Get the last industry updates, market trends and scientific developments while cruising around the treasures of the Aegean Sea. The 13th World...
See details