14/04/2020 - François-Xavier Branthôme - Consumption , 2020 WPTC congress - Lire en français
This dossier is one of the articles which were originally to be published in the "Processed Tomatoes 2020 Yearbook", which all attendees in the World Congress of Industrial Tomatoes would have received free of charge upon their arrival in San Juan, Argentina.

A slight return to form in 2018/2019...
In an article published in early January on our Tomato News website, detailing the potential development of the consumption of tomato products in India, we highlighted the difficulties of substituting the products of our industry for raw tomatoes in regions where "fresh" consumption is historically and culturally part of local culinary habits. Even when exceptional increases in prices on the fresh market largely justify the use of tomato products, also promoted by public authorities, and even when nutritional, taste and health qualities are widely recognized and promoted, there remains a strong reluctance on behalf of consumers to recognize the equivalence of these modes of consumption in practical terms and to change ingrained habits.

The long-term mission and foundational work undertaken and maintained by many national processing and distribution industries are coming up against the volatility of fashions and are being confronted with apprehensions complacently relayed by the media. The “processing tomato” sector suffers from the imposed prohibition preventing it from effectively and properly capitalizing on health benefits recognized by the scientific community – but not by law-makers – or on the simple natural features of products that have often undergone very little processing. The result is stuttering, hesitant growth, increasingly exposed to the changing concerns of consumers of the new generations X, Y or Z, who are more fond of variety, originality, low environmental impact, freshness and image than of the beneficial antioxidant effects of lycopene...

Today, unlike its cousin the potato, the processing tomato is struggling to gain fans. Paradoxically, according to reports from a number of experts, “growing demand for processed foods, increasing consumer inclination towards vegetarian food and snacks, an expanding food retail industry along with the improving global potato crop over the years, are key factors contributing to the high CAGR of the processing potato market during the forecast period. […] According to the current analysis, the global potato processing market was valued at USD 24.83 billion in 2018 and is expected to reach USD 37.41 billion by year 2026, at a CAGR of 5.2%. The global potato-based consumption is going up due to heavy demand from end-consumers across the globe due to the ease of meal preparations with processed potatoes. […] Potato is considered to be the most favorite food in the diets of various countries. […] Easy availability and low prices drive the demand for this root vegetable. China, Russia, India, and the U.S. are the largest producers and consumers of potatoes and potato-based products, according to the FAO. Europe is the largest per capita consumer of potato products, followed by Asia, North America and Latin America.
[…] Despite the favorable growth scenario, seasonal fluctuations in production in key producing countries, volatility of input prices, and health issues associated with the over-consumption of processed potato foods pose a significant challenge to the growth of this market.” 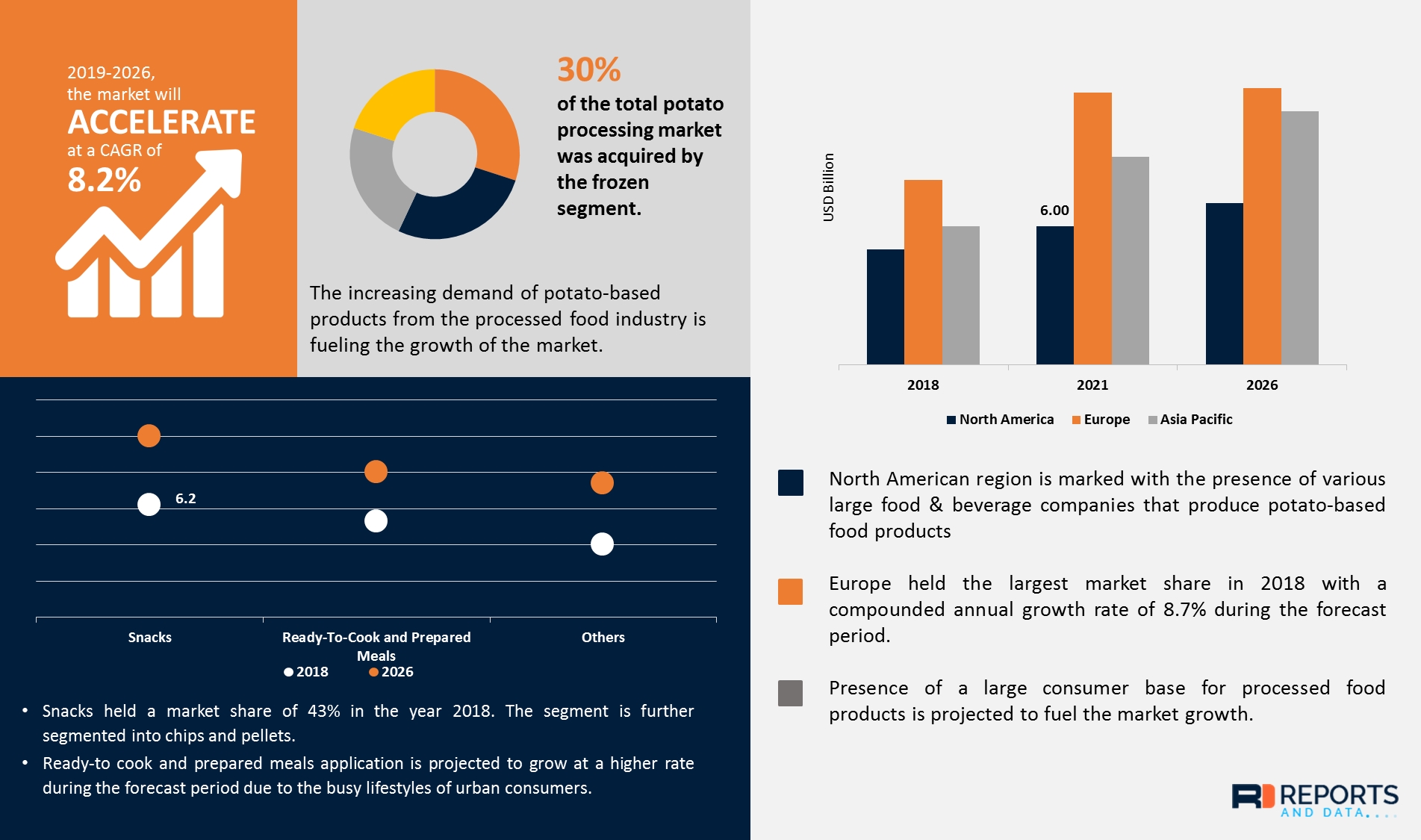 In light of the driving forces of consumption described in this report on potato products, the processed tomato has serious advantages that are likely to broaden its popularity among consumers. Constantly looking to the future after several years of crisis marked by growth that experts have at best described as soft, products of this worldwide industry ended 2018/2019 on a rather encouraging note.

Based on a slight increase in the overall demand for tomato products, expressed in a clear rise in world exports in this sector (see our article on Trends in the World Paste Trade in 2018/2019), consumption of tomato-based products (expressed in raw tomato equivalent) reportedly increased, according to estimates gathered during the latest study commissioned by the World Processing Tomato Council, by around 4% in 2018/2019 compared to the average level of the three previous marketing years. The intensification of trade, observable in particular in the canned tomatoes sector, but also measurable in that of pastes and sauces, has been accompanied by a greater volume of processed raw materials used in export shipments: over the last full marketing year, supply flows from the major processing regions involved the equivalent of approximately 27.3 million metric tonnes (mT) of raw tomatoes, just over 1% more than the three previous years (26.97 million mT). At the same time, overall exports of tomato products, which for the past four years only absorbed just under 69% of the quantities processed annually, attracted in 2018/2019 the equivalent of 78% of the tonnage processed during the season, which is a sign of a closer match between the sector's activity and worldwide demand, and the indication of an increased use of inventories still stocked in factory warehouses in order to satisfy it. 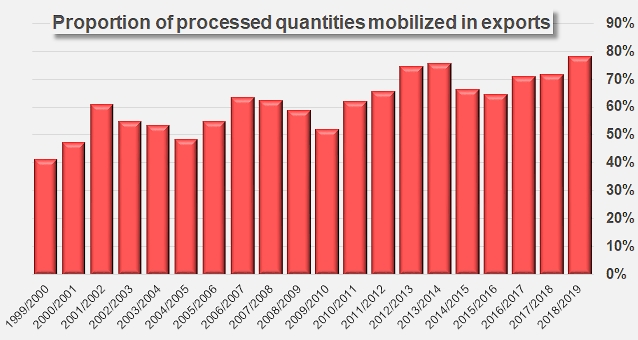 The combination of the dynamics of world trade with the cyclical dynamics of the quantities absorbed by the processing industry led to an almost regular increase in the quantities available for satisfying global demand until 2011/2012. The disorganization caused by the overproduction of 2009 deeply and durably disrupted the reasoned approach to operations during the seasons that followed, and it seems that the response of the agro-industrial sector to global demand started to stabilize only after the 2016/2017 marketing year. At the same time, annual global carryover stocks have entered a significant phase of decrease only in the past three years or so.
The result of these various concomitant phenomena is a world consumption that is still growing but at an annual rate of progression that has gradually decreased in recent years. Without going into further detail, it will suffice to note that this growth rate (CAGR), which reached 3 to 4% per year over the first twelve years of the millennium, has "fallen" to around 1% – sometimes less – during the last eight years. This growth rate, which governs current progression, corresponds to an average increase of around 360 000 mT (raw tomato equivalent) in overall annual consumption. It is within these parameters of growth that companies competing on the globalized market must acquire the market shares essential for their development. 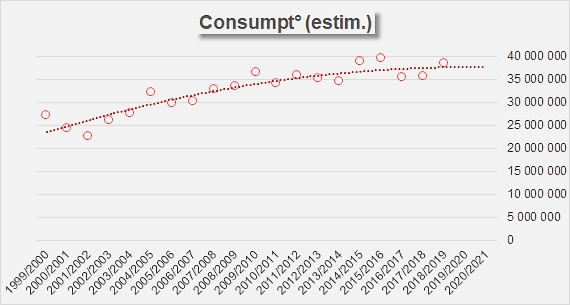 Are emerging markets reaching maturity?
The 2018/2019 marketing year did not bring any decisive changes in the regional components of world consumption. The “historic base” made up of the North American and Western European groups of countries remains by far the main trade outlet for tomato products, although its relative importance in the global landscape continues to decline. In 2018/2019, these two regions together accounted for approximately 44% of world consumption. Twenty years ago, in 1999/2000, the proportion was exactly opposite, the whole of North America-Western EU absorbing 56% of world consumption and the fifteen regions then "emerging" (South America, Eurasia, Far East, etc.) only 44%. In the context of sometimes slow growth that has prevailed over the past twenty years, the rise of emerging regions and their new preeminence highlight a speed of progression that is much higher than in the mature markets of Europe and America.
However, we must beware of generalizing a dynamic that has not been homogeneous, either in time or in space. Consumption data collated according to the model used in the WPTC study reveals what is indeed very rapid growth in consumption in the “emerging regions” until 2011/2012, but this date marked the start of an obvious slowdown in consumption dynamics for these regions. At the same time, the developments observed in the mature markets of Europe and North America have not brought any decisive progress at a global level (even if the past marketing year has seen a significant recovery of domestic consumption in the USA and a continuation of the measured progress recorded in Europe). Nonetheless, it is possible to describe the consumption patterns of tomato products for this group of countries as relatively stable. 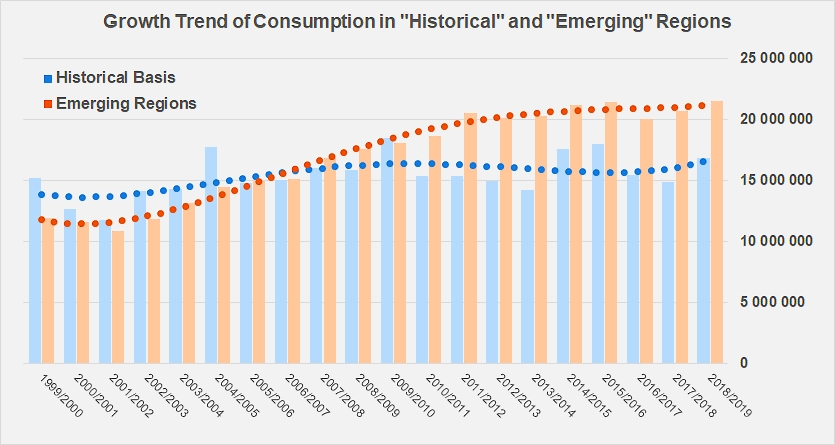 It can be considered that this slower growth in consumption in emerging regions is a sign that these markets are reaching maturity, whether it is the result of an actual slowdown in consumption or simply the reflection of the newly acquired independence of these regions in terms of supplies from the three major processing zones (Europe, United States and China), or even the expression of a significant autonomy in terms of production and processing.
In the same way, it seems to be a given that the fast growth that drove marketing results at the beginning of the millennium on a worldwide level was carried by increases in tomato product consumption in the Middle East, South America, Eurasia, the Far East, and West Africa, to name only the main areas of growth, and that the slowdown in growth in these same regions, in parallel with a sluggish or hesitant dynamic in the "historic" regions, may be one of the causes of the slow progress recorded on a global scale in recent years. 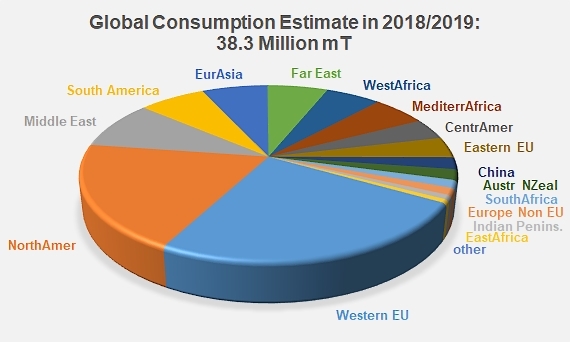 (continued in Part 2 published on 15 April- see link below)