The foundations of the worldwide tomato processing industry have been considerably shaken up over the past thirty years. Among notable changes, the preeminence of the biggest national industries is probably one of the features that have been most profoundly affected by these shifts. Although the countries that make up this group have not varied much over the years, their overall importance in worldwide operations has evolved spectacularly, to the point that over ten years, the group has lost almost all the influence it had built up over the previous twenty years.

From 1989 to 2019, about fifteen countries have featured in this TOP10 list of processing industries. The core group is made up in 2019 of California, Italy, China, Spain, Turkey, Iran, Portugal, Brazil, Chile and Ukraine (based on February's processing intentions). A number of other countries have gravitated around these ten, for varying lengths of time: Tunisia, the Midwestern states of the US, Canada, Argentina and Greece.

The volumes processed each year by the group made up of the ten main national processing industries grew from 18.4 million metric tonnes (mT) in 1989 to 28.98 million mT in 2018. They are expected to reach 31.1 million mT this year. They have been much greater in the past: the TOP10 processed 35.8 million mT in 2015 and reached 38.3 million mT during the record season of 2009. The 2009 season was the peak year for the predominance of the TOP10 in the worldwide industry, at the end of a progression that culminated in the leading countries dealing with close on 89% of the world's total operations that year, having grown from 83% of that total in 1989.
Over the following nine years (ten years, if 2019 prospects are taken into account), the proportion of worldwide production accounted for by the TOP10 has rapidly and sharply decreased, and the volumes planned for the 2019 harvest are expected to confirm this trend by returning the TOP10 group to the level it occupied in 1989 (approximately 83% of global operations). 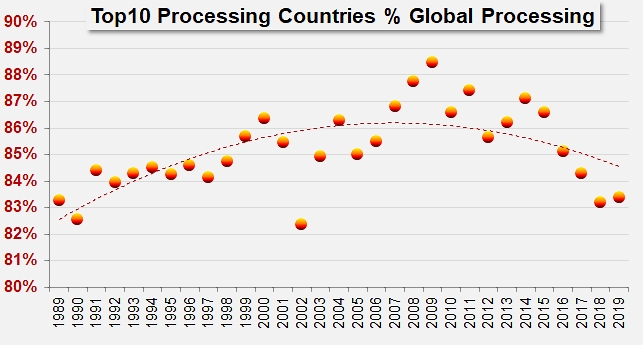 This loss of influence, which is all the more noticeable for the fact that it has occurred in a context of slackening in the level of global operations, is an indirect indication of a slow erosion in demand, of which the impact can be understood by observing the progressive slowdown in the volumes exported around the world, particularly for the TOP10 group. Without going into detail, it is clear that the role of main supplier for worldwide requirements played by the TOP10 is increasingly being challenged, not by the significant emergence of competition from some clearly identified country, but on the one hand, by the development of new technological requirements in terms of remanufacturing (which consume less tomato as raw material than those that drove the growth of the industry until the beginning of the 2000s) and, on the other hand, by the growth of a less focused competition that is mainly based on the development of local processing and supply chains, which have been replacing import trade flows from distant sources.

These two mechanisms, and several other lesser ones, can be considered as part of the reason for the contraction in demand that worldwide processing leaders have been facing. Their overall effect has been a sharp divergence in the growth rate between the volumes processed by the TOP10 group as a whole and those processed by the rest of the world. Over the thirty-year period considered, worldwide processing has grown at an average annual rate of 1.75%. Behind this comfortable growth rate, there are actually several highly contrasted factors to be observed, depending on whether the industry's development is considered before or after 2009, and within or without the TOP10 group.
Between 1989 and 2009, the volumes processed by leading countries of the worldwide industry grew at a rate that is just below 3.9% per year on average, which corresponds approximately to an annual increase in processed volumes of some 1 million mT for that period of time. During those twenty years, the tonnage processed in the rest of the world also increased, but only by 70 000 mT per year, approximately, which is an average annual growth rate of 1.65%. This pattern then accelerated, with the volumes produced in the rest of the world increasing by more than 100 000 mT per year, for an annual growth rate close on 1.9% between 2009 and 2019. Conversely, the processing activity of the TOP10 group declined at the same time by more than 2% per year on average, a shift that has no doubt attenuated the contrast between the different components of the worldwide industry, compared to what it was 10 years ago, assuming that 2019 processing prospects are verified. 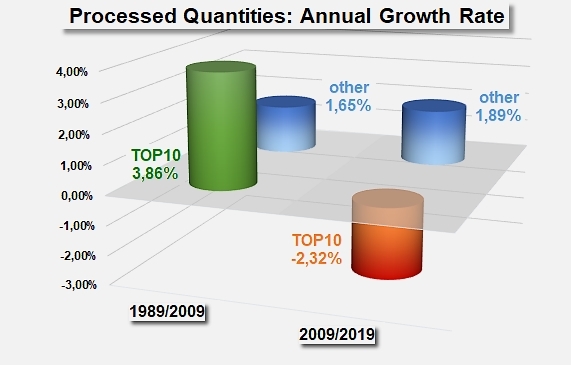 The level of operations of the TOP10 group has decreased over the past ten harvest seasons, while it has increased for the rest of the world.

In the final count, emerging new dynamics in recent years have slightly reduced the gap between the leading countries and the rest of the world's processing industry operators. This lessening of the quantitative dominance of the leading group (independently of the countries that feature in that group) is manifestly not a minor phenomenon or a passing effect of circumstances, and its impact on the worldwide trade flow is considerable. The weakening of the predominance of the TOP10 group has led to a clear contraction of the market outlets being supplied, a feature that will be examined in closer detail in our special report on the architecture of worldwide trade, which will be published in our special issue for complimentary distribution to participants of the Tomato News conference, to be held in Avignon in May. 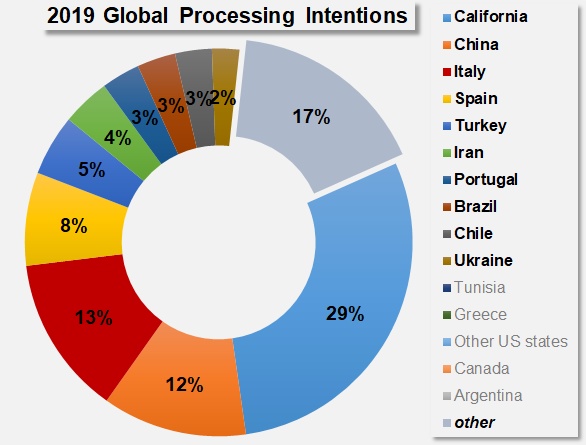