18/02/2019 - Sophie Colvine , François-Xavier Branthôme - 2019 Season - Read in French
Are we finally headed toward a reasonable increase?

Within just a few days of each other, the European Commission published its report on 2018-2030 agricultural prospects for the EU and the WPTC (World Processing Tomato Council) published its first official processing forecasts of the 2019 season. All of the data collected converges, and it confirms, for all of the countries of the EU, an increase in processing intentions by 2020, and even more so by 2025 and 2030 (see complementary information at the end of this article).
As for the shorter-term future, global processing prospects collected at the beginning of February by the WPTC complement those that were supplied during January by the AMITOM, providing a few notable modifications: Iranian processing intentions, which remained to be confirmed, have now been stated at 1.5 million metric tonnes (mT), taking the AMITOM's processing prospects to 16.45 million tonnes.
Forecasts and indications for other countries are presented below.

WPTC: Crop update as of 30 January and 12 February 2019
Northern Hemisphere
In China, it is too early to have information on the area planted in 2019, but according to the current situation, the estimate is for around 4.5 million tonnes to be processed in 2019.

In Iran, the latest estimate is that 750 000 tonnes were processed in 2018. Given the agricultural preparations that have been observed, it is estimated that 1.5 million tonnes of tomatoes will be processed in 2019.

In Turkey, the forecast is still very unclear as negotiations are ongoing. The best forecast remains 1.9 million tonnes.

Southern Hemisphere
In Argentina, a total surface of 5 541 hectares was planted and the latest estimates, temporarily reduced to 400 000 tonnes, have finally been reassessed at around 430 000 tonnes. There were some rains in San Juan but yields are good, at 100 to 120 mT/ha on average.
Harvest started in Mendoza at the end of January. In the North-East of this region, about 400 hectares were affected by hail with different levels of damage in the fields. The situation is satisfactory in the Rio Negro and La Rioja regions. Temperatures are currently high, with high levels of humidity.

In Chile, in the last days of January, one processor started harvesting fields that had been transplanted earlier than usual. The other processors were expected to start during the first week of February. The hot and dry weather conditions are perfect for tomatoes, and a good color is expected. The forecast remains 1.143 million tonnes.

In Peru, weather conditions are good, and the production forecast remains at 100 000 tonnes. 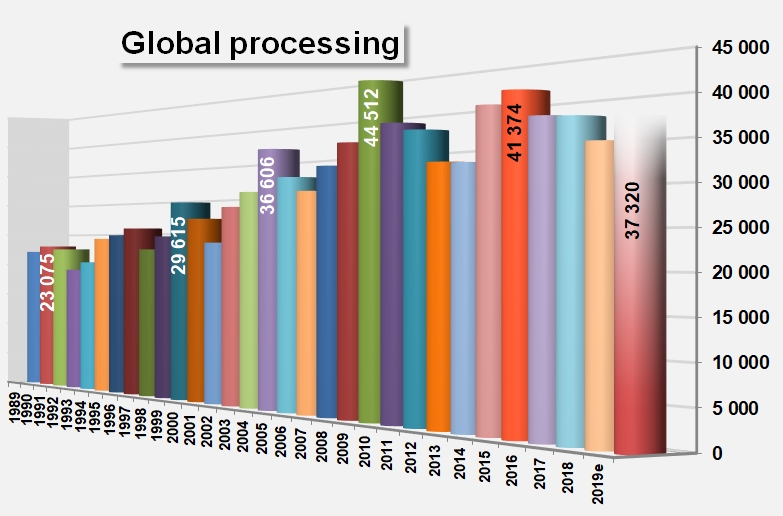 After this early evaluation for the current season, global processing operations are expected to involve approximately 37.32 million tonnes in 2019, which is an increase of slightly more than 7% compared to final results for the previous season (34.830 million mT). This definitive figure for the results of 2018 includes an ultimate review of the Iranian performance, reported at 750 000 mT (instead of the expected 300 000 mT), and a few adjustments in results obtained in Canada (450 000 mT), US states of the Midwest (410 000 mT) and in California (11.137 million mT) (see our distribution of final results for the 2018 season in an appendix at the end of this article).

Processing intentions have been announced for 2019 as being 2.49 million tonnes higher than final processed volumes last year. This increase indicates a certain degree of recovered confidence on the part of industrial operators involved and mainly stems from several factors: an increase in Chinese intentions (+700 000 mT, for a total of 4.5 million mT), intentions of Iranian and Turkish operators to return to the levels they were reaching before the unsatisfactory results of 2017 and 2018, and a relatively modest increase in the processing intentions of several other countries of the Mediterranean region (+300 000 mT in Italy, +142 000 mT in Tunisia, +115 000 mT in Ukraine, etc.). In the final count, projected volumes for AMITOM countries as a whole should be 15% higher (+2.1 million mT) than 2018 results.

This increase in operating prospects around the Mediterranean and as far as the Asia-Pacific region stands in sharp contrast to the planned decreases on the American continent, both north and south. Along with a relatively limited downward adjustment of Canadian operations, it is important to highlight how Californian operators have decided to implement a slight drop (or rather, to concede a slight retreat) in their programs this year. Given the sluggish domestic trade context, Californian intentions seem to take account of the relatively unsatisfactory performance recorded on export markets over the first ten months of 2018, which has confirmed the slowdown observed this past summer at the close of the latest marketing year. With a target of 12.1 million short tonnes (10.977 million mT), the Californian industry is expected to process 160 000 mT less than last year (-1.4%).
In South America, it is Chilean and Brazilian forecasts that have shown something of a slowdown. Chilean forecasts are likely to be 5 to 6% lower (-68 000 mT) than results from the 2018 season, while Brazilian forecasts have recorded a notable decrease of close on 200 000 mT, which represents about -14% compared to last year's performance. 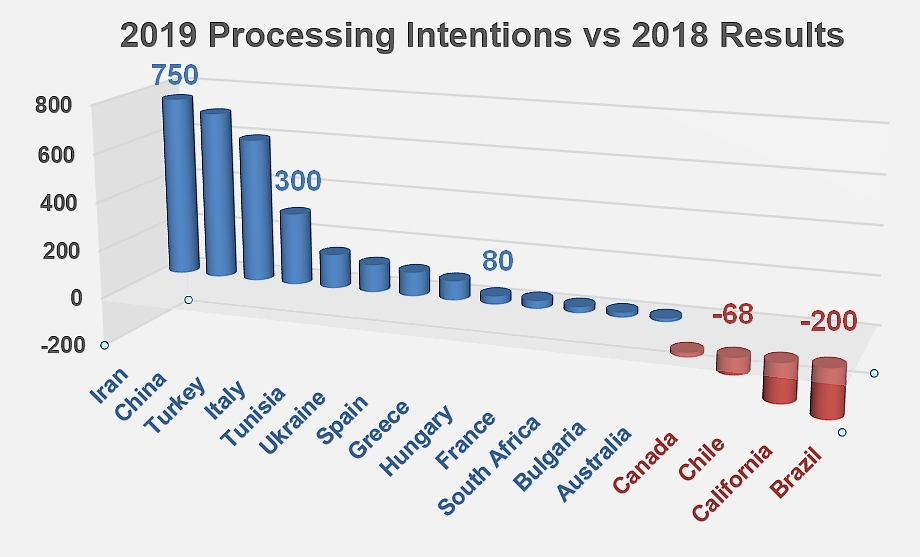 Closer to the strategic concerns of the worldwide industry, the total tonnage that the world's leading supplier countries (the "TOP10") intend to aim at in 2019 amounts to slightly less than 30.7 million mT. This group of countries, which includes China, Italy, Spain, the USA, Portugal, Turkey, Iran, Chile, Ukraine and Greece, processed 28.3 million mT last year. In other words, this group of countries represented 81% of worldwide operations in 2018 (and probably 82% this year) and intends to add approximately 2.4 million tonnes of extra raw tomato to the processing results of the global industry, meaning that it will launch on the world's markets additional tonnage amounting to about 400 000 mT of 28/30 paste. Less than half of this increase will come from countries that are established global exporters. Schematically, the TOP5 should have an extra margin of slightly less than 160 000 mT of paste to shift. As for the five countries whose trade profile is focused on a more restricted geographical sphere, they are expected to generate a bigger inflow, of approximately 240 000 mT of extra product. Presently, the main issue is knowing whether worldwide demand, which was estimated for the 2016/2017 marketing year at slightly less than 37.5 million mT, has sufficiently grown to absorb the extra production from the next season.

In any event, it is increasingly obvious that the 2019 season will represent, barring surprises, the first phase of a new growth cycle in the worldwide processing industry. These recurrent cycles, whose succession has led to an overall increase in processed volumes from 22 million tonnes in 1989 to close on 35 million tonnes in 2018, classically start with an "enthusiastic" season, of which 2019 seems to have all the features after several seasons spent compensating for the excessive production of 2015. This "signal" should already constitute, for the worldwide industry, an invitation to think carefully about the way in which the 2019 harvest can be managed most effectively, as well as how similar care can be implemented for following seasons.

Some complementary data
Processing prospects for 2019 season in AMITOM 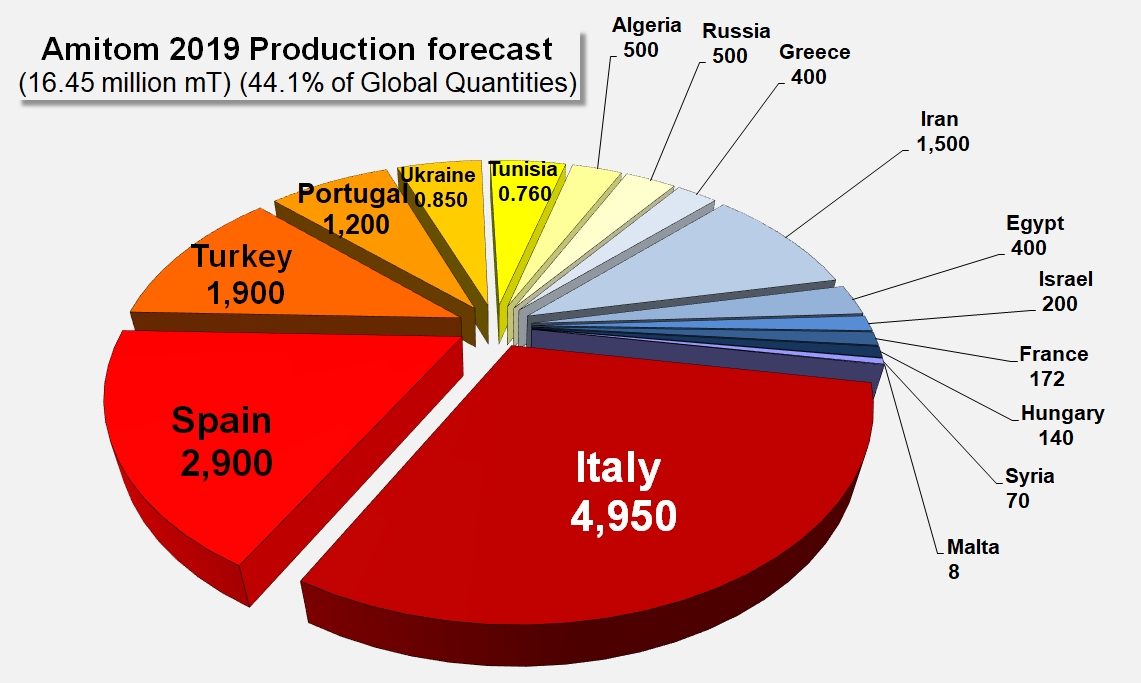 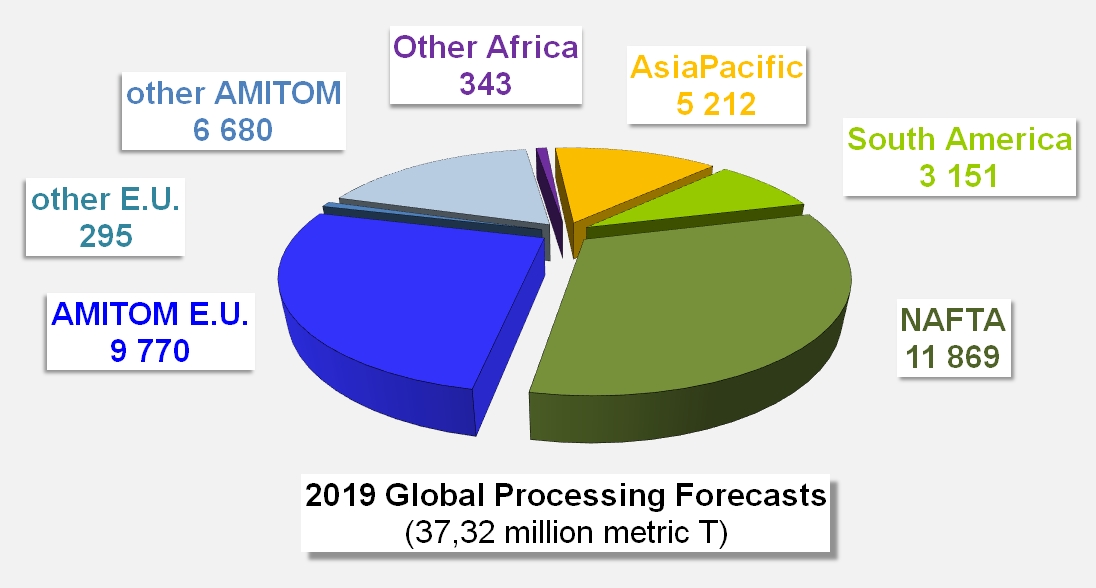 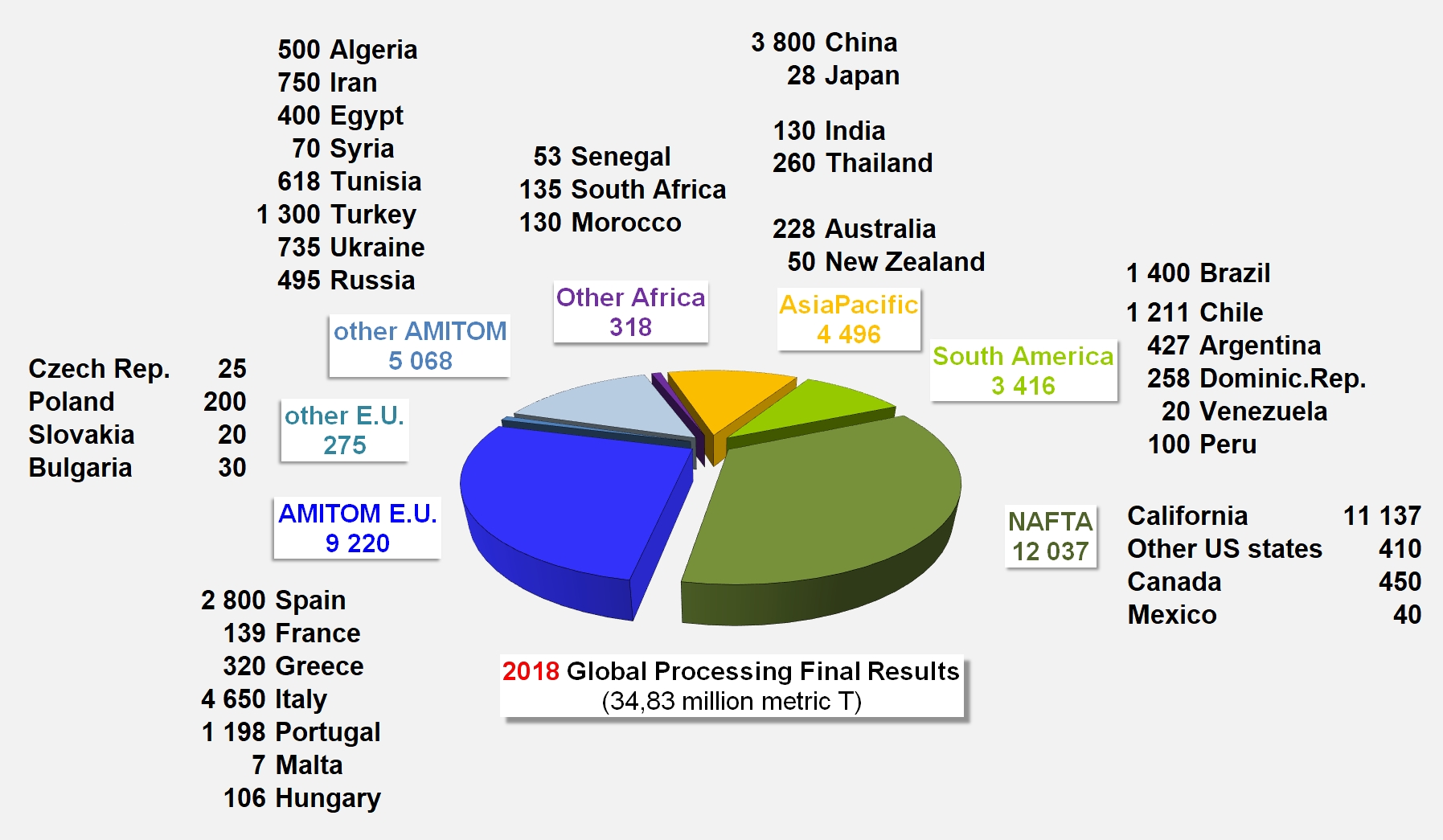 For information, forecasts in terms of production, processing and consumption by the year 2030, published at the beginning of this year by the European Commission. 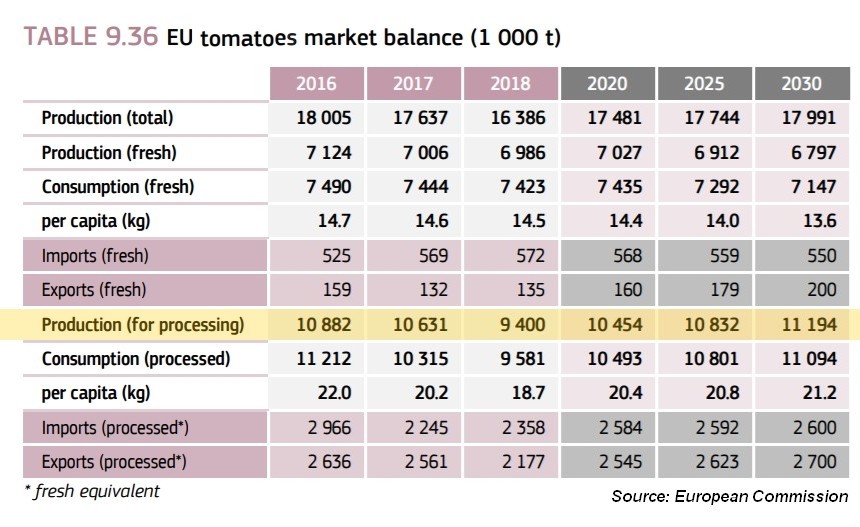