On 8 August, the CTGA (California Tomato Growers Association) announced that it has concluded price negotiations for processing tomatoes with all Californian processors. For ten of them, the reference price (including late-season premiums) has been fixed at USD 75/sT (about USD 83/mT) (see the CTGA bulletin linked to this article).

With this essential piece of information, the data available to date at the global level for the 2019 season indicates a very slightly downward pattern of the overall average price for raw materials (weighted, field gate), compared to the average reference price of 2018. Information is still lacking concerning a number of countries that play a major role in the worldwide industry, but the volumes to which this information refers – slightly more than 27.3 million metric tonnes – nonetheless account for almost three quarters of the current estimates of operations for the season. 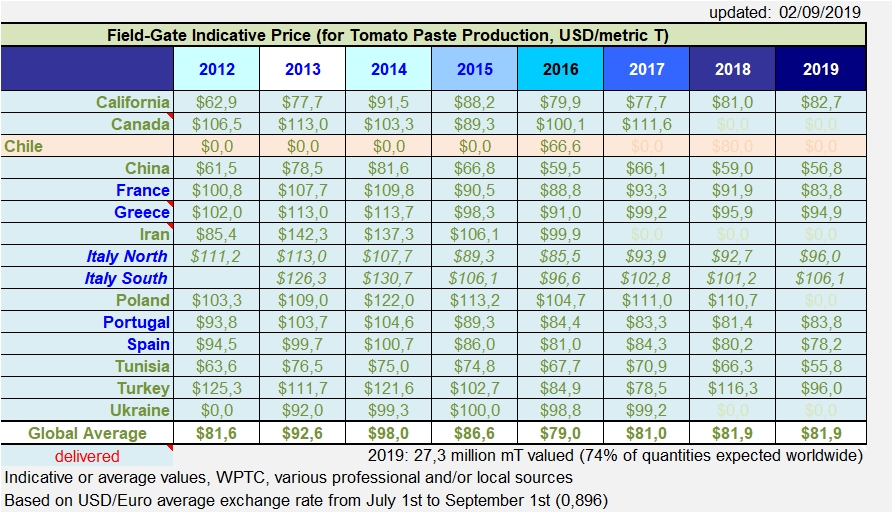 Reference price values do not include premiums for quality or for early or late season harvest, and exclude transport costs and potential deductions.

In several major production areas, like China and in a large part of the Mediterranean rim (Spain, Tunisia, Turkey, etc.), prices for raw tomatoes have dropped to varying degrees; this downward trend is part of an almost generalized approach whereby operators have limited the volumes processed this year, despite the fact that the industry is reporting a notable reduction in carryover stocks. The only major exceptions are the reference price for Californian raw material which increase by about 2%, and Italian one, which is already the highest in the world, and has recorded an increase of 4 to 5% against 2018 prices both in the North and in the South Central region.

Differential between the highest and the lowest annual averages.

2019 price agreement for some California processors