28/11/2019 - François-Xavier Branthôme - Consumption - Read in French
Apps that processors cannot afford to ignore
Increasingly critical and vigilant about the content and quality of products offered to them by the food industry and large retailers, consumers are turning to modern means of information and decision-making when it comes to their buying choices. The influence of traditions and cultures, the weight of teaching and acknowledged prescriptors (doctors, close circle of relations, trend cycles, etc.), the credit given to new gurus and other proponents of improbable but fashionable diets are all diminishing, in favor of new innovative, powerful, easily accessible and user-friendly tools and resources that benefit from the best possible selling point – transparency – in times when the extent of processing and the multiplicity of food items are constantly increasing, leaving the consumer alone with a feeling of helpless ignorance.
Several independent projects, initiated a few years ago, are beginning to emerge in a sustainable way and provide consumers with objective and increasingly intelligible information, and even offer comparative systems of decision support. 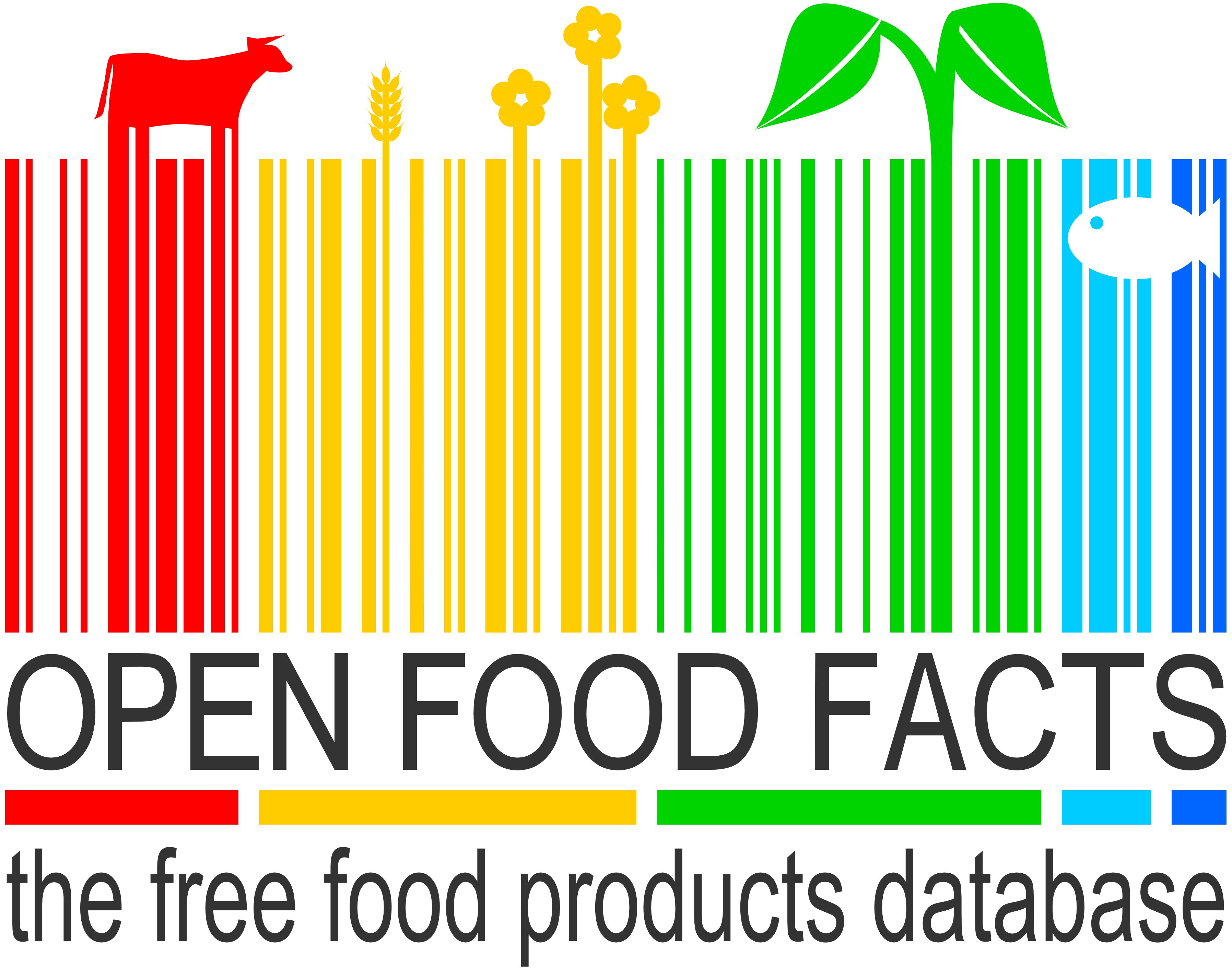 Open Food Facts is one of these new reference tools. It is an online mobile collaborative project that aims to build a free and open database of food products marketed around the world. This informative platform is a unique nutritional database found nowhere else:
• It is international and unlimited in terms of size or number of products. It was conceived in France and now contains more than 700 000 products found in more than 180 countries, of which sixteen feature more than 1 000 products, with eight of them featuring more than 8 000 products.
• It can be used and developed freely (free data), and now can boast of being used by dozens of companies, researchers and inventors.
• It is strictly independent of the food industry, managed by an association governed by the 1901 French law regulating voluntary initiatives.
Launched in May 2012 and with 100 000 users per day, Open Food Facts has already become in just six years the reference for nutritional information in several countries. Each contributor can add and edit food product cards, basing any additions on the data found on packaging. As a result, the GTIN (Global Trade Item Number) encapsulated in the barcode printed on the packaging constitutes the identifier of the food product sheet, which can then be accessed by means of a smartphone application. At the time of writing this article, already more than 8 570 tomato products were referenced for France alone. Worldwide, there are no less than 10 680 tomato products (juices, sauces, ketchup, pastes, peeled, crushed, dried, sliced, cubed, purées, pulped, passata, coulis, tomato frito, pizza topping, products that are natural or flavored, organic or light, in jars, boxes, tubes, carton packs, bottles, etc.) for which the consumer has access in just a few "clicks" to the generic name of the product, as well as to its quantity (weight, volume), its type of packaging (cardboard, deep-frozen, etc.), the brand or brands of the product (main brand and any sub-brands), the product's food category (in order to allow comparisons), the manufacturing or processing sites, the stores and countries where the product is sold, the list of ingredients and any traces (for allergies, dietary restrictions or other specific diets), to food additives it may contain, as well as to other relevant nutritional information.

The consumer app is installed on more than 750 000 phones or tablets. The website and app are used by 100 000 users/day, and 6 million users per year. Open Food Facts data is also published on the official French portal of free data: data.gouv.fr.
One of the main objectives of the platform is to assist consumers in their search for a better diet. Providing easy access to objective and understandable data is part of the mission of Open Food Facts, which unravels the information regarding the E numbers of additives, allergens, packer codes and all the data on the labels.
Nutri-Score: intelligible nutrition labeling
Open Food Facts has gone further over the past three years by supporting the deployment of the Nutri-Score system in 5 European countries.
In France, this system, which is one of the most successful in the field of nutrition labeling at a European level, has been mandatory since 2015 in the case of voluntary "front-of-pack" ("FOP") nutrition labeling. The system is implemented by more than seventy companies, in particular by large retailers, and it was recommended by Open Food Facts even before its official launch.
In Spain and Belgium, Open Food Facts also got in before the official adoption of Nutri-Score in the context of voluntary FOP nutrition labeling implemented by these countries. In Germany, some companies decided to implement Nutri-Score and in September 2019, the government announced its intention to also adopt Nutri-Score as a voluntary system. The European Consumer Organization has also approved Nutri-Score and launched a campaign for its adoption at the European level, although many sectors and segments of the food industry still oppose it. Nonetheless, discussions for its adoption are underway in several other Member States: Austria, the Netherlands, Switzerland, Portugal, Slovenia, etc.
Mandatory on all prepackaged foods, the table of nutritional values is often difficult to decipher for consumers. The energy value of products, fat content, saturated fatty acids, carbohydrates, sugars, proteins and salt per 100 g or 100 ml of product – the information is long and often undecipherable for many consumers. To make it easier to understand, the European regulation allows the insertion of additional nutritional information on packaging.
In order to classify each product, international research teams have developed a unique global score that takes into account, for 100 grams of product, the content in terms of:
• nutrients and foods to promote: the value of the "positive" component P is calculated based on the content of fruit, vegetable and nut ingredients of the food, as well as the vitamins, fiber and proteins it contains.
• nutrients to be limited: the "negative" N component of the score takes into account the nutritional elements (expressed in g per 100 g) whose intake must be limited, such as: energy or caloric density (caloric intake in kJ per 100 g), saturated fatty acids, simple sugars, salt (in g per 100 g).
This nutritional score of a food product is calculated in the same way for all foods, with the exception of cheese, vegetable and animal oils and fats, and beverages. 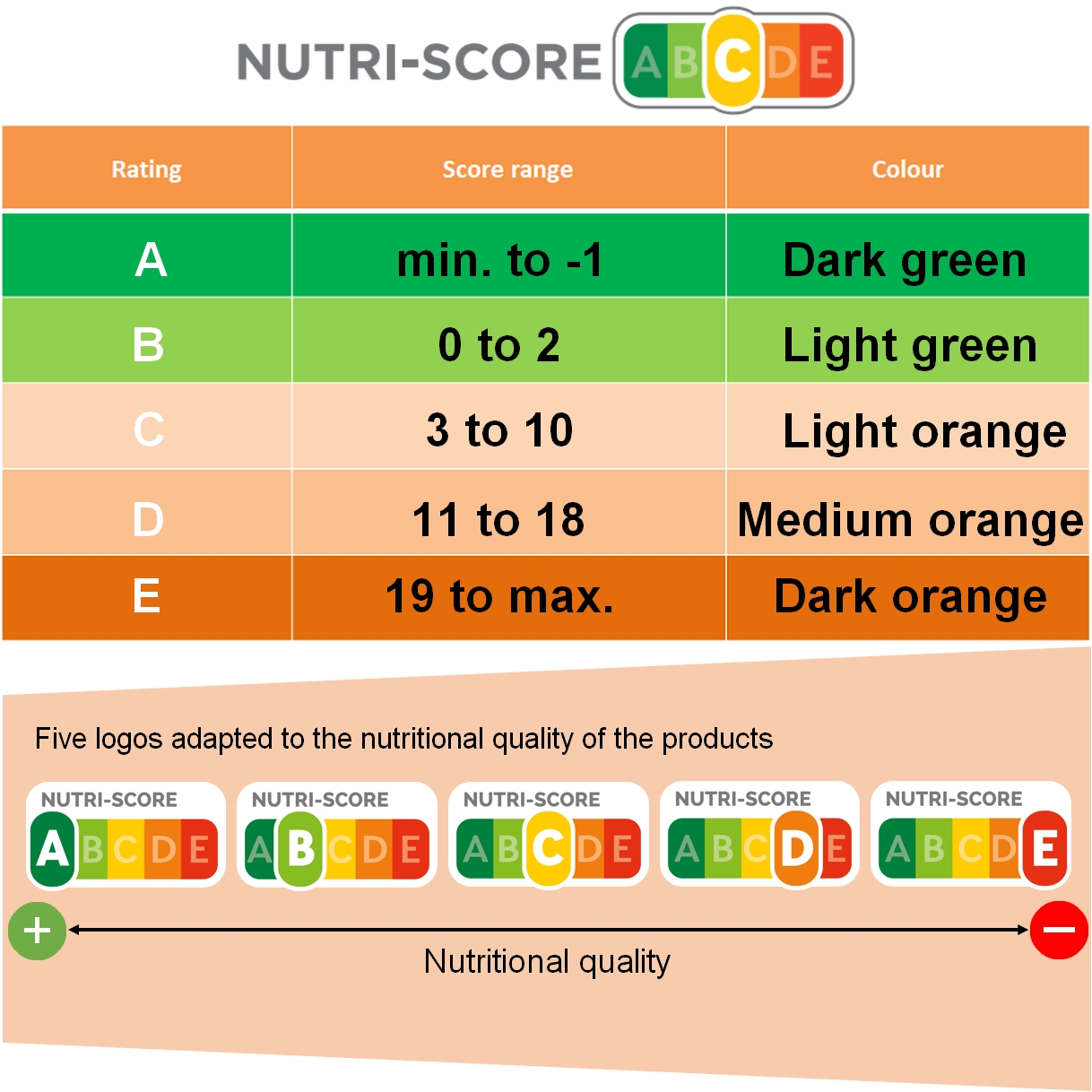 The goal of the Nutri-Score is to help consumers base their choices on objective criteria. Based on the nutrition information and the product category, the Nutri-Score nutritional score is calculated for each product according to a method developed by Professor Serge Hercberg. It gives a synthetic view of the quality of a product from a strictly nutritional point of view (see the example in the appendix). Complementary to the recommendations of nutrition health programs, the Nutri-Score helps consumers to:
• choose between several products of the same family: the different tomato products, for example, can feature a score between A and E. At a glance, the consumer can choose a product with the best nutritional quality from among sauces, peeled tomatoes, favorite purées or coulis, etc.
• compare the nutritional qualities of different brands of the same product: ketchups sold in supermarkets, for example, can be classified in A, B, C or even D according to brands, and the Nutri-Score provides information on possible differences and the advantages of the products of each brand, to guide the consumer towards a reasoned purchase.
NOVA: the issue of ultraprocessed foods
The NOVA Food Group, created by Prof. Carlos Monteiro, has also been featured in every Open Food Facts product sheet since 2018 (see example in the appendix). The NOVA classification allocates food products to four different groups according to the extent to which the raw materials from which they are made have been processed. Starting from the observation that certain diseases such as type-2 diabetes or obesity seem to result from diets centered largely on industrially ultraprocessed foods, epidemiology researchers from the University of São Paulo decided to classify foods according to the extent of their industrial processing, rather than just according to their nutritional properties. The classification was first presented in 2009 and updated in 2016.

The different groups include:
• foods that are unprocessed or have undergone very little processing (edible parts of animals and plants as well as fungi, algae and water) whose nutritional properties have not been inherently altered;
• culinary ingredients obtained through various physical and chemical processing operations (pressing, refining, grinding...) of the foods from the previous group, and likely to contain additives in order to preserve the properties of the original food product;
• processed foods consisting of one or two ingredients that have undergone fairly simple processing, and made from a food of the first group to which a food of the second group has been added in order to improve shelf life, taste or stability.
• Group 4 foods are said to be ultra-processed as they are the result of the recombination or reconstitution of five or more ingredients, as part of a complex industrial processing operation. These foods have the characteristics of being inexpensive, easy to eat, appetizing, but above all, have high contents of added sugars, salt and fat.
Many tomato products are classified as level 3 or 4 according to the Nova classification.
Coming soon, part 2:
Guiding the consumer, influencing the practices of the industrial sectors 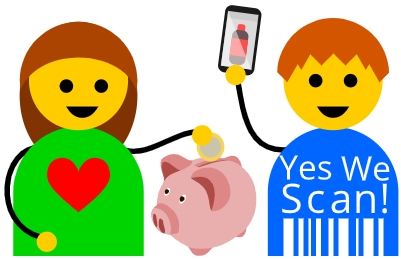