Japan is one of the smallest tomato processing countries. Last season, the Japanese industry processed 23,000 tonnes of fresh tomatoes, a quantity far from sufficient to meet national demand. According to official processing and trade figures, Japan must actually satisfy an annual domestic demand of around 1.1 million tonnes (fresh tomato equivalent), therefore requiring massive imports of tomato products.
Almost all of the tomato products consumed on Japanese territory are therefore imported or result from the remanufacturing of imported industrial products. Last year (2019/2020), these trade-flows involved more than 154,000 tonnes of pastes (finished products), almost 104,000 tonnes of canned tomatoes, just under 7,000 tonnes of sauces & ketchups, and approximately 5,000 tonnes of tomato juice. These quantities make Japan the world's third largest importer of pastes and the fourth largest importer of canned tomatoes. In contrast, Japan is only the world’s twenty-fifth biggest importer of sauces. 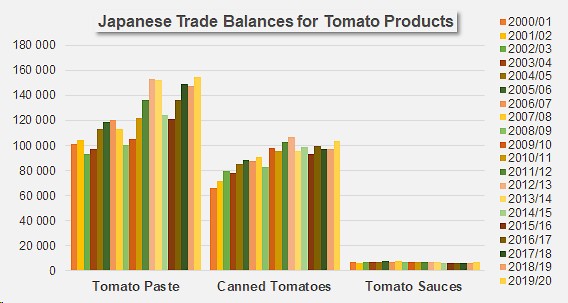 Foreign supplies (trade balance) of pastes over the past year increased by nearly 7% compared to the average of the three previous years (144,000 mT), and by 5% compared to 2018/2019, which mainly benefited Chile, Italy, Ukraine, Spain and Portugal. Conversely, China and to a lesser extent the United States and Turkey recorded significant declines in their deliveries of pastes to Japan.
Over the past three years (2017/2018, 2018/2019 and 2019/2020), Japanese expenditure on paste imports amounted to 18.5 billion Yen (JPY), or just under USD 169 million, accounting for 62% of the total expenditure.

Unlike the trade balance for pastes, the deficit of which seems to be widening more and more each year, Japanese (net) supplies of canned tomatoes have stalled in recent years. Purchases in this sector reached their peak (107,000 mT) in 2012/2013 and since that date have evolved around an annual average of slightly less than 100,000 mT. The quantities imported in 2019/2020 (103,700 mT) by Japan recorded a slight increase compared to these sluggish dynamics, a little over 5,600 mT (5.7%) compared to the average level of the three previous years and 7% compared to 2018/2019. The Italian sector, which holds a 93% share of this market, has benefited greatly from this increase, but it is also important to mention the good performance of US canned products, which have grown significantly in recent years, as well as the performance of products from Turkey.
The annual deficit in Japan's canned tomato products balance has averaged around JPY 10.4 billion (about USD 95 million) on average over the past three years, accounting for about 35% of total expenditure. 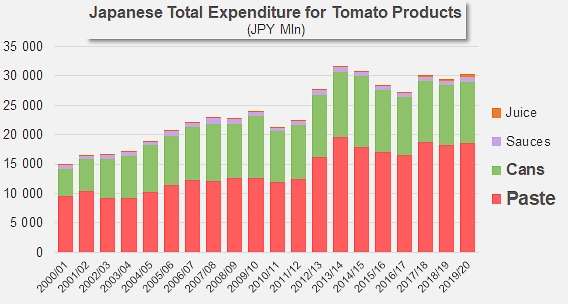 Imports of sauces and ketchup not only represent a minor item in the deficit of the Japanese trade balance for tomato products, but also seem to have slowed down in recent years. Since the maximum (8,200 mT) reached about fifteen years ago, imports of sauces to Japan have gradually decreased to the 6,800 mT supplied in 2019/2020.
The United States and the Netherlands are logically at the top of the countries supplying sauces to Japan. These two countries hold 95% of the market, which has averaged JPY 730 million (or USD 6.6 million) over the last three years.

All in all, half a dozen world-level national industries share the supply shipments to the Japanese market. Italian products, pastes and canned tomatoes, unsurprisingly rank first in this group with, on average over the last three years, a large third (36%) of Japanese expenditure, i.e. an average annual turnover of approximately USD 99 million. Japanese purchases of Italian products mainly include canned tomatoes (85% of the total) and pastes (15%).
The United States record a result about half that of the Italian industry, with an annual average over the period of around USD 47 million, mainly generated by sales of pastes (86% of the total).
Portuguese exports to Japan consist exclusively of pastes, which have brought in around USD 35 million per year over the last three marketing years.
According to the same pattern, Japanese imports of Spanish pastes generated an average annual turnover for this category of around USD 28 million over the period considered, followed by Chilean, Chinese and Turkish products, with sales of between 13 and 20 million USD. 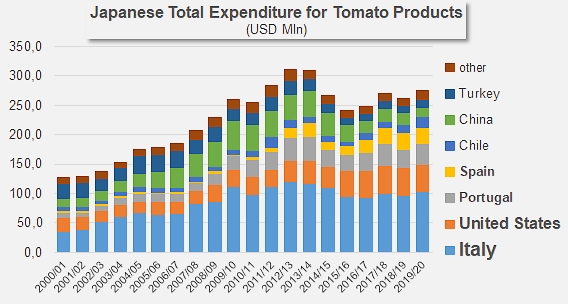 Some additional data:
The evolution of the relative market shares of the main supplier countries of tomato products to Japan shows, in addition to the mostly stable flow of Italian products, a gradual emergence of US, Portuguese and Spanish products, while Chilean products are striving just to maintain a presence and the flow of products of Chinese and Turkish origin is losing ground. 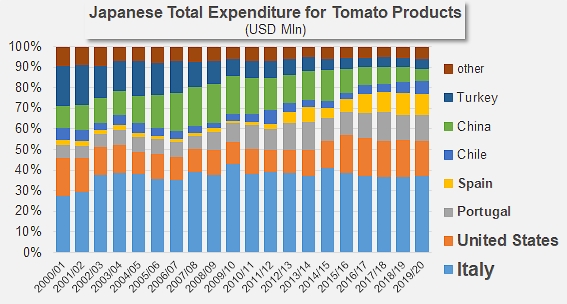 Evolution of the USD/JPY exchange rate since 2011 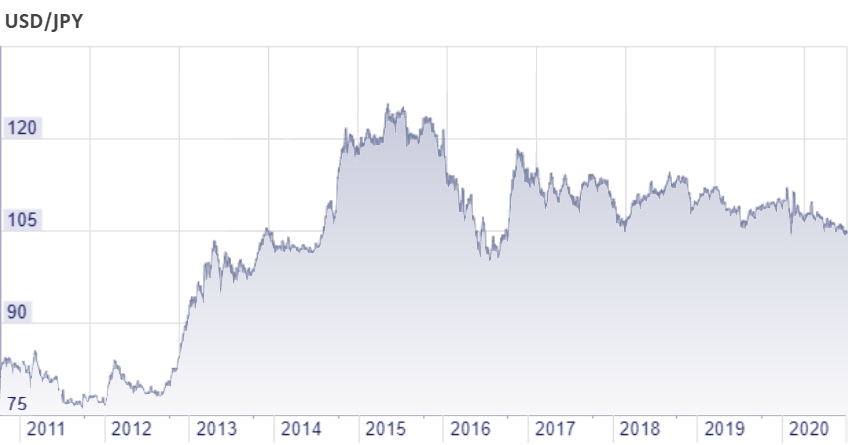