The 2019 calendar year (January-December) will probably be remembered in Italy for its excellent foreign trade results in the tomato products sector: exports increased considerably, over all categories of products, to the extent that they absorbed 6% more raw materials than the average of the previous three years and generated an increase in revenue of almost 10% compared to average sales over the same period.

Amounting to almost 707 000 metric tonnes (mT) of finished products per year over the period running 2016-2018, Italian exports of pastes climbed above 753 000 mT in 2019, an increase of more than 6.5%. Almost half of this progression of nearly 46 400 mT comes from an increase in sales to member countries of the western EU (+22 000 mT, in particular to Germany, France, Austria, Ireland and the Netherlands), and one fifth comes from the growth of sales to eastern EU countries (around 9 500 mT, in particular to Poland, Croatia and Hungary). To a lesser extent, purchases also increased for a number of other countries (Australia, USA, Canada, Switzerland), which helped offset the small number of decreases recorded for shipments to Libya, Angola or Senegal.
In 2019, the total value of products exported to the paste sector amounted to nearly EUR 673 million, up 4.8% on the average turnover of the three previous years (EUR 642 million on average annually over the period running 2016-2018). Paste exports were the second biggest profit item for Italy’s foreign trade in tomato products in 2019. 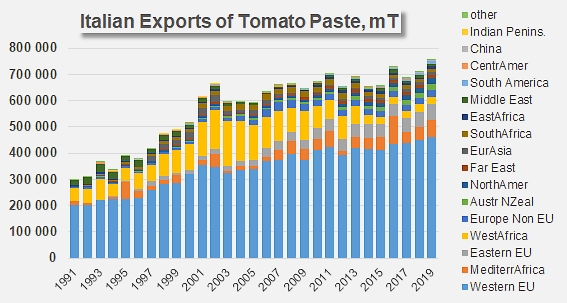 The canned tomatoes category, a virtual preserve of Italian operators, recorded a similar increase in foreign sales: the quantities exported in 2019 set a new record, at 1.432 million mT of finished products, up more than 88 500 mT (+6.5%) on the average performance of the previous three years (1.343 million mT over the period running 2016-2018).
The most significant developments were recorded within the EU, with a gain of 66 000 mT compared to the 2016-2018 period, mainly driven by higher demand in the United Kingdom, France, Germany, Austria, Sweden, Poland, Romania, etc. North American purchases (USA and Canada) also increased last year (+14 000 mT), as did sales to the Russian, Israeli and UAE markets. Italian trade did also record some drops in volume (Norway, Australia, Angola, Belgium, Luxembourg), which remained practically negligible in terms of effect insofar as the most important of these decreases did not exceed 2 500 mT of finished products.
The turnover from Italian canned tomato exports amounted to more than EUR 994 million in 2019, i.e. EUR 88 million and almost 10% more than the average over the previous three years (EUR 906 million annually). This is the biggest profit item in the Italian export sector. 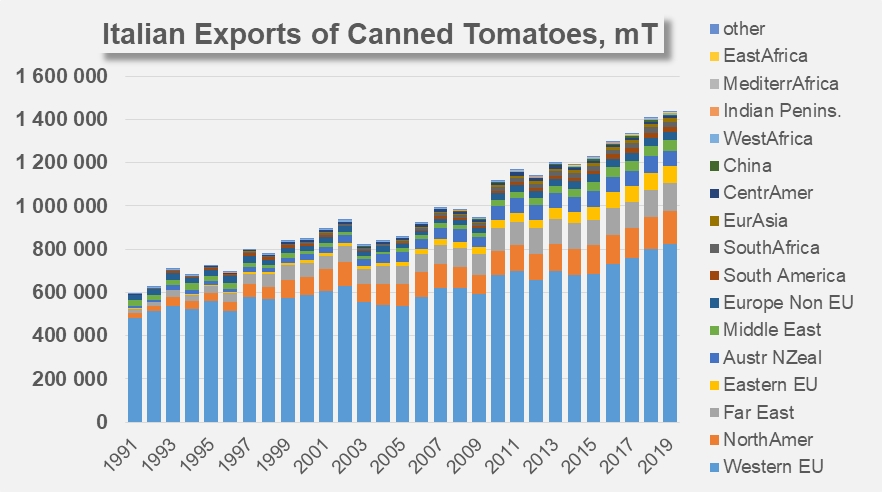 Italian sauce exports recorded a real leap last year, climbing from an average of just over 124 000 mT during the period running 2016-2018 to a result exceeding 155 800 mT in 2019. This increase represents a gain of nearly 32 000 mT (+25%), most of which was achieved within the European Community market (24 700 mT), as well as on the markets of North America (2 600 mT) and Australasia. The most significant increases occurred in Germany, France, Poland and Sweden, as well as in the United States and in Australia (like with canned tomatoes, despite the local policy of national preference in that country).
The rare decreases in export flows were mainly recorded in the Philippines, Venezuela and Moldova, for a few hundred tonnes each time.
This strong increase observed in terms of quantities resulted in an equally spectacular increase in value, since the turnover of Italian exports of sauces and ketchup in 2019 rose sharply by more than 27%, to nearly EUR 237 million. 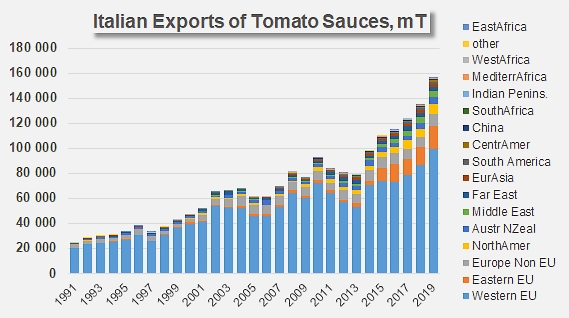 Although currently the least important of the three categories, the sauces sector is conversely the most dynamic in terms of profits for the Italian industry’s export operations. The average annual growth rate of the sector’s value has exceeded 6.5% over the last eight years, that is to say since the year of Italy’s recovery in terms of quantity and value. By comparison, the turnover of the “heavier” sectors of canned tomatoes (in view of the quantities exported and Italy's dominance of the global market) and pastes (due to the quantities of raw materials absorbed) “only” grew over the same period by 4% and 1.4% respectively on average annually.
Ultimately, Italy’s performance in terms of turnover from exports in 2019 stood at around EUR 1.903 billion, up EUR 170 million (almost 10%) compared to the average result of the previous three years (EUR 1.73 billion over the 2016/2018 period). 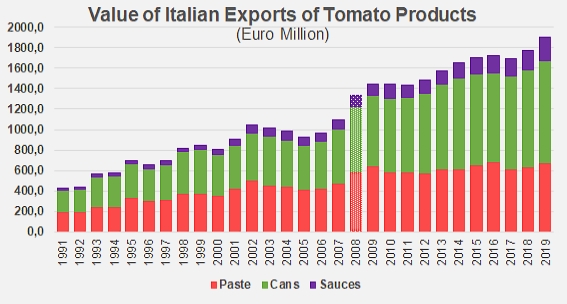 It is important to note, however, that this improvement in turnover indirectly necessitated the use of larger quantities of raw materials, with a mechanical impact on profitability. In 2019, the quantities of fresh tomatoes absorbed by the production of tomato pastes sold on foreign markets can be estimated (taking into account the different segments (Brix) involved in foreign sales) at just over 3.18 million tonnes. This level is 4.3% higher than the average annual quantities absorbed by the category’s exports over the previous three years.
Similarly, the quantities of raw materials absorbed by exports of canned tomatoes and sauces amounted, respectively, to slightly more than 1.8 million tonnes and nearly 390 000 tonnes. In both cases, the increases have been significant compared to the performances for the period running 2016-2018, of approximately +6.5% for canned tomatoes and +25% for sauces
In the final count, approximately 5.379 million tonnes (estimated) of fresh tomatoes were absorbed by Italian exports of tomato products overall, between January and December of last year, which is 323 000 tonnes (or 6.4%) more than the annual average over the period running 2016-2018.

A comparison between the turnover generated by exports and the quantities of raw materials absorbed highlights a difference in growth rates that tips in favor of the value of raw tomatoes. In 2019, each metric tonne of tomato exported in processed form was valued on average at around EUR 354. In 2018, this same value reached around EUR 350 and over the 2016/2018 period, it was estimated at around EUR 343.
The increasingly marked focus of the Italian industry on export sectors that are bigger drivers in terms of profitability (sauces and canned tomatoes) has been providing some very concrete results. Since 2008, the total value of exported products has increased from EUR 1.34 billion to 1.903 billion, at an average annual growth rate of 3.25%. At the same time, the volumes of raw materials absorbed by the production of processed products for export has only increased at a rate of 1.25% per year.
The gain in terms of annual growth in value over the last ten years is close to 2%. This dynamic at least partly explains the interest shown by Italian leaders of the sector for foreign markets, especially the closer European ones, as they find in these outlets a way of trying to balance out the slowdown in the quantity and the value of tomato products recorded on the Italian market. 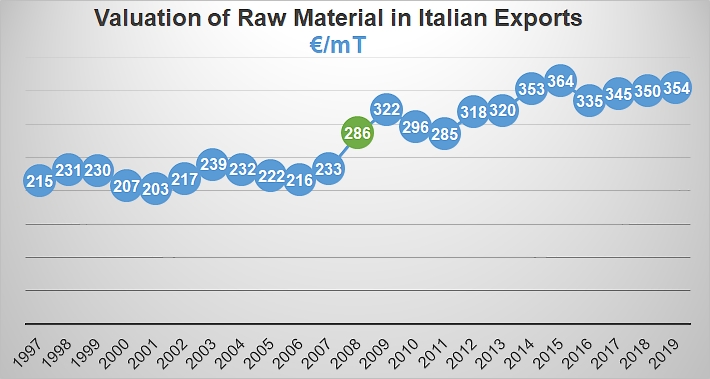 Some complementary data
Italian exports of paste, non-EU countries (by region) and EU (by country). 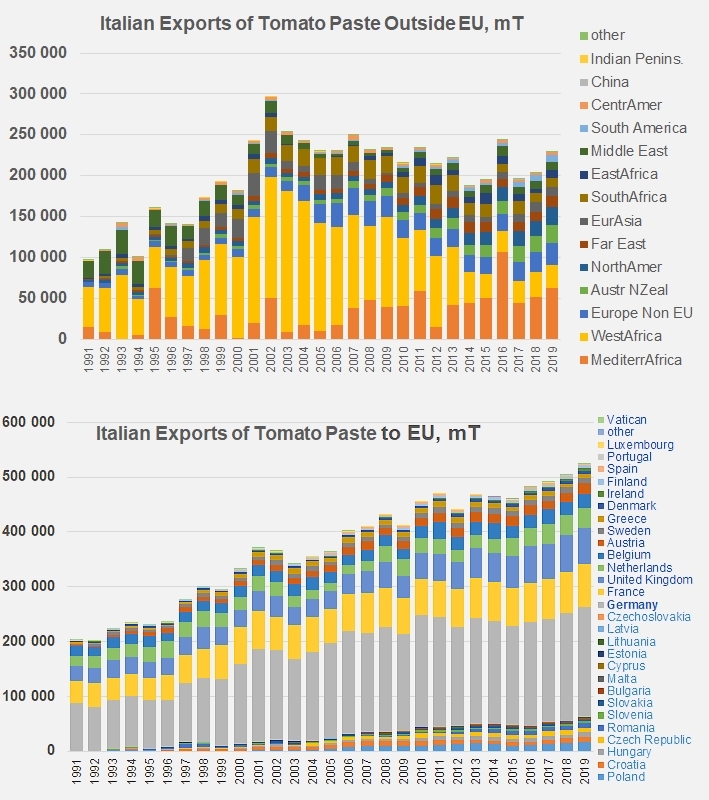 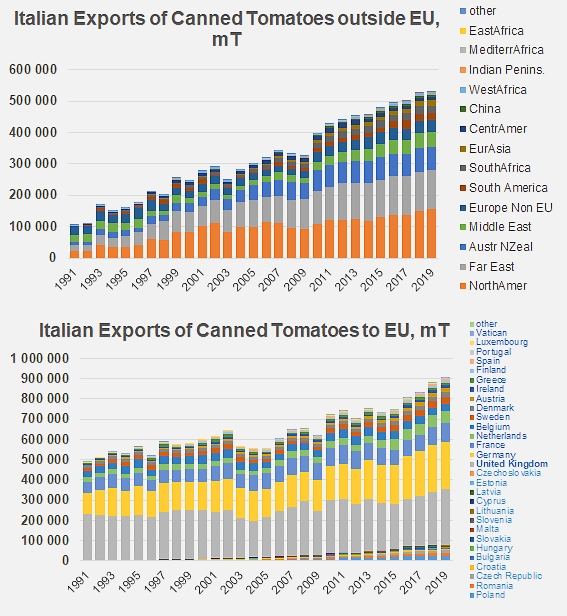 Italian exports of sauces, non-EU countries (by region) and EU (by country). 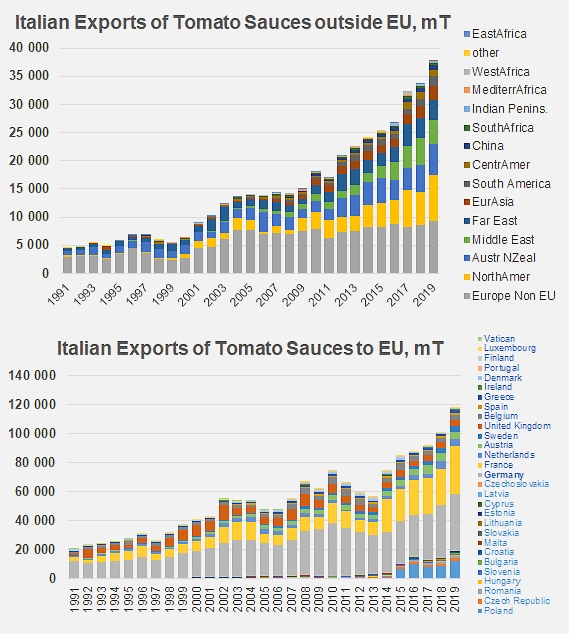