16/05/2018 - François-Xavier Branthôme - Read in French
Should the "Brix" system as a basis for the pricing of tomato paste be reviewed?

More than 23 million tonnes (metric, mT) of raw tomatoes were absorbed in 2016/2017 by the products exported by the 12 main countries operating in the industrially processed tomato market, accounting for approximately 92% of total worldwide shipments recorded for the marketing year. The various products, qualities, conditionings, origins, shipment methods, contracts, etc. do not provide a reliable and accurate representation of the way these products are valued, according to category, country, quality, etc.
It may be possible to determine the average annual value level of the raw materials exported in processed form and their evolution over the past two decades by combining for each of the leading industries the statistical data regarding quantities and value. In this way, for example, the 6.127 million tonnes of raw tomatoes absorbed by the manufacturing of paste, canned tomatoes and sauces exported by Chinese operators in 2016/2017 have generated a turnover of USD 697.1 million, thanks to which it is possible to approximately estimate the value generated by each tonne of raw materials at approximately USD 114.

According to the variations in either direction dictated by the evolution of the worldwide commercial context, the global average value of the raw materials absorbed in producing products to be exported has undergone over the past 20 years a progression that is hesitant and certainly unremarkable. Globally, this value has grown from a lower level of USD 163 /mT (in 2000/2001) and a higher level of USD 284 /mT (in 2013/2014) (see our article on the decrease of worldwide expenditure, published 13 April 2018). However, between the USD 214 generated by each tonne of raw tomato processed for the export markets in 1997/1998 and the USD 228 generated in 2016/2017, the cyclical succession of gains and losses over the past two decades resulted last year in a minimal progression (less than in USD 14 /mT), for an average annual growth rate that is relatively weak at 0.33% (CAGR) per year. 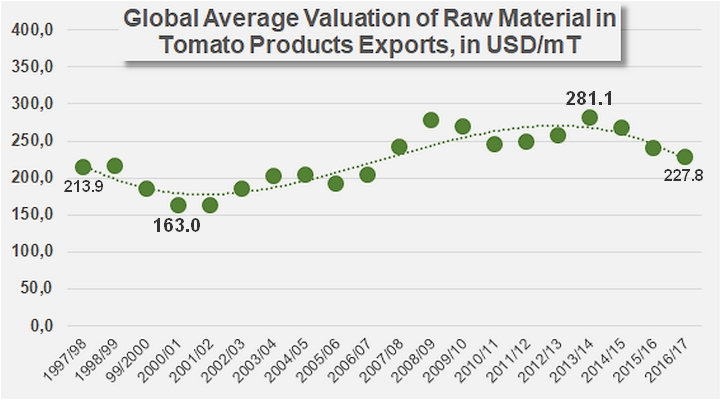 This final value level (USD 227.8 /mT in 2016/2017) may not be an accurate way of describing a product, its conditioning, origin or specific shipment method, but it is nonetheless representative of dynamics in which all aspects of the distribution of tomato products have been taken into account, faithfully reflecting the deterioration of prices that has been occurring over the past few years for all of the operators of the worldwide industry.

All of the "product" components of global valuation have indeed been affected in similar proportions by the general deteriorating tendency of worldwide prices for tomato products. In the case of canned tomatoes, the beginning of the 2000s saw a spectacular improvement in the value generated by each tonne of raw materials exported in processed form. The estimated values grew from USD 424 /mT in 1997/1998 to USD 765 /mT in 2008/2009, before recording several successive fallbacks in recent years, bringing the average annual valuation level to approximately USD 579 /mT. Although the valuation levels are considerably different (for information, USD 151 /mT for pastes and USD 403 /mT for sauces during the past marketing years), the observation is very similar for the other two categories. But the dynamics themselves are worrying, at least as much if not more so, because they describe trends that can be observed at a worldwide level (and not just local isolated phenomena) and because they intrinsically ask the basic and very practical question of the profitability of the different product categories. 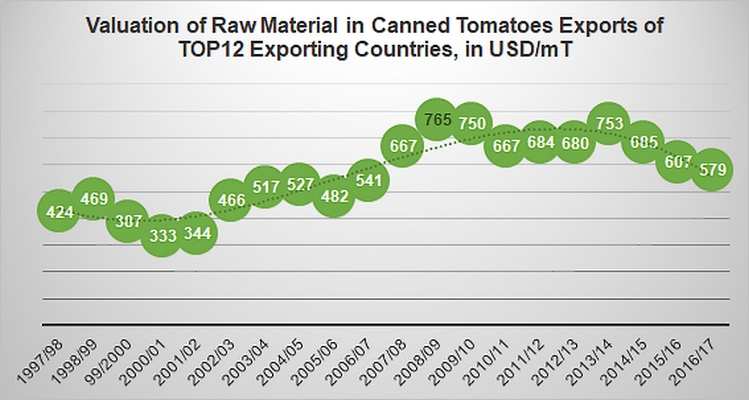 (Comparative diagrams drawn up for the pastes and sauces categories are presented in the appendices at the end of this article.)

This approach does not give adequate account of the performance of the various categories and the different national industries around the world, but it does show that the most "profitable" operations are logically exclusively focused on manufacturing more elaborate products whose valuation is higher at both the intermediary stage and with the final consumer. In 2016/2017, the best value/quantity ratios were recorded by products from the foreign operations of Germany and the Netherlands, and this observation is also true of previous marketing years. These exports mainly featured sauces, and they respectively took the value of one tonne of raw tomato to about EUR 428 /mT (or USD 467 /mT) and EUR 387 /mT (or USD 422 /mT). These industries are particularly high performing in terms of the valuation of raw materials, and they are paradoxically those that do not operate as primary processors. But Germany and the Netherlands are by nature the exception. The case of Italy is fundamentally different, as it has recorded exceptionally high valuation levels whilst at the same time figuring basically and historically among world-class operators of the primary processing industry. Over the past marketing year, the average valuation of one tonne of Italian tomatoes processed for the export market amounted to close on EUR 335 /mT (slightly more than USD 365 /mT). This level can be explained by the exceptionally large contribution of canned tomatoes (51%) to the total turnover, which is a specifically Italian situation that is the result of the long term preponderance of products from the South of the peninsula in this operating sector. Both Italy and Iran, due to the excellent valuation levels of a number of their products (canned tomato in the case of Italy and pastes in the case of Iran), have been the only countries to record an overall result that is higher than the average of the worldwide Top12 list in 2016/2017 (USD 217 /mT or EUR 199 /mT). Turkey operates in the same geographical sphere as Iran, and also benefits from a relatively high level of valuation for its pastes (USD 212 /mT), which allows it to position itself very close to the global average and, paradoxically, ahead of countries like the United States (USD 203 /mT) and Greece (USD 200 /mT or EUR 183 /mT, see our article dated 30 April 2018) whose export shipments are largely made up of sauces and canned tomatoes. 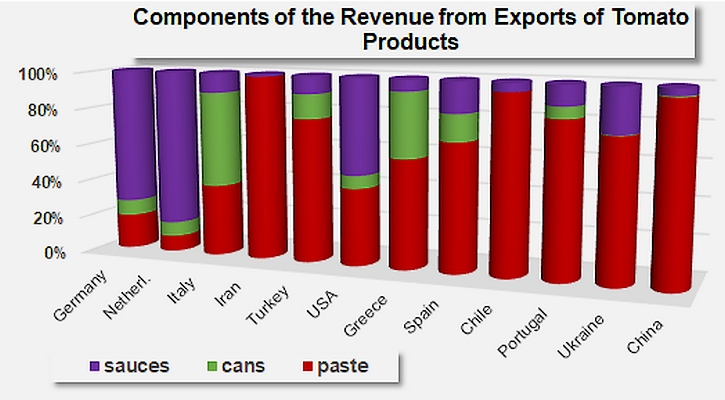 Components of the revenue of exporting countries ranked according to decreasing levels of valuation of raw materials used in export products: the best performances are linked to the predominance of sauces or canned tomatoes, with the lowest performances linked to pastes.

Midway between the previous group and the last four countries of the list, Spain combines a strong tradition for exporting pastes and a currently considerable level of development for its foreign sales of sauces and canned tomatoes. At EUR 165 /mT (or approximately USD 180 /mT), the valuation of raw materials used by Spanish export operators remains far below the best performances of the sector while still ranking well above those of the Chilean industry (USD 153 /mT, or EUR 140 /mT) or the Portuguese industry (EUR 139 /mT or USD 151 /mT). Finally, with far lower export values resulting notably from very aggressive trade strategies, raw materials from China and Ukraine – which are mostly used in making paste for export – only generate fairly modest revenue compared to the overall results of the industry worldwide. According to the data supplied by Chinese customs services, the revenue generated when one tonne of raw tomatoes is processed and exported from China (USD 114 /mT) is almost three times smaller than a tonne of tomatoes harvested and processed in Italy... 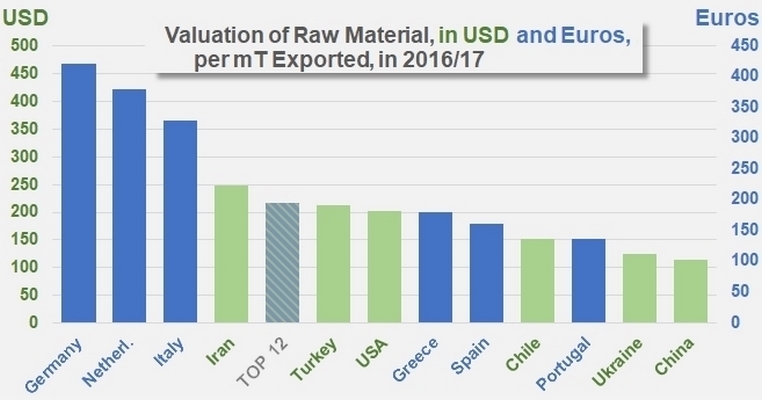 Summary of the valuation of tomato raw materials used in exports by the 12 main processing countries.

Success through diversification
The performances of the world's biggest tomato industries can also be measured in terms of their capacity to develop the profitability of their exports over time. On this point, the Greek industry has undoubtedly progressed most remarkably over recent years. The reorientation of its export volumes towards canned tomatoes and sauces has resulted in a per-tonne valuation of its raw materials that has grown by 3.05% per year on average over the past 20 marketing years, maintaining an overall growth rate close to 0.7% in the difficult global context of the past six years.
Products exported by Turkey have achieved a similarly remarkable progression (CAGR: 2.95%) for the period running 1997/1998–2016/2017, but the most recent years of this period have been marked by increasing difficulties that have caused a slowdown in valuation between 2011/2012 and the latest marketing year (CAGR: -1.5%).
Although the growth rates have been more measured, if not actually unremarkable, the industries in Italy and Germany (+2.1%), Portugal and China (+1.2%) and the US (+0.7%) have also improved the profitability of their raw materials over the past two decades. However, not many industries have been able to maintain a positive progression after 2011/2012. This is actually the case of tomato products from Italy, Portugal, Greece and Germany, while US and Chinese valuations have recorded slight decreases (between 0.04% and 0.4%) over the past six marketing years. Beyond these different situations, some of which simply indicate a relative stability of operations and prices for finished products, one country has seen the valuation of its raw tomato used for export products not only drop over the past few marketing years but also over the past two decades as a whole: the valuation of Spanish raw materials used in making products for export went from EUR 218 /mT in 1997/1998 to EUR 165 /mT in 2016/2017, which is an average annual decrease of about 1.5% over the past 20 marketing years and of 1% per year over the past six years. 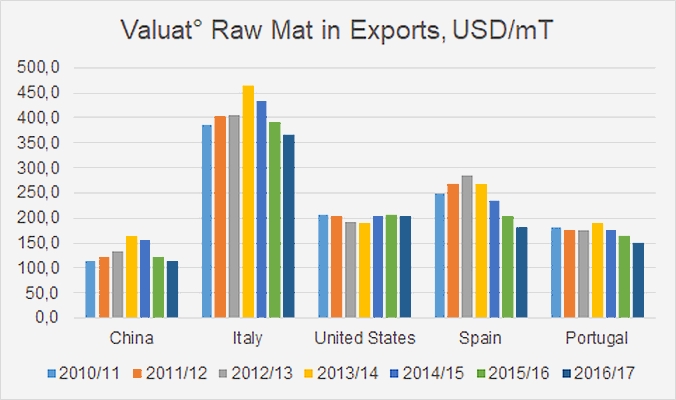 Some complementary data
Comparative view of national export results, expressed in thousands of tonnes of raw materials and in millions of US dollars. 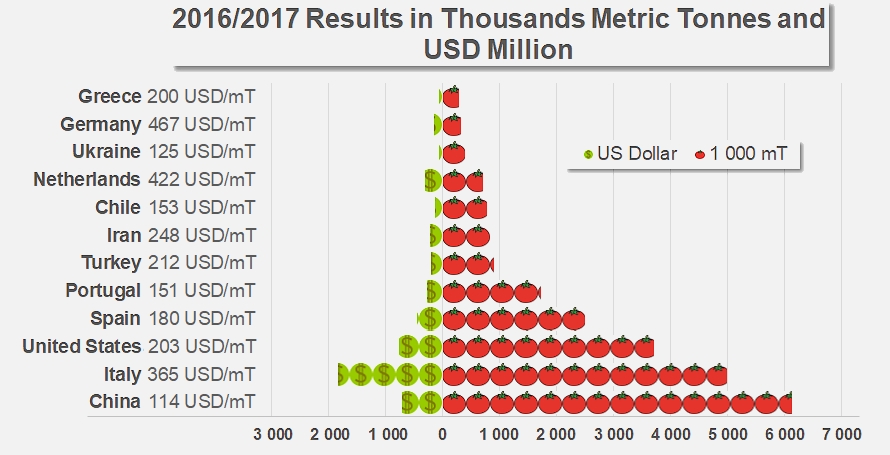 Turnover and contribution of the different categories to the overall revenue of exports for the 12 main countries to export tomato products. 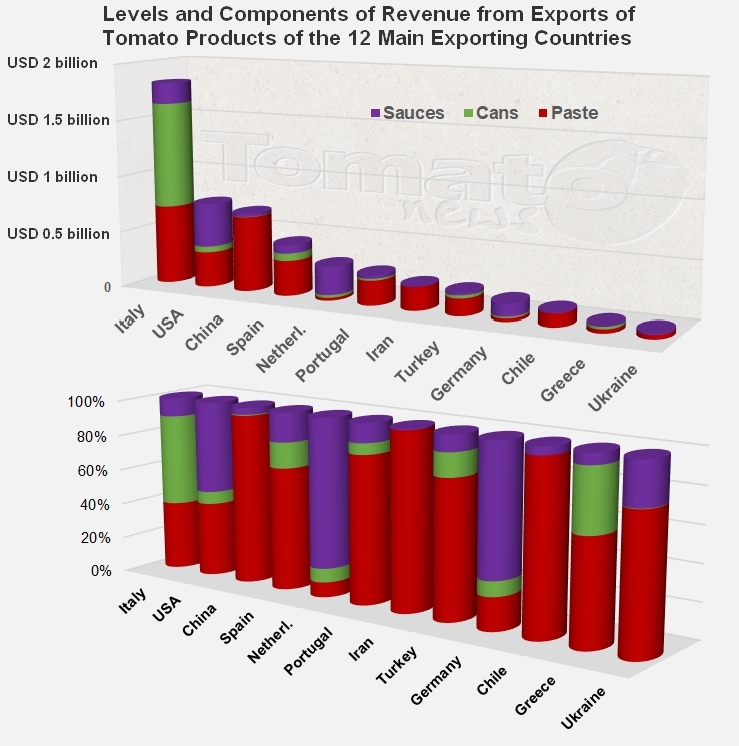 Evolution of the valuation in USD/mT over the past 20 marketing years (USA, China, Ukraine, Turkey, Chile). 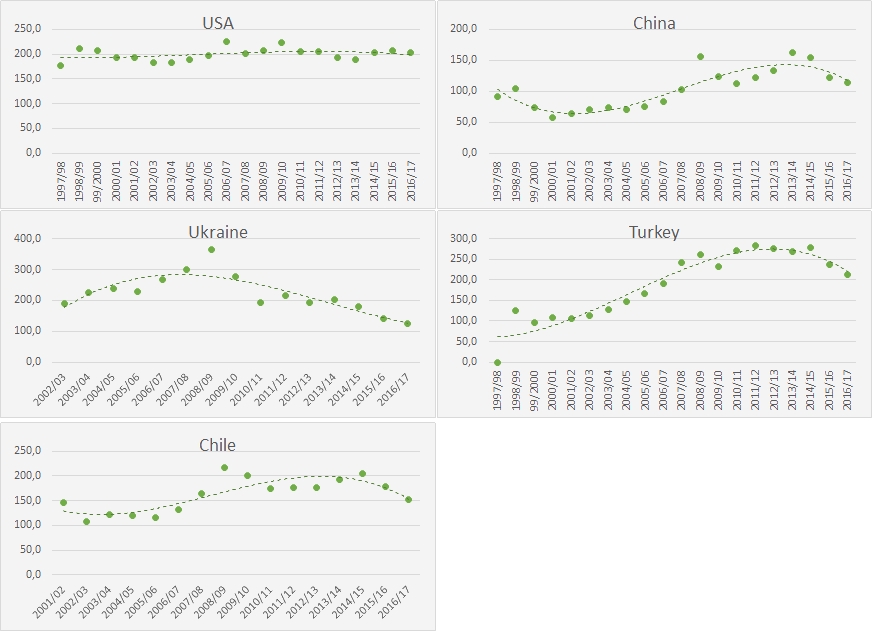 Evolution of the valuation in EUR/mT over the past 20 marketing years (Italy, Spain, Portugal, Greece, Germany, Netherlands). 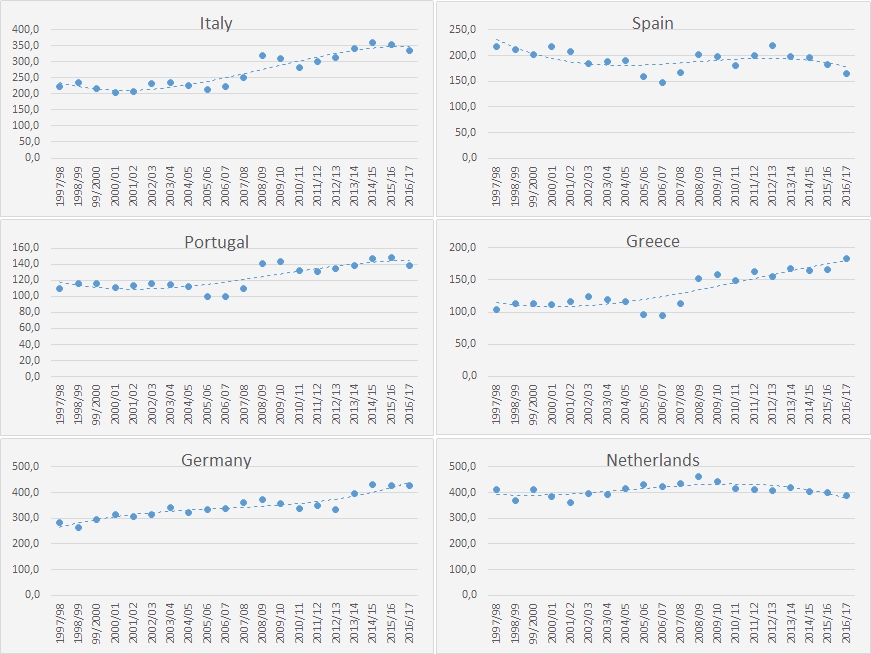 Evolution of the average global valuation of raw materials used in producing paste for export. 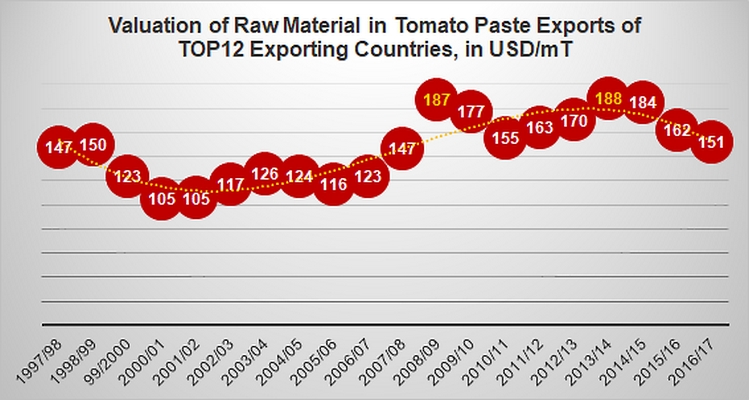 Evolution of the average global valuation of raw materials used in producing sauces for export. 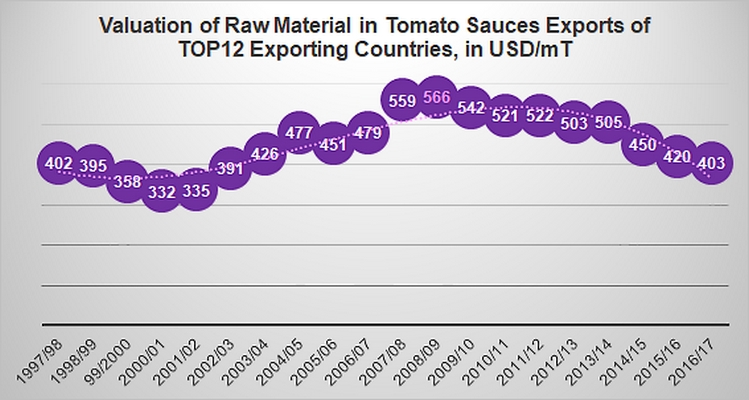 We welcome comments from our readers on all our articles and will publish those which can enrich the discussion and the dissemination of valuable knowledge. You can send us your input to the Editor François-Xavier Branthôme at fxb@tomatonews.com.