17/04/2019 - François-Xavier Branthôme - Lire en français
In 2018, German purchases of tomato products recorded a small dip overall, with a total imported volume of slightly less than 650 000 mT – all products combined – against close on 633 000 mT the previous year (2017). The drop has not been particularly big, and is similar to the ones recorded in 2013 and 2006, so it is probably more appropriate to describe it as an adjustment: the volumes involved remain limited with regard to total operations involving Germany, and the imports recorded in 2018 were only 1% lower than the average of the three previous years.

The preeminent position occupied by Germany among tomato-product importing countries has not been jeopardized: last year, Germany retained its first face in the worldwide ranking of countries that purchase tomato paste, with more than 246 000 mT imported, mainly low-concentration pastes (60%) intended for the retail market (tariff code 20029019) and 12-30° Brix pastes intended for the catering trade and industrial use (tariff code 20029031). In 2018, German imports of pastes recorded a noticeable drop compared to the volumes recorded the previous year (262 800 mT, which themselves represented a sharp increase compared to 2016), but were actually only 8 200 mT (-3%) lower than the average of the three previous years (2015, 2016 and 2017). These changes are part of a wider dynamic that has seen supplies of pastes in catering and industrial packs (20029031 and 20029091, average CAGR of -4.6%) progressively shrink in proportion over the past ten years, while the proportion represented by imported pastes in retail packs has recorded a notable increase (20029019, 20029039 and 20029099, average CAGR of +7.2%).
The slowdown observed against the three previous years has mainly been recorded for shipments into the country of Chinese and Chilean products and, to a lesser extent, for purchases of Turkish and Ukrainian products. Supplies of paste from within the European Union (66% from Italy and 22% from Spain) remained virtually stable (-0.1%). 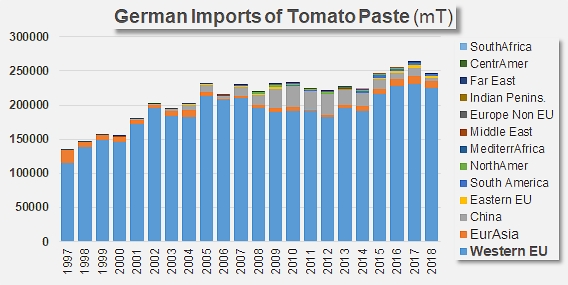 In 2018, directly carrying over its levels of operations from previous years, Germany was also the second biggest importer of canned tomatoes, with more than 236 300 mT imported, mostly from Italy (212 700 mT, which is 90% of the total). Spain, Portugal, Turkey, the Netherlands, Poland and Austria also feature among the regular suppliers (although of minor importance) of the German canned tomato market.
Like for the paste category, import volumes recorded a notable drop in 2018 (-12 100 mT, -5%), though this result should be understood in the context of the sharp increase in supply volumes recorded the previous year, in 2017. Within a few hundred tonnes, German imports of canned tomatoes were practically identical in 2018 to the average volumes purchased over the previous three years. 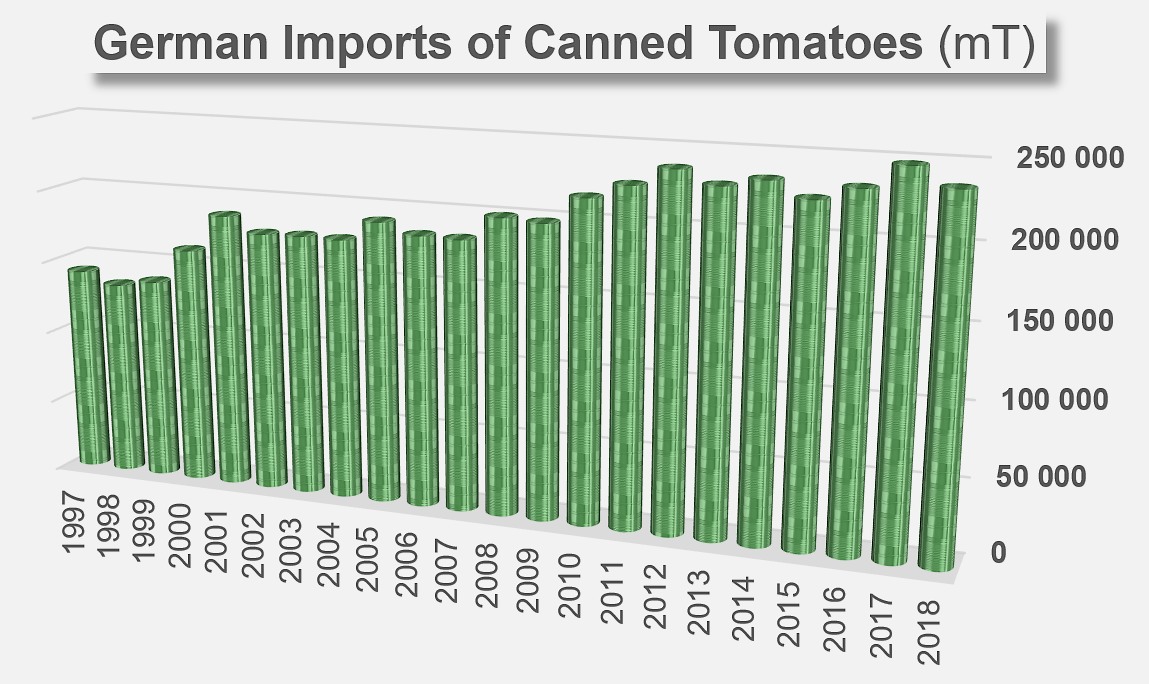 German supplies of sauces & ketchup have seen far greater competition than the canned tomato market, while remaining the reserved territory of a limited number of countries that almost all belong to the European Union. The countries that feature among the main supplying countries for this category are the Netherlands, Italy, Poland, Austria, etc., for a total traded volume of 132 400 mT in 2018, which positions Germany in fourth place worldwide among importing countries of sauces & ketchup.
This latest category differs from that of pastes and canned tomatoes in that it follows a far more dynamic pattern, which saw increases in 2018 of close on 11 000 mT (+9%) compared to the previous year and of 14 400 mT (+12%) compared to the average performance of the three previous years. 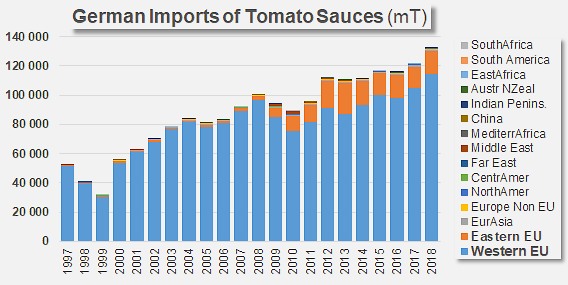 German expenditure on supplies of tomato products has been stagnating for about four years at around EUR 540 million. Over this period, EUR 239 million (a decrease, at 44% of the total) were dedicated on average each year to imports of pastes, with the invoices for canned tomatoes and sauces respectively amounting to EUR 156 million (unchanged, at 29% of the total invoice) and EUR 146 million (an increase, at 27% of the total). 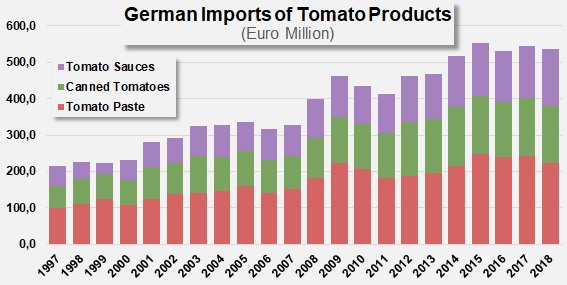 Some complementary data
Evolution of German imports of tomato products, according to category. After a relatively regular overall progression for the past nine years, the volumes of raw tomatoes absorbed in 2018 by German purchases of processed products recorded a notable decrease, estimated at 3.5% compared to 2017 and at close to 2% compared to the average for the period running 2015-2017. 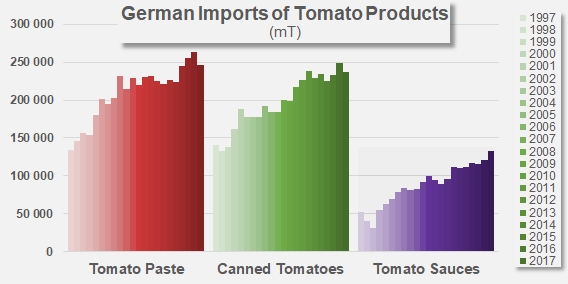 Distribution of German imports of tomato pastes, by product segment. 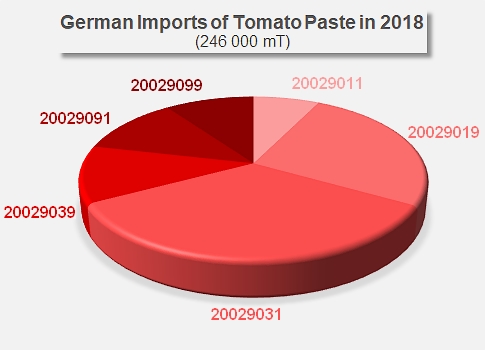 Further details regarding the German trade will be published in the 2019 Processed Tomato Yearbook which will be distributed at the Tomato News Conference in Avignon. It will be available for purchase from 15 May 2019 (see GET LISTED).