France's expenditure on imports of tomato products approached EUR 400 million last year. This level of spending made France the third largest market in the world in 2020 (valued as of 30 November 2020), behind Germany and the United Kingdom, but ahead of Japan and Canada. After six years of relatively stable expenditure at around EUR 382 million, this new figure also marks a notable increase (around 5%) in the invoice for French imports of tomato products.

The Covid crisis and its effects on consumption can certainly account for some of this growth. Along with many other countries that are very dependent on foreign purchases for their supplies of processed tomato products, France is among the nations whose imports increased significantly last year (see our other articles on this subject). Confinement measures put in place around the world have in fact resulted in increased consumption, particularly in retail formats, and provided an exceptional impetus in global movements for certain categories of products.
However, the different sectors and segments were variously affected by the jump recorded during the spring in most of the countries that are chronic importers. In the case of France, imports of sauces (customs codes 210320) were mostly left out by the general trend and ended the year with a very noticeable drop of almost 14% in volume and 7% in value (compared to the average of the four previous years (period running 2016-2019)).
Conversely, France's foreign purchases of concentrated purees (customs codes 200290) and canned tomatoes (200210) respectively increased in 2020 by more than 11% and 8% in volume, and by more than 18% and nearly 14% in value, driven by remarkable increases in March-April, as well as between August and November. 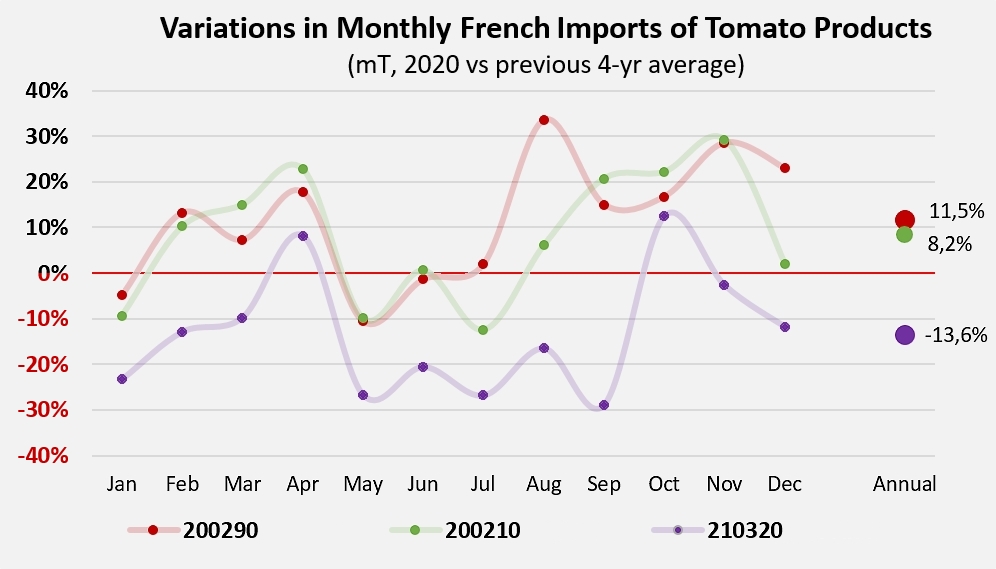 Differences between monthly imports for 2020 and the averages of the previous four years for the three product categories
In a detailed breakdown, French supplies mobilized last year a total of 123,500 mT of concentrated purees, 132,000 mT of canned tomatoes and 143,000 mT of tomato sauces and ketchup. The value of imported products amounted to more than EUR 118 million (USD 135 million) for the concentrated purees category, nearly EUR 107 million (USD 122 million USD) for canned tomatoes and more than EUR 174 million (USD 199 million) for sauces and ketchup.

In the concentrated purees category (customs codes 200290...), the comparison of the calendar year 2020 with the three previous years shows an intensification of trade flows from Spain (+3,800 mT) and Portugal (+1,100 mT), and particularly spectacular increases for Tunisian (+3,600 mT) and Turkish (+700 mT) products. Despite this context being favorable, Italian products were only able to carry-over (-160 mT) the average performance of previous years. However, 2020 has not changed anything in the hierarchy of supplier countries : over the last three years, Italian pastes have “held on” to a 61% share of the French market, ahead of Spanish products (21%) and Portuguese ones (9%). French imports of concentrated purees, by segment
Findings are quite similar for French imports of canned tomatoes (peeled, diced, etc.) (customs codes 200210...). The year 2020 saw the rate of consumption diverge quite markedly from the average growth momentum of previous years, with volumes increasing significantly (+9,500 mT, +8%) compared to the results for the period running 2017-2019.
The balance of distribution between the different supplier countries remained even closer to the previous situation in this category than in the previous one, with an increase in the quantities imported almost uniformly distributed between the different players. Italian positions on the French market (64% of the quantities) were directly supported by an increase in the volumes delivered of nearly 2,900 mT (+4%) compared to the average performance of the three previous years, and indirectly by the increases recorded for imports from Germany (+3,600 mT, 56%). The Spanish industry, which provides around 26% of French supplies of canned tomatoes, also recorded a good year in 2020, with an increase of nearly 4,200 mT (+13%) in the quantities delivered to France. The Netherlands and Morocco, whose involvement was already limited, saw their sales of canned tomatoes to France drop considerably last year (-17% and -43%) and their market shares (1% to 2%) shrink drastically. French imports of sauces (customs codes 210320), which had already been declining slowly for half a dozen years, fell sharply last year, mainly due to a drastic reduction in purchases of products from the Netherlands.
During the same period, Spain, which has been the main supplier of sauces to the French market for many years, saw its market share gradually and markedly decline in favor of products now imported from Italy. All in all, on a market of just under 143,000 mT in 2020, imports from Italy alone increased by more than 8,600 mT (+21%) compared to the average performance for the period running 2017-2019, thus taking Italy's share to around 35% of French supplies last year (compared to less than 17% in 2000). No other regular supplier country recorded an increase on this French market last year. So Italy's progression occurred at the expense of Spain, Portugal, Poland and other countries, many of which only operate as remanufacturers (Germany, Belgium and the Netherlands).
Indeed, in terms of market shares, the lines have shifted slightly among the various supplier countries. Over the last three years, the gap between the Spanish leader (44% of the French market by volume) and its direct competitor Italy (29% of the market share) narrowed considerably, at the expense of shipments from Germany (8% of quantities imported into France), the Netherlands (7%), Belgium (6%), Portugal (3%) and other countries (3%). 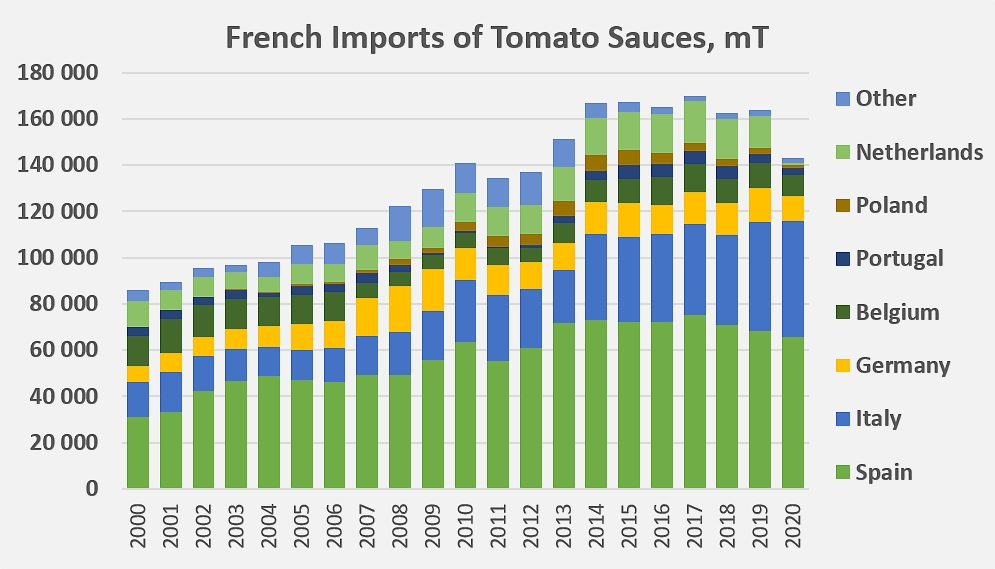 In the final count, recent increases in French expenditure on imports of tomato products have mainly benefited Italian processors and, to a lesser extent, their Spanish counterparts, while other historical supplier countries have seen their turnover decline considerably. The year 2020 accentuated this pattern, with Italian and Spanish products (pastes, canned tomatoes, sauces) respectively absorbing more than half and nearly one third of French expenditure (i.e. a total of around EUR 323 million), leaving only around EUR 76 million to be shared between operators in Germany, Belgium, Portugal, the Netherlands, etc. 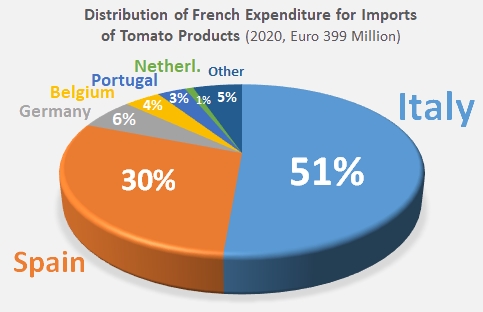 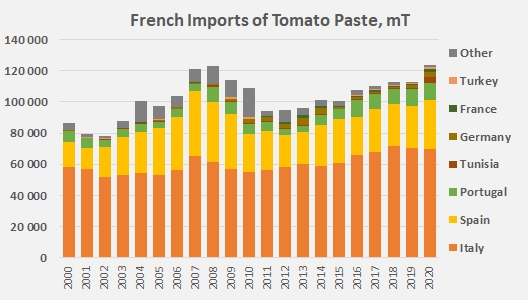 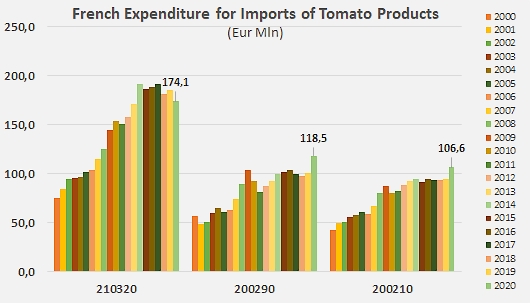