China: exports under threat from a possible extension of the boycott 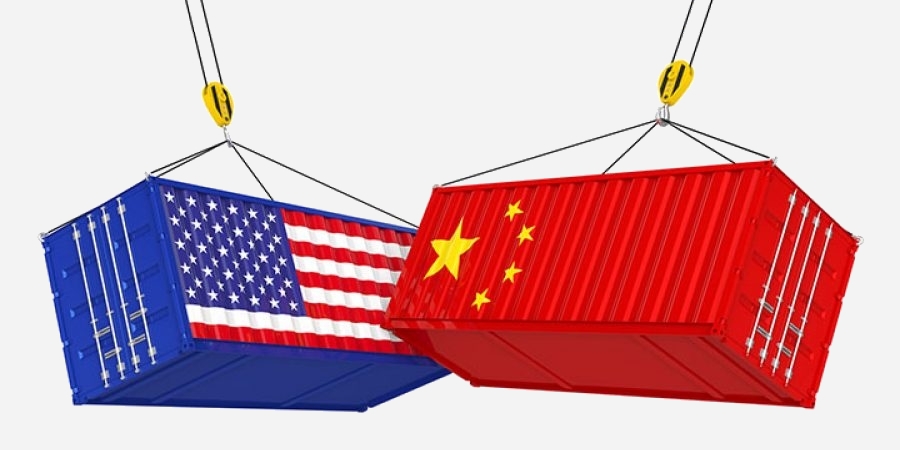 On 13 January, the US Customs and Border Protection (CBP) announced the boycott by the United States of "products resulting from the forced labor of Uyghurs, including cotton from Xinjiang, as well as all tomato-based products" (pastes, canned tomatoes, sauces and seeds). This embargo is in line with announcements made on 12 January by the UK and Canada, stating that they are to stop importing goods that directly involve what Western diplomacy calls "ethnocide."
On 12 January 2021, Canada announced its decision to prohibit goods produced wholly or in part by forced labor, and to require companies operating in Xinjiang to acknowledge the human rights situation in the region. Earlier in the day, Britain announced similar measures.
According to British diplomacy, this measure of economic warfare opposes the "arbitrary detention, political re-education, forced labor, torture and forced sterilization [of Uyghurs] on an industrial scale." The trade war is now centered around Ottawa and London, and pressure on Washington. It is clear that these efforts on the part of those countries bounce off the European Union's investment agreements with China in December 2020, concluded at the end of negotiations which "took place in defiance of the rules signed by the International Labor Organization, which Beijing refused to sign." In the context of a stormy post-Brexit climate and bipolar economic war, these events create a diplomatic chasm between allied powers, forcing Europe into an isolated position.
The measure issued on 13 January by the Trump administration follows a more targeted ban by the same government issued in December against cotton products made by the Xinjiang Production and Construction Corps, which CBP called "an economic and paramilitary organization subordinate to the Chinese Communist Party."
In September, the United States banned the import of certain apparel and computer parts from China, saying they were made by forced laborers from Xinjiang. The U.S. actions have followed a concerted push by a coalition of more than 190 organizations urging major fashion brands to stop using Xinjiang cotton, and international auditing firms to stop working with factories in the region.
"The so-called forced labor is manufactured and fabricated by certain Western institutions and people, including the U.S.," said Foreign Ministry spokesman Zhao Lijiian in Beijing. "The purpose is to crack down on relevant Chinese parties and companies and curb China’s development." »
The U.S. imported USD 9 billion of cotton products in the past year and USD 10 million of tomatoes from China, said Brenda Smith, the Executive Assistant Commissioner in the office of trade at CBP. According to Bloomberg’s official figures, Xinjiang is China – and Asia’s – largest tomato production and processing region, generating about 70% of the country’s total shipments of the commodity. Tomatoes are also the largest export commodity for the region, with an annual value of more than USD 500 million. COFCO Tunhe, Chalkis Health Industry Co. and Xinjiang Tianye dominate the tomato industry in the region, with a 60% market share.
China is the world’s top exporter of tomato paste, accounting for nearly 40% of global trade, according to local media reports. Xinjiang exported more than 80% of its tomato paste to Russia and Italy in the first 8 months of 2019.

Chinese exports of tomato products under codes 200290 to Canada, the United Kingdom and the USA.
The goods to be held at U.S. ports of entry include apparel, textiles, tomato seeds, canned tomatoes and tomato sauce, stated acting Customs and Border Protection Commissioner Mark Morgan. The so-called withhold-release order will also apply to products manufactured in other countries that use cotton and tomatoes or tomato products from Xinjiang, he added.
New US President Joe Biden has labeled China’s mass detention and re-education program for Xinjiang’s Uyghur minority as "genocide" and called for an international effort to take a united stand against the campaign.
In addition to ensuring targeted enforcement, the incoming administration should consider a "whole-of-world" approach to align allies of the US on ending forced labor in Xinjiang, stated Stephen Lamar, President of the AAFA (American Apparel & Footwear Association).
Real figures and the risk of a ripple effect
Beyond the immediate effects of such decisions and measures – which remain very limited quantitatively – it is the impact of a possible generalization of the approach, which the Biden administration is hoping to achieve, that could impact Chinese foreign sales.
Indeed, the quantities absorbed by British, Canadian and US purchases did not exceed 8,400 metric tonnes of tomato pastes (finished products) in total last year (period running December 2019 to November 2020). This level is much lower than it was in 2015 (18,000 mT) or in 2011 (36,000 mT). Direct exports alone to these three countries have only accounted for barely 1% of total annual volumes exported by the Chinese industry over the past three years.
On the other hand, the comprehensive approach advocated by the new US administration and the application of the embargo to products made in other countries from tomato products of Chinese origin could have far more serious consequences. The quantities of sauces – or other goods made from Chinese products in Europe, Asia, South America or elsewhere – that enter the US each year are currently extremely difficult to assess, but the repercussions if these trade flows were to disappear would undoubtedly be more considerable for the processing sector in Xinjiang.
As shown by the gradual hardening of measures and the tighter links with other countries, this withhold-release order put in place by the US authorities could also be adopted by their British and Canadian “allies”, or even extend to the “English-speaking diplomatic sphere” as a whole, which would include Australia and New Zealand, as some experts in international politics seem to think could happen. The volumes directly concerned would then rise to approximately 20,000 tonnes of finished products (barely more than 2% of average Chinese exports for the last three years), to which would once again be added the quantities of products manufactured by other countries sourcing their materials in China. These countries would then be forced to find new sources in order to maintain their trade relations.
For the time being, the European Community has not commented on the Canadian, British and US positions.

Chinese exports of tomato products under codes 200290 to Canada, the UK, the USA, Australia and New-Zealand.
Quantities exported by China under codes 200290 between December 2019 and November 2020 fell by 8% over one year and by around 2% compared to the average result of the three previous years (2016/17, 2017/18 and 2018/19 ), more or less following the pattern of decline in processing activity recorded in China in recent years.
With more than 80% of the average trade flows of the last three years, five regions represent the strategic outlets of the Chinese concentrated purees sector. Still first among these is the group comprising the countries of West Africa led by Ghana, Togo, Nigeria, Benin, Côte d'Ivoire, etc. However, the quantities delivered to this region (283,000 mT) over the period considered (Dec-Nov) fell by more than 8% over the year and by almost 11% compared to the average performance of the three previous equivalent periods. West Africa drained an average of one-third of China's overseas sales in this sector over the past three years.
EU27 purchases (around 150,000 mT over the period Dec 2019-Nov 2020), driven mainly by Italian imports (southern Italy, for re-export) and Polish ones to a much lesser extent, have recorded a strong increase in recent years (see additional data at the end of the article), which have raised the region to the position of second largest importer of Chinese tomato products under customs codes 200290, a position usually shared between the Middle East and the Far East. For its own requirements, the EU27 absorbed on average just over 13% of annual Chinese exports over the past three years. Conversely, it is undeniable that the share of Chinese products in European purchases is relatively large. So although, at the time of writing this article, we do not have all the figures for last period (Dec.-Nov.), we can remember that for previous marketing years (July-June), Chinese products accounted for about 8% of incoming trade-flows to EC countries.

Over the past three years (Dec-Nov periods), China exported similar amounts to the Middle East (119,000 mT), the Far East (115,000 mT) and Eurasia (100,000 mT). However, some of these important outlets have showed, to varying degrees, notable declines in their imports of Chinese products under customs codes 200290. The quantities imported by countries of the Middle East (notably the United Arab Emirates and Oman) and of Eurasia (Russia, Turkey) have decreased by 9% and 17% respectively compared to the average for the previous three years.
The Chinese sector is also trying to position itself on the export market for other categories. Volumes remain relatively anecdotal for canned tomatoes (customs codes 200210, at less than 3,200 mT per year over the last three periods considered), mainly intended for the Saudi market. They are slightly more substantial in the sauces category (customs codes 210320) where the quantities delivered to markets as diverse as Chile, Hong Kong, Ghana, Australia or Côte d'Ivoire, etc. averaged around 36,000 annually.
Total revenue from Chinese exports of tomato products, however, remain essentially based on the paste or concentrated puree category. Of the 720 million US dollars generated by foreign activity on average over the last three years, only 5% result from the sale of sauces (USD 29 million, 4%) and canned tomatoes (USD 5 million, 0.7%).
Latest update
Business results including the month of December were published after this article was written. They provide annual and semi-annual benchmarks for comparison with our previous analyzes of Chinese performance figures.

The quantities delivered to countries of the EU27 amounted to nearly 139,000 mT, up 19% over one year and 48% (more than 45,000 mT) compared to the average annual volume recorded over the previous three years.
Some additional data:
In any case, it is important to mention that Xinjiang, although it is the main Chinese tomato production and processing region, and currently the center of major political and commercial focus, is only one of the three zones where this activity is carried out: Inner Mongolia and Gansu account for between 15 and 20% of total Chinese production, depending on the year.
Evolution and distribution of Chinese exports (customs codes 200290) to EU27 countries 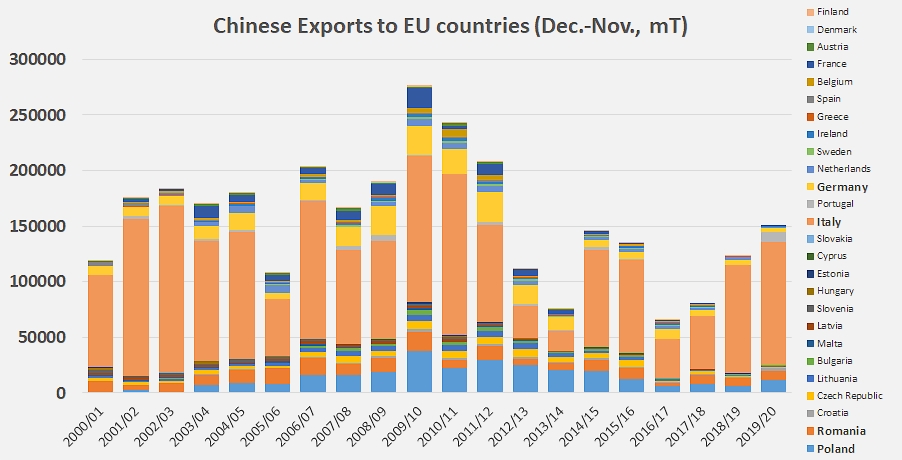 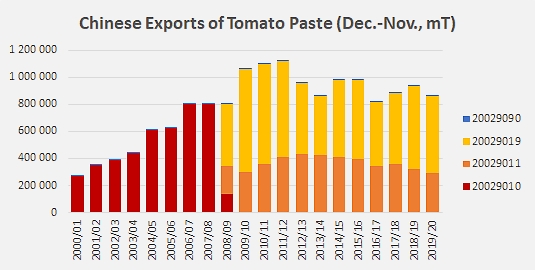