The results of Chilean paste exports during the 2019 calendar year broke dramatically with the usual variations and the growth rate, which was already impressive, that the Chilean industry has been demonstrating in recent years.
Last year, more than 180 000 metric tonnes of finished products, equivalent to just over a million tonnes of fresh tomatoes according to our estimation, were exported by operators of the country’s industry. Performances of the previous three years (2016, 2017 and 2018) were close to an average of approximately 118 000 mT, so the increase recorded last year represents a 53% jump in Chile’s foreign operations! This unexpected development brings the average annual growth rate to more than 10% over the eleven years of the period running 2008-2019, while it was already approaching 6% over the 2008/2018 period. 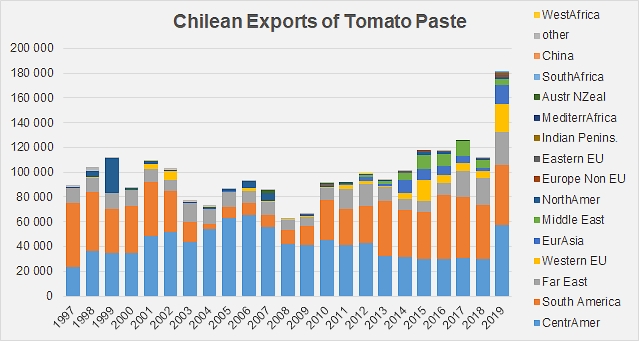 In several regions (Central America, Western EU, Eurasia and the Far East) many countries significantly increased their import volumes of Chilean pastes last year, compared to the average levels recorded over the previous three years. The most spectacular of these increases are those of Mexico (+13 900 mT), Italy (+13 700 mT), Turkey (+10 300 mT), Thailand, but also Cuba, Colombia, Japan, Costa Rica, etc. Only two countries significantly reduced their purchases of Chilean pastes last year: Venezuela (-4 600 mT), whose imports have been steadily decreasing since their peaks between 2009 and 2012 (20 000 to 24 000 mT per year) and, more brutally, Saudi Arabia (-4 700 mT) whose purchases amounted to more than 10 200 mT on average over the period 2015-2017. Less strategic for Chilean activity, a drop was also recorded for German imports, which fell in 2019 by around 1 500 mT.

The evolution of the exchange rate between the Chilean Peso and the US Dollar over the past two years has benefited Chilean products. Between the beginning of 2018 and the start of 2019, the Chilean currency depreciated by around 10% against the dollar, and this pattern increased in 2019 with a further fall of more than 16% against the American currency. The competitiveness of Chilean products has therefore increased significantly, not only on nearby and regular markets like Mexico, Cuba, Colombia, Costa Rica, etc., but also in more disputed and less usual destinations for Chilean players, like the Far East, Europe, Eurasia, etc. This situation explains at least in part the evolution of prices paid for Chilean pastes in recent years and the development of Chilean exports.
Last year, revenue from Chilean paste exports amounted to more than USD 147 million, up 39% from the average of the previous three years (about USD 106 million).

In 2019, the quantities (raw tomato equivalent) absorbed by exported products accounted for about 95% of the tonnages processed over the year. This ratio had decreased significantly over the previous three years, and it is reasonable to assume that this is an indicator, as is the evolution of the value of exported goods, of the approach adopted by Chilean operators who have been confronted in recent years, like their North American and European counterparts, with carryover stock volumes that are detrimental to the balance of the sector. 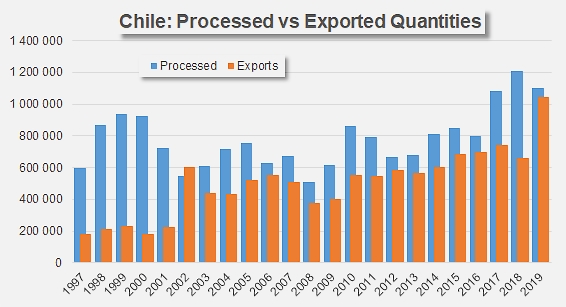 In any event, the jump recorded in 2019 in the paste sector is part of an already long-standing dynamic that has given Chilean exports access to markets beyond their nearby commercial sphere. In fifteen years, exports to destinations "outside of the Americas" have grown from 20% to 38% of total operations. In fact, Chile maintains only relatively discreet trade flows with its two large neighboring processing countries. Most of the trade involves tomato pastes, and the quantities mobilized by such exchanges in the other product categories remain relatively modest. For many years, Argentina has been in the top ranks, or even in very first position among the client countries of the Chilean industry, while imports of pastes regularly place Brazil along the Top 5 of Chile's customers. Trade flows for the other categories (canned tomatoes and sauces) are practically nonexistent, as indeed are trade volumes (all categories combined) between Argentina and Brazil. 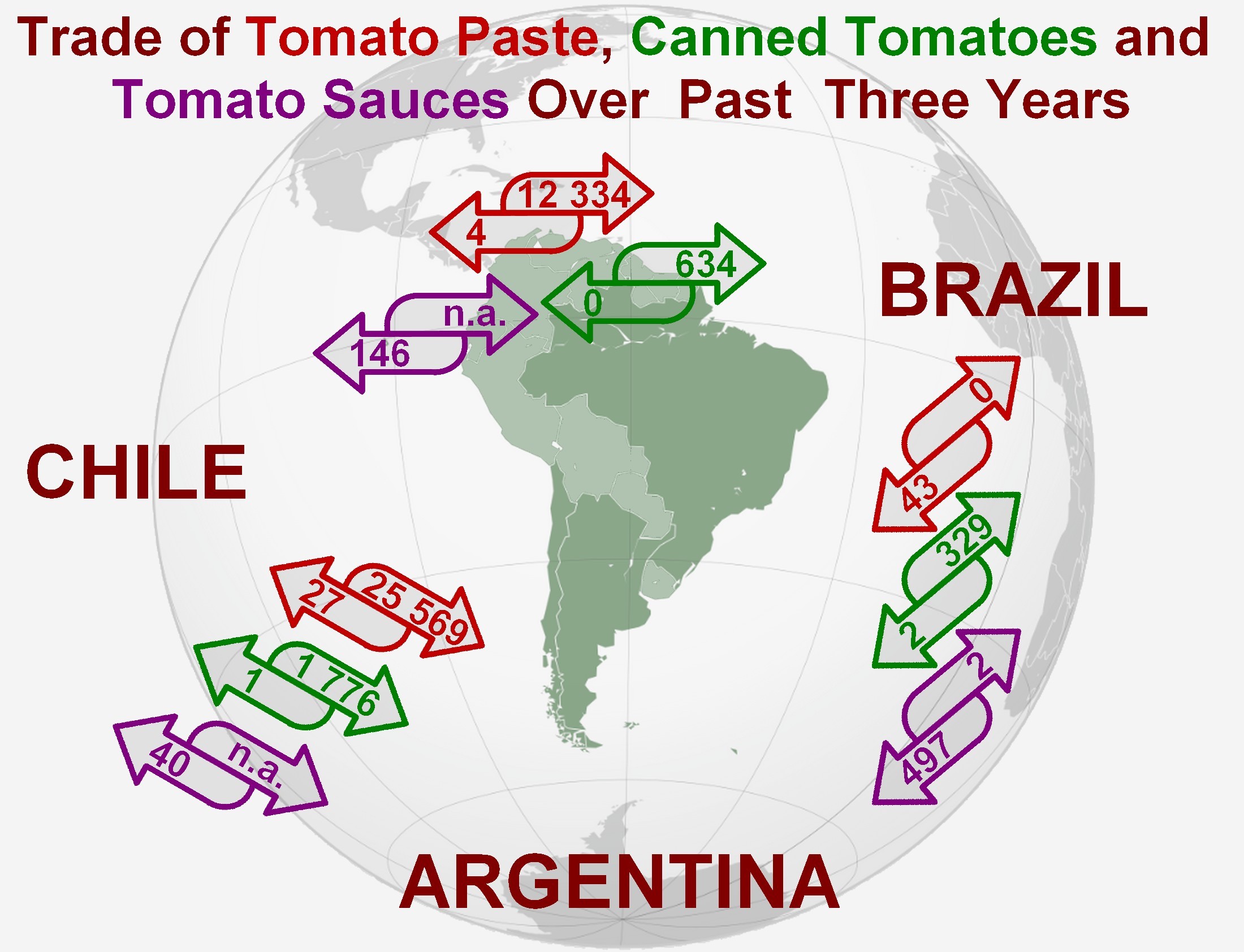 For the 2020 season, the Chilean tomato processing sector forecasts a sharp reduction in planted areas, at around 9 500 hectares, due to the severe drought that is hitting the country, with average agricultural yields being affected and being expected around 90 mT/ha instead of the 97 mT/ha recorded in 2019. According to forecasts communicated to the WPTC, production might not exceed 855 000 mT this year, which should decrease the quantities available for exports, and slow down the pace of development for the corresponding marketing year. 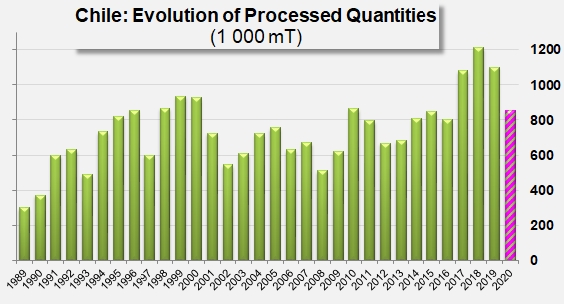 Some complementary data
Evolution of the Chilean Peso / US Dollar exchange rate over the past three years. 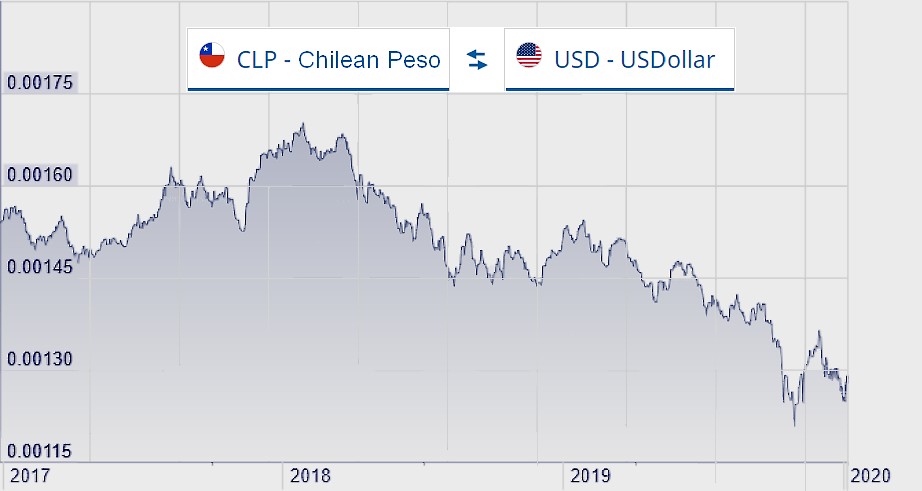